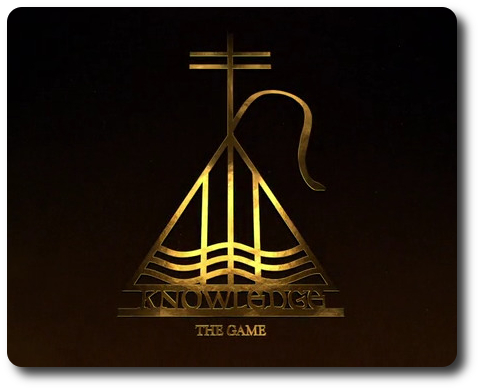 Some believe that the power of mages comes from an otherworldly place. This is only partially true. What makes a mage a mage is not the fireballs they throw in the air or the conjuring tricks. No. Knowledge of the arcane and what it’s capable of is what makes a true wielder of magic powerful. In this game, you will seek knowledge to crush your foes before they crush you.

Knowledge, designed and self-published by Kevin Larkins, is comprised of 5 standard six-sided dice, 15 Amethyst “Mana” stones, and 405 cards. The card illustrations depict fantasy creatures, heroes, and remote locations. As this is a review of a prepublished game, I cannot comment on the game component quality.

On Rocks and Paper

There are several different card types in the game. Each has a role to play, which is summarized here.

Mana is best thought of as a form of currency in the game. Buying cards is referred to as “Summoning”. Mana values depict both Summoning cost and power. Players begin the game with limited Mana at their disposal. 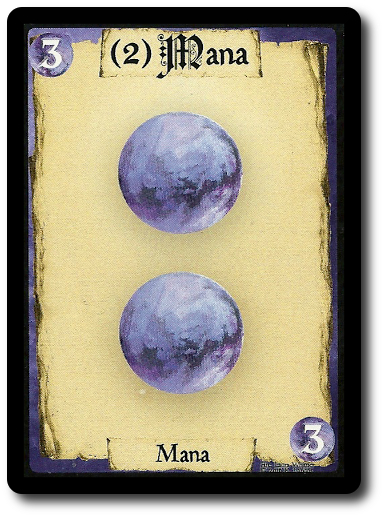 Each Mana stone is the equivalent to 1 Mana value. They are earned through winning battles, skipping summoning, and being provided by certain cards. Unlike the Mana cards, Mana stones must be spent as quickly as they are acquired, making them a useful – but fleeting – source of magical power. 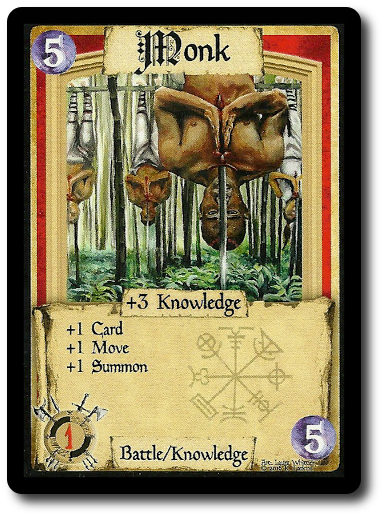 Item cards are similar to Move cards in that they give the player additional actions, but they can only be used once. Once the player uses them, they must be Trashed. 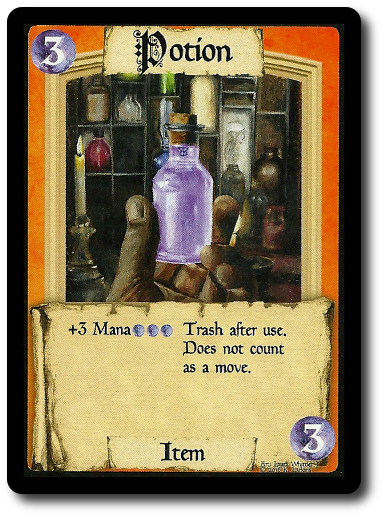 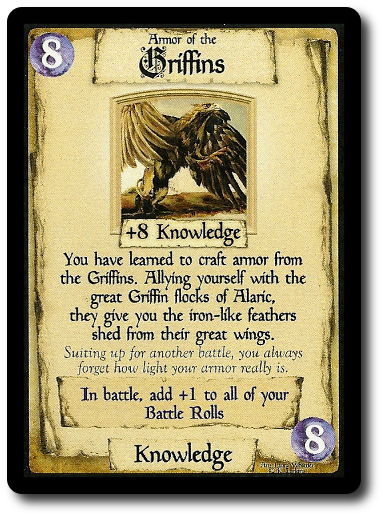 These cards are used to help keep the players’ cards organized.

If Knowledge is What You Seek…

To set up the game, first select 12 different piles (I suggest a 4 x 3 grid) of Move or Item cards in the middle of the playing area. These are the cards the players will be summoning during the game.

Second, organize the Mana cards into 3 different piles by their number value. Place the Trash, and Knowledge cards (per numbered pile) next to each other, along with the Mana stones.

That’s it for game setup (minus some smaller items not documented here). Time to see who can know the most the fastest.

Each player will have a starting hand of identical number of cards. A player’s turn is summarized here.

Play Move cards to attack, defend, and revive other cards in and out of play. Knowledge cards can also be played a this time. Only cards in the player’s hand can be played, but through the use of other cards, additional cards can be drawn. Where applicable, the outcome of card effects is determined by dice rolls.

Player purchases cards by way of summoning them using Mana. When they come into play, they can be used to further reinforce the player’s army or defend the borders. By default, only 1 purchase can be made, but again through the use of cards, the player may be able to buy more. Since the player has already used their Move step, anything summoned cannot be used to attack or take action on another player unless it explicitly states so on the card.

The player now discards all their cards in their hand and any in play that do not remain. Discarded cards are not lost. They will be shuffled and brought back into play many times during the game. The player then draws 5 new cards and announces their turn is over.

The game ends when all the 4 and 8 Knowledge cards have been summoned. Players now count up their total Knowledge points, including any on Move and Item cards that have not been trashed. The player who has the most Knowledge wins the game.

To learn more about Knowledge, visit the Kickstarter campaign.

The Child Geeks were able to grasp the basics of the game with ease, as many of them had played deck-building games in the past. According to one Child Geek, “Easy game to learn how to play, but you don’t really understand the game until  you’ve played it at least 3 times.” The Child Geeks speaks to the truth. You can learn all there is to play the game in a few minutes and spend the rest of the day playing different cards in different ways. Another Child Geek said, “The cards and what they can do is pretty cool. I don’t ever feel like I have a bad hand of cards.” In truth, it’s difficult to mess up a turn, but the level of impact the player has on the game is directly proportional to how well they build their deck. The Child Geeks caught on and started to work on various combos, making each game that much more difficult to win and that much more fun to play. The Child Geeks voted to approve the game.

The Parent Geeks also had zero issue learning how to play the game, but were not as proficient at making card combos as quickly as their younger counter parts. When I asked why, one Parent Geek said, “I’ve played deck-builders before, but I tend to play them once and then move onto another game. I just don’t have the kind of experience the Child Geeks have.” EXCUSES! When the Parent Geeks and Child Geeks played against each other, the Parent Geek held their own due to their years of experience, while the Child Geeks were able to maintain the line thanks to their intuitive sense of what cards worked best together. This made for some excellent game observation. When just the Parent Geeks played against each other, the games became less exciting, but never lost an intense feeling of competition. When the games were over, the Parent Geeks voted to approve Knowledge.

The Gamer Geeks acknowledged that Knowledge was a well designed game with some good ideas, but didn’t set itself apart enough to feel like a unique game in and of itself. According to one Gamer Geek, “This game feels like it has a bit of Magic and a bit of Dominion. Both good games, but this feels like a strange copy of the two.” The Gamer Geeks liked the buying and action, as well as the combat. None of it felt out-of-place, but they did question the level of focus on the move phase versus the summon phase. As one Gamer Geek put it, “The game is putting all of its eggs into one basket here. If you don’t like confrontation in your deck-building game, then I don’t think this game would be of much use to you.” After several games, the Gamer Geeks paused to reflect on what they found and experienced. In the end, half of the Gamer Geeks rejected Knowledge, finding it to be an unoriginal game concept. The other half very much enjoyed their experienced and moved to approve the game. This left Knowledge with a mixed level of approval from the gaming elitists.

The only aspect of the game made me feel like I wasn’t playing “yet another deck-building game” was the combat. Everything else about the game felt familiar and a bit tired, to be honest. To be fair, the method in which cards are drawn and redrawn is pretty standard, so I do not hold it against a game to use a rule or game mechanics that work and work well. But for someone like myself, who plays lots and lots of games, seeing the same thing again and again gets old. While many aspects of the game did feel wearily familiar, the combat system did not. Player can set up their cards to attack and counter-attack a number of times, making combat a deadly business. Fun and challenging combos are very possible for both sides who engaged in attacks and defense. This makes the battles much more than comparing card values and rolling dice.

Overall I found the game to be just OK. The rules are solid, but nothing special. The game play is solid, but again, nothing special. The only note worthy aspect is the combat, but not enough of that goes on in the game to make the rest of it shine. Here is a game that if you played it you wouldn’t be disappointed, but nor do I think you’d be particularly interested in digging deeper into it. It plays well right out of the box, delivers on its promise, and challenges players enough to keep them engaged. Again, solid. If you are looking for a solid game, then do give Knowledge a try.