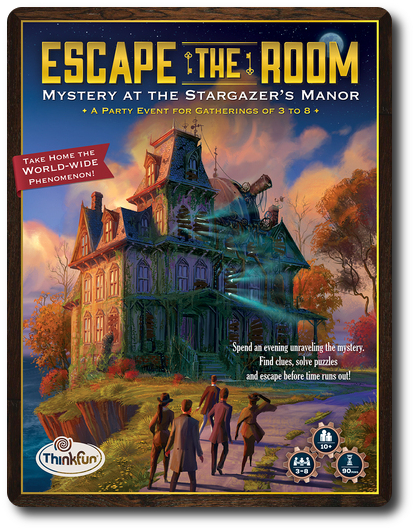 When the highly respected and eccentric astronomer lost his wife to a terrible accident, he retreated to his work and his manor. There he stayed hidden, a recluse in the small seaside town. Now strange lights at night are blinking from the manor’s windows and odd smells and dark smoke come from its chimneys. You are tasked to venture into the manor to find out what is going on. Just make sure you can make it out again.

Escape the Room: Mystery at the Stargazer’s Manor, designed by Rebecca Bleau, Nicholas Cravotta and published by ThinkFun, is comprised of 1 Scene card, 5 sealed Puzzle envelopes, 5 Secret items (inside the Puzzle envelopes), and 1 Solution wheel. The game comes sealed, meaning that after the first play, the owner of the game might want to reseal the Puzzle envelopes. A small task, but one worth mentioning. It’s also worth mentioning that an individual will only be able to play this game once. Once the Puzzle solutions are known, there is little point to play the game again.

To set up the game, first have all the players sit around a table. The table is necessary to spread out the various clues.

Second, get a timer (not included with the game). This will be used to stress the players out, as they only have so much time to solve each puzzle and win the game.

Third, make sure there are enough pencils for each player and plenty of paper. Notes and various ideas will be scribbled during the game.

Fourth, remove the Puzzle envelopes (DO NOT OPEN THEM) and the Solution wheel, setting these game components to one side.

Optionally, the mood could be set by decorating the room in which the game will be played in, sending each player a special invite, or playing some music. You might also want to consider providing internet access, so as to allow players the opportunity to view online hints for various puzzles.

That’s it for game set up. Time to solve a mystery!

Escape the Room is a party game. Players will be required to work together to solve increasingly difficult puzzles with a few clues to go off of. The game is both a mental and social exercise, requiring a great deal of thought and group participation. That being said, there are only a few rules to the game that govern play. Everything else is left to the players.

The objective of the game is to solve each of the puzzles in the scene order they are provided. While doing so, a story will unfold that provides a running narrative and clues to future puzzles. Thematically speaking, all the participants are trapped in various rooms in a mansion that once belonged to a well-known astronomer. Each puzzle, once solved, allows the participants to venture deeper into the mansion and the mystery. 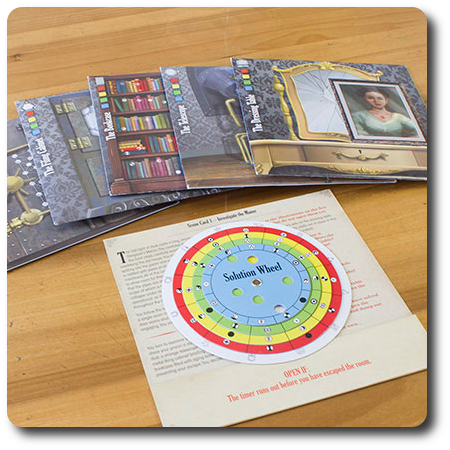 To assist in the player’s puzzling adventure, each Puzzle envelope has a Scene card and all the components necessary to help solve the next puzzle. Players will need to use their wits, smarts, and memory to solve each puzzle while working together. Some puzzles have hidden content!

The players win if they are able to solve all the puzzles within the given time. If the players run out of time, they have lost.

To learn more about Escape the Room: Mystery at the Stargazer’s Manor, visit the game’ web page.

The Child Geeks enjoyed participating in the game, but were never the solvers of the puzzles. According to one Child Geek, “I liked helping, but I also knew that if we were going to solve the puzzle, I had to let the adults do it.” The Child Geeks were strangely aware of the time left in the game, becoming increasingly stressed by it and visibly becoming less and less interesting in the game itself. As one Child Geek put it, “I like playing with everyone, but the game is stressful. I feel like I’m holding people back or I’m being pushed. I don’t like that.” If we were to track the Child Geeks’ level of interest and enjoyment, it would start high and peak around the second Puzzle. After that, it begins to fall and then plummet as the game progresses. While speculation on my part, I believe the cause to be the continued stress of losing time and the increasing difficulty of each puzzle. This results in a game that continues to grow in intensity and stresses the poor Child Geeks out. When the games were over, the Child Geeks voted to reject Escape the Room, finding it to be a game they couldn’t really play very well and felt too much like work.

The Parent Geeks were the complete opposite. They enjoyed the thrill of solving puzzles under a time crunch and seemed to relish the stress the game provided. According to one Parent Geek, “Good puzzles – challenging – and I like the game’s setting. I wish I could play this more than once.” Another Parent Geek said, “The puzzles are really abstract and I have a hard time understanding what is needed, but only at first. If you pay attention to the story and past puzzles, you have enough clues to work with.” While the game did not work as well as the Parent Geeks had hoped with the family, they had no problems enjoying it with their peers. The game was best enjoyed when it was just Parent Geeks at the table, while the Child Geeks were off playing video games or chasing each other around the house. When the puzzles were solved or the games were over, the Parent Geeks voted to approve Escape the Room.

The Gamer Geeks really liked the game’s concept, but disliked the fact that it was a onetime experience. According to one Gamer Geek, “I know I am in the minority here, but I don’t like games that can only be played once or are permanently changed based on previous game plays. I want my games to be replayable again and again. This one is not.” Another Gamer Geek said, “If you look at this game as a onetime experience and are OK with that, much like solving the mystery at a mystery murder party, then I think you’ll have a great time because it’s all about the experience, not the game.” The Gamer Geeks were mixed when it came time to provide their vote. Roughly half disliked the idea that the game could only be played once and voted it down as a result. The other half didn’t much care and decided to focus on the game itself. All the Gamer Geeks agreed that the puzzles were excellent.

This was a fun game to play, but it was also something of a disappointment. While I helped solve each puzzle and had a blast doing it with my friends and family, I also knew that I would not be doing it again. Escape the Room is a onetime deal. Each game can only be played once, especially if you solved all the puzzles. There is no thrill in being presented a puzzle you have already solved. This means that the game is pretty much useless to the owner and will most likely be given away or donated to Goodwill after it is played.

If you do decide to keep the game, repackaging it is a chore. Instructions are provided that assist in this exercise. Unfortunately, the instructions are only online, meaning what should have been part of the game is not included in the game box. I’m sure there is a sensible reason for this, but I would have preferred the information be offline and made available right from the start. Even a downloadable PDF would have been nice. Then I could add it to the game box myself.

What we are left with is a game that provides a unique and intense experience. It will create a lot of memories and be discussed again and again, providing the game’s host and its players with joy and excitement long after the game is over. The negative side is that the game, once over, is over. Forever. Escape the Room is a onetime adventure which creates its own challenges and brings to the table a different kind of stress. That being, specifically, the stress of getting it right the first time, because there are no second tries. Do try Escape the Room at least once, because you can’t try it twice. If you like it, seek out other games in the series and test your mental and social might.

One Response to Escape the Room Game Review