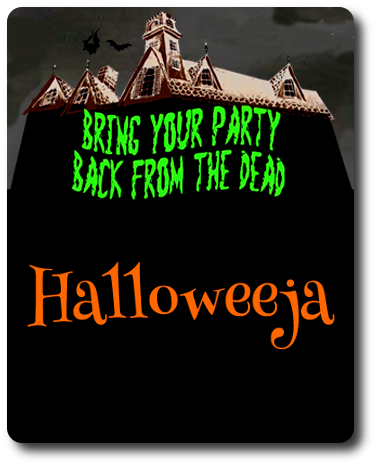 Ouija boards, also known as “Spirit boards”, are believed by some to be a tool to communicate with the dead. Some also believe that the Ouija is capable of opening up doors that should not be approached. Regardless of your personal belief, one thing is for certain. Ouija boards continue to be popular in our culture, be it in movies, stories, or sleepovers. In this game, you’ll make use of a Ouija board to learn secrets and, if played with the right people, have fun.

Halloweeja, designed by Sheldon Boyarski and published by Scavenger Eye Studios via the Game Crafter, is comprised 1 Halloweeja board (double-sided), 53 Creature cards, 1 paper notepad, 4 pencils, 26 Letter pieces, 75 Password pieces, 10 Pumpkin pieces, 1 Halloweeja Book of Hijinks, and a small collection of extra parts. The board is actually a large piece of thick card stock with a big crease down the middle (unfortunately). The cards are as thick and as durable as your standard playing cards. The pieces are made of thick card stock, as well.

To set up the game, first decide which side of the Halloweeja board to use and place it in the middle of the playing area. One side contains helper lines to assist new players in understanding how pieces travel across the board. The other side does not. It’s purely a question of preference, as the side of the board used has no impact on the game. 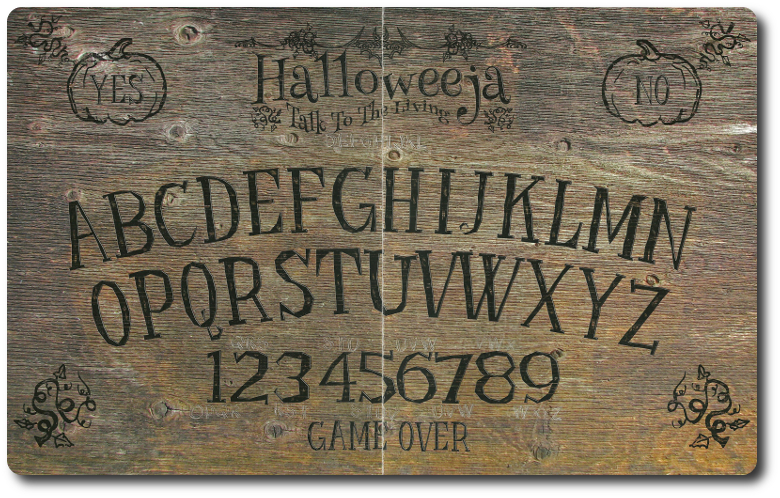 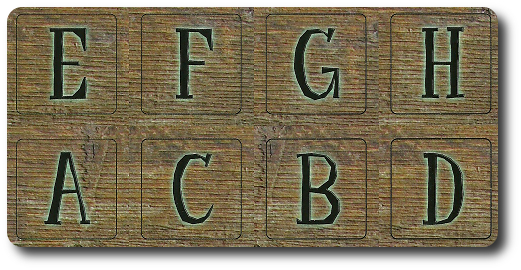 That’s it for game set up. Time to see if we can have a ghoulishly good time.

Fun in the Cemetery

Halloweeja is played in turns with no set number of turns per game. During the game, players will take on the role of the Questioner and the Reader. Creature cards can also be used at anytime during a player’s turn, be it there’s or someone else. Unless specifically stated when a card can be played, it can be played at anytime. 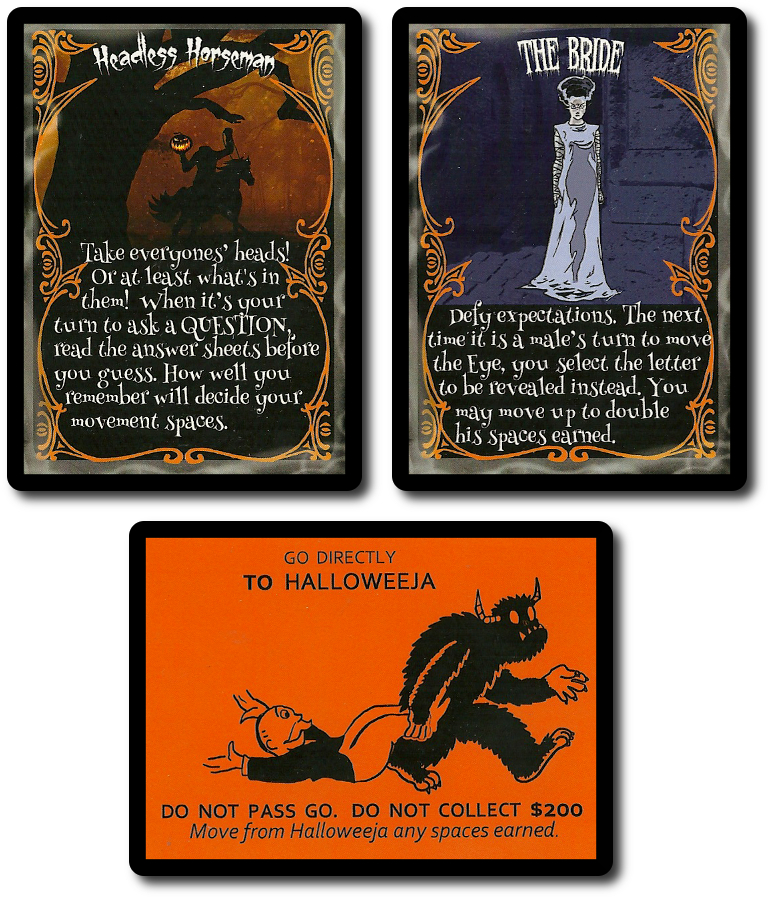 The turn’s Questioner consults the Halloweeja Book of Hijinks for monster themed questions to ask the rest of the group. A few sample questions follow.

Step 3: Read the Answers and Guess the Player

The Reader now reads out loud all the answers once and then reads each one again in turn, asking the Questioner who wrote the answer. The Questioner points to the player who they think is the owner and the accused player answers “Yes” or “No”. If “Yes”, the player places their Pumpkin on the “Yes” spot on the Halloweeja board. If “No”, the player places their Pumpkin on the “No” space. Either way, the Reader then gives the player back their answer.

This continues until the Reader has read all the answers and the Questioner has attempted all the guesses. Due to the process of elimination, the Questioner will always get at least 1 answer correct.

The Questioner now moves the Eye on the Halloweeja board a number of spaces equal to the number of correct (“Yes”) answers. They can move the maximum number or less, traversing the letters on the Halloweeja board using a set movement track. When they decide to stop on a letter, the Letter piece is taken and placed in an area that indicates that the Letter piece is now selected. If Letter pieces have been selected previously, the new piece joins them.

Creature cards may change the number of Letter pieces that can be taken and the normal movement rules.

This ends the game turn and the Reader now becomes the Questioner.

To learn more about Halloweeja, visit the game’s web page on the Game Crafter.

The Child Geeks enjoyed the game’s theme and the guessing aspect of attempting to determine who provided silly answers. Guessing the password of others and attempting to craftily create their own with the Letter pieces was a secondary concern. That is to say, the Child Geeks truly did have a party with the game, enjoying it to a point where the game itself became a minor concern. According to one Child Geek, “The best part of the game is attempting to guess who said what.” Another Child Geek immediately interrupted and argued, “No it’s not. The best part of the game is writing the funniest answer you can do!” Both Child Geeks continued to argue, but ultimately agreed that both of them had valid points. Another Child Geek said, “I like how you have to figure out what the other people’s passwords are, but it’s not really all that important. You just need to be sneaky when trying to spell your own.” Very true! When the games were over, the Child Geeks all agreed they had a great time.

The Parent Geeks also found Halloweeja to be spooktacular. According to one Parent Geek, “An enjoyable family and party game. I think it’s interesting that everyone is always getting letters at the end of every turn, so you have to be careful about what you put out there.” Another Parent Geek said, “A fun party game to play around Halloween! I think the best part of it is the guessing of who wrote what.” To which a childlike voice yelled from the other room, “No! It’s not!” The Parent Geeks found Halloweeja to be fun with both adults, kids, and the mix of the two. The games were always the same in regards to tempo and competition, but with kids the game took on a sillier aspect that made even the most stern-faced Parent Geek smirk a few times. When the games were over, the Parent Geeks voted to approve Halloweeja.

The Gamer Geeks were not all that impressed with the game. According to one Gamer Geek, “Here’s the thing. As the game progresses, Letters keep coming out. Not necessarily the letters you want or need, but most certainly those that will benefit at least 1 player. You can’t stop it and that’s what makes it a game I don’t care for. I can do nothing but play Creature cards to slow people down and hope that others don’t get their password before me. I don’t feel it’s a game I really have control over.” Another Gamer Geek said, “A fun game for casual players and those who are not familiar with lots of games. I’d play this with my family and a few friends, but never with my regular gaming group. When the votes came in, the Gamer Geeks decided that Halloweeja was not a game they found particularly “terror-ific”.

I’ve made a lot of horrible puns in this review and I’m sorry about that.

Halloweeja is a good mix of theme and game play, with both blending together to create a casual game playing experience. The game is not particularly challenging and focuses more on player interaction than strategy or tactics. It’s the lack of depth in the game that turned the Gamer Geeks off, but served to make it highly approachable and enjoyable with the Child and Parent Geek crowds. It’s true what they say: you cannot please everyone all the time. In this case, the game pleased the majority, but not the entire collection of geeks.

My favorite aspect of the game was the fun to be had with the Creature cards and the interaction it allowed with the players. There is a lot of talking going on in the game, both on the side and with the group. Players are not discouraged to share what they know and the entire game itself encourages communication and fellowship. Also monsters. It makes for a fun game playing experience, but only if you are playing with people you enjoy spending time with. The game can run a little long.

If you are looking for a Halloween themed or monster themed game that is family friendly and perfect for casual players, look no further than Halloweeja. It won’t scare you to death, but it will certainly put a delightful tingle down your spine.