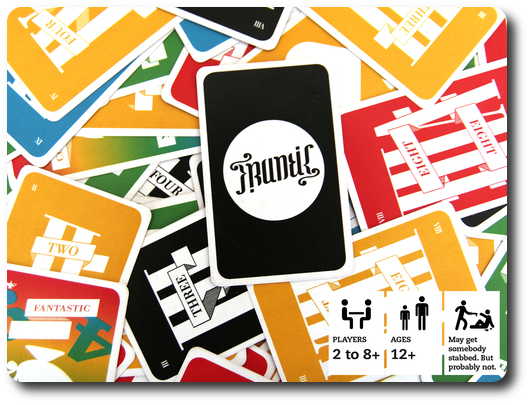 American singer, songwriter, and musician, Mary Chapin Carpenter, said “It’s a pretty frantic world that we live in.” Indeed it is. It takes energy to slow down and smell the roses that are primarily blurs out of the our peripheral vision. But being frantic is not always bad. It’s a rush to propel yourself forward and meet your goals ahead of schedule. In this game, the cards you play will be fast and furious. Mostly furious.

Frantic, designed by Fabian Engeler, Pascal Frick, Pierre Lippuner, Stefan Weisskopf and published by Rule Factory, is comprised of 125 playing cards and 20 Event cards. The cards are as thick and as durable as your standard playing card.

Note: This game contains a small number of cards that display strong adult language, reproduction, and alcohol. These cards can be removed from the game without upsetting the game’s play or balance. This makes it easy to adjust and create an appropriate game playing experience for Child Geeks and overly sensitive adults.

Frantic is played in rounds and turns, with no set number of rounds per game.

If the player elects to draw a card, they draw the top-most card from the draw deck and add it to their hand. If it is possible to play the drawn card to the discard pile, the player may optionally do so now.

There are several different types of cards in the game. Depending on what card is face-up in the discard pile, any or none of the cards in the player’s hand can be played to it. Each of the card types are summarized here. 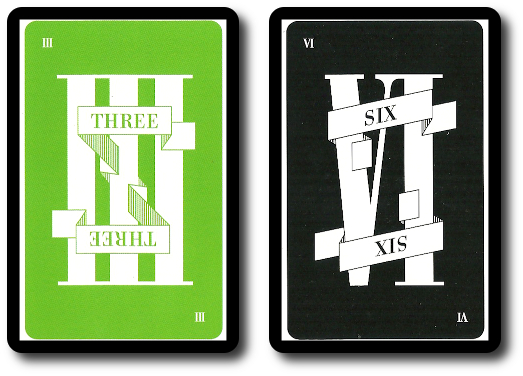 Special cards are either colorless (can be played to any colored card) or have a specific color that must be matched before played. Special cards trigger an effect that immediately takes places and must be resolved before the game progresses. Examples include “Equality” that forces an opponent to draw up to a matching number of cards in their hand as the player and the ever popular “Fuck You” that locks a card in play that must be used until the Special card is dismissed. 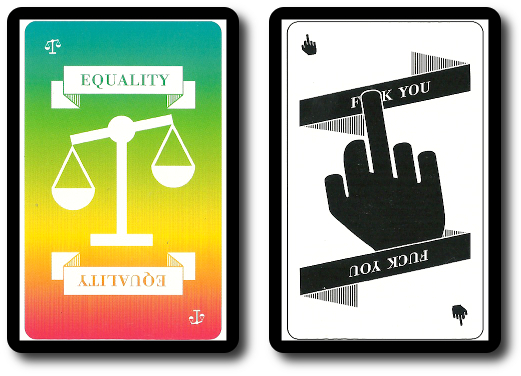 Event cards are drawn whenever a black colored card is played. The top-most Event card is drawn and resolved. Events include “Earthquake” which forces players to give their current hand to the opponent on their right and “Doomsday” which automatically ends the game and gives all players 50 additional points. 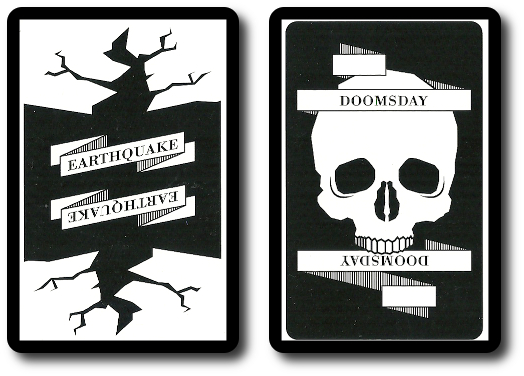 The round ends when a player has discarded their last card in their hand or the draw pile is depleted. Due to Events, it is possible for 2 or more players to end the game simultaneously.

Players now count the total number of cards still in their hand, receiving different number of points per card type. This number is recorded for the round and added to any previous rounds. A new round now begins.

The game ends when a player has earned a number of points equal to or greater than a set score. This player ends the game. The player with the fewest points wins the game. Ties are broken with a fist fight.

To learn more about Frantic, visit the game’s web page.

The Child Geeks started out liking the game but then began to split into two camps. One camp believed the game was full of fun and frantic card plays (thus all collectively agreeing that the name was aptly titled). What they enjoyed most was the random Events and the Special cards that kept everyone on their toes. Even a player with only a few cards left to play didn’t have a stronger chance of winning than the poor kid who had a handful. According to one Child Geek, “This game plays a lot like Uno but it also has things that keep changing the game, not just the cards. It’s a lot of fun to play!” The other camp disliked the game for all the same reasons the others liked it. According to one such Child Geek, “The game takes too long or is too short, too many thing can happen that make it difficult to play, and I cannot stand it when I get punished in the game and I cannot avoid it!” When the games were over, the Child Geek vote was split right down the middle.

The Parent Geeks found the game to be a healthy mix of frustration and fun, laughing some of the time and growling at others. None of the Parent Geeks were happy with the “Fuck You” card and few other cards that they found to be either inappropriate or flat-out rude. Turned out not to be a problem, as these cards were easily removed and the game play didn’t suffer for it. According to one Parent Geek, “I don’t see why it’s necessary to swear in a game, but I like that I can just remove and even throwaway the card and still play the game.” Another Parent Geek said, “The game is fast but it keeps you thinking. It felt strangely slow at times, too, but I think that’s more related to lack of progress or feeling of pressure in the game to obtain a victory.” The Parent Geek makes a good point. Players will lose and gain cards constantly in the game. Sometimes it can feel like for every 1 step forward, the player is taking 2 steps back. When the votes were in, the Parent Geeks found no real faults with Frantic that they couldn’t easily correct resulting in a vote of approval.

The Gamer Geeks were not impressed with Frantic. According to one Gamer Geek, “The game lacks any real originality, is clearly built of the idea of Uno and Fluxx, and doesn’t produce a game playing experience that feels rewarding. I’m giving this one a pass.” Another Gamer Geek said, “It’s always sad to play a game that has no originality or is just a collection of various ideas that have already been had.” The Gamer Geeks couldn’t find anything wrong with the game play other than they simply didn’t care for it. They also noted that the game seemed to be acting as a “bad boy” with the “Fuck You” card and various other cards, but the attempt fell flat. As one Gamer Geek put it, “It’s not very badass. It’s just bad.” None of the Gamer Geeks found Frantic to be a game they particularly enjoyed and voted to reject it.

The effects of the cards are very diverse, offering players many different ways to alter that game play on their turn. While this always keeps the game moving in different directions, it also causes chaos and sometimes confusion. With the ever-shifting game play and subtle alterations of what cards can or cannot do on your turn, the game takes on a life of its own. A simple exercise of matching colors and numbers is no longer straightforward. This caused our Child Geeks some grief and eventually lead them to either loving or greatly disliking Frantic. Mostly due to nothing really feeling stable or predictable. For the Parent Geeks, this turned out to be a lot of fun. The Gamer Geeks, in their elitists wisdom, saw the entire game as little more than the freakish offspring of Uno and Fluxx. Two games they feel rather negatively passionate about.

My biggest gripe against the game is lack of card text that explains how the card is used. With a total of 30 different cards that alter the game play, none of them actually describe “how” they affect the game. A player must refer to the game rules each and every time they want to learn about a card or cards in their hand. This slowed the game down until players memorized the cards, but it always felt like a big missteps. If you are going to have a game that is only played with cards, keep the players looking at the cards. Don’t make them shift their attention to a rule sheet that is constantly passed around the table like a hot potato.

As for me, the game is entertaining and forgettable. It does what it needs to do very well and then sits back on the shelf to collect dust. It’s not that the game play is bad, it’s just too simplistic. Draw a card (or don’t) and then play a card (or don’t). Again and again until you don’t have any cards to play. There are many card games that have the same goal and I have a very hard time remembering their names.

So that leaves us with a game that isn’t bad, but won’t be on the top of your list. It’s fun with the right group and can be easily modified if certain cards are deemed inappropriate. While the game play is simple, meeting the objective can be an exercise in patience and frustration. Try this game if you like what you’ve read, but I don’t think you need to be frantic about it.

One Response to Frantic Game Review