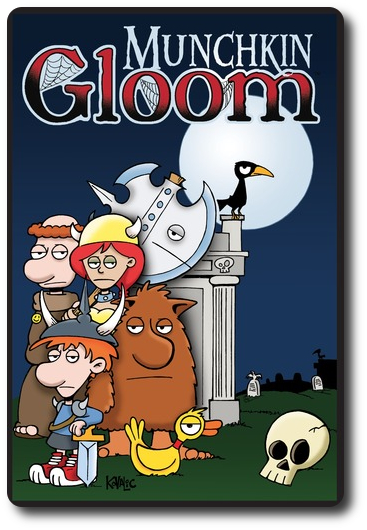 Some believe that the more you suffer in this world, the more deserving you are of a happier afterlife. That is to say, pain now equals gain later. If such is the case (and I’m not suggesting it is), then the characters in this game will certainly find the Great Hereafter to be filled with uncountable pleasures and delights. Prepare to suffer and be happy about it.

Munchkin Gloom, designed by Keith Baker, Andrew Hackard, Steve Jackson and published by Atlas Games, is comprised of 110 cards.  The cards are not as thick or as durable as your standard playing card, so be careful with them. While Munchkin Gloom is a game in and of itself, it’s compatible with any other Gloom game, making it both a base game and an expansion game. It’s not compatible with Munchkin. Artists Jaume Fabregat and John Kovalic have done a wonderful job of capturing the lighthearted comedic spirit of Munchkin and twisted it to match the abysmal darkness of Gloom. Dark humor at its finest.

Clarity is the Key to Your Doom

Munchkin Gloom uses a unique transparent card system. Each card stacks on top of another removing old values and providing new ones. The cardinal rule of Munchkin Gloom is “pay attention to only what you see”. This means old values and bonuses can quickly be replaced by a new card that overlays and replaces old values.

In total, there are four different types of cards. These are as follows:

Character cards are the basic foundation on which everything is built. They lack the necessary points to win or lose the game, but are the central target of focus for the game’s entirety. Modifier cards are stacked on top of Character cards.

Event cards are played from the player’s hand, resolved, and then discarded if applicable. They do not stack on top of Character and Modifier cards.

Untimely Death cards end the life of living Characters. They can only be played on Characters who have negative Self-Worth values. Once a Character meets their demise, they are set to the side and out for the duration of the game until final scoring. 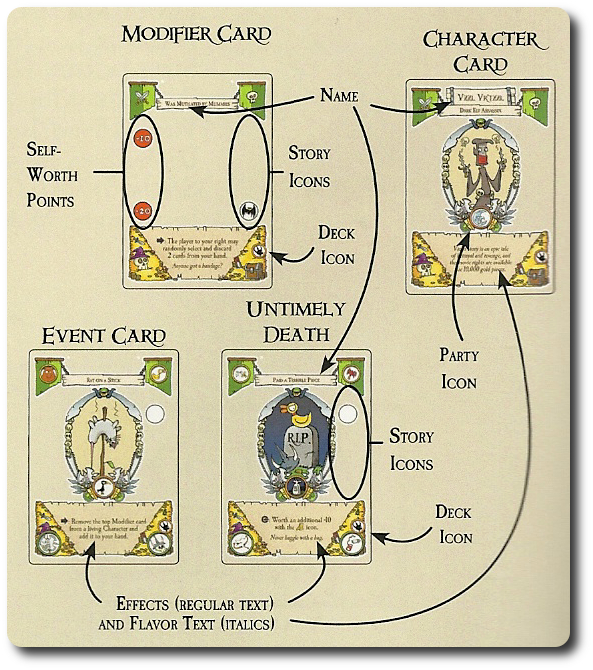 To setup the game, have each player chose one Party (based on symbols) and then discard 1 card of their choice. If playing with 5 players, the discarded cards form the fifth Party. The cards kept are played in front of the player in a row, face-up, and visible to all opponents.

Second, shuffle the remaining cards and deal 5 cards to each player, face-down. Players should look at their cards, but keep them hidden from opponents until played. Place the remaining deck of cards to one side of the game playing area. This is the draw deck for the duration of the game.

That’s it for game set up. Have each player, in turn, summarize the misery their party has suffered so far on their adventure. The player with the most miserable story is the first player.

Trials, Tribulations, and Treasure to Die For

Munchkin Gloom is played in turns with no set number of turns per game. On a player’s turn, they will take 2 actions. Actions are almost always focused on playing cards to your own Party, but can also include playing cards to an opponent’s Party. Which is to say, negative cards are always played to the player’s Party and cards that create a sense of happiness are always played to the player’s opponent party. Actions include the following:

After taking 2 actions, the player draws back up to 5 cards. The draw limit may change for a player during the game. Some cards are played as soon as they are drawn. In which case, the player resolves the card and DOES NOT draw a new card to replace it.

This ends the player’s turn unless the player is awarded additional “free plays”. The next player in turn order sequence now goes.

The game ends as soon as all the Characters in one Party are dead. Each player now totals their Self-Worth scores of their dead Characters (which is the sum shown on the stack). The player with the LOWEST total has the most miserable party, but is the winner of the game.

The Child Geeks found the entire doom and gloom aspect to be both funny and twisted. According to one Child Geek, “I didn’t know what to make of the game at first. I mean, I’m trying to kill my characters. I still don’t know what to think, but I’m having fun.” In fact, the game’s premise was difficult for the Child Geeks to first grasp due to its complete opposite agenda. While many games are about surviving, Munchkin Gloom focuses on perishing in the most painful and pitiful way possible. That took some getting used to, but once the Child Geeks understood the game’s direction, they started killing off their character’s like the black plague. As one Child Geek put it, “I had no idea it was so much fun to kill off your party – one by one – and help your opponents survive another day.” Fun, indeed. So much fun that the Child Geeks all voted to approve Munchkin Gloom.

Parent Geeks who were not familiar with Gloom, but were familiar with Munchkin, loved the game. Likewise, Parent Geeks who were familiar with Munchkin, but not Gloom, enjoyed themselves. Turns out the mix of the two games bridged the gap between two different groups of Parent Geeks. Those “who had played” and those “who had not played”. The end result was an enjoyable gathering of players who were both familiar with the game and not, but everyone was equally excited to play. According to one Parent Geek, “I like this game. It’s humorously dark and wonderfully dreadful. I can’t help but laugh maniacally every time I make a Party member suffer or bring sunshine to my opponent’s Party.” Another Parent Geek said, “A neat twist on the traditional approach to games. I like Munchkin and am pleased that this game feels nothing like it.” When the votes were in, the Parent Geeks voted to approve Munchkin Gloom.

The Gamer Geeks were mixed. According to one Gamer Geek, “There is nothing new here. This is Gloom with the Munchkin game universe slathered on top of it. I don’t feel like I’m playing a new game here.” Another Gamer Geek said, “I live Gloom and I like Munchkin in very small doses, but combining these two neither improves or harms the game play. It’s just a pasted on theme on an almost themeless game.” None of the Gamer Geeks found the game poorly made or poorly played, but didn’t care for it all the same. But not everyone. There were a number of Gamer Geeks who found the mixing and matching of the world of Munchkin with the dreary world of Gloom to be an excellent blending of the dark and the dorky. According to one of these Gamer Geeks, “Nothing new here, but boy, I like me some Munchkin and Gloom! Now I can get both in with one game.” When the votes were in, the Gamer Geeks gave Munchkin Gloom a mixed review.

In truth, Munchkin Gloom brings nothing new to the table if you are familiar with Gloom. Additionally, those who like playing Munchkin will find that Munchkin Gloom is nothing like the game they are looking for. This is Gloom with Munchkins and little more. But that in and of itself is not a detractor. Rather, it was found to be a real positive by the Parent Geeks who had groups familiar with both games. I think the real draw of the game comes from its ability to appeal to two large player bases. Those who play Gloom and those who play Munchkin. A simple theme it might be, but sometimes all it takes to draw a crowd is an interesting pitch. Look at Sharknado, for example. A very dumb movie that will literally make you dumber if you watch it. It’s about sharks in a tornado. Yes, I know. Now you want to see it. It’s theme is irresistible and I do not judge you. I’ve seen the damn thing 4 times. I’m fairly certain a sizable chunk of my brain is dead.

Game play is simple and fast, making Munchkin Gloom a good game for fillers or a family get together. The way you “skunk” your opponent is being nice to theme, which reduces the tension, but none of the fun. While I will stop short of saying Munchkin Gloom is better than either of it s namesakes, I can state that it’s a fun blending of the two.  Do give it a try if you are a fan of either game. Odds are very good you’ll end up loving it to death.