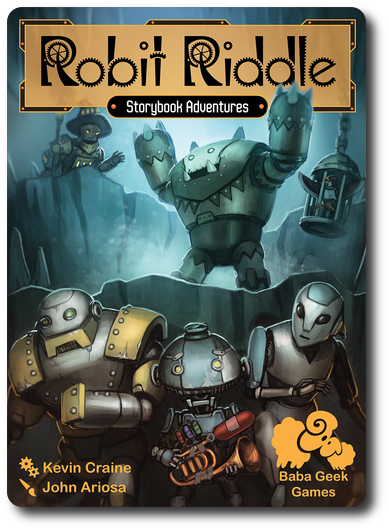 In Tink Town, everything is built to order. From the car to the road, from the yard to the house, and from the robot to the robit. What’s a robit you ask? Why it’s the greatest companion a robot could ask for. That’s why the town fell into gloom when all the robits went missing. But a few robots want their friends back and are willing to do whatever it takes to find them!

Robit Riddle, designed by Kevin Craine and to be published by Baba Geek Games, will reportedly be comprised of 3 Storybooks, 6 Character cards, 4 Location cards, 6 Ally cards, 6 Adversary/Robit cards, 6 Trap/Item cards, 15 Story tokens, 45 Story Cue cards, 30 Initial Cue cards, 1 Bookmark, 5 Encounter dice (custom six-sided dice), and 1 Story die (custom six-sided die). As this is a review of a prepublished game, I cannot comment on the game component quality. Artist John Ariosa has done an outstanding job of capturing the characters and the world they live in, making it easy to visualize the action and the story in the mind’s eye.

Robit Riddle is a storytelling game wherein the players get to make decisions and guide the story’s progression. Each player takes on the persona of a robot citizen of Tinker Town. Life is idealistic and peaceful in this small town where gears turn and steam chugs to keep the town and its populace moving. Each player’s character has a pet referred to as a “robit”. Sadly, all the robits have gone missing! This is where the players come into the story.

Each Storybook will provide some of the answers, but not all. In addition, each Storybook will return some, but not all, of the missing robits. This is a game about finding answers which leads to finding the beloved missing pets. In order to progress, the players must become storytellers and active participants in the story. Along the way, the players will encounter friendly and unfriendly robots, discover strange lands, overcome dangers, and discover the truth about their missing robits. The journey is one of exploration and creativity.

Each Storybook is built around the “pick-a-path” model. Wherein, players will be asked to make a choice. The story progresses based on the decisions made by the players. Characters will be threatened, rewarded, taken off course, and placed on the right track based on the choices the players’ make. In a very real way, the character in the story owes their fate to the players’ and how much they are paying attention.

Tell Me a Story… 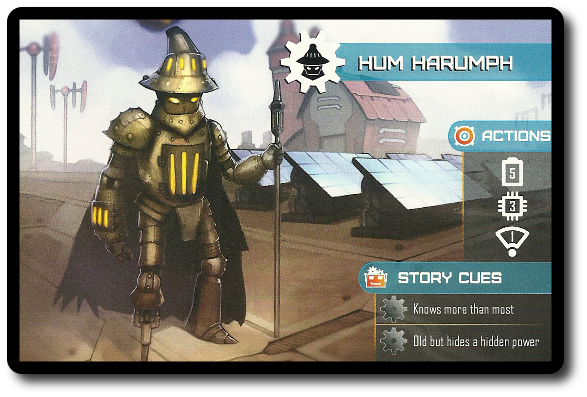 Second, shuffle the Initial Cue cards and deal 1 to each player with the Story cue face-up. These cards provide hints and tips to the players.

Fourth, group the Encounter cards first by color and then by icon. Organize them into rows so the names of each card are visible. Do the same with the Location cards.

Fifth, order the Story Cue cards by their number value and place them face-down to create the Story Cue draw deck. These cards are like the Initial Cue cards, but are revealed during the game.

Sixth, select 1 of the 3 possible Storybooks to read from. Give this book to one player who is referred to as the “Leader”.

That’s it for game set up. Let the adventure begin on page 1.

A Hero is Not Born, They Are Made…

The game is not played in rounds or turns, but rather read, discussed, and shared as a group. When the Storybook introduces locations, encounters, and calls for certain actions, they are resolved as a group, as well. 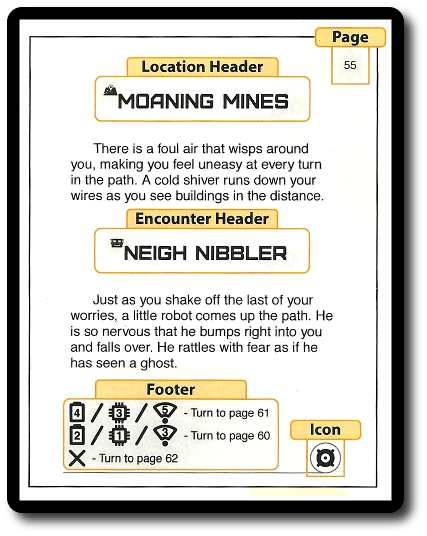 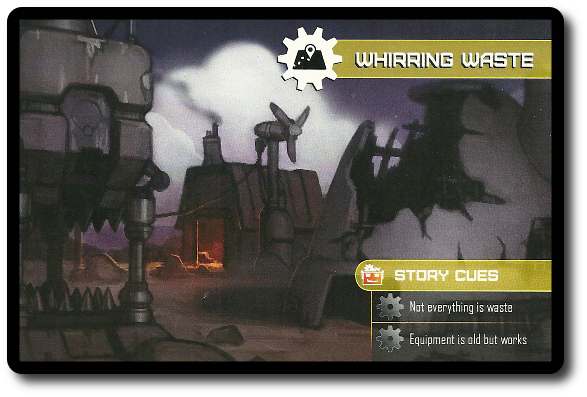 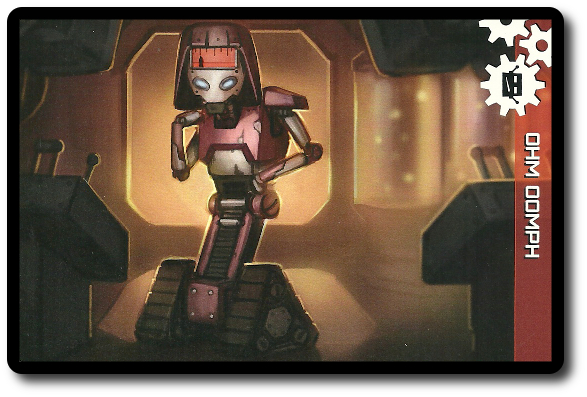 The choices the players’ can make are listed at the bottom of the page in the Storybook. These are read out-loud by the “Leader” and the players discuss the best course of action, eventually agreeing on a choice. Once agreed upon, the players turn the page to the one noted by their selected choice and continue the adventure. When reading a page, it’s resolved immediately. Any benefits earned or penalties gained are recorded.

While the Leader player will change as the game progresses, the current Leader will sometimes have to compare stats against an action or a non-player character. Stats are broken down into three categories. These are Battery (power and inner strength), Processor (intellect and wisdom), and Scanner (communications and observation). Unless specifically stated, any of the three stats can be used to overcome obstacles.

Then a number of dice are rolled equal to the stat value selected. Rolls will result in a success, a miss, or a Story token. Story tokens represent knowledge, luck, and hidden success. They are collected by the players during the game and can be used to change the story, provide benefits, and even change dice rolls. With a Story token and the Bookmark, a player can even warp back in time to a previous page in the story and make different choices. They can only be used once per game, but Story tokens are powerful indeed.

When the story comes to an end, so too does the adventure, but not the quest. The players have just started their journey and there are many different paths to take. SAVE THE ROBITS!!! 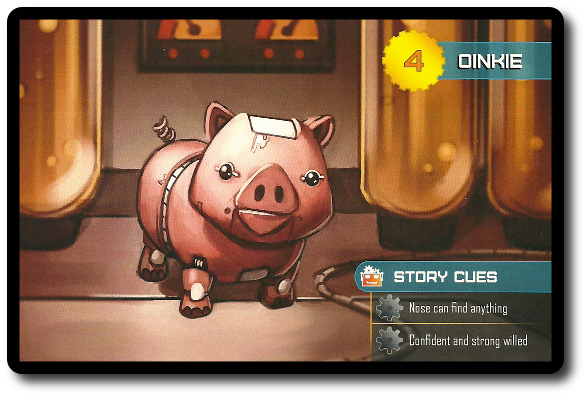 To learn more about Robit Riddle, visit the game publisher’s website or visit the Kickstarter campaign.

The Child Geeks were immediately sucked in and loved every minute of their Robit Riddle adventure. The game is one part roleplaying and one part active reading participation using the pick-a-path approach. This served to created an excellent introduction to role-playing for the younger and inexperienced players and kept everyone involved, since the story depended on their input to proceed. According to one Child Geek, “The story really grabs you and you feel like your part of it.” Another Child Geek said, “I really like the artwork. I could easily imagine all the characters we encountered and talked to.” Best of all, the game sparked an interest in learning more about roleplaying games and how far the Child Geeks could take their adventures. The biggest disappointment for this young crowd was the lack of additional stories (we were only provided one Storybook for the review). Regardless, all the Child Geeks voted to approve Robit Riddle and looked forward to more adventures to come.

The Parent Geeks were a mixed group. For those with older Child Geeks, Robit Riddle provided little in the way of entertainment or challenge. According to one such Parent Geek, “The game is good, but it’s like trying to entertain your teenager with a kid’s toy. It just doesn’t work because they’ve outgrown it.” But for those Parent Geeks who had younger Child Geeks, Robit Riddle was the next best thing to Dungeons & Dragons. As one Parent Geek put it, “I’ve been looking for a long time for a roleplaying game I could play with my kids, but all of them are too long or too complex. This game is the perfect mix between a role-playing and story time with the kids!” The real magic occurred between Parent Geek and Child Geek when they worked together to overcome obstacles. Since everyone is a player, everyone gets to enjoy the game together. This created many wonderful and rememberable moments for the Parent Geeks making Robit Riddle a hit for the younger families.

The Gamer Geeks were impressed with the game’s design and artwork, but didn’t feel that it was a game intended for serious gamers or serious role-players. According to one Gamer Geek, “I think this is perfect for the younger generation of geeks and their families. An old Gamer Geek like myself doesn’t find much in the way of challenge or interest in what you are showing me today.” Another Gamer Geek said, “I wish I had something like this when I was a kid. Why are all the kids nowadays getting all the really good stuff? I bet they don’t appreciate it even as half as much as I do.” Obvious bitterness aside, the Gamer Geeks all agreed on two very important points. First, Robit Riddle was a solid roleplaying game, with a good mix of storytelling and decision making. Second, the game was not for them.

Robit Riddle combines the joy of storytelling with the thrill of role-playing in a way that provides a seamless adventure at the table. All that is needed is an imagination and the ability to read. But even the ability to read could be somewhat excused if players are willing to read for younger players who are not yet up to the task. This results in a game that can be played by families with young Child Geeks who want in on the gaming adventure. Better yet, there is very little setup and the game’s rules are so light that you can read them once and be an expert.

Brilliantly, the adventures are nonlinear. They may always start the same, but through different decision making, rolls of the dice, and various outcomes, a single Storybook provides many different possibilities. Even when one path comes to an end, the players need only start over to find a new path that provides fresh choices to ponder. This is the game’s greatest strength, in my opinion. By passing the book around, each player becomes the “Leader” and helps make major decisions. When the Leader changes, so too does the game’s pacing. Some Leaders are aggressive and some like to play it safe. Who the Leader is has an impact on the final outcome.

I very much enjoyed Robit Riddle and, like the Gamer Geeks, wish this little gem was around when I was a kid. This is a great introduction to roleplaying games and a wonderful adventure for family and friends. Do play this game when time permits and get swept away by the story that you help create.