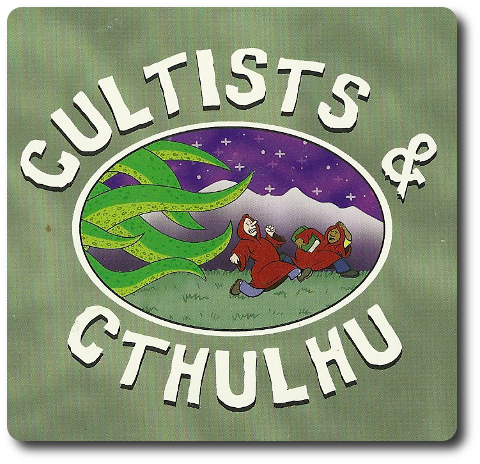 Men foolishly believe they can summon ancient gods and chain them to their will. The very thought is insane! Luckily, insanity is a major component of most cults. Sounds bad, but cults have incredible benefits and an outstanding 401k. Too bad no one ever has a chance to use them. Most end up being eaten or worse. Yes, there are worse things than being eaten alive.

Cultists and Cthulhu, designed by William Sininger and published by Prolific Games, is comprised of 94 Cultist cards, 35 Ritual cards, 25 counters and 7 standard six-sided dice. The cards are as thick and as durable as your standard playing card. The counters are made of semi-thick cardboard. Artist Steven Robbins has done a great job of capturing the seriousness of the Old Ones in a very comical way, making each card a geeky punchline to laugh at.

Prepare for the Ritual!

To setup the game, first separate the Cultist cards from the Ritual cards to create a Cultist card deck and a Ritual card deck. Shuffle both decks and place them face-down in the middle of the playing area.

Third, place the dice and counters to one side and where they can be easily reached.

That’s it for game set up. Time to summon the Old Ones!

Cultists and Cthulhu is played in turns. A player’s turn is summarized here. 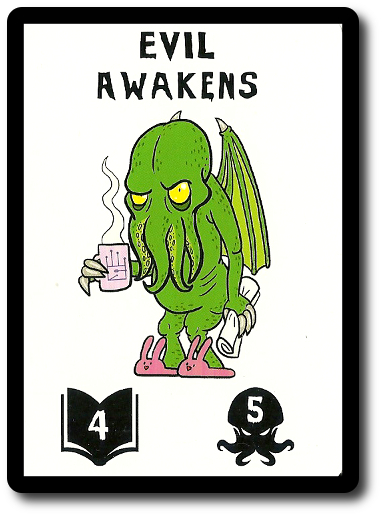 The player draws 1 Cultist card from the Cultist deck, adding it to their hand.

The player now selects 1 card from their hand to play. Cards will either stay in play or will be resolved and discarded. Card types fall into four general categories

Cultists provide dice to complete Rituals. They come in various degrees of power and prestige which translate into 1 or more dice. Cultists also have a very short life span and tend to go insane. 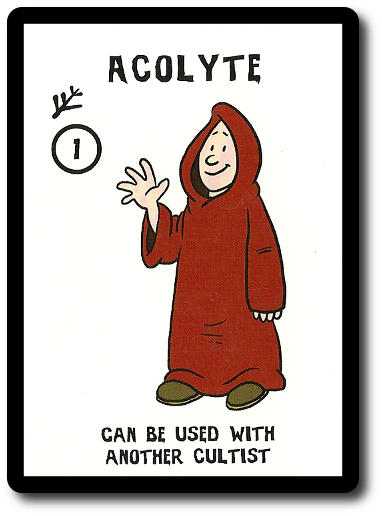 Sacrifices are gifts to the Elder Gods and will most likely meet a terrible fate. Like Cultists, Sacrifices add dice to the player’s Ritual roll. Unlike Cultists who stick around, Sacrifices can only be used once to obtain their dice bonus. 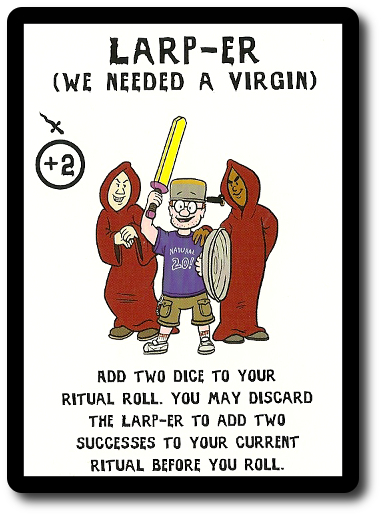 Ancient tombs of knowledge (and unreadable ranting) provide a dice bonus, but only if the player has at least 1 Cultist in play to read it. Like a Sacrifice, they can only be used once. 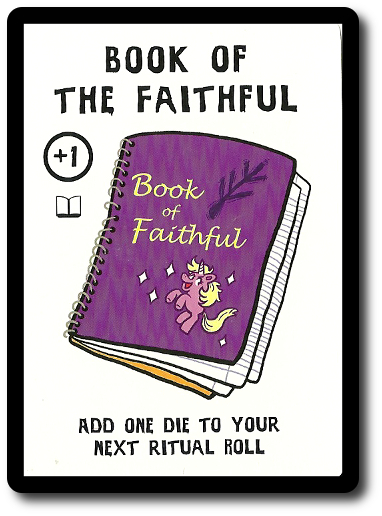 Negatives (and Everything Else)

Negative cards represent all the things that can go wrong with the ancient rituals and the general dangers that go with being part of an insane cult. Negatives reduce the number of dice that can be rolled. In addition, there are cards that steal other cards and make the life of players difficult. It’s all fun and games until someone gets devoured by a nameless horror. 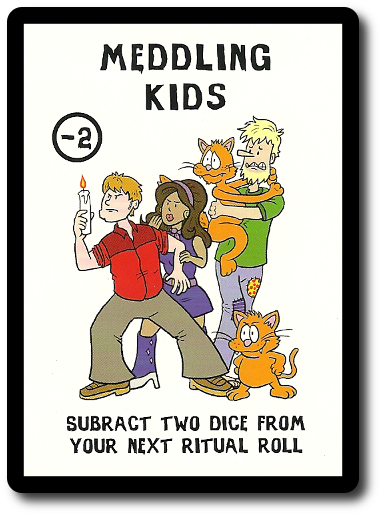 If the player has a Cultist or a Sacrifice in play, they may make a Ritual roll. The number of six-sided dice rolled is determined by the Cultist and Sacrifice cards in play.

If the resulting roll shows less than 3 “1’s” and “2’s”, they only count as failures with no further penalty in the same way as rolling a “3”. However, if the resulting roll shows 4 or more “1’s” and “2’s”, one of the player’s Cultists goes crazy. The player must discard 1 Cultist of their choice. If the player has no Cultists, then the effect is ignored.

This ends the player’s turn.

Completing Rituals and Winning the Game

The game continues until any player scores a total of  21 or more points on their turn. The game ends and the player to score the winning points wins the game.

To learn more about Cultists and Cthulhu, visit the publisher’s website.

The Child Geeks who knew about Cthulhu laughed at all the silly geek references in the game. Those who did not laughed after the joke was explained to them. None of the Child Geeks had a problem learning and enjoying the game. According to one Child Geek, “The game can get pretty frustrating, but that’s just part of the game. You could even say it drives you crazy.” Oh, I see what he did there. Another Child Geek said, “I like the game because it’s funny. I don’t like it when all the Rituals go away, especially when I’m almost done with mine, but I love messing with other players.” Cultists and Cthulhu was found to be a humorous game with fast game play and a satisfying end. In many ways, the game is like a race and the Child Geeks were happy to run it. When all the votes were in, the Child Geeks voted to approve the game.

The Parent Geeks also found the game humorous and laughed even harder when the non-gamer geeks asked silly questions like, “Who is the Cthulhu character?” and “Why do cultists keep getting eaten?” Oh, non-gamers, you are so crazy. Seriously, though, the lack of Lovecraftian knowledge means nothing in the game. A player need not be a scholar or a devoted reader of Lovecraft’s work to play. All that is necessary is a good sense of humor and the ability to cope with deep disappointment. As one Parent Geek put it, “Nothing feels worse than having your Ritual taken from you when you are about done with it.” There is a lot of backstabbing and messing around in the game, meaning those who don’t like shenanigans best look elsewhere for a game to enjoy. In this case, all the Parent Geeks were lighthearted individual who didn’t take life or the game too seriously. This resulted in the Parent Geeks approving the game.

The Gamer Geeks were not pleased. According to one Gamer Geek, “Hold up. We’ve played this game before or a game like it. I didn’t like it then and I sure as hell don’t like it now.” Another Gamer Geek said, “The game is too random, too chaotic, and too shallow to be of any use to me. I’d rather play Slap Jack.” But not all the Gamer Geeks felt negatively towards the game. According to one Gamer Geek, “The game’s theme and game play go well together. Chaos and confusion are both trademarks of Cthulhu and his ilk. I think the game does a good job of communicating this and inserting it into the game play.” Alas, the positives of the game were heavily outweighed by the negatives, resulting in the Gamer Geeks rejecting it.

Cultists and Cthulhu is a rethemed version of Flapjacks and Sasquatches. In my opinion, Cultists and Chthulhu it’s a superior game to it predecessor. Not because of any game mechanic changes (there are none), but because the theme is more familiar to gamers and geeks. There is a lot of geek culture and geek jokes in the cards, which makes the game feel more inviting and targeted. While the theme does nothing in the game play, it does make for a warmer and more welcoming atmosphere. Because players are approaching something they are familiar with and enjoy talking about, the game immediately enjoys a higher level of approval.

As far as game play goes, Cultists and Cthulhu is pretty straight forward. There is never a reason not to attempt to roll and the only level of true pondering a player will do is based on the cards they have available in their hand. Most questions come down to wondering if a card should be played now or held for later. And that’s about it. Other than that, the most complicated thing a player will have to tackle in the game is the growing rage they feel towards their opponents. Players should expect to be messed with a great deal and the target of multiple negative effects. For those who take things too seriously or personally, Cultists and Cthulhu is sure to raise the blood pressure.

For everyone else, I think the game will be enjoyable. It’s far from being a brainless exercise, but the amount of effort a player needs to provide to have fun is fairly small. This keeps the game light, the action fast, and the laughs plentiful. Overall, an enjoyable family game and one that is sure to please the geek in you. Especially if you are a fan of Lovecraft.