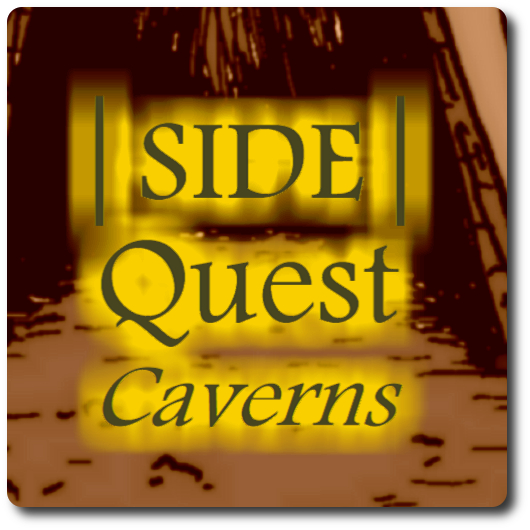 The adventuring life is exciting, short, and often filled with long periods of monotonous quests. The kind where you have to collect a certain number of chickens or deliver packages to someone in the next village. It isn’t glamorous work, but it pays the bills. It’s also some of the safest “questing”, with a very low mortality rate. Well, most of the time, at any rate…

Side Quest Caverns, designed by Sam Pugh and published by True Territory Games via the Game Crafter, is comprised of 33 Cavern cards, 36 Item cards, 2 Hero cards, and 2 Heart tokens. The cards are a thick and as durable as your standard playing card and the Heart tokens are wooden hearts. The illustrations are simple, obviously hand drawn, and worlds better than I could ever hope to produce. Some of the illustrated monsters are the stuff of nightmares.

To set up the game, first separate the Cavern cards, Item cards, and Hero cards, forming different piles for each. Give each player 1 Hero card and 1 Heart token at this time, setting the Heart token on the “4” Shield space.

Second, take the Cavern cards, find the “Exit” Cavern card and set it aside, face-down. 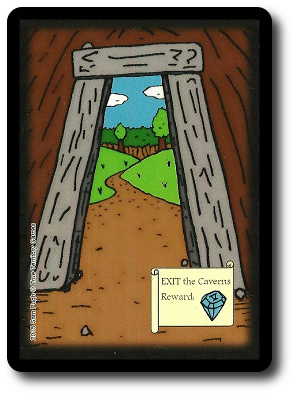 Third, shuffle the Item deck and deal 4 Item cards to each player, face-down. Players should look at their Item cards, but keep them  hidden from their opponents until played. Place the deck of Item cards to one side of the game playing area. This is the Item draw deck for the duration of the game. Leave room for a discard pile.

That’s it for game set up. Determine who will go questing first and begin.

Side Quest Caverns is played in turns with no set number of turns per game. A turn of game play is summarized here.

If a Quest Giver is available and the player can complete their quest, they discard the Item cards necessary now and collect the Quest Giver card for their own.

Step 2: Into the Cavern!

Select 1 Cavern card to flip over. There are three different types of Cavern cards for the player to select from. These are “Locked”, “Blocked” and “Open”.

Once the player has selected a Cavern card and discarded any necessary Item cards, they take the Cavern card and flip it over, revealing what they find. Possible encounters include monsters, treasure chests, and side quests.

YOU ENCOUNTER A MONSTER!

Monsters in the game pop out of nowhere, cannot be avoided, and are more or less speed bumps rather than serious threats. To defeat them, a player need only discard an Item card that matches the proverbial bane of the monster they bumped into. If they do so, the Item card is discarded and the monster is kept to help the player keep track of the treasure (jewels) they have earned. Some monsters will award the player additional perks, such as drawing more Item cards or increasing their total number of Shields. 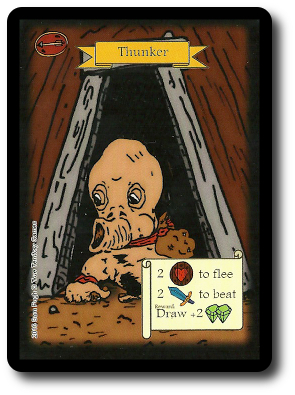 Alternatively, if a player is unable to defeat the monster, the player reduces their Shield value by -1 or more and the monster is discarded.

YOU FIND A TREASURE CHEST!

Random treasure chests will be found in the caverns. Presumably the loot of fallen heroes or wandering monsters who are currently wandering. When found, they are collected by the player and the bonus provided is immediately available to them. 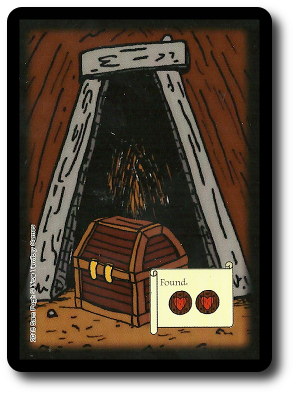 SOMEONE NEEDS YOUR HELP!

The caverns are filled with both monsters and other dark denizens, but not all of them are looking to cause trouble. In fact, some of them are most eager for the help of the players. Quest Givers will ask for a certain number and type of Item cards. If the player is able to provide the requested items, the player has completed the quest. The kicker is, the Quest Giver isn’t picky about who resolved the quest first. Once the Quest Giver is drawn, it remains in play and available to both players. The first to complete the quest gets the reward. A quest can only be completed at the start of a player’s turn. 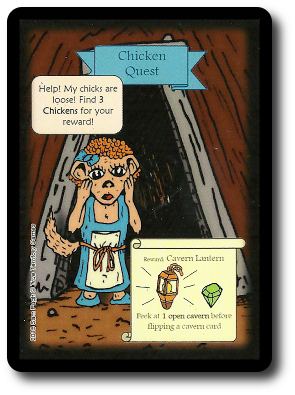 DO complete quests as often and as quickly as you can, as the provided reward often includes abilities that make traversing the cavern much easier.

The cavern floor is littered with bones, trash, and Item cards. At the end of the player’s turn, they draw 1 Item card and add it to their hand. Depending on any special abilities or treasure found, the player might be able to draw 2 or more Item cards. There is no hand size limit. 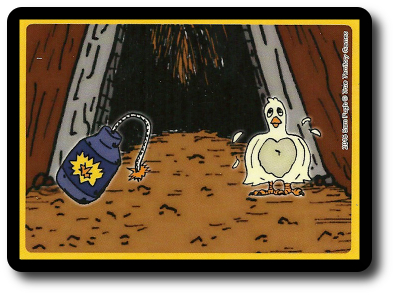 Item cards can be used for either of the items showing, but not both

This completes the player’s turn. The next player now takes their turn starting with step 1 noted above.

The first player to exit the cavern wins the game. Alternatively, if a player’s Heart token reaches zero, their hero has fallen and their opponent wins by default.

Side Quest Caverns can be played solo by using the same rules and set up. The object of the game is still the same, which is to say, survive the cavern. However, the player should keep track of how many jewels they collect and exit with, attempting to beat that number each time. To do so, the player will need to spend longer periods of time in the Underdark, exploring and pushing their luck.

To learn more about Side Quest Caverns, visit the game’s web page on the game Crafter.

The Child Geeks had a good time with this game, but also found it frustrating at times. According to one Child Geek, “All I want to do is find those stupid chickens but other players keep finding them first!” What most of the Child Geeks didn’t like was that the quests were not theirs alone to complete. In truth, I don’t know how the game would work if it was designed any differently than the way it is. The cavern is always “built” randomly and there is no way to go farm (snicker) a chicken to complete the quest. Still, it didn’t sit right with some of the Child Geeks, but they got over it. As one Child Geek put it, “You just have to roll with the punches in the game. Sometimes you get the quest and sometimes you don’t.” Most of the Child Geeks also realized the game wasn’t about completing side quests. It was all about surviving and getting out first. Which was a lot of fun in and of itself. When the games were over, all the Child Geeks voted to approve Side Quest Caverns.

The Parent Geeks found the game to be slightly entertaining, but mostly just boring. According to one Parent Geek, “I’d play with this my kids, but not with adults. All the game is about is drawing cards and playing cards. I don’t feel like I’m exploring or going on an adventure.” To be fair, nor did the Child Geeks for the most part, but they loved the idea of not knowing what was behind every corner and finding out with a flip of the card. The Parent Geeks felt no such rush and quickly got bored. They stuck with the game when playing with their children, but quickly moved on to other games when playing with just their peers. According to one Parent Geek, “I think this is an alright game for kids, but not for adults. Just too repetitive with no real fun to be had.” When the votes were in, the Parent Geeks decided to reject Side Quest Caverns.

The Gamer Geeks were disappointed with the game, finding it to be missing the mark on so many obvious game design choices. “For example,” said one Gamer Geek, “When you flip over a card, you should be able to encounter whatever the hell is behind it with more than just a card. I should be given several choices.” Another Gamer Geek said, “I think the designer should have given the option to exit right away and the winner of the game was the player who survived and had the most treasure. Then the game should end when a random monster is drawn or is behind one of the 3 doors. Just lots of missed opportunities here.” The Gamer Geeks found Side Quest Caverns to be a good example of a game that could have been better and still could be if the game designer wanted to make it so. As one Gamer Geek put it, “It makes me frustrated when you play a game that has so many obvious ways to make it even better.” When the games were over and everyone was out of the cavern, the Gamer Geeks rejected Side Quest Caverns.

It’s easy to judge a game and say it could have been better, faster, more, and bigger than what it is at the moment. Mostly because some players already have a solid idea of what they want in a game. However, judging a game on what it “could have been” versus “what it is” is a mistake. Side Quest Caverns captures the theme of exploration, danger, adventure, risk, and reward with simplistic ease. I was honestly surprised none of my players thought as I did, since the game was effortlessly set up and provided a real challenge once played. But to be fair, that challenge is based on random outcomes, not difficult choices. While I do not agree with some of the negative opinions, I cannot refute them, either. They are heavily biased and not incorrect from the point of view of the person providing them.

That being said, Side Quest Caverns is a simple game and perfect for Child Geeks. I do wish it was more than 2 players, but then the game would stay much longer on the table than it should have. As it is now, it’s fast, provides a down and dirty adventure, and challenges the players to push deeper into the dark to save chickens. Not too shabby. If you are looking for a fantasy game that is easy to learn and easy to play, do explore Side Quest Caverns.