King of the Jungle Game Review 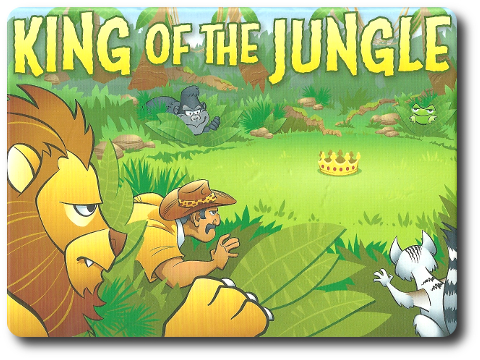 Neil deGrasse Tyson, an American astrophysicist, author, and science communicator, said “In the animal kingdom, one of the keys to survival is to outwit your enemies. And when you’re surrounded by carnivores, one of the best strategies is to fade into the background and disappear.” In this game, you are always hunting and being hunted. Your survival depends on knowing more than others. But even the weakest mosquito can take out the strongest lion if the timing is right.

King of the Jungle, published by OMGames, is comprised of 21 Animal cards, 26 Event cards, 26 Advantage cards, and 8 Reference cards. Artist Kirk Wescom has made each card colorful and pleasant to look at, further reinforcing the game’s theme and injecting a lighthearted element of whimsy. The cards themselves are of the same quality and durability as your standard playing card.

Second, shuffle the Animal cards and deal one to each player, face-down. Players should look at their Animal card, but keep it hidden from opponents. Place the remaining Animal cards face-down next to the Event deck. This is the Animal draw deck. 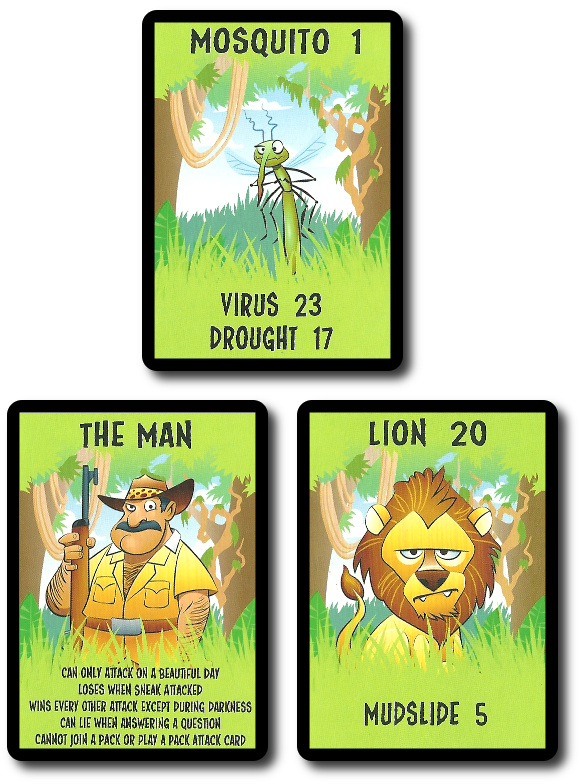 Third, place the Advantage cards back in the game box, as they are not used for the basic game. Refer to the “Game Variants” section of this review for more details.

We Have Fun and Games

King of the Jungle is played in rounds and turns with no set number of rounds or turns per game. On  player’s turn, they can take one of three different actions. Each action is summarized here.

The player can ask any opponent a question that can be answered with a simple “Yes” or “No” response. For example, “Does your animal eat meat?” or “Does your animal fear floods?”. The point of the question is to gain knowledge. Whatever question is asked is asked out loud and the answer is also given out loud, informing all players in the game.

There are two additional rules that must be followed during this step of the player’s turn. First, a player cannot ask an opponent a question that was asked a question during the last turn. Second, the opponent must answer the question truthfully, unless the opponent was given the “Man” or the “Snake” Animal card. In which case, they can lie through their teeth.

After asking their question, the player’s turn is over.

The player can attack any opponent they choose by simply pointing to their opponent and announcing, “I attack you!”. The opponent being attacked passes the player their Animal card in such a way that no other player in the game can see it. The attacking player then evaluates both cards to determine who wins the attack. This is done by evaluating and comparing the Animal card’s strength values and adding or reducing each strength value using the current Event and Advantage card in play.

The weaker Animal card is revealed to all the players and is considered “eaten”. The owner of that card is now out of the game. The player who owns the stronger Animal card is given it back and does NOT reveal it to the remaining players. Their Animal card remains a secret, but due to revealing the eaten Animal card, all players currently in the game quickly learn the overall possible strength of the Animal card that was victorious.

After the attack, regardless if the player was successful or not, their turn is over.

If the player does not want to ask any questions or does not wish to attack, they can announce that they are passing. This ends the player’s turn.

In the Jungle Where We Play

After each player has had their turn, the round ends, thus ending the “day”. A new day dawns, requiring a new Event card to be drawn which replaces the last Event card in play. With a new condition in place, very strong animals during the last round might find themselves very week. Or vice versa. In this way, no animal in the game is ever the true “King of the Jungle”, and players will find that their Animal card’s overall advantages and disadvantages in the game will influence their overall level of confidence in their ability to survive. 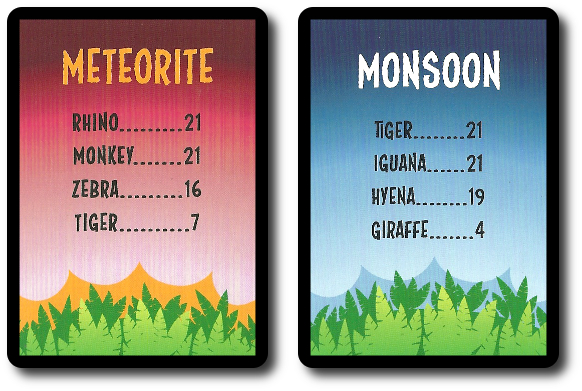 If all the Event cards have been played, shuffle the discarded Event cards to create a new Event card draw deck.

I Wanna Hear you Scream

The game continues until only one player is left in the game. This player and their Animal card is the true “King of the Jungle” and the winner of the game. 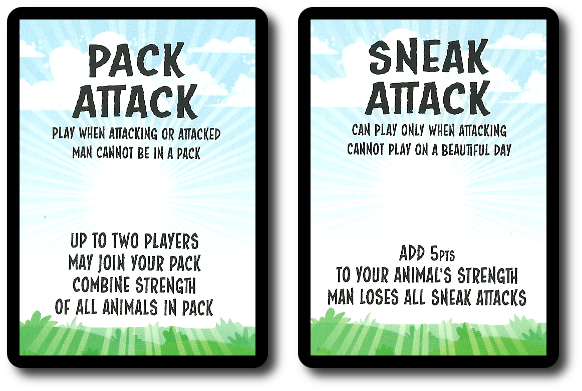 To learn more about King of the Jungle, visit the game’s website.

The Child Geeks both enjoyed the game and were terribly frustrated by it. According to one Child Geek, “I like the game, but I hate it when I get a really weak animal.” This was a common statement from our Child Geeks throughout our playing sessions. The game play itself was widely enjoyed, but always trumped by the Animal card strength. Those players who had stronger animals always stayed in the game longer, while those with weaker animals were out and bored on the sidelines. As one Child Geek put it, “If you play this game, you better bring a book so you have something to do while you wait for the game to end.” When all the hunting was over, the Child Geeks gave King of the Jungle a mixed approval.

The Parent Geeks were much more optimistic, finding the downtime between being eaten and starting a new game to be relatively short. As one Parent Geek put it, “Yes, sometimes you are given a weak animal, but I think the goal of the game should be how long you can survive, not if you win or not.” Another Parent Geek said, “I think it’s a pretty good party game. You don’t have to know a lot about games to play, it requires players to continually interact, and even if you are knocked out of the game early, a new game starts up again pretty quickly.” The Parent Geeks did acknowledge that sometimes a player is just given a bad card, but they also said that a player is more likely to get a card that will survive for a long period of time. In addition, a player is almost always able to play 3 or more rounds of play before the hunting begins. When all the games were done, the Parent Geeks endorsed King of the Jungle.

The Gamer Geeks didn’t care for the game. According to one Gamer Geek, “Nothing original here. Just guessing if a player has a higher number than you, random events to change number values to make the effort of trying to learn anything a waste of time, and game breaking advantages to make everyone roll their eyes.” Another Gamer Geek said, “Like Are You a Werewolf?, the game needs some house rules to make it better. I think it’s a good thing that the game can be easily made into something worth your time, but I find it to be ridiculous that I have to fix the game to begin with.” None of the Gamer Geeks found King of the Jungle to be a game they would like to play, but they did acknowledge that they found the game to be a good on for younger and inexperienced players.

There is, what I would consider, a slight flaw in the game. A player must attack another player’s Animal in order to knock them out or to get an Advantage card. A weaker Animal card is not, by default always weak, as Event cards and Advantage cards can give a player the edge they need to win a fight. But not always. This means some players are going to be out of luck right from the start. Not much fun. However, the game’s speed of play does help here. A single game is over pretty fast, meaning players who are knocked out early are back in the game within 10 or so minutes.

Do not play this game with only two players. Total waste of your time. This is a game that needs as many players as possible to be fully enjoyed. Grab yourself a bunch of your friends, sit around in a circle, and go hunting. Only when you have a large variety of hunters in your midst does the game come to life. What starts out as nothing more than a guessing game takes on a life of its own, as players begin to listen in on opponent’s questions and begin to formulate their own theories. All the while, the number of players quickly dwindle and time becomes the one thing no player has available to them.

King of the Jungle feels a bit rules heavy for what it is. Never to a point where a player is swamped, however. A number of players did make up their own rules to adjust or remove other rules, but the results were always the same. What the players want is a fast game full of deduction and surprises. On this point, King of the Jungle delivers right out of the box. It’s “how” it delivers that the players were attempting to adjust. Make no mistake, this is a game that is playable right from the start. I find it to be boon that the game was designed well enough to easily compensate for other playing styles without upsetting the game’s core.

If you are looking for a new party game, where deduction and memory are your tools for survival, then look no further than King of the Jungle. It may feel like a hunt in the dark at times, but the overall experience and game play works well for large groups of players who just want to get together and go hunting for some fun.