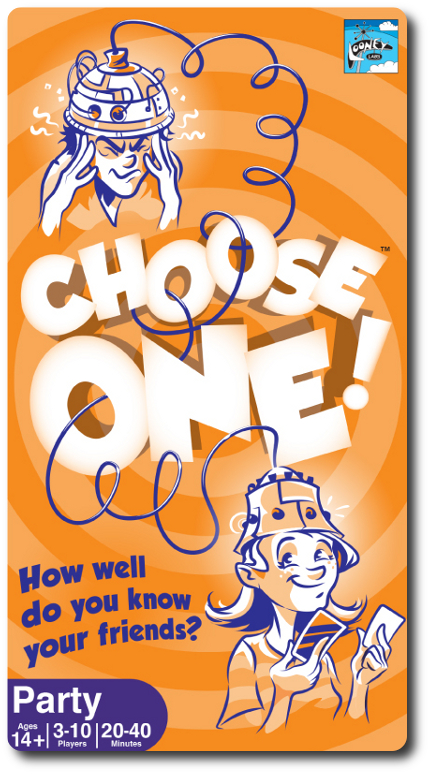 Just how well do you think you know your friends? Your spouse? Your children? Odds are you think you know them well, but there is much yet to be discovered! In this game, you are rewarded for knowing as much as possible about the people you are playing with, but be careful! You cannot lie in this game and every question must have a real answer. The real question is how much do you want to share?

Choose One!, designed by Andrew Looney and published by Looney Labs, is comprised of 1 game board, 275 Topic cards, 20 Choice cards (10 white, 10 purple), 1o Player tokens, and 1 cloth bag (that holds the Player tokens when the game is not being played). Also included in the game are 5 blank Topic cards, which allows the owner of the game to personalize it. All the cards are made of solid card stock and are as durable as common playing cards. The game board is solid cardboard and thick. The Player tokens are a crazy assortment of bits that have no relationship to each other or the game. For example, our copy included a small plastic wine bottle, a small purple brain, and a black button.

To set up the game, first unfold and place the game board in the middle of the playing area.

Second, allow each player to select a Player token of their choice and place them on the “Start” space located on the game board. Any Player tokens not selected should be placed back in the game box.

Third, each player is given 1 “White” Choice card and 1 “Purple” Choice card. The rules suggest that the color is blue, but the rods and cones in my eyeballs recognize the color as being purple. Any Choice cards not used should be placed back in the game box.

Fourth, shuffle the Topic cards and deal 5 out to each player. This is the player’s hand. Place the remaining Topic card, face-down, to one side of the game playing area.

This completes the game set up. Time to see how well you think you know your friends and family!

A Question of Choice

Choose One! is played in turns with no set number of turns per game. On a player’s turn, they become the Chooser and will select 1 Topic card from their hand and play it, face-up. They will then select 1 of their Choice cards and play it face-down in front of them. The Topic card will give two topics. From these two topics, the Chooser must select the one that they relate to the most. The two topics will determine the relationship. For example, if the Topic card says “Bees or Wasps”, perhaps the Chooser will select the insect that scares them the most. Or, if the Topic card says “Cake or Pie”, perhaps the player will select the one that they enjoy more. The color of the topic item they choose (white or purple) is the same color of the Choice card they play.

Now all the other players have to stop and think about what they know about the items listed on the Topic card and what they think they know about the Chooser. They will then attempt to select the same colored card as the Chooser using their knowledge and a bit of guess-work. Choosers cannot bluff in this game or lie, which means that the topic item that was selected is a fact. However, what is not know is how the Chooser interpreted the topics on the card. That is part of the game and the challenge for the other players!

The players who scored points now move their Player tokens a number of spaces ahead on the game board equal to the points earned.

Finally, the Chooser discards the Topic card they played along with any other Topic cards in their hand they no longer want. They then draw back up to 5 cards from the Topic draw pile. All the Choice cards are collected and play continues with the next player in turn order sequence.

The game continues until a player crosses into the winner circle, earning a total off 11 or more points.

To learn more about Choose One!, visit the game’s web page.

Party games tend to be hit or miss with the Gamer Geek crowd, so I can comfortably say “I don’t know” when it comes to the final approval from the game elitists. There is more than enough “game” here to appeal to them, but it might start to feel a bit repetitive and shallow for their taste. For the Parent and Child Geeks, I’m certain this game will be very well received. The game is fast, casual, entertaining, and very social. This is, technically, a Trivia game which oftentimes excludes younger players. However, Choose One! is about how well you know (or think you know) the people you are playing with. Regardless if the Child Geeks get the answer correct or not, they will enjoy the challenge, learning something new, and above all else, teaching everyone something new about themselves when it’s their turn to select a Topic card.

The only aspect of this game that has me slightly worried is the how well it will be played with a crowd of players who do not know each other very well. The game itself serves as an outstanding icebreaker. What better way to learn more about the other party guests than a game that teaches as it plays? Of course, the flip side is that you cannot play this game well until you know the people you are playing with. I doubt very much this game will do as well with a group of players who don’t know each versus a group who does. I’m sure we’ll see great success with family and gatherings of good friends, and less so with party guests of mutual acquaintances.

Teaching Choose One! is very simple. I suggest you do a quick example and that’s about as far as you need to go. The only point you need to overly emphasis is that the player who selects the Topic card CANNOT LIE when they place their Choice card. There is no lying or bluffing in this game. None. I cannot emphasis that enough. This a game about knowing facts, not guessing how a player might or might shift those facts to their advantage. Note that a player must be able to read to play this game. Any player who cannot needs to team up with an older player.

After I taught the game to my family, I asked them their thoughts on Choose One! so far.

Again, just for emphasis, you CANNOT LIE in this game, much to the disappointment of my 9-year-old. Let’s see if Choose One! is a game we choose to play again or once is simply enough.

The Child Geeks had a great time playing the game with their family. They felt very proud of themselves when they chose the right answer and even more proud when it was their turn to select the Topic card. Note that we played this game with Child Geeks as young as 4-years-old without issue. To do so, you need to have them team up with another player who works with them to select a Choice card. I’ll spare you the details, but I will state that much of the choosing happened under the table. It’s a bit clunky, but it works and allows your youngest little geeks to play with the family. According to one Child Geek, “What I like about this game is learning how much I know about my family!” All the Child Geeks voted to approve the game, but it should be noted, they only played with their families. 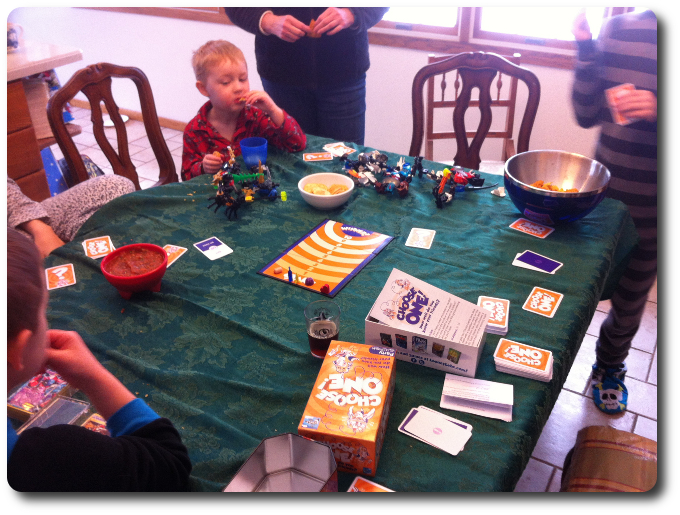 A brief pause in the game as everyone gets a quick snack!

The Parent Geeks enjoyed Choose One! with their families and close friends, but their love of the game quickly dwindled when they played it with people they didn’t know very well. According to one Parent Geek, “This is a game that plays well with those you know and horribly with those you don’t.” Well said! Choose One! is a game that challenges your knowledge of those you know. If you don’t know the person, you are simply guessing. Guessing over and over again isn’t that interesting, fun, or engaging. As such, the Parent Geeks all voted to approve the game with their family and friends, but rejected it when they took it to parties and gatherings where they didn’t know the other guests. The end result was a mixed approval rating.

The Gamer Geeks were not impressed with Choose One! According to one Gamer Geek, “This is the biggest non-Party game I have played this year.” Another Gamer Geek put a bit more thought in their comment and said “The game’s strength is its ability to leverage common knowledge, but fails to really challenge a player as a result.” The Gamer Geeks found the game to be entertaining, but only at first as the novelty of the game quickly wore off. In the end, the Gamer Geeks all voted to reject the game.

Per our observations, Choose One! is best played with people you know. If you don’t know the crowd, the game becomes nothing more than guess-work. True, you have a 50/50 chance of getting the answer right, but you are always guessing. That was found to be annoying to some and tiring to others. For families and friends, the game played beautifully and was very well received. With everyone else, not so much. As Party games go, I’m not certain Choose One! fits the bill. I think it’s better viewed as a Family game, which is really nothing more than a generic type that suggests an average family can play the game. But in this case, Choose One! really is best as a game played with the family, for who knows you better than your own loved ones? Close friends will also enjoy this game, but that’s about as far as it goes based on our observations.

If you are looking for a game that challenges your knowledge of loved ones and dear friends, Choose One! is most certainly a game you should choose to add to your game collection.

One Response to Choose One! Game Review