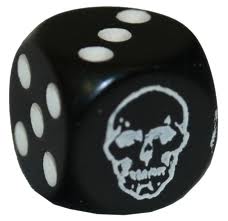 Some of my favorite games to play with my kids, ages 3 to 6, can also be the hardest. They love rolling dice, moving little guys around the board, and going after the bad guys. The problem comes when the bad guys fight back.

For many games, it’s the potential for character death that creates tension. Without that possibility, there would be no limiting factors on a player’s actions or the need to think strategically. What fun would there be in Descent if you could just walk through the dungeon dispensing skeletons without any ramifications? As the arrows bounce off of you, you saunter over, take a quick swipe, and move on.

When we first started, I wanted to share the fun of this tension with my kids. I can remember our first game of Heroscape. Everything started well, I handicapped myself to keep things even, and lost a few troops in the process. The first of my son’s Airborne Troopers to get hit brought everything to a halt. While it was only one of four troops in his squad, the character’s “death” was more than my son could handle. I tried the idea of the character just being knocked out and just waiting on the sidelines, but that didn’t work. He was gone and Daddy was the one who did it.

Looking back now, my error was obvious. These are not little grownups who might not get all the rules, they are little kids just hanging out with Dad. They didn’t want tension; they couldn’t handle tension. They just wanted to roll dice, move little guys around the board, and go after bad guys.

Undaunted, we tried again a few days later. This time we played Castle Ravenloft. We still took hits and even ran out of life, but had an unlimited number of healing surges to use. In the end, we needed three surges, normally you only get 2. We had a great time, and in my eyes, this was a big success.

Using some simple modifications, games like Dungeon Quest and Heroquest can become 30-40 minute adventures full of storytelling, treasure finding, and near death escapes. As a dad, I see my kids learning to take turns, making choices, and getting a chance to help eath other and work as a group.

I’m trying to figure out when to move them forward to playing the regular game. For now, I’ve decided it will be when they ask for it or when I ask them to play and they say it’s boring. Instead of pushing them, I’m going to let them lead me.

I’m guessing, at some point, character death will lead to questions of real death and I hope this will be a way to ease into that discussion.

So get out there and game with your kids. Just remeber to keep your eye on what’s important and have fun.