The Positive Side to Negative Reviews? 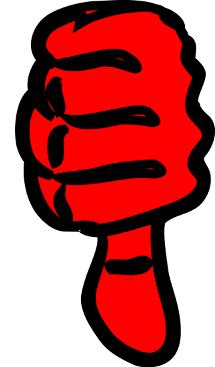 Every once in a while, the Reviewer community likes to kick up the dust by having a lively debate on the pros and cons of negative reviews. The argument normally consists of two parts. The first is if a reviewer can be taken seriously if they only provide positive reviews. The second questions if a Reviewer should publish a negative review at all. To bastardize the Bard, “To be negative or not to be negative is the question.”

Let us first define what a “negative review” is. This is any commentary that casts a product, person, or idea in a less than favorable light. Negative reviews can be handled professionally, with focus on details and use of objective statements or they can be riddled with slanderous statements and subjective points of view. Here are two examples. Which one do you gravitate towards?

Depending on how you think, this is either good news or bad news. I say as much because Psychologist believe we are hardwired to be positive or negative thinkers. Should this suggest that you are a negative person if you find more value in negative reviews? Maybe, but I think that falls squarely in the bucket of speculation. Still, it’s interesting that the crowd who claims that negative reviews are King are always being negative towards positive reviews.

Before you find a sword and charge into the battle to defend your opinion, consider the following: it doesn’t matter. Negativity has just as much purpose in this world as positivity. You will naturally gravitate towards one or another. I’m a hardwired positive person, so I tend to focus on the upside of things, but I make it a point to indicate game flaws in reviews, because the goal is to critique the game. The difference between me and a negative Reviewer is that I end my thoughts focusing on what I like, while others will focus on what they don’t.

Which do you want to hear? The reasons why you should get the game or the reasons why you should not? Once you answer that question, you know exactly what types of reviews and Reviewers you should read. This will also help publishing companies and game designers find Reviewers to work with, although their motives are more about controlling propaganda than garnering independent thoughts. Something for the Reader to consider.

I don’t know about you, but I tend to avoid people who are always negative, but I seek out reviews from Reviewers who I know are negative. I can always depend on them to show me the dirty underbelly of the brightly lit world I inhabit. As a positive person, I know I’m not looking for negative things. That’s not good and can get me in trouble. If we don’t look for holes, we might fall into them.

Reviewers have clout and want to influence you. Yes, they want to do the thinking for you, to a certain degree. Don’t let anyone tell you it’s all about “educating” and “informing”. Those are just nice ways of saying “I’m giving you ideas I want you to think really hard about and agree with”. Reviewers are not attempting to trick you, however. They really do want to share information. Just understand that Reviewers are not doing it for completely altruistic reasons. They have their own plans.

Negative reviews are just as necessary as positive reviews, but the goal for every Reviewer is to obtain, keep, and grow an audience. The current thinking (without any factual data to back it up) is that negative reviews will draw an audience and keep them. I was bashed repeatedly and felt I was under tremendous pressure to focus on negative aspects of games when I first started. I eventually ignored all that noise and just did what I loved doing, but it wasn’t easy. Now I get lambasted by Readers when my reviews are believed to be negative.

For new Reviewers, they have the perceived choice of a slippery slope or tricky ladder. If they go the route of negatively focused reviews, that slippery slope will earn them a lot of views quickly since they’ll most likely be controversial, but it’s very hard to get off that slope once you are on it. Once you establish yourself as a “hardcore critic”, good luck attempting to be taken seriously if you actually enjoy something. The same goes for those who only want to focus on the positive. That ladder may lift your spirits and excite your passion for the hobby, but people will believe you are not grounded and unable to find faults if you only spend time looking at what works. Every time you release a negative review, you’ll feel like you went down on the ladder, which will impact your level of enjoyment.

So what should be done? Don’t slide on the slope and don’t climb a ladder. Walk at your own pace until you find the right rhythm. Then sprint.

The same goes for Readers. If a Reader only seeks out negative comments, they won’t hear the positive ones. If a Reader only seeks out positive comments, they’ll never get a grasp of faults that might or might not be of any real importance. Again and again, it comes back to striking a balance. A Reviewer and a Reader need not be pro positive or only negative. The argument about negative reviews is just as important and unimportant as arguing about which music genre is the best. It doesn’t matter and the “right answer” is whatever the person believes to be true.

We all have opinions and we all want to be taken seriously. What we tend to forget is that everyone is welcome to have an opinion we don’t share. Be it negative or positive, opinions are just a collection of biased ideas, personal experiences, and subjective reasoning. Yours are important to you and are in no way threatened by another person’s different beliefs. The world and the game table is a big place. Negative ideas can co-exist with positive ideas as long as everyone agrees on one simple truth…

None of us are infallible.

4 Responses to The Positive Side to Negative Reviews?