The Future of Spectator Sports? 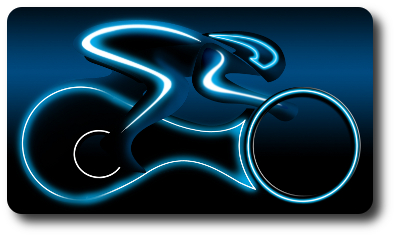 We all keep track of some hero, be they real or imaginary. Lots of us keep track of athletes and the sports they play, following their careers with great interest. I traded football cards for a short time and loved reading the stats of each of the players depicted. This is perhaps my earliest memory of “meaningful numbers”. Yes, I added and subtracted well before I ever had my first football card, but these where numerical values that had little in the way of real meaning other than a solution to a mathematical equation. There was nothing exciting about the results of  4 + 6 or how many times 2 could go into 16.

The numbers on the back of a football card were vastly different. I could quickly scan the back of the card and know how many touchdowns the player had in a single season and their career totals. Here, at last, was where my mind really started to get interested in numbers and their meaning. What I was lacking, you see, was context. Knowing how many yards a player rushed in 1989 in comparison to their last year or another player in the same season was something to get interested in and to talk about. 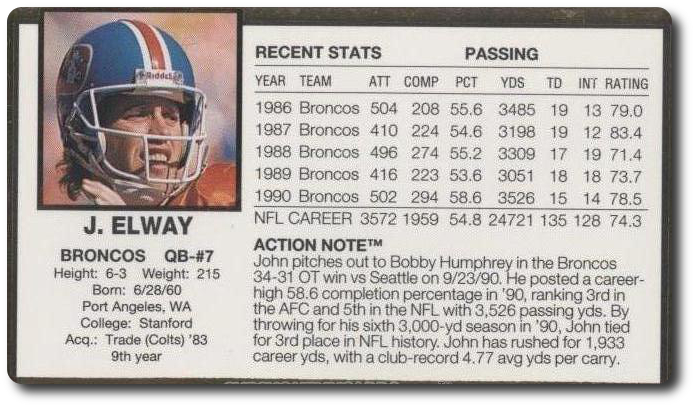 Living in Colorado helped me to do two things as a kid: learn how to downhill ski and collect a lot of Elway football cards

I have long since given up my football card collecting and only pay attention to football around the Super Bowl, nowadays. I have too many other interests that take up my time, the most important being a full-time father. My days of watching football and pouring over stats have been replaced with board games and memorizing complex application architecture. While not as exciting to many as football, the context of all those numbers is still there and still gets me interested.

Metrics and data collecting have been around since the first time a bystander decided to record who won a race or how many bears one hunter killed versus another. These stats were used to determine an individuals worth and their ability. Sports fans yearn for these numbers and look them over with as much interest as a 2-year-old looks over the donuts behind the supermarket display case. There is no sport or activity that does not have some sort of metric to determine overall levels of success and numbers collected to suggest relative gain or loss. From the Stock Market to fishing, and to car racing to bicycle racing, collected numbers have context and meaning. Speaking of racing…

The Ohio CycleWorks bike team participated in this year’s Race Across America (RAAM). This is considered one of the world’s toughest bicycle races and only open to the most accomplished of athletes. The race starts in Oceanside, California and has the bicyclists travel 3000 miles, crossing 12 states, and finally ending in Annapolis, Maryland. Many bicycle enthusiasts follow the race, keeping track of teams, their overall speed, and time. This year, the Ohio CycleWorks bike team teamed up with FedEx Custom Critical and used technology usually reserved for package tracking and logistics. The technology is called SenseAware®.

SenseAware does exactly what you might consider most package tracking applications to do. It keeps track of where the package is currently located, its current destination, time to delivery, and other logistic information. It also has the capability to keep track of the current temperature, humidity, and air pressure. All pretty important stuff for package delivery and pretty uninteresting to most. But let’s consider what a “package” is. Isn’t it just a “thing” that is going from Point “A” to Point “B”? And if such is the case, couldn’t this package be a person? And couldn’t this person be in a race? Yes, this is all possible and that is exactly what they did.

This year’s RAAM provided some observes of the race the ability to watch the race in real-time like never before. I was one of those lucky individuals who received an invite and I was able to watch  Scott Garchar (board member of Ohio CycleWorks Charities) participate in the race. By using the SenseAware technology, I was able to overlay a map and watch Mr. Garchar throughout the entire race. Suddenly, speed and temperature took on new meaning as I watched the bicyclist go through blistering heat, cold wind, and every other type of weather you could think off as he made his way across the United States. 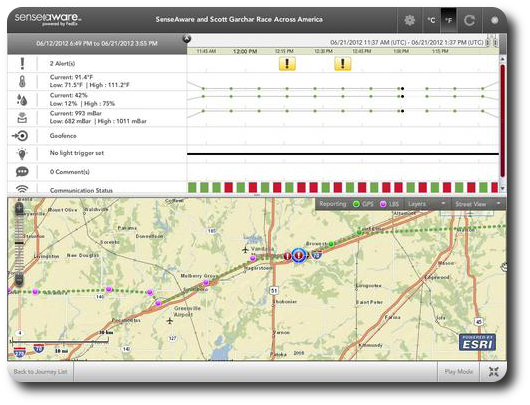 In a word, I found the entire event “fascinating”. I was able to track and keep up-to-date like never before. The race became more interesting and all the stats the SenseAware collected were there for me to view and review. How much light was there? Was the bicyclist able to go faster with more or less light? How about the temperature? When it got hot, I could see the speed start to drop. In addition to all this information, I was able to follow their journey by looking at the captured images. Like never before, I was given a deeper and more meaningful level of context to the race and to the individuals participating in it.

When the team finally crossed the finished line, my little geeks and I felt like we had been on the race, from start to finish, with them. We watched them go through deserts, up mountains, and across the plains. When the team finished the race on 06/23/2012, it was a remarkable journey and race like none other I have ever experienced. Form the comfort of my own home, my little geeks and I were able to be as close to the race as one could possible be without actually being in it. Truly incredible and entertaining for all of us. 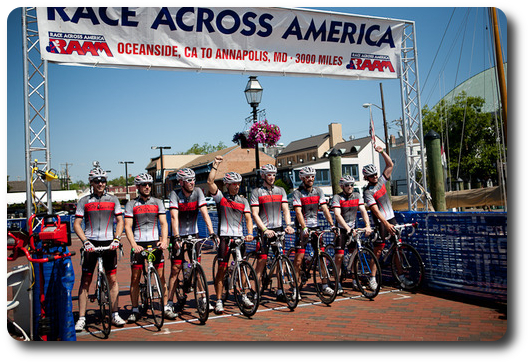 Victory and the end of an incredible journey!

Racing for a Cause and the Future

While the race was incredible to watch and share with my little geeks, it also served a very important purpose other than entertainment. The Ohio CycleWorks bike team raised money for the Akron Children’s Hospital with cooperation and sponsorship from FedEx Custom Critical. They raised over $90,000 and each cent is going right to the kids who need it the most. Truly, a victory for all.

This race proved two things to me. First, I still find sports interesting but only when I can get at the numbers and the data. This geeky side of me has long been dormant and I really liked discovering it again with my little geeks. We had a great time tracking the race together and checking in each day to see how “our team” was doing. Second, the technology used is powerful. Using it, we can track packages, people, important medical supplies, and anything you can think of to ensure it is safe, sound, and reaches it destination.

And yes, I’m sure the “Big Brother” conspirators of the world will look at this and universally agree that we are on the verge of being tracked at all times, but I don’t see it happening. Where is the interest in how long I spend in the restroom or how long I sit in front of my T.V. watching the Game of Thrones HBO DVDs? Wouldn’t it be more interesting and satisfying to track birds, satellites, and sailing vessels that race around the world? I think so and I look forward to the day where “watching sports” is more than just an activity that requires you to wear a foam cheese wedge on your head and shout at the television. Of course, I’ll be doing the same thing, but in front of my computer, watching the numbers roll by and geeking out.

If this is the future of spectator sports, I’m all in. I’ve got my spreadsheet loaded and my pivot table ready!

I received compensation from FedEx for covering the use of SenseAware® technology during the 2012 Race Across America. My ideas and opinions relayed in this blog post and any related Twitter discussions are the my own and are not provided by FedEx or its affiliates and subsidiaries.