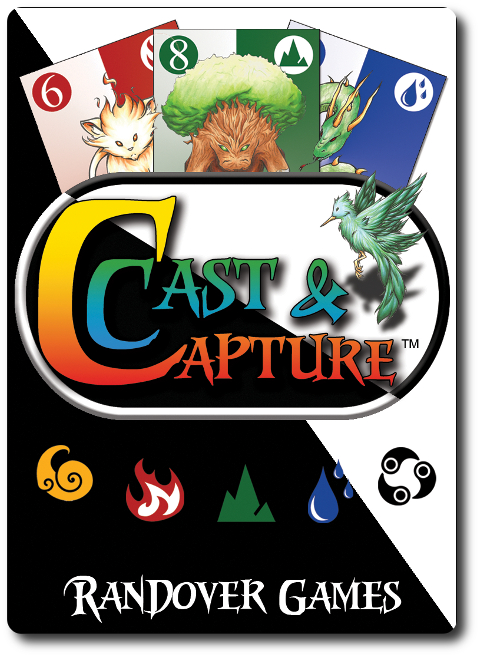 Learning magic by reading dusty books and listening to long lectures can only take a young wizard and witch so far. There comes a time when the knowledge learned must be put to the test in the field. Each player is well-trained in the mystical arts and is now required to demonstrate its practical applications. The task at hand is simple: capture magical beasts using nothing more than your magic and your wits.

Cast & Capture, designed by Casey McCormick, Ben Stiers, and to be published by Randover Games, will reportedly be comprised of 50 Creature cards, 54 Spell cards, and 4 Blend/Group cards (not included with our review copy of the prototype). As this is a review of a prepublished game, I will not comment on the game component quality. The provided Creature illustrations by Chelsea Flores are excellent, capturing the personality of the different magical creatures the players hope to ensnare.

Prepping for the Hunt

To play the game, first separate the cards into their different card types: Creature and Spell cards.

Second, shuffle both decks and place them face-down in the middle of the playing area. Leave room for discard piles.

Third, deal 3 Creature cards face-up in the middle of the playing area. These cards represent the initial Creatures available to capture. Leave room underneath this row of Creature cards for Spell cards. This reserved area will be the Spell Pool.

Fourth, deal 4 Spell cards to each player, face-down. These cards are the player’s starting hand. Players should keep their Spell cards hidden until played.

That’s it for game set up. Determine who the first player is and begin.

As a student of the Arcane Academy, you have been trained in a wide range of spells and have vast knowledge of both basic and advanced spell theory. For example, you know that the essence of magic can be broken down into 5 fundamental elements. These are Water, Earth, Spirit, Air, and Water. From these elements, all things are possible, including magic.

The creatures to be humanely captured by you and the other players have natural affinities towards one of the 5 fundamental elements. Knowing this, you can use the Creature’s primary elemental force to lure them into a cage without any struggle or violence. This is actually very simple, but it requires just the right amount of Spell Power and the correct Elemental Type. 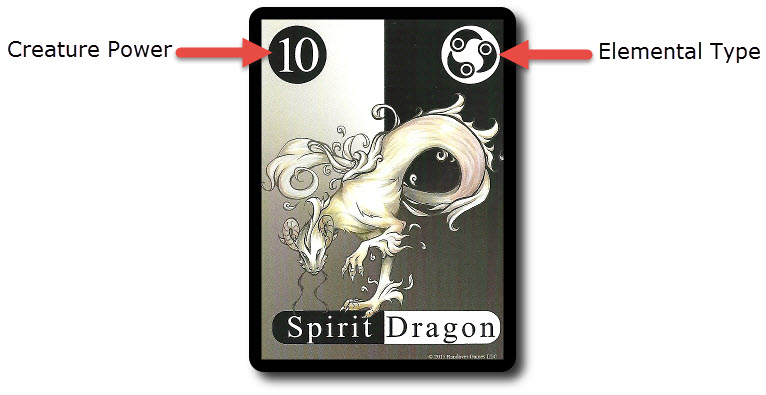 Spells at the Ready!

Cast & Capture is played in turns with no set number of turns per game. A player’s turn is summarized here.

The initial seeding of 3 Creature cards sets the stage for the hunt to come. At the start of every player’s turn, one more Creature is revealed. The player draws the topmost Creature card and places it face-up with any other Creature cards currently in play.

The player has several choices during this step, with the primary goal to capture one or more Creature cards currently in play. This is done by casting a spell. 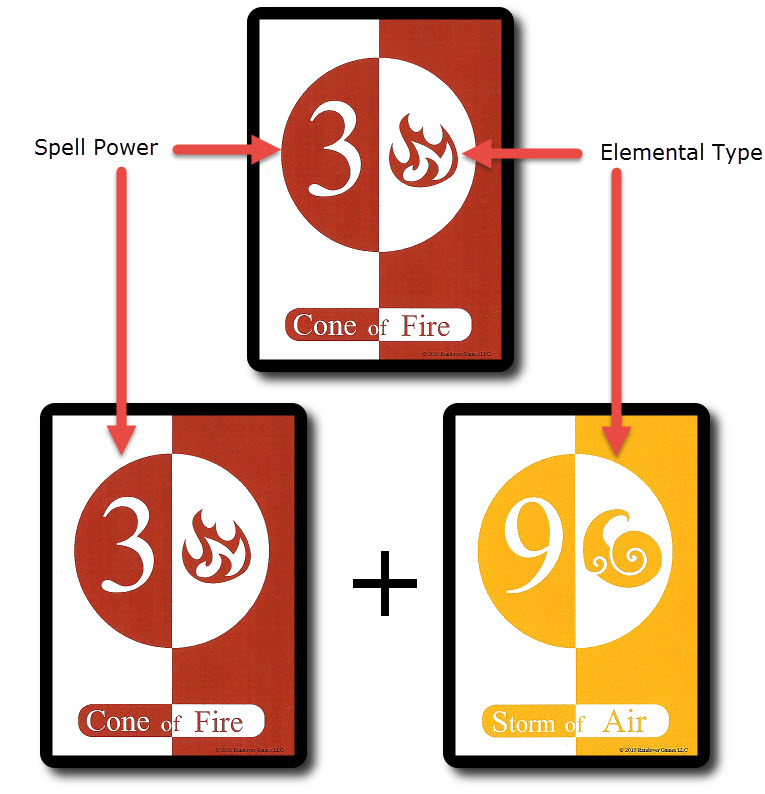 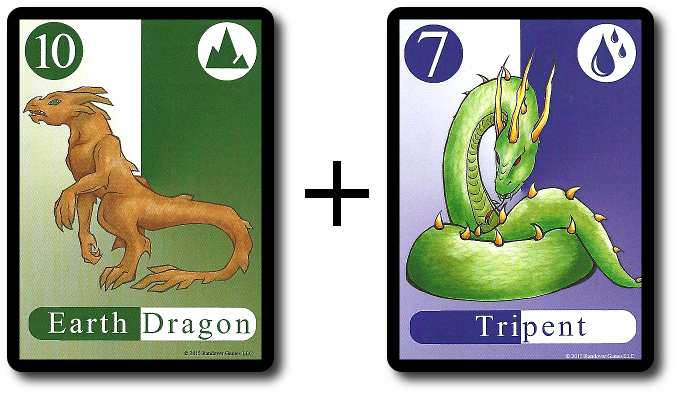 For both blending and grouping actions, no more than 2 cards can ever be used. Additionally, the cards cannot share the same Power or Elemental type. However, the player can blend and group at the same time during their turn, opening a wide door of opportunity.

If a player cannot capture a Creature card, they must still play a card from their hand. This card goes to the Spell Pool for all the players to use. The player can select any card they like, but should avoid playing a card to the Spell Pool that can be easily used by an opponent.

It he player ends their turn without any Spell cards in their hand, they replenish their hand by drawing a maximum of 4 new Spell cards from the Spell draw deck. Towards the end of the game, it’s possible that the player will not be able to draw all 4 cards. The Spell discard deck is not shuffled to create a new Spell draw deck, making each Spell card a limited resource.

For the most part, magic is a pretty stable business. The days of wizards blowing up their towers or witches turning whole villages into newts are in the past. Magic does still present a danger to those who don’t know how to wield it responsibly, but it also offers an adventurous magic user an opportunity to bend the rules. The best and most widely used example are the Wild Spell cards. They allow the player to either select the Spell Power value or the Elemental Type. If paired together correctly, the player can cast any spell they like. 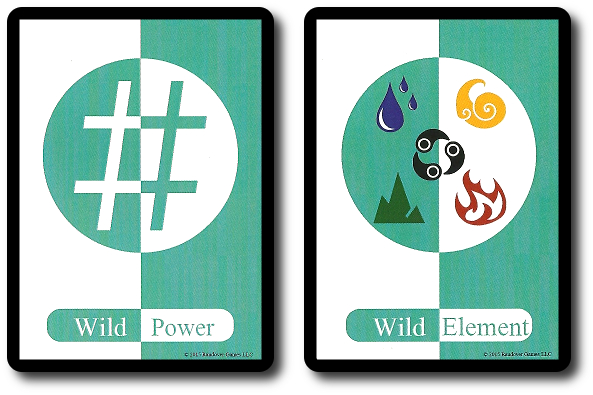 The game ends one of two different ways.

To learn more about Cast & Capture, visit the game’s web page or visit the Kickstarter campaign.

The Child Geeks jumped right into Cast & Capture. The game’s simple rules and straight forward game play allowed the Child Geeks to learn the basics quickly and get into the game’s action. According to one Child Geek, “I really like this game. Combining spells and monsters together is a lot of fun, especially when you capture a lot at one time!” It was the “rush” of capturing more than 1 Creature card at a time that drove most of the excitement. Opponents were even cheering on each other when a simple spell was able to capture more than 2 Creatures in a single casting. Another Child Geek said, “The only thing I don’t like about this game is the scoring. Other than that, I really like the game.” The scoring was mentioned by a number of our players (we’ll talk about that a bit later), but the rest of the game was enthusiastically approved by the Child Geeks. 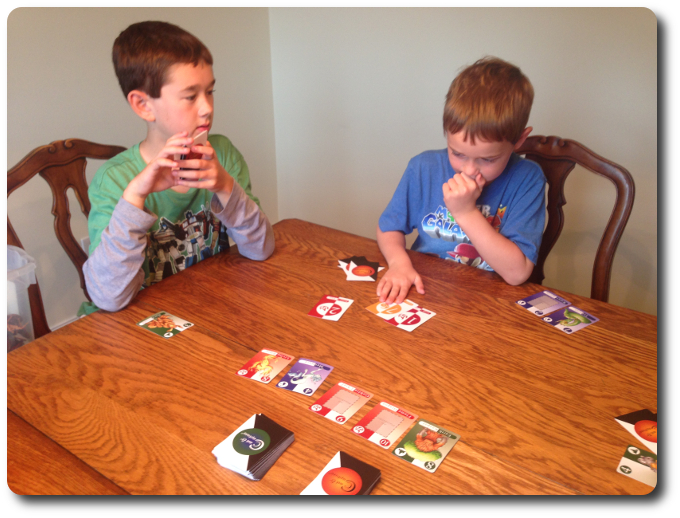 The Parent Geeks had played games like Cast & Capture before and had no problem learning how to play the game. Non-gamers, casual players, and more enthusiastic Parent Geek gamers all enjoyed the game both with their peers and with their families. According to one Parent Geek, “I’ve played a game like this before and I remember liking it. I like this game, too. The challenge is using just the right number of cards to collect the most Creatures as possible. The entire experience feels very satisfying.” Another Parent Geek said, “This is one of those games I can get to the family gaming table and enjoy with everyone. Kids, parents, grandparents, everybody!” When all the games were over, the Parent Geeks unanimously agreed to approve Cast & Capture.

A number of our players didn’t care for the game’s method of determining the winner. The current method is to count the total number of Creature cards. I must point out that this method works well, so there is nothing really broken here, but this did not satisfy some of the players and their need to compete at a higher level. Instead, they wanted to count the Creature Power levels as points. We tried this method and it worked great, adding a bit of depth to the game, making grouping of Creature cards all the more interesting, and the game more competitive.

I enjoyed Cast & Capture. It took me back to an earlier time when I played games with my grandmother and cousins. All we needed was a deck of cards and a piece of paper to keep track of scores. We played Casino a lot, among other easy card games, and I was pleased to see how quickly the Child and Parent Geeks took to the game.

I was not surprised by the Gamer Geeks’ reaction. Cast & Capture is a fast and casual game, but it’s not very deep and the amount of strategy and tactics necessary are slim to none. The game’s simplicity does not diminish the game’s entertainment value, as the Gamer Geeks begrudgingly admitted. Cast & Capture is a breezy affair that can be played with little effort, demanding just enough of its players to pay attention on their turn, but nothing more.

I would recommend Cast & Capture to Child Geeks and Parent Geeks, to casual players and non-gamers. The Gamer Geeks might find some nostalgic value, but little more. They have long since moved on to more complicated and deeper games, and would find Cast & Capture lacking what they normally hunger for.