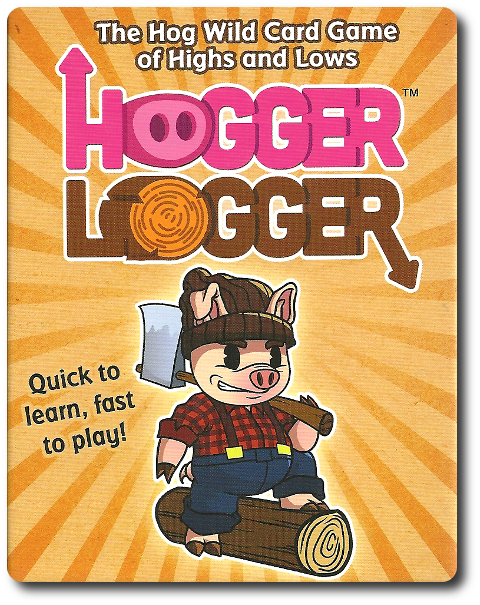 Greek philosopher and mathematician, Plato, said “A good decision is based on knowledge and not on numbers.” An agreeable point of view that is not always possible to achieve. Sometimes we have to make choices based on instinct and assumptions, hoping that luck, not knowledge, is on our side.

Hogger Logger, deigned by Shawn Duenas, Ryan Shapiro, Charlie Winkler, and published by Hogger Logger LLC, is comprised of 75 Number cards, 25 Action cards, and 7 Victory cards. The cards are as thick and as durable as your standard playing card. The illustrations by artist  Christian Jang are colorful and cartoonish, adding a fun bit of flair.

To set up the game, first separate the deck into 3 different card types: Number, Action, and Victory cards. Set the Victory cards to the side.

That’s it for game set up. Determine who the first Guesser will be and begin.

Hogger Logger is played in rounds with no set number of rounds per game. A round of game play is summarized here.

Draw the top 4 Number cards and place them in a row, face-down, making certain none of the players see the Number card values. Then draw a 5th Number card and place it face-up directly below the line of face-down number cards. This face-up Number card is referred to as the “Current Card”.

Finally, deal each player 3 Number cards. This is the player’s hand for the round. Cards in a player’s hand should be kept hidden from opponents until played.

The round’s Guesser must now announce if they think that one of the face-down Number cards values is lower or higher than the Current Card value. This is done by simply saying “High” or “Low”. The Guesser need not say how high or how low. A Number card value could be anywhere between “1” and “15”. Therefore, if the Current Card value is a “14”, the odds are very good that the value of any face-down Number card is lower.

After the Number cards are played and the Guesser gives everyone one last chance to change the Current Card value, they again announce their guess and reveal any face-down Number card in the row.

Do not refill the row of face-down cards. 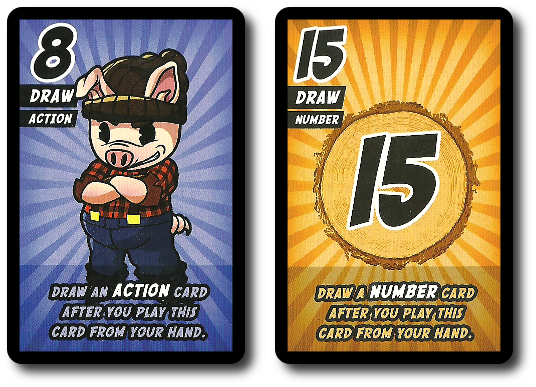 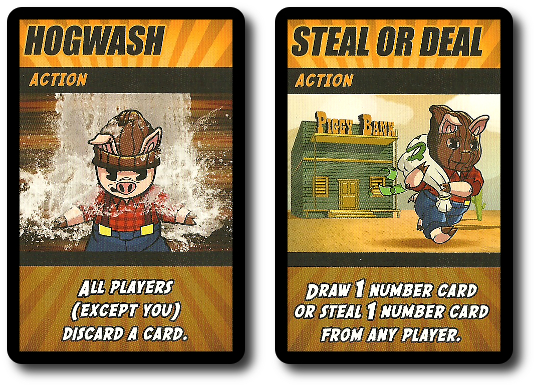 You will both love and hate Action cards…

As the round continues, different players will take turns being the Guesser. The only guess that really counts, however, is the last one. The player who correctly guesses the last face-down Number card in the row receives  1 Victory card. The round is then reset. All the played Number cards are placed in a discard pile. All unplayed Number cards in the players’ hands are also discarded. Any Action cards not played go to the Action discard pile. A new round is then dealt using the game set up instructions. The next player in turn order sequence is the round’s new Guesser. 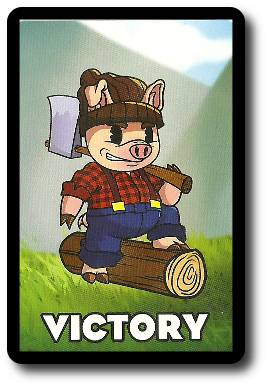 It’s very possible that the final face-down Number card is not earned right away, with one or more Guessers incorrectly guessing the high or low odds. The new Guesser is always the next player in turn order sequence. The revealed Number card becomes the new Current card and the topmost card on the Number draw deck is placed face-down in the row.

To learn more about Hogger Logger, visit the game’s website.

The Child Geeks got into the game right away, finding it fun to raise and lower the Current Card values and harassing each other with Action cards. According to one Child Geek, “My favorite thing to do is change the number at the last-minute just to mess with the Guesser.” And mess they did. Another Child Geek said, “This game can be really hard because the numbers keep moving about really fast.” Yes, they do, but the only number that ever matters is the Current Card value. What came before it is no longer of any concern. This made it easy to guess, but the constant changes made some of the younger Child Geeks feel a bit stressed, but not frustrated. The source of the real frustration came from bickering siblings, rather than changing number values. When all the games were over, the Child Geeks voted to approve Hogger Logger. 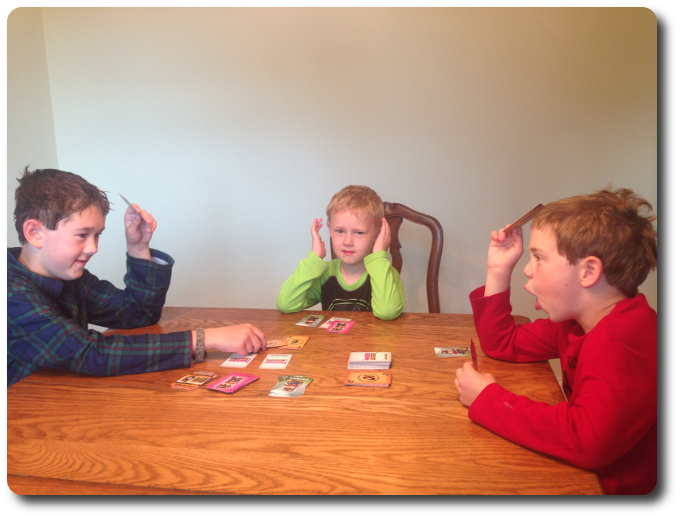 The Gamer Geeks did not care for Hogger Logger one bit. Some of them even became angry and belligerent whilst attempting to guess a high or low value. According to one of the calmer Gamer Geeks, “This game is horrible. All you are doing is guessing high or low. You might throw in an Action card, but what’s the point? There is no point. I’m dumber for playing this game.” Another Gamer Geek said, “This is not a good game, in my opinion. Or, to be fair, not a good game for people who enjoy games.” The repetitive game play, inability to use any semblance of tactics or strategy, and lack of depth made Hogger Logger a game none of the Gamer Geeks would endorse or would ever want to play again.

Personally, I don’t care for Hogger Logger because it’s just a guessing game. You could have the exact same game experience with a standard deck of playing cards. In fact, the game Hi-Lo (also know as High-Low) is Hogger Logger without the Action and Victory cards. You can play a variant of this game in Las Vegas for money if you like to gamble. None of which is bad, mind you, but I find nothing interesting about guessing over and over again. Hogger Logger isn’t so much a card game as it’s a guessing game that uses cards. That can get old.

But nor is the game a complete waste of time, as the Gamer Geeks would have us believe. The Action cards provide a brief reprieve from the monotony of guessing “high” or “low” turn after turn, round after round. As I mentioned, you will come to love and hate the Action cards during the game. They mess things up, but they also shake things up, giving players something new to do and to think about. The other saving grace is the ability to adjust the Current Card value. If “8” is considered the halfway point between high and low, a player can adjust the values and thereby tip the scales in their favor. Of course, so can everyone else. This makes the game something of a teeter-totter, but smart use of Number and Action cards gives the player more control.

Hogger Logger is a game I would eagerly recommend to the Child Geeks and the non-gamer Parent Geeks. This is a game I would never put in front of a gaming elitist out of fear they would beat me up. From a Gamer Geek’s point of view, this is not a game. I know that sounds mean and even stupid (because, after all, Hogger Logger is a game), but a Gamer Geek has certain criteria that their games must meet before they are considered “a game”. Hogger Logger doesn’t even come close to making the grade, as our observations prove. For everyone else, Hogger Logger will entertain, if not delight.