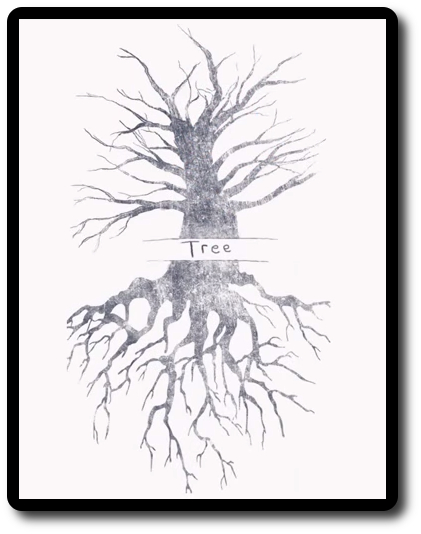 Thomas Carlyle said, “When the oak is felled the whole forest echoes with its fall, but a hundred acorns are sown in silence by an unnoticed breeze.” The death of something great is a visceral experience. Loss does not go unnoticed, but birth and new beginnings are sometimes ignored. In this game, players will grow a forest from a single seed and discover that the life of a tree is full of close calls and pitfalls.

Tree, designed by Steve Thaemert and published by Gigantopithecus Games via the Game Crafter, is comprised of 29 Treetop cards, 26 Root cards, 23 Dead Tree cards, 8 Firewood cards, and 1 Golden Spade card. The cards are as thick and as durable as your standard playing card. The illustrations are minimal and stylized, adding a touch of artistic elegance.

Second, deal each player 3 cards from the deck, face-down. These cards should be kept hidden from opponents until played.

Third, place the deck in the middle of the playing area, face-down. This is the draw deck for the duration of the game. Draw the top-most card and place it face-up next to the draw deck to start the discard pile.

Fourth, move the Firewood cards near the draw deck and discard pile.

Tree is played in turns with no set number of turns per game. A player’s turn is summarized here.

Players can play all, some, or none of their cards to the space in front of them during their turn. Once played to the table, the player cannot take the card back.

Each player can have up to 3 Trees in front of them. A Tree is comprised of Root and Treetop cards. To start a Tree, the player must play a Root “Seedling” card with the number value of “1”. Then the player can play a Treetop card with the number value of “1”. The player now has 1 Tree, albeit a small one. The main point to remember here is that everything starts with a “Seed”. 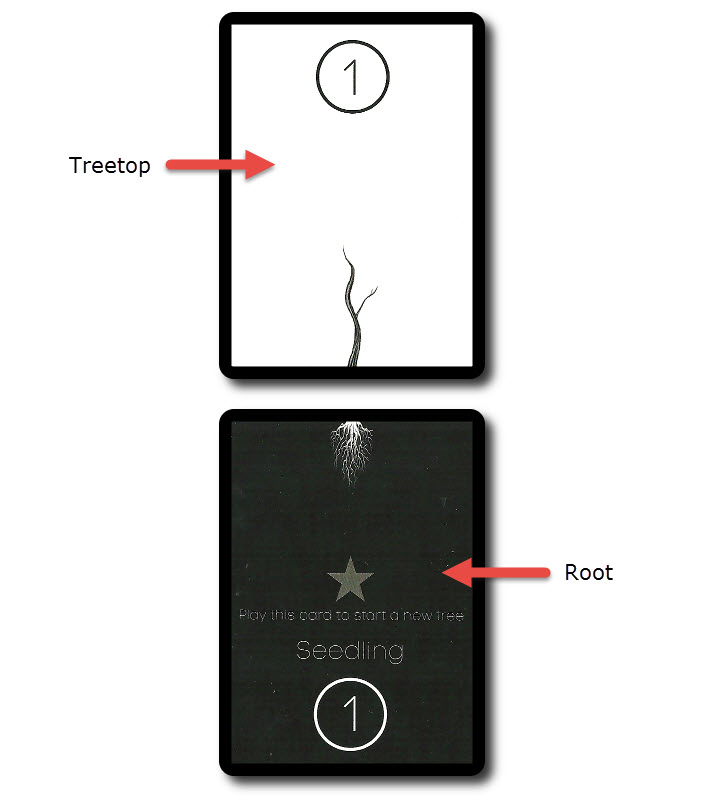 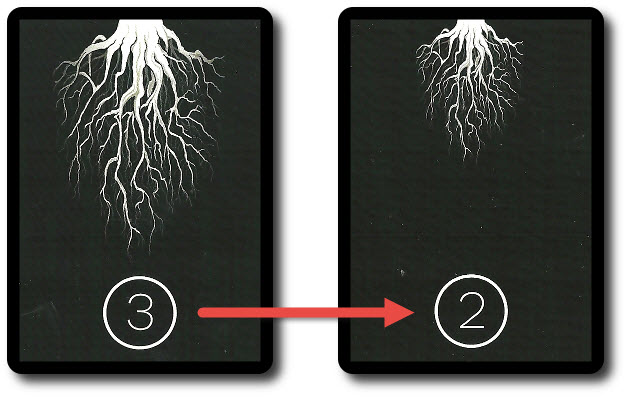 The Circle of Life never stops in the forest. A young seedling can grow to be a majestic forest sentinel or whither before the first winter. As an offensive move, a player can play a Dead Tree card on an opponent’s Tree to stop them from growing it further, making it a “Dead Tree”. The Dead Tree card is placed on the opponent’s Treetop cards belonging to one Tree of the player’s choice. For the duration of the game, the Treetop cards on the Dead Tree are not counted toward’s the opponent’s total points and the Tree cannot be grown. However, the Root cards and the points they provide do remain in play. 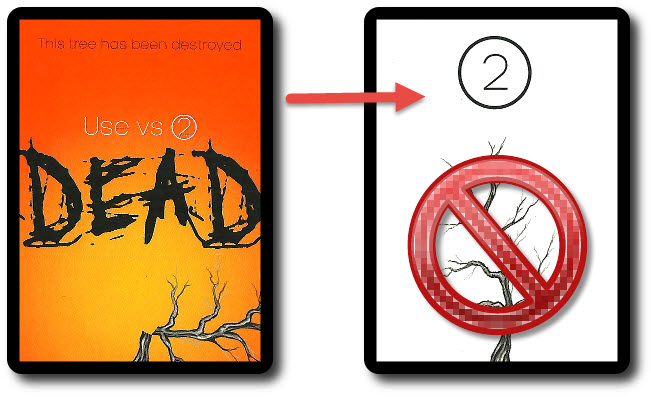 A player can also collect wood if they use a Dead Tree card that allows them to harvest. These cards are played the exact same way as the non-harvesting Dead Tree cards, with the same restrictions applying to what Treetops they can target. Once played, the Dead Tree remains in front of the opponent, but the player collects 1 Firewood card that counts as points. 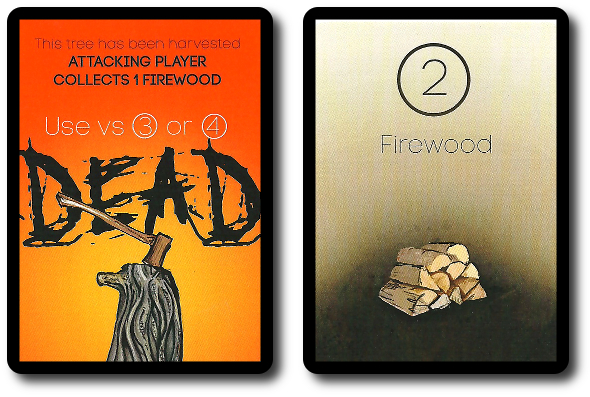 A player can protect their Tree by growing it to its maximum Treetop size. Once a Tree is comprised of a Treetop card with a number value of “5”, it’s invulnerable to all Dead Tree cards. It’s truly an old sentinel of the forest that has lasted generations and might last many more to come. 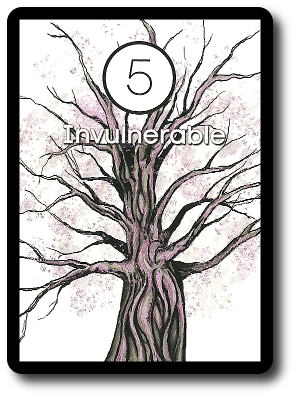 When a Tree dies, it remains in front of the player. The Dead Tree counts towards the player’s 3 Tree limit, as well. If a player ever has 3 Dead Trees in front of them, they are out of the game. The Golden Spade card can be played to completely uproot and remove a Dead Tree and living Trees, as well. This includes old sentinels with a Treetop number value of “5”. The Tree targeted by the Golden Spade can belong to the player or an opponent, making it both an attack card and a defensive card. The Tree (including the Treetop and Root cards) are discarded and the Golden Spade is removed from the duration of the game once used. This is a handy way to make room to grow a Tree, but doing so removes any points earned from the topmost Root card. 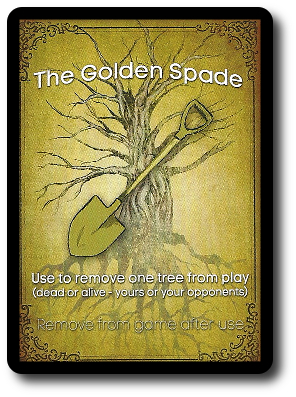 The game continues until 1 player has accumulated a total of 10 points. Points are calculated by tallying the topmost Root and Treetop cards on a player’s Trees, along with any Firewood cards they might have collected. The covered Root and Treetop card number values are never counted. The game could also technically end if only 1 player is left in the game. In which case, this player wins by default regardless of the number of points earned.

Players cannot start their forest unless they have a Root “Seed” card. These are randomly located in the deck, meaning the player might or might not get them in their initial hand or during the first turns of the game. Players found the inability to start a Tree to be very frustrating. To resolve this, we gave each player 1 Root “Seed” card and dealt 2 random cards as their initial hand. This way, each player was given a seed to start a Tree, but it was up to the player to decide when they wanted to plant it.

To learn more about Tree, visit the game’s website.

The Child Geek liked Tree for the most part, but it was difficult for them to like a game that allowed players to quickly take away that which they worked so hard to collect. According to one Child Geek, “I don’t like that I cannot defend my tree. It makes me feel bad when someone chops it down.” Another Child Geek said, “Growing a tree is hard! I have a hard time finding the right number and I always feel that the other players are going to take it away from me.” Luckily, a single game doesn’t take very long. If a game wasn’t going well for a Child Geek, they just had to wait for the next one. The wait times were normally pretty short, allowing the Child Geek another chance to grow their forest before they became overly frustrated. The end result was a mixed review from the Child Geeks. They didn’t love the game, but nor did they hate it. 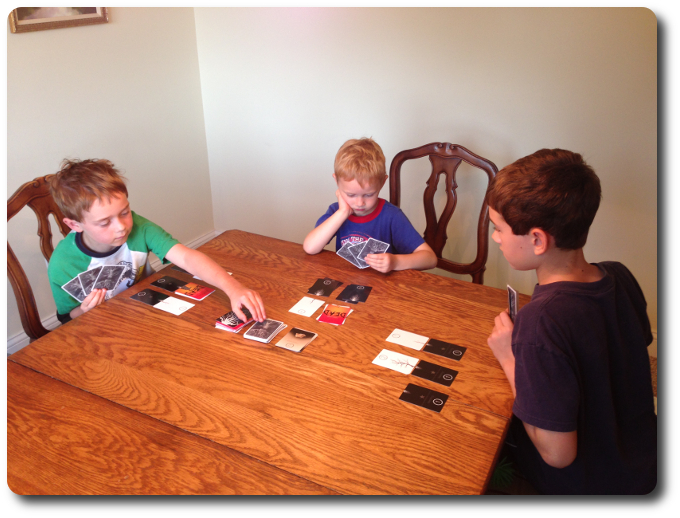 It quickly became clear to my Child Geeks that anyone with a tree was going to get the ax.

The Parent Geeks felt the same way as the Child Geeks. They enjoyed the game’s visual presentation and the theme, but found that their Trees were hard to grow and exceedingly vulnerable. According to one Parent Geek, “This game would have us grow trees, but doesn’t give us the opportunity to do so effectively. It’s frustrating.” Another Parent Geek said, “I always seem to have attacking cards and Tree cards that I will need later, but never the cards I need now.” Indeed it seemed that it was either “feast or famine” when it came to the cards. The Parent Geeks either had what they needed or couldn’t get what they wanted. As one Parent Geek put it, “An interesting game that makes you think hard about where you want to spend your time, but I never seem to get the cards I want as quickly as I need them.” When all the forests were grown, the Parent Geeks gave Tree a mixed review.

The Gamer Geeks were not impressed with the game. According to one Gamer Geek, “A neat concept, but I think the random distribution of the cards and the strict rules that determine how a Tree can be built hold it back. The game hurts itself by not allowing the players to actually do what they need to do sometimes.” Another Gamer Geek said, “Too random and too chaotic for me. Everything feels luck based, both with lucky timing and lucky card pulls. Worse of all, everything can get chopped except for the big tree that is impossible to grow. Wait! I take that back! The Golden Shovel can kill anything. No fun being a tree in this game.” The Gamer Geeks all agreed that Tree was better for younger and less experienced players and not a game for elitist gaming veterans.

The game has a nasty flaw that is inherent to many card games. If you cannot blindly draw the card you need or are lucky enough to have it on top of the discard pile when you need it, you are stuck. There were a number of player turns where cards were drawn and then discarded without a single tree maturing. Worse yet, it’s very possible that one player remains treeless while their opponents happily grow their little forest, thus leaving the player in the sawdust (see what I did there?). This cannot be avoided unless you use our suggested House Rule, which works very well, but doesn’t save players from not getting the cards they need.

Games that leave players behind generate a lot of animosity. An opponent skunking another opponent is one thing, but when a game doesn’t allow a player to keep up and interact at the same level with everyone at the table, the game feels broken or unbalanced. Tree suffered a lot of this, with players continually asking if they just had a bad hand or were unlucky. Drawing from the Discard pile helps, but I observed most players tenaciously holding on to cards as long as possible and drawing blindly in a desperate attempt to change their fortune. Lots of drama for a game about growing trees.

Overall, I found this game to be so-so. It’s light and casual, allowing players to socialize while enjoying the challenge of planning a forest surrounded by hostile forces. The ability to kill other opponents’ Trees is a mixed bag at best. Some of our players flat-out hated it and believed it broke the game. Most players found the Dead Tree cards to be a nuisance when they were targeted and a clever ploy to get ahead when they used them. Our observations suggest that the aggressive nature of the Dead Tree cards are not so much a detractor as they are an unwelcome addition to the game play.