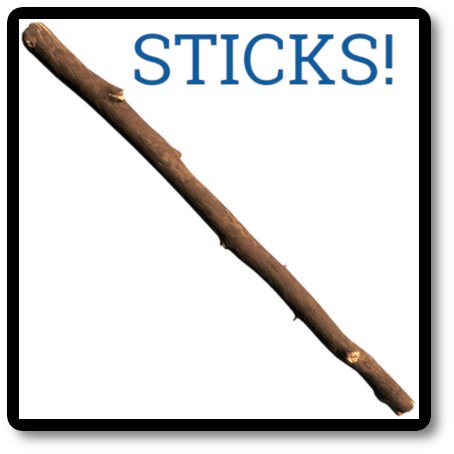 British author, speaker and international advisor on education in the arts to government, non-profits, education and arts bodies, Sir Kenneth Robinson, said “Creativity is putting your imagination to work, and it’s produced the most extraordinary results in human culture.” Imagination is truly powerful, and the more we use it, the better it becomes. In this game, simple rules and game components give the players just enough to get them started and nothing to hold them back.

Sticks!, designed by Henry Farnsworth Wellington the Fourth and published by My Word! Games, is comprised of four sticks (roughly 3 feet in length), a small knife, and a box of band-aids. The stick is made of solid oak and is very durable. The knife is nothing to be excited about, but it can be very sharp. The band-aids are your standard fare in the colors of pink, blue, and mauve. Overall, good quality right out of the box. 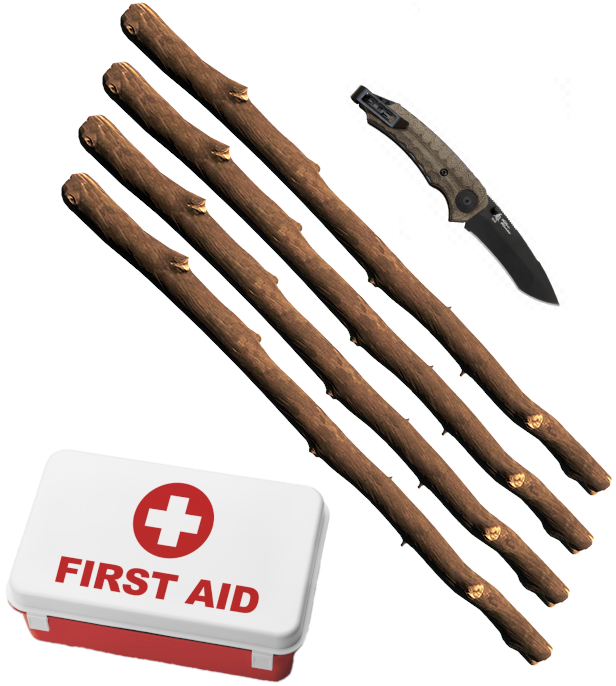 What you get in the box

Note: The sticks are not sharpened when first removed from the box. The supplied knife is meant to sharpen the sticks, however, the base games describe in this review do not require the sticks to be altered. See “Game Variants” for advanced play.

To setup the game, first designate a playing area roughly 30 feet by 30 feet at minimum. A backyard will do nicely or a playground. It’s not recommended that this game be played indoors, but it certainly can be if the area is free of obstructions and breakables, such as lamps, pictures, and babies.

Second, create a team of two-players each or a free-for-all. Hand each player a stick and a hard look of determination. A grunt at this point and a quick head nod is appropriate while making eye contact.

Fourth, designation one player to be the “Yeller”. This individual will be responsible for announce when the game starts, ends, and for running for medical support if there is a need. It’s advised, although not required, that the Yeller not be a younger sibling who has a penchant for tattling.

That’s it for game setup. Have the Yeller start the game and begin!

Sticks! can be played in four different ways. Each of the games are summarized here.

When playing this game, each player places one hand behind their back, keeping their other hand free to hold the stick. The goal is to fight your opponent with your stick like it was a sword. Caution should be taken to not accidentally strike your opponent in the hand when swinging.

This is a variant of Sword Fight, but the players are allowed to use both hands on their stick, providing a stronger, but much slower swing.

When playing Tag (not suggested for team play), one player is the “Tagger”. This individual runs around smacking the other players in the butt. When smacked, the player who was hit is expected to shout an obscenity and then becomes the new Tagger. At which point, they run after whomever is around, but in most cases, the target is the previous Tagger. Feel free to add our House Rule of “No Hit Backs” to ensure that all players have an opportunity to be the Tagger.

When playing Free For All, there is only one rule: there are no rules. The objective is to be the last one crying or who has not run off for home. This game tends to be very intense and is not recommended for Child Geeks under the age of five or older Parent or Gamer Geeks who are over the age of 40.

Included with the game is a small knife. This can be used to sharpen one end of the stick. This is for advanced play only and introduces the new rule “First Blood” which automatically causes all players to lose if any player is struck hard enough or jabbed to cause a wound. The game designers did a great job here and provided a small box of band-aids, knowing full-well that advanced play would lead to such an end.

Sticks! can be played with two to four players out of the box. If you want to play with additional players, purchase another copy of the game. It’s not recommended that players just go off into the trees to pick up a stick to use due to the inconsistency of length and weight of other sticks.

To learn more about Sticks!, visit the game’s website.

The Child Geeks had a great time with Sticks!, preferring the Free for All game version . According to one Child Geek, “I think this is my new favorite game to play outside. Especially after the really long winter we’ve had. I’m going to go introduce this game to my friends!” And off he ran across the street yelling, “Guys! Guys! I got a game we can play!” Cute kid. Another Child Geek said, “I like it when you are winning, but Andy and Jason swing too hard and they don’t pay attention to the rules. They are kind of jerks, but Mom says I have to play with them because we are related.” True enough, the game can be difficult for younger players who can either not follow the rules or simply have no patience for shenanigans. Regardless, all the Child Geeks voted and approved Sticks!

The Parent Geeks were horrified. According to one Parent Geek, “Are you serious? This is a game? I think the sticks are good quality and all, but a knife? Oh, hell no. Not in my household.” Another Parent Geek said, “I like how the game teaches commitment and fortitude, but I’m not a fan of how loss the rules are. I like playing it with my kids, but I feel that I outmatched them. For example, I played with my daughter and her friend the other day and they both ran into the house crying after only a minute or two of the game. I just don’t see this being something we play often.” When all the votes were in, the Parent Geeks rejected Sticks! out of horror and disappointment in its replay value.

The Gamer Geeks were not impressed. According to one Gamer Geek, “I’ve seen this type of game way too many times. I like its old school feel and even give an approving head nod for the knife, but the entire game just feels tired. I wish the board game designers out there would start thinking of something new and ground breaking rather than just repacking previously released games with the same old themes.” Another Gamer Geek said, “I played this type of game as a kid and would play it with my kids, but for adults? I don’t think so. Not much depth to it and the path to victory is way to simple.” When all the votes were in, the Gamer Geeks decided to reject Sticks!, preferring instead to go roll dice and lean over a table rather than go outside and get some fresh air.

I remember this game fondly when I played it as a kid and still venture out into the woods to find “swords” and “guns” that are made out of wood. There is just something very wholesome and meaningful about swinging a stick around and chasing younger siblings. For me, this game calls to mind simpler days and long summers, when the flavor of Kool-Aid was the most important thing and Saturday Morning Cartoons were worth damn. Sticks! is, in two words, pure nostalgia.

Which is also something of a problem for the game. In an age where everything is online and requires some sort of power source to enjoy, releasing an interactive game that requires its players to put on some pants and shoes, running around and possibly getting a bit sweaty, is a hard sell. Still, I like what this game is all about, but not fully. As a Parent Geek, I like the idea of playing the game with my kids and sharing my memories with them as we create new ones as a group. But also, yeah, I’m smacking my kids with a stick which in most cultures is frowned upon. I personally don’t play the advanced version of the game, preferring to keep the sticks in the same shape they arrived. I’m weird that way with my games which is exactly why I don’t own any legacy games.

Overall, I’m most pleased with the game. What it lacks in sophisticated charm it more than makes up for it with wholesome brute force game play. If you think this game is for you, pick up a Sticks! and start swinging!