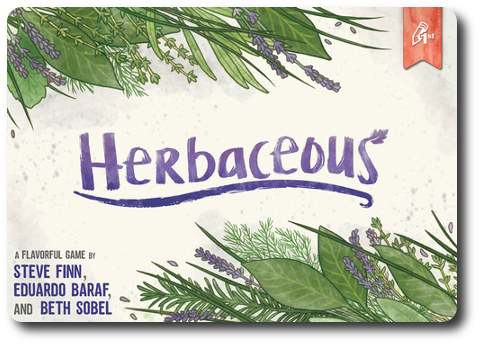 Eighteenth century poet, Minnie Aumonier, wrote “When the world wearies and society fails to satisfy, there is always the garden.” Many find solace when they bend a knee and dig their hands in cool earth, planting seeds and growing abundance. But gardening can be intimidating and requires a great deal of patience. In this game, players will exercise their green thumb and plant a herb garden, one of the best and easiest ways to get into the gardening habit. But don’t rush it.

Herbaceous, designed by Eduardo Baraf, Steve Finn, Keith Matejka and published by Pencil First Games, is comprised of 63 Herb cards, 9 Special Herb cards, 16 Container cards, 4 Garden markers, 1 Herb Biscuit card, and 4 Reference cards. The cards are as thick and as durable as your standard playing card. The illustrations by Benjamin Shulman and Beth Sobel, while minimalistic, are colorful and add just enough visual interest to make the cards easy to spot while not overwhelming the eye with a great deal of detail.

Let’s Go to the Garden

Second, shuffle the Herb and Special Herb cards together to form a single deck. Randomly remove a set number of cards from the deck by dealing them to the game box without looking at them. The number removed from the game is based on the number of players.

Third, place the deck of cards face-down off to one side of the game playing area and within easy reach of all the players. This is the draw deck for the duration of the game. Next to it, place the Herb Biscuit card.

Fourth, make sure the middle of the playing area is free of cards. This area is referred to as the “Community Garden”. Give each player a Garden marker that matches their player color and have them place it so their Private Garden and the open Community Garden areas are separated by the player’s Garden marker.

Digging in the Dirt

Herbaceous is played in turns with no set number of turns per game. A player’s turn is summarized here.

Step One: Pot Those Herbs

This is an optional step which can be skipped by the player on their turn. On a player’s first turn, they will not be able to take this step. 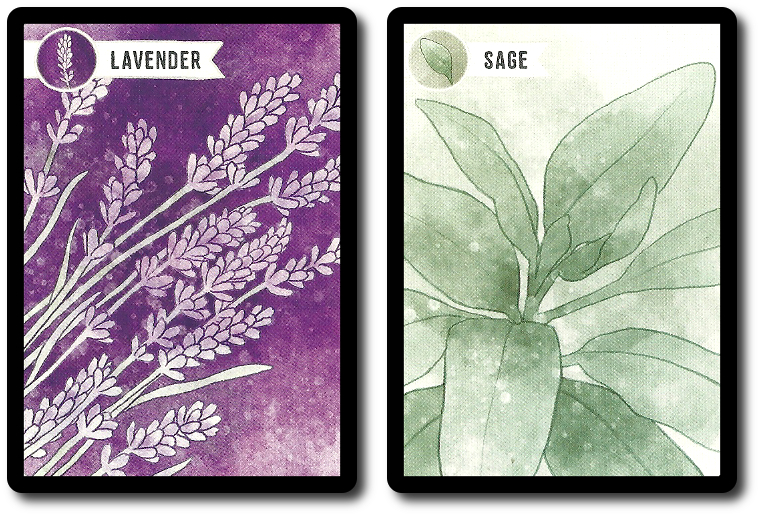 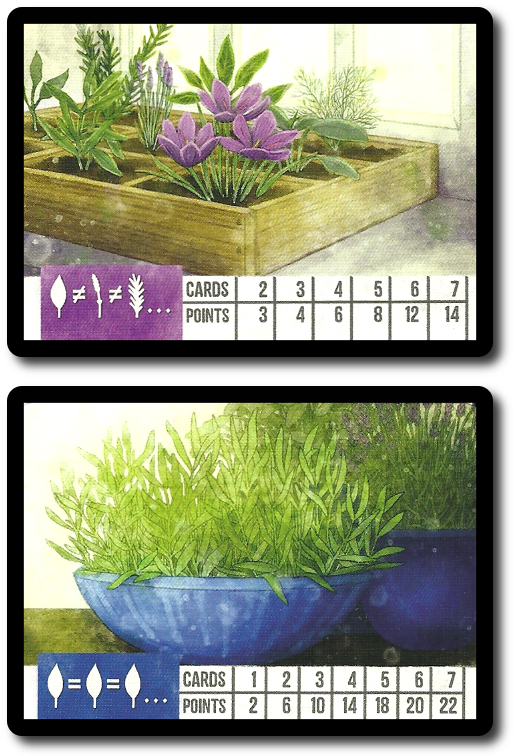 As an extra bonus, the first player to plant a specific set of Special Herb cards in the “Glass Jar” Container card collects and scores the Herb Biscuit card. 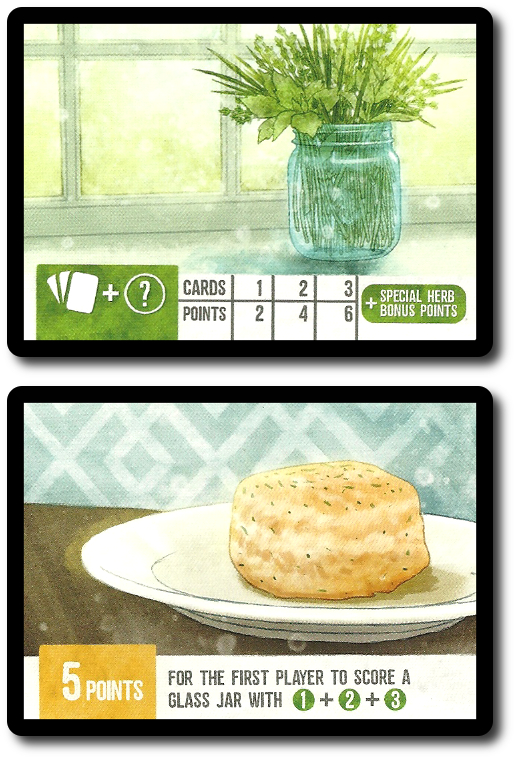 While step one was optional, step two is mandatory, but only if there are still cards left in the draw deck. If the player has potted all their Container cards, they must still take this action.

The player draws the top-most card and reveals it. They must then either play it to their Private Garden area or to the Community Garden area, face-up.

A Garden of Plenty

The endgame is triggered when the draw deck is exhausted. All players continue to take their turns as normal (except for drawing cards), focusing instead on potting as many Herbs as possible. The game ends when all players have used their Container cards or no player can pot additional Herbs.

Players now determine their score by matching the number of cards under each Container card to the Container card’s score guide. The player who earned the Herb Biscuit card adds five bonus points to their score. In addition, players earn one additional point for every Herb and Special Herb in their Private Garden that was not placed under a Container card.

Herbaceous can also be played like a game of Solitaire. The player draws cards one at a time, adding them to their Private Garden, a Community Garden, or to a discard pile. The game ends when the player cannot pot any additional Herbs or the draw deck is exhausted. Points are then scored and recorded. The player then attempts to beat their score in subsequent games in hopes of obtaining the title “True Green Thumb Harvester” (which requires 57 or more points to earn).

To learn more about Herbaceous, visit the game’s web page.

The Child Geeks enjoyed this game, although I am fairly certain that very few of them ever felt like they were planting herbs, let alone understanding what an herb garden was all about. Which doesn’t matter, as the game is all about collecting sets and making important choices about when to play them. According to one Child Geek, “I think the game is pretty easy to understand and fun to play. I really like that we have our own cards, but share cards too.” Another Child Geek said, “The hardest part of this game is not getting upset about what you planted later in the game when the perfect card suddenly shows up.” Players will be hit again and again with hindsight, but the game is light enough to never make any decision feel momentous. There is no such thing as a “bad play”, but there will most certainly be regrets. What was not regretted was the time spent playing Herbaceous and all the Child Geeks voted to approve it.

The Parent Geeks, green thumb or no, enjoyed digging deep into the game and getting to business. What they found was a game that had just the right mix of casual game play with a touch of competitiveness that kept everyone looking at the table and in the game. According to one Parent Geek, “I really like games like this. A light theme, with light game play makes for an excellent combo that continues to be fun to play with my family and friends.” Another Parent Geek said, “Without a doubt, this game is my kind of game. Pleasant to look at, fun to play, and always a challenge. It hits all the right marks with me.” The Parent Geeks all agreed that Herbaceous was the kind of game they would gladly play again and again, with their peers and growing family.

The Gamer Geeks all agreed that Herbaceous was a well designed game, but that is never enough to satisfy the gaming elitists. As one Gamer Geek put it, “I think the game is entertaining, but that doesn’t mean I automatically think it’s a game for me. [The game] is a bit too light for my taste, but I wouldn’t have any problem playing it with my non-gamer friends.” Another Gamer Geek said, “I think the game is pretty solid. I’d play it as a filler and wouldn’t think twice about introducing it to new players.” When the votes came in, the Gamer Geeks gave Herbaceous a mixed level of endorsement, but they were careful to say why. For those who voted for it, they found the game to be a perfect example of what a light filler should be. Which is to say, from their point of view, engaging with light game play. None of the Gamer Geeks flat-out rejected it, but there were enough elitists who suggested that Herbaceous, while a good game, was not nearly heavy enough to make it something they would want to play.

Herbaceous is a very pleasant game. Light in its execution with enjoyable game play that challenges the player with interesting choices, but never feels like a struggle. To put it another way, Herbaceous is similar to a cup of good tea with a touch of milk and honey. You drink this game in slowly, enjoying the moment. It’s clear why the game appealed so greatly to casual players. What was surprising was how more elitists players didn’t shun the game outright, who would rather drink a bitter brew that challenges the palate. Turns out there is more than enough “game” in Herbaceous to appeal to a gamer, providing a light challenge with just the right level of engagement to keep everyone at the table happy. Albeit not completely satisfied.

I enjoyed the game and always feel very fortunate to find games like Herbaceous. As a gaming elitist, I am continuously hungry for a game that provides an experience, challenges me, allows for improvement, and continues to surprise. As a Dad, I am looking for games that fit in my busy family schedule, appeal to my children, and can be taught and played in less than a hour. As an adult and gaming ambassador, I strive to introduce others to games that are off the beaten path, but are approachable and easy to learn, providing players with a new take on what a game could be. It’s my opinion that Herbaceous is the kind of game that provides value to all three of my goals. I have yet to introduce it to anyone who was bored with it and, as of the writing of this review, it has been lent to five people with four other families in line to borrow it next. If that is not a sign of a good game, I don’t know what is.

Do give Herbaceous a try when the opportunity next presents itself. I think you’ll find its mellow goodness to appeal to the gamer in you, served with casual game play that will relax you at the same time. If only real gardening was this easy, fun, and relaxing. Or maybe it is and I’m just not doing it right. Look, I could ruin toast, people, so who knows.

One Response to Herbaceous Game Review