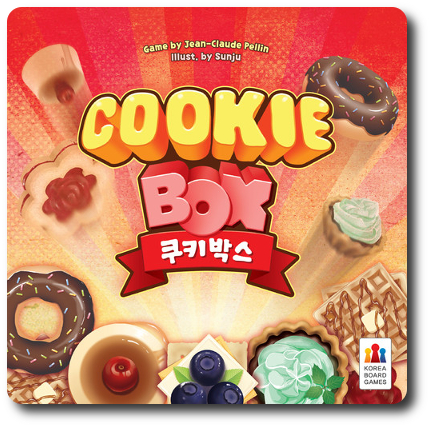 American pastry chef, television celebrity and cookbook author, Johnny Luzzini, said “Baking is about multi-tasking. If you are organized and prepared, that’s half the battle.” Cooking is as much an art form as it is a science, and by “art form”, I mean juggling. In this game, players will be challenged to keep a cool head, focused attention, and be as fast as possible doing both.

Cookie Box, designed by Jean-Claude Pellin and published by Korea Board Games, is comprised of 36 double-sided Cookie tokens (9 per player), 30 Order cards, and 1 hand-rung bell. The component quality is excellent. The tokens are made of thick plastic, the Order cards are as thick and as durable as your standard playing card, and the hand-rung bell can really taking a beating. Which it will..

To set up the game, first give each player a set of 9 Cookie tokens (which will all be the same token color). These should be arranged by the player so they form a 3×3 grid. The facing of the tokens is unimportant during the game setup.

Second, shuffle the Order cards and place the draw deck in the middle of the playing area.

Third, place the bell in the middle of the playing area, as well, and within easy reach of all the players.

That’s it for game set up. Time to box those cookies!

Cookie Box is played in rounds with no set number of rounds per game. Each round begins with one player drawing the top Order card and placing it face-up in the middle of the playing area.

As soon as a player believes they have duplicated the cookie arrangement found on the Order card using their Cookie tokens, they ring the bell. The round immediately pauses.

Either way, the round now ends. A new round now begins with a player drawing a new Order card. Players do not rearrange their Cookie tokens prior to the next round. They play them from the position and facing from the previous round.

The game continues until one player scores four Order cards or all but one player is eliminated from the game.

The Child Geeks were both amused and frustrated with this game. Those Child Geeks who were able to keep their cool and remember the position of some of the tokens did far better than those poor Child Geeks who spent a great deal of time and energy shifting and re-shifting their tokens, mostly because they lost track of what was where. According to one Child Geek, “I hate this game. It makes me angry and frustrated.” And yet, another Child Geek said, “I really like this game! It is challenging and fast, but pretty easy if you just keep track of where your tokens are and you keep calm.” Cookie Box polarized our younger Child Geeks into two camps. Those who enjoyed the sweet challenge of the game and those who quickly thought the cookies were too bitter to enjoy.

The Parent Geeks, being older, wiser, and far more emotionally resilient, found Cookie Box to be a good challenge, with a nice touch of chaotic game play. According to one Parent Geek, “The game seems simple enough when you explain it, but in practice, it can be very challenging!” Another Parent Geek said, “A good exercise in quick memorization, coordination, dexterity, and focus. It’s as much a puzzle as it is a race. I really enjoyed it.” All the Parent Geeks enjoyed themselves and voted to continue eating the game up. Depending on the age (and temperament) of their Child Geeks, Cookie Box was found to be a good family game, too.

The Gamer Geeks liked the challenge of the game, but found the game play to be stale. According to one Gamer Geek, “Games like these are good for families, but I’m looking for a game with a lot more depth and a hell of lot less repetition.” Another Gamer Geek said, “Games like this can be challenging, but it wasn’t any fun for me. The entertainment comes in trying to beat your friends with speed and a bit of luck, which I enjoy with my family, but not with my gamer adult friends.” All the Gamer Geeks decided to give this box of cookies of pass.

Cookie Box is a challenging game of pattern recognition with a sprinkling memorization, a generous helping of speed and dexterity, and more than shake or two of personal emotional poise. This recipe yields a game that feels very rewarding when you win, but most of the time feels like hot stick of butter in the eye. Which is to say, players will lose more than they win. Not a terrible thing, but when we factor in how hard some players attempt to win, the sound of the bell being rung by an opponent can quickly make a player’s heart sink.

Which I think is great and what kept me interested in the game. I like games because they challenge me to work out problems out out-think my opponent. Cookie Box focuses a bit more on being faster than your opponent, too, but speed does not make up for levelheadedness and focus. I found that the real challenge in Cookie Box is keeping your head down and concentrating. There is a lot of noise and distractions to be had as your opponents dash and grunt, slap tokens, and quietly curse. Believe me when I say you’ll be doing the same and when you do, DO NOT LOOK UP! Even just a glance at your opponent to the left or right of you will force you to refocus, resulting in a loss of momentum.

Cookie Box isn’t going to be for everyone, but it will most certainly challenge any player who sits down for a game or two. How this cookie crumbles is doing to depend on where you find your fun. If you like a game that takes a fast mind and a fast hand, Cookie Box is for you. If you are not, you won’t have much to snack on here. Try it and see if you can cook up some fun.