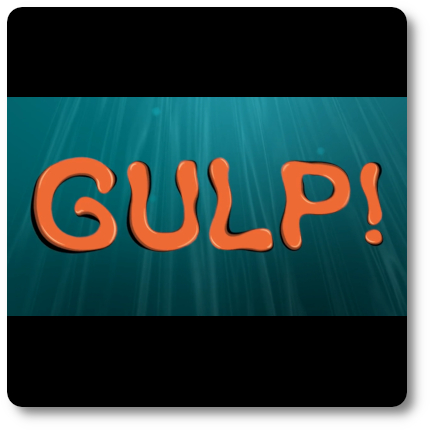 American astronomer, cosmologist, astrophysicist, astrobiologist, author, science popularizer, and science communicator in astronomy and other natural sciences, Carl Sagan, said “Extinction is the rule. Survival is the exception.” If such is the case, than life is a continual struggle at every level. Take, for example, the trials and tribulations for all below the waves of our oceans. Every fish is a potential meal and the line between life and death is just a bite away.

Gulp!, to be published by Good Nature Games, will reportedly be comprised of 49 tiles. As this is a review of a prepublished game, I cannot comment on the game component quality. The review copy we were provided included thick cardboard tiles that were very durable. The illustrations of the different sea life portrayed in the game were colorful and easy to spot when playing. 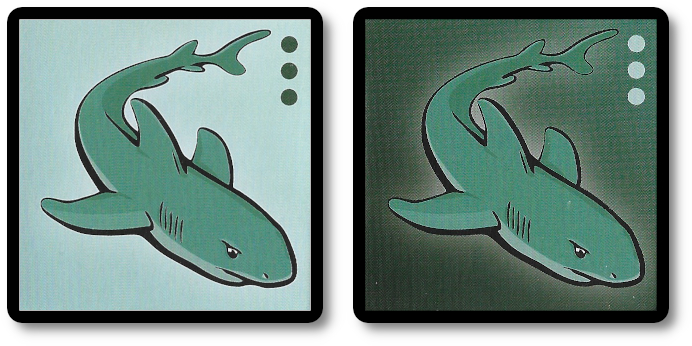 Both sharks are jerks and are lousy tippers

The only exception to this movement rule are the flying fish and parrotfish. These exotic underwater specimens can “jump” any number of empty “spaces” in any non-diagonal direction, but always in a straight line. 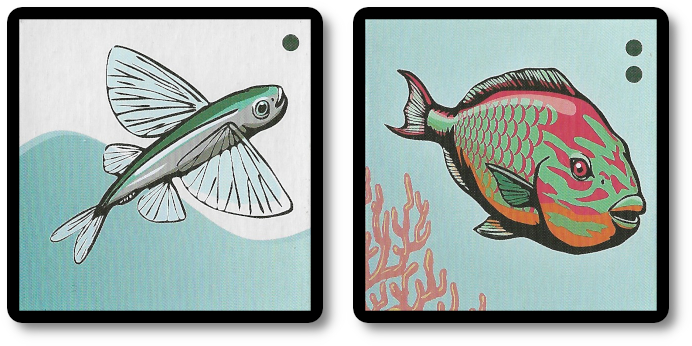 Ah, but there is a bit more to it than that. Wouldn’t be much of a game if this was only about stacking fish!

When moving, the top most visible tile determines the proverbial pecking order (the value) of the fish in the food chain. A tile of a specific value can land on any other tile that has the same or lesser value. For example, a “Shark” tile is the top of the heap and can eat any other tile including another shark. On each tile are three to zero dots. These dots help keep track of the tile’s value when moving it to encounter its next meal or to swim away from a bigger fish. When moving a tile, it must end on another tile that it “eats”. 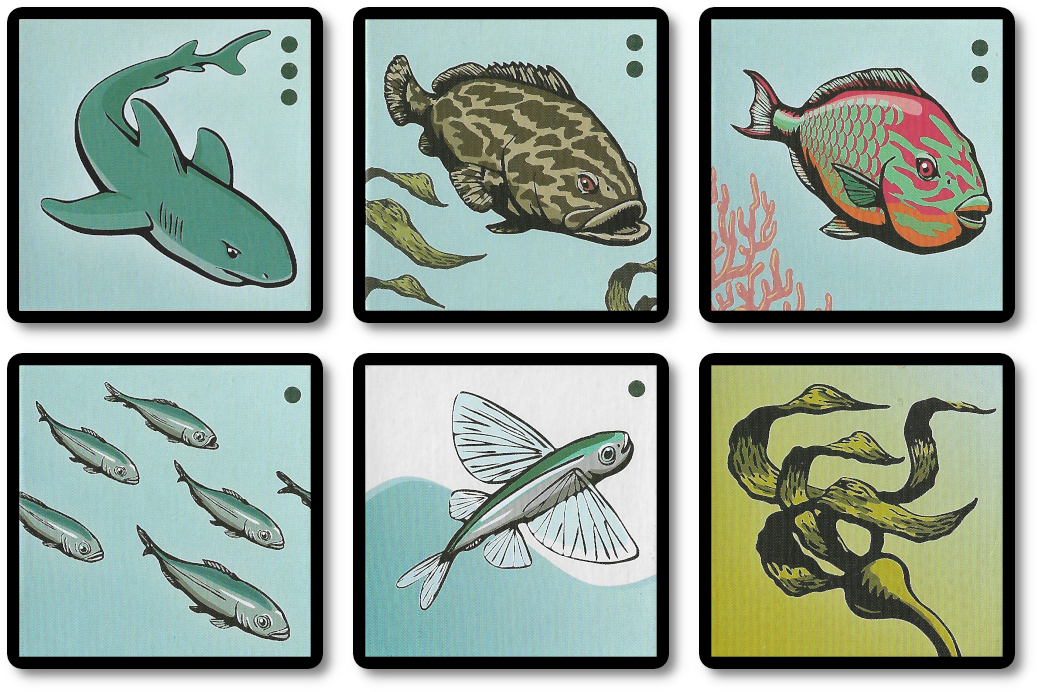 The “kelp” and “coral” tiles (kelp is shown in above image) are the only tiles that cannot be moved in the game. They can be eaten by any fish tile, however.

In the sea, the only rule is eat or die. Oh, and swim.

As the game progresses, players will be taking turns moving a single tile or a stack of tiles. If, after a player takes their turn, their opponent cannot make a move, the player can take another turn. This continues until both players recognize that neither of them can make any additional moves. At which point, the game ends.

Players now remove from the playing area all single tiles and stacks with their previously selected tile color shade showing. For every tile collected, the player earns one point. The player with the most points wins the game.

To learn more about Gulp!, visit the game’s website or Kickstarter campaign.

The Child Geeks liked the game, finding it easy to learn and engaging to play. The speed of the game and the gradual but well-paced growing complexity was remarked upon several times. According to one Child Geek, “The game gets harder as you keep playing it, but only the decisions you need to make. The game is easy to learn, just not easy to win.” Another Child Geek said, “My favorite part was moving my fish around like it was a Chess game.” Chess was mentioned a number of times by our players, and the similarities can only really be found in the tactical and strategic movement. Strategy is always the same: eat the most. But the means to which to do so keep shifting. To wit, all our Child Geeks kept making “gulp!” or “chomp!” sounds, with the loudness of each sound distinctly proportional to the Child Geek’s understanding of the size of the fish they were moving. It was adorable. When all the fish had their fill, the Child Geeks voted to approve the game.

The Parent Geeks also had a great time, finding Gulp! to be a game they could play with their kids just as easily as with their peers. According to one Parent Geek, “I like this game. I originally approached it as something as simple as just moving around and eating things, but the longer you play, you lose avenues for the same option. Feels like a slow burn, as the game gets continually more difficult.” Another Parent Geek said, “Easy set up and clean up, fast and fun, engaging and rewarding. I give it not five, but six stars.” Six stars is not a thing, but her joy in the game was palatable. It was clear that this little game about hungry fish satisfied the appetite of the Parent Geeks, resulting in the game being fully approved.

The Gamer Geeks were skeptical. Honestly, Gulp! is not a game that grabs the eye or the imagination when you look at it. Even after the game is set up, the game does not beg for your attention. It was only when the Gamer Geeks started to play it, and only half way through the game, that they started to see Gulp! in a new light. According to one Gamer Geek, “This was a game that snuck up on me. I didn’t think it would be worth putting on the table, but I was proved wrong. There is a surprising amount of depth for such a simple and small game. Very entertaining.” Another Gamer Geek said, “No matter how good I thought I was, I worked for victory. I actually worked harder than I thought I needed, but I don’t see how one cannot help to lean into this game and take it seriously if they hope to succeed. A real surprise and I think an excellent filler.” When the last fish was in the net, the Gamer Geeks reviewed their haul and voted to fully approve.

This is a game that can be taught to anyone with ease, be they casual players or gaming elitists, and challenge the lot of them. The game rules are bonehead simple. I mean, really, really simple. I described how to play the game in less than two minutes and even then the game is intuitive.

But its simplicity is just as much a lure as it is a smokescreen. With each tile moved, be it a single tile or a stack, the different paths for movement change. You can expect to suddenly see a portion of your fish tiles outnumbered or cut off from the rest. Safe, sure, but no longer a means to a possible victory. Players have to think through their immediate move while planning their next. Baiting in this game is a must, as it serves as a viable method to steer your opponent in a different possible direction in hopes of not making it obvious. Which, depending on your opponent, might be a difficult venture.

My only complaint is lack of markings on the flying fish and the parrotfish. These “special fish” don’t move like the others, but they have the same values as “normal fish” and nothing on the tile face to suggest they should be considered slightly differently than the rest. This was a design choice error, in my opinion. I reminded players one to many times about these special fish that far outweighed the game’s complexity. But without using these fish the right way, players lose half the game. Hopefully this will be addressed before the game is published for mass production.

Other than that, great stuff. Gulp! plays well and kept me interested, but only after I started playing. Like I said, this game has no table appeal. But look beyond its lack luster presentation and you have a game with teeth. Aptly titled, this game will swallow you up if you don’t pay attention. This is a thinking game, make no mistake, but the effort one must use is brief and intense. Not burnout here, just solid problem solving and critical thinking.

If you are looking for a small game that will make you sweat, but not make you all wet, jump into this ocean and swim with the fishes. Gulp! is a tasty treat that you will enjoy snaking on again and again.