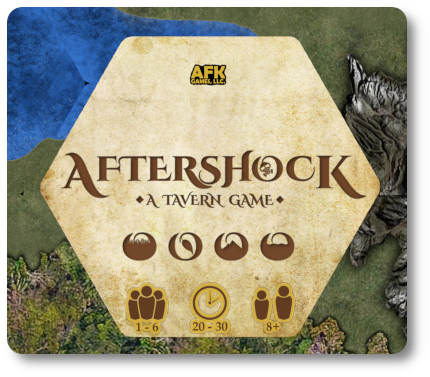 Indian economist and an international academician, Raghuram Govind Rajan, said “Competition is like a treadmill. If you stand still, you get swept off. But when you run, you can never really get ahead of the treadmill and cover new terrain – so you never run faster than the speed that is set.” But what if you could shift the direction in which that treadmill was moving? Say, from going forward to backwards and then sideways? That would certainly cause many to fall on their face. In this game, expect the ground you are building your victory upon to shift without warning.

Aftershock: A Tavern Game, designed by Martin Stack and published by AFK Games, is comprised of 60 hex-shaped cards. The cards are as thick and as durable as your standard playing card. Artwork is minimal, representing nine different varieties of four basic terrain types. All of which look like they were generated by a computer. It works, but this game isn’t going to win over any art lovers. Not included with the game, but necessary to play, is a pen or pencil and a piece of paper to keep track of players’ scores.

Note: Aftershock is two games in one. Described in detail here is the game available for two to six players, named Fuddledich. The solitaire game, named Cartographer, is summarized in the Game Variant section of this review.

To set up Fuddledich, take the cards and shuffle. Place the deck face-down. This is the draw deck for the duration of the game.

Second, deal to each player five cards. This is the player’s starting hand. Cards should be kept secret until played.

That’s it for game set up. The player to the right of the individual who shuffled the cards is the “lead player” (first player).

Fuddledich is played in rounds (hands) and tricks with no set number of rounds per game. A single trick of game play is summarized here, starting with the lead player and continuing in turn order sequence. At the start of each hand, the lead player sets the terrain, which is similar to setting the suit in a traditional card game. Terrain types include grass, forest, mountains, and water, creating the four suits used in the game. In addition, the cards can have a single, dual, and triple terrain types, showing one or more of the terrains listed. 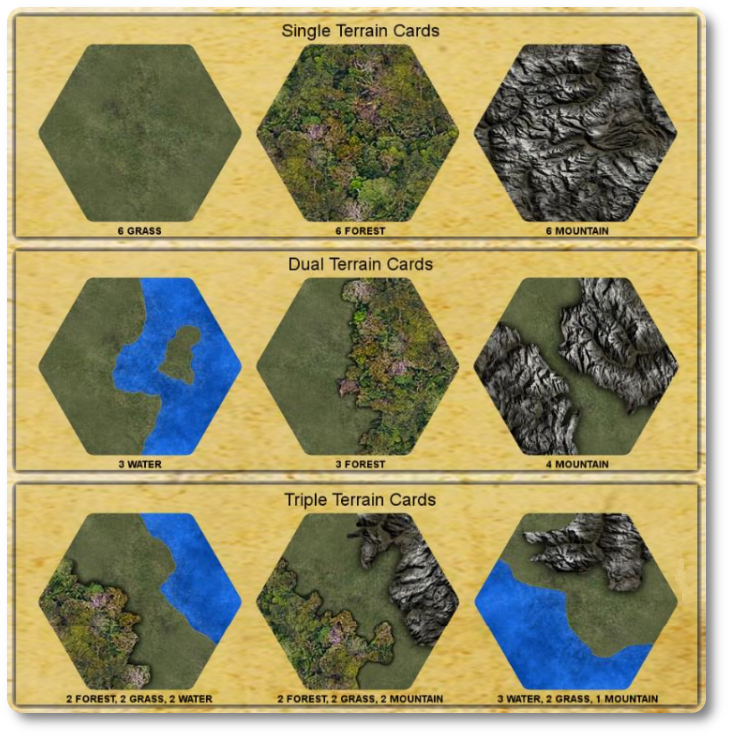 This is now the “lead card”.

After all the players have played to the round, quickly determine who won the trick by finding which player owns the lead card. This player has won the trick and collects the cards, placing them face-down in a pile next to them in what is referred to as the “winning trick pile”.

When there are no more cards left in the draw deck, the round is over. Each player counts the cards in their winning trick pile. The number of cards counted is the player’s score for the round, which should be written and added to any earlier scores recorded.

If the point threshold has not been met (by default, it’s 100 points) the game continues with the previous lead player taking the cards, shuffling them, and dealing five to each player.

If the point threshold has been met, the player with the most points wins the game.

Included with Aftershock are rules for a solitaire game named Cartographer, which is more of a puzzle game than anything else. The goal is to create a large single land mass using as many cards as possible by matching cards by terrain type on their edges. While playing, one should attempt to create “clusters”, which is a minimum of six cards in a honeycomb shape with or without a center. The cluster can then be removed and added to the player’s score pile. If the removal of the cluster breaks the landmass into two or more parts, the player first reshapes the “world” before continuing to play by moving all the played cards together. The game ends when the draw pile is depleted and all the cards that can be placed are on the table. The player counts the number of cards in their score pile, thus giving them their score. No scoring table is provided suggesting how well one did, but it can be correctly assumed the goal is 60 points (as there are only 60 cards).

To learn more about Aftershock: The Tavern Game, visit the publisher’s website.

The Child Geeks were fairly ho-hum about the game, finding it to be easy to learn, but not all that engaging to play. According to one Child Geek, “The game is OK, but I’m pretty sure I played a game just like this but with normal cards.” Further questioning did not lead to a game name to be provided, but the Child Geek is not wrong. The main game, Fuddledich, does feel like any other trump and trick game, but with terrain instead of numbers and standard playing card suits. Another Child Geek said, “The game with friends was OK, but I preferred the solitaire game. It was fun trying to put it together as a puzzle and see a world being built.” This is where the game did much better. Visually, Aftershock provided the Child Geeks entertainment, but as a game, not so much. The end result was a mixed review from our youngest and newest players.

The Parent Geeks, especially those who play a lot of card games, liked some of the new rules that Aftershock introduced. Specifically, the many ways the terrain can be shifted throughout the game, making card plays more interesting. According to one Parent Geek, “Some neat ideas here, but ultimately, just another card game.” To which some Parent Geeks found it a bit gimmicky. As one Parent Geek put it, “Terrain instead of your traditional Jacks and Queens is fine, but I don’t think it’s a necessary or even a desired shift from the norm. Seems to be the only thing the game has going for it.” It was when we introduced the solitaire version of the game, that the Parent Geeks understood the importance – and reason – of Aftershock’s design choice. Some of our Parent Geeks tried out the solitaire game and enjoyed it, finding it to be a mix of frustration and fun that worked. When all the votes came in, Aftershock didn’t rattle enough pillars to do damage or make a big dent, resulting in a mixed endorsement.

The Gamer Geeks were unimpressed. According to one Gamer Geek, “Just a card game with terrain instead of what you would normally see on a card game. Just because you change the card’s face doesn’t make it a new, or in this case, an interesting game.” The Gamer Geeks didn’t find the game rules to be complicate or confusing, but they did find the game play to be uninteresting. Since Aftershock is being positioned as a “tavern game”, we took it to a few local pubs and tap houses. Yes, the game plays just as well on a smaller table as it does at a larger table, but only because the game doesn’t need a lot of space. According to our report, beer and good food made the game more entertaining. As one Gamer Geek put it, “This is a game you play because you happen to have it with you, not because you necessarily want to play it.” The Gamer Geeks voted to reject Aftershock and had no interest in the solitaire version.

To me, this feels like a solitaire game that was positioned to be something more than what it was originally intended to be. The terrain doesn’t work as smoothly as I would like as card suits to decide trumps and tricks. Mostly because I squinted a lot. Difficult at times to see across the table to determine if the blotch of color is forests or mountains. This is especially true in dim lighting which is common in taverns around the world (at least those that I have been in). Don’t get me wrong, it all works, and the Aftershock rule is a nice touch – figuratively speaking – to shake things up.

The game is better as a solitaire puzzle. While I found Fuddledich to be straightforward and uninspiring, the solo game was a great time. Very challenging and visually interesting as the world you are trying your damnedest to make starts to take shape in front of you. Which, again, leads me to believe that this was a game that was designed for one specific purpose and then later expanded upon.

And while it has nothing to do with the game itself, I am compelled to mention that one of our Child Geeks found a third way to use the cards in a creative way. They used them to build a map for a world they were creating for a game. Took a long time to get it put together, but it worked and worked well. We slapped down a piece of plastic to keep the cards in place and the Child Geeks placed their miniatures on top of it. Again, nothing to do with the game, but it does open it up to further exploration of new games that could be made from it.

If you are a fan of cards games and looking for something different, do give Aftershock: A Tavern Game a peek. While we didn’t find the game to be earth-shaking, there is enough to the game to make your players tremble with excitement when they see a great card play. I think the real magic remains with Cartographer, but feel free to explore the game’s other possibilities.