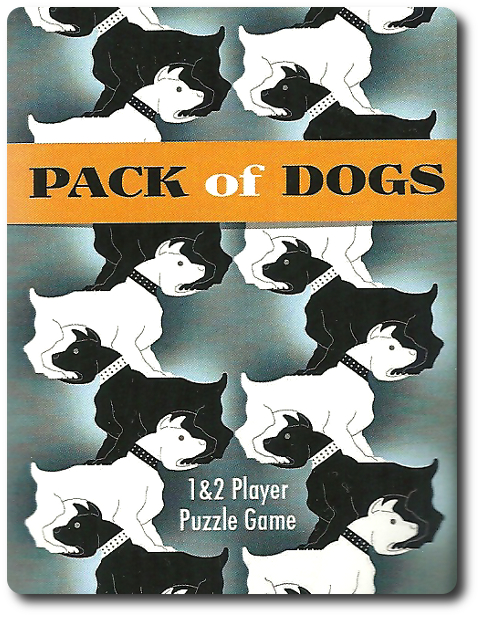 To be the leader of the pack, you must know when to lead and when to follow. Not an easy tasks when everyone wants to be the “top dog”.

Pack of Dogs, designed by Ivan Allen and published through the Game Crafter, is comprised of 32 double-sided cards. The cards are durable and about half the size of your standard playing card.

Like much of M.C. Escher’s artistic work, the game’s illustrations play with perspective and perception. Each card contains a small portion of a larger tile image. If the cards are positioned correctly and contain the correct colors, the final image will be a tiled mosaic of dogs that fit seamlessly together with no empty space between each dog image.

Depending on which game type is played, the players will score points by matching dog images that have matching colors or not. Players must always place the cards adjacent to each other in a way so the depicted dogs don’t become crazy mutated. For example, a dog with 2 heads. That’s just wrong. 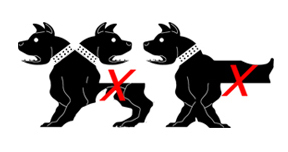 Solitaire challenges the player to duplicate the tile image shown on the back-cover of the game’s rule book by arranging the cards in a 4 x 8 grid. This is not an easy task as each card is double-sided and may or may not be usable in 1 or more places. Essentially, this is a puzzle. To win, the final image made by the cards must match the back-cover image on the rule book. Subsequent attempts to duplicate the image should be faster than the previous. 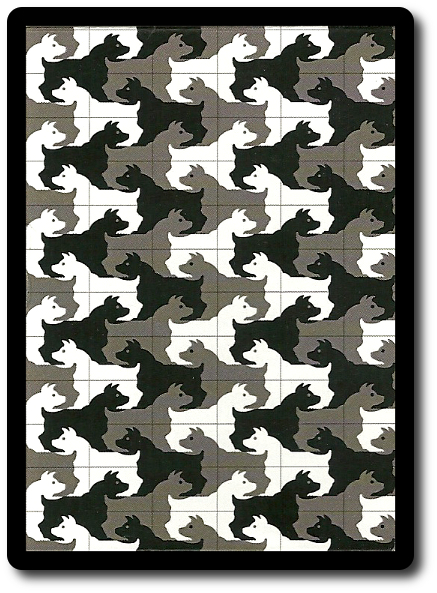 A Pair of Pooches

The 2-player game builds off the basic concept of matching colors, lines, and images in the Solitaire game and adds a competitive spin. Each player is attempting to be the first to complete the image of 3 dogs in the player’s selected color.

There are 3 colors in the game: black, grey, and white. Players will select either black or white for their dog color of choice. The cards are then shuffled and the player who is attempting to complete 3 white dog images goes first by drawing the top card and places it down in the middle of the playing area using either side of the card.

After that, the next player draws a card and places it adjacent to a played card (never diagonal). The player attempts to make a match using 3 rules that must be followed in subsequent order. 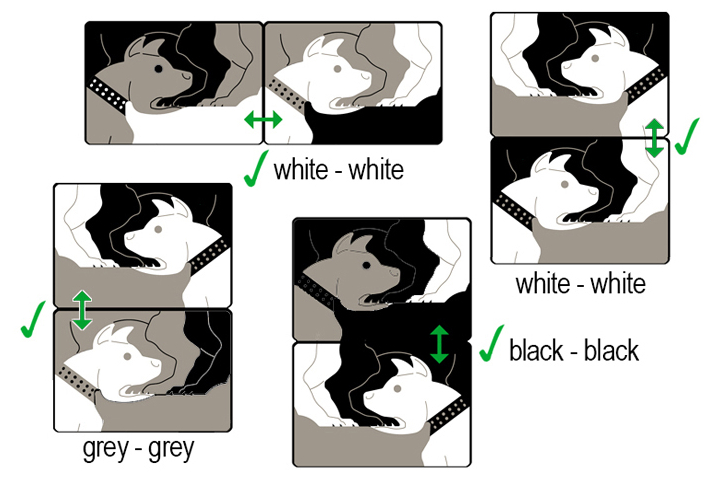 This continues with each player drawing a card, attempting to match their selected color to the cards already on the table using either side of the drawn card. If they cannot, they must use the grey color, and then their opponent’s color. Different colored dogs might be created. This is fine as long as they are formed correctly (there should not be any two-headed dogs, for example). Once a card is placed, it cannot be removed, moved, or flipped.

As the game progresses, a tiled image will begin to appear. 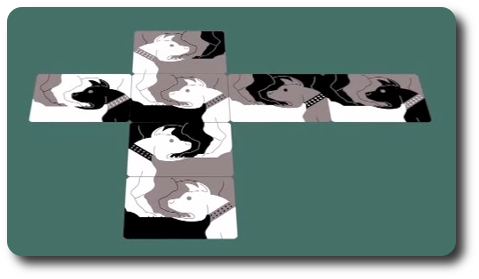 The first player to create 3 full dogs of their selected color wins the game. Multi-colored dogs do not count towards any player’s dog count. If a player completes their 3 dogs and their opponent’s at the same time, the game is a draw. If all 32 cards are used, the player with the most matching dogs wins the game, unless it’s a draw. In which case, shuffle and go again.

Several game variants are available for the 2-player game. Each are summarized here.

A player is not required to match their selected color when playing the 2-player game. Instead, they can draw their card and place it to block their opponent. The card must be placed using the same rules are described above, but the player has the freedom to disrupt their opponent.

This game variant makes the grey dog something to avoid. If a player creates a full grey dog during their play, they automatically lose the game. Since the player is forced to match the grey color if they cannot match their own color, this makes the game playing area a potential minefield.

If the player’s drawn card cannot be placed or if the player chooses not to place it, the card is sent to the bottom of the deck. This ends the player’s turn. The player’s opponent now gets to go, but can place 2 cards. This game variant gives the player the ability to not shoot themselves in the proverbial foot by being forced to place a card that benefits their opponent. However, by doing so, they might inadvertently being giving their opponent a sizable advantage.

To learn more about Pack of Dogs, visit the game’s web page. 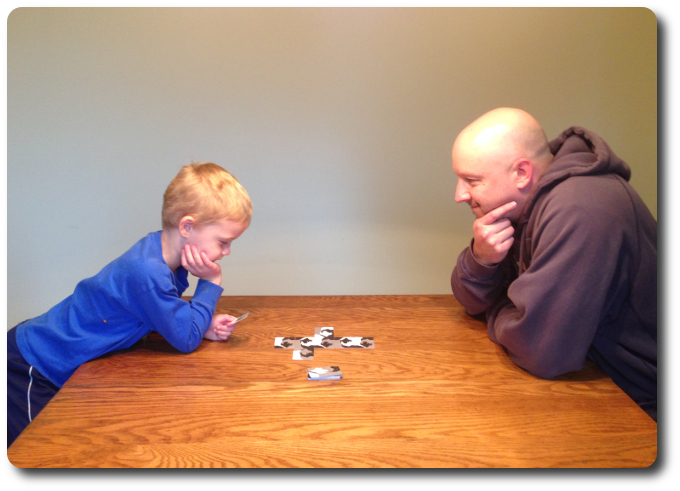 The Parent Geeks liked what the game was about, but found the game play to be repetitive and predictable when playing with their peers. According to one Parent Geek, “You always do the same thing. Draw the card, attempt to fit it using your colors, then the grey, and then your opponent’s color. I never have any say in the game. It got boring fast.” Another Parent Geek said, “I felt like the game was a competitive puzzle, where my opponent drew a piece and then I drew a piece, and so on. Yes, that’s visually interesting as the puzzle slowly gets built, but I found it to be slow and repetitive.” With their Child Geeks, the Parent Geeks changed their tune. They rather liked playing Pack of Dogs with their kids, but the same level of repetitive game play was mentioned again and again. According to one Parent Geek, “An easy game to teach, a good one to play with kids, and light enough keep my kids interested. That’s pretty good, in my book.” When all the dogs were back in their cages, the Parent Geeks gave Pack of Dogs a mixed level of endorsement.

The Gamer Geeks liked the Escher inspired image and how the cards fit together, but that’s about it. According to one Gamer Geek, “Not much of a game here. Matching lines and colors has been done before and done well. I’d say the same for this game, but it falls flat for me. I don’t like not having a hand of cards to pick from.” In fact, all the Gamer Geeks disliked that they could not collect a hand of cards to play from. Being forced to draw a card and play it each turn made the game’s depth of play feel very shallow. Another Gamer Geek said, “Neat concept, and visually very interesting, but the game play is not that interesting after a few cards.” Which is to say, the Gamer Geeks always felt like they had a choice and the choices available were always pretty obvious. When the games were over, the Gamer Geeks gave Pack of Dogs a head nod for its creativity, but a thumbs down for its game play.

Pack of Dogs is a light game. If you go in thinking otherwise, you are going to be disappointed. It’s small, compact, and best of all, requires very little space. Perfect for your traveling games or for those lighter game night sessions when there are only 2 players twiddling their thumbs. But it’s repetitive and it’s predictable. It’s not a game that will challenge you so much as occupy your time.

Many of our players disliked the fact that they couldn’t have a hand of cards to pick from. If I was playing Pack of Dogs with gaming elitists, I would totally agree. When you play the game with younger and less experienced players, having each player draw the top card makes the playing field balanced. I cannot devise a strategy if I never know what my card will be or what the card layout will look like until after my opponent’s turn. On the other hand, the younger and less experienced players need only focus on the card they have at the moment and place it where they think it’ll have the best possible impact. Many found this restrictive, but sometimes you have to put the brakes on some players to allow slower players to catch up.

The Game Variants for Pack of Dogs are an absolute must. I recommend you don’t play a single game without them. They give the player back some choice and the ability to plan ahead. Not a lot, mind you, but enough to make the player’s turn just a bit more complicated and a bit more fun.

I found Pack of Dogs to be “OK”. Nothing great, but not bad, either. Its light game play and easy learning curve make it simple to introduce and to play. It has enough visual interest to keep younger and less experienced players focused, but fails to leash the more experienced players to the gaming table. Still, an interesting game with an interesting idea. If you like the sound of this dog’s bark, throw it a bone and give it a try.