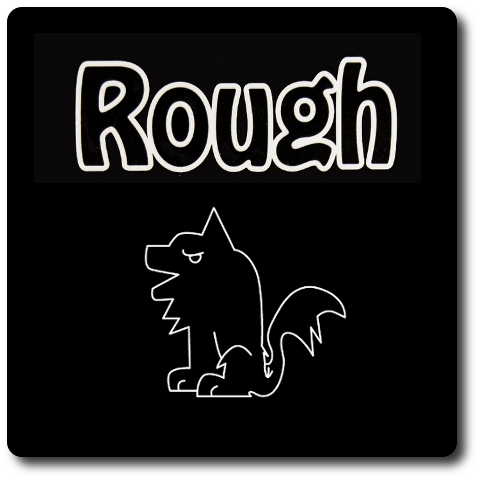 John Wayne said (and I absolutely love this quote) “Life is tough. but it’s tougher if your stupid.” Life has a way of being tough and rough with even the smartest of individuals, not just the dumb ones. We take our hits and sometimes we can easily jump up and other times we need a helping hand. In this game, you need to like it rough if you want to enjoy yourself.

Rough: The Card Game, designed by Jeremiah E. Jones, Joseph Francis Sammarco, Monica Joy Scott, Justin Mark Seuthe, Eric Bryan Seuthe, II, Jensen Michael Wilhelm, and published by Monkey Finger Games, is comprised of 151 cards. There is no artwork to speak of other than that found on the game’s box and card face. The cards are durable and as thick as your standard playing card. The game is very text-heavy, meaning players must be able to read if they want to play. Not included with the game, but necessary to play, are a few props. For example, a bowl full of marshmallows.

To set up the game, first determine the level of game difficulty. The cards are numbered from 1 to 4, with 1 being the easiest and 4 being hardest. And by “hardest”, I mean immediate elimination from the game versus attempting to save your place at the table. Players should feel free to pair different number values together or use all the cards at once if they really want to.

Second, remove and set aside all the cards with the selected number values and all of the “N/A” card values, as well, that will be used in the game. All other cards are returned to the game box.

Third, shuffle the cards together to create the draw deck. Deal 5 cards to each player, face-down. This is the player’s hand. Players should keep their hand of cards secret from their opponents. Place the draw deck in the middle of the playing area, face-down. Leave room for a discard pile.

Rough is played in turns with no set number of turns per game. On a player’s turn, they select 1 card from their hand and play it to the discard pile. Each card played is considered a “challenge” that must be overcome. There are 5 different card types and each type presents a different challenge. Each type is summarized here.

Solo Challenge: This type of challenge only targets 1 player. The player will either pass or fail. 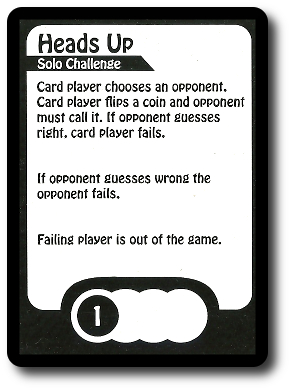 Duel Challenge: This type of challenge is shared by the player and 1 opponent of the player’s choice. The first to fail the challenge looses. 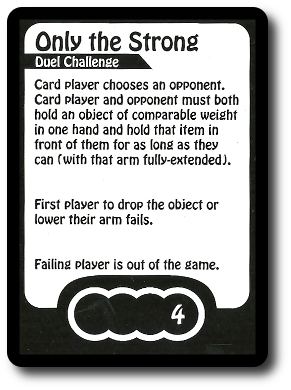 Team Challenge: This type of challenge involves 2 or more players. The challenges usually consists of players having to keep track of a growing amount of information. Failure to remember means failure in the game. 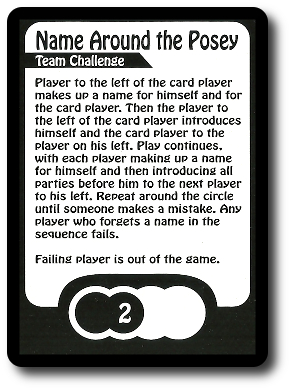 Action Card: This type gives the player an opportunity to take a special action. The action sometimes comes with a challenge, making the Action card something like the Solo Challenge. 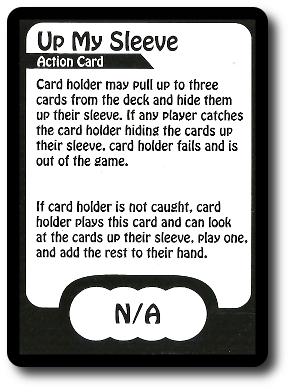 Worthless Card: This type of card really and truly is worthless. The individual who has this card in their hand is doomed to lose the game unless they can work around it. 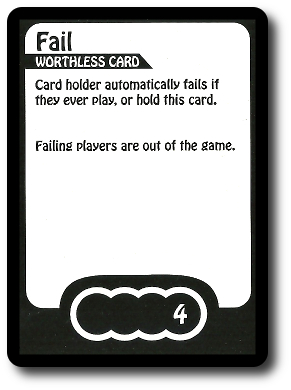 After playing a card, the next player in turn order sequence plays a card and so on. If one or more players disagree with how the rules of the cards should be interpreted, the game pauses until the argument is resolved.

When directed to, the player will draw a card from the draw deck.

Rougher Than the Rest

When the last card from a player’s hand is played, they are out of the game. The game continues until only 1 player is left. Regardless of the number of cards in their hand, they are the winner.

To learn more about Rough: The Card Game, visit the game’s web page.

At first, the Child Geeks enjoyed the game. They liked the silly stunts the players had to pull and the out-of-nowhere cards that ejected a player from the game. But the level of fun quickly dwindled when it became clear to the Child Geeks that this was a game that didn’t have much in the way of law or order. They started to feel picked on and cheated. According to one Child Geek, “I think this game is broken. It’s like the people who made the game didn’t want anyone to play it.” Another Child Geek said, “I don’t like this game. You can’t win. Even if you have good cards, something stupid comes along and you are out of the game without anyway of defending yourself.” The few laughs the game got were replaced by grumbles and then sour faces. The Child Geeks voted to reject Rough. 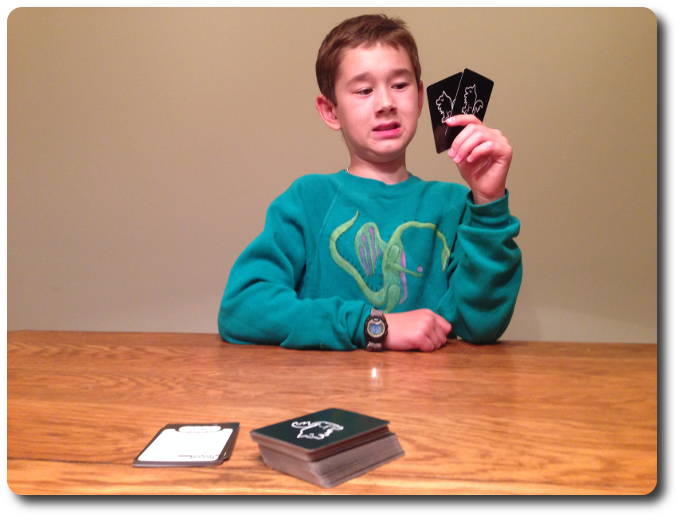 The Parent Geeks were the same. All new players started the game with optimistic enthusiasm that quickly shifted to dogged determination to win and finally to acceptance that they had wasted their time playing the game. According to one Parent Geek, “This game has a few funny moment, but not enough to make up for the rest of the game. There’s a card that was played that required me to slap a player, for goodness sake. This is not a good game.” Another Parent Geek said, “The challenges are outrageous and everything is luck based. I wouldn’t say this game is bad so much as unnecessary. There’s enough random crap going on in my life as there is.” The Parent Geeks were hoping for a funny party game. Instead, they found a game that ruined the party. All the Parent Geeks voted to reject the game.

The Game Geeks started playing the game and then wanted me to throw it in the trash before the first game was done. According to one very upset Gamer Geek, “This game is shit, Cyrus. It’s random, idiotic, and completely lacks any semblance of substance. Don’t throw this game away. Keep it as a reminder of what a bad game really is.” Which got the Gamer Geeks talking about why this game even existed. Some thought it was meant as a joke. Some thought it was meant to be a drinking game. Many thought the game was simply a mistake. As one Gamer Geek put it, “Any game that gives the players the middle finger, despite how hard they try to play along with the game, is not a game worth playing.” All the Gamer Geeks voted to reject Rough.

Wow. This game really stirred up some emotions, but to be fair the game box does clearly state that no one should play this game. It also says that the game designers take no responsibility, which is a good thing, because I was starting to see players gather in mobs and looking for pitchforks.

There is a thin line between hilarity and absurdity. Hilarity you can tolerate because it makes you laugh and enjoy yourself. Absurdity tests your patience and can make one angry. Rough crossed this line many times during our game playing sessions, delighting one moment and then infuriating the next. This up-and-down emotional ride made most of our players tired and aggravated. Heck, they were downright grumpy.

But is this game really as bad as the players make it sound? Maybe. Remember that all of this is subjective and one person’s “best game in the world” is another person’s trash. Admittedly, it doesn’t bode well that all our groups thought that Rough was a game worth forgetting, but I have to believe that it’s worthwhile for someone. I wonder if this game would be well received during a convention where a game is in order, but no one really wants to play it. Or, for non-gamers who want to play a game with alcohol involved. Both strike me as likely candidates. The point is, there is a game here, but it’s not one that I think wants to challenge you mentally. It just wants to be the center of attention.

As for me, Rough is not my kind of game. I don’t care for games that don’t give players much of a choice or just kick a player out of the game because they were unlucky to draw a card or could not complete a simple task. I like the kind of games that challenge players to think outside the box, outfox opponents, and use strategy and tactics to achieve short-term and long-term goals. Playing Rough felt like I was being bullied and ignored. The game doesn’t care about the players and laughs at them when they get angry. Which, in some ways, I can respect. This is just a game and it reminds us not to take the game or ourselves too seriously.

But seriously. This game…

You can only take being kicked in the proverbial teeth so many times until you start to ponder the very real possibility that there are about a billion better things you can do with your time. Rough failed to please or entertain, but it did challenge everyone to keep their cool. If this sounds like a game for you, I encourage you to seek out and play Rough: The Card Game to see if you are tough enough to enjoy it.