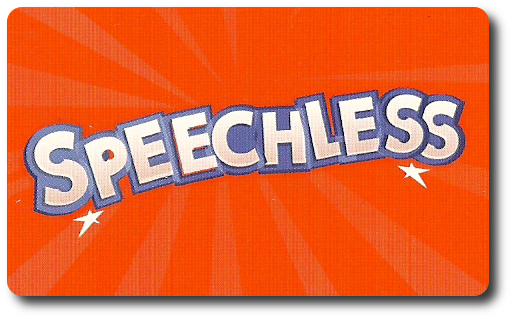 They say that silence is golden, but what good is gold if you can’t shout for joy? In this game, players will be challenged to keep silent when acting out words and guessing them. Not as easy as it sounds, since hilarity ensues at every moment. Get ready to be creative and disciplined as you try to guess words and act them out without making a single sound.

Speechless, designed by Mike Elliott and published by Arcane Wonders, is comprised of 8 marker boards, 8 dry erase markers, 1 Scoreboard, 270 Word cards, and 1 90-second sand timer. The boxes tray, in addition to holding all the game bits when in storage, acts as a card holder. The markers are meant to be used on the marker boards and the Scoreboard.

To set up the game, first give each player 1 marker board and 1 dry erase marker. Place any unused boards and markers back in the game box.

Third, leave the cards in the game box and set the game box to one side, but within easy reach of the players.

Each player takes a turn being the “Presenter”. The Presenter will act out a total of 6 words without making a sound. No talking from either the Presenter or the other players is permitted. The Presenter may point to objects in the room and even trace drawings in the air. However, the Presenter may not spell out words making letters, use sign language, or mouth the words.

The other players can make motions to indicate that they understand or are confused, but are not allowed to make any sounds.

While the Presenter is silently acting out the words, the other players are silently attempting to guess the word. If the player thinks they know the word, they write it down.

Scoring and Winning the Game

The round ends after 90 seconds have lapsed. It’s now time to determine the scores earned during the round.

Points are recorded and a new round begins with a new Presenter. After all the players have had an opportunity to be the Presenter, the final score is determined. The player with the most points wins the game.

To learn more about Speechless, visit the game’s web page.

The Child Geeks loved the game, laughing most of the time and struggling to keep quiet all the time. According to one Child Geek, “I like this better than Charades because you have a lot more ways to earn points.” Another Child Geek said, “The game is a lot of fun and makes you use your imagination.” We tweaked the game a bit and had the Child Geeks complete 1 “easy” and 2 “medium” difficulty cards. We found that most of the younger Child Geeks didn’t know what the red card words were or how to even attempt to act them out. The older Child Geeks had no problem with the “hard” difficulty, however, and played the game as it was written in the rules without issue. The only real issue the Child Geeks had during the game was forgetting what they could and could not do to give hints. For example, spelling out the word in the air that players needed to guess. That’s a major “no-no”. Still, the little set backs did nothing to upset the game and all the Child Geeks voted to approve Speechless.

The Gamer Geeks were not impressed. According to one Gamer Geek, “This is Charades. That’s all this is. It’s not even an original game.” Another Gamer Geek said, “It’s not a bad game. It’s just a very unoriginal game.” To be fair, none of the Gamer Geeks found any fault with the game play. It was the game itself that the Gamer Geeks had a problem with. Having not found anything unique or interesting with Speechless, they all voted to reject it. But there was one Gamer Geek who voted to approve the game. In his own words, “This is a solid game. It challenges players to be creative and think critically. It shouldn’t matter if this game is a lot like other games. We should vote on the game based on its own value. And for that reason, I vote to approve it.”

The best way to describe Speechless is telling people it’s a Charades variant. Really, the game is pretty much Charades with a few more rules about how the words can be acted out, and that’s about it. Turns out that’s enough for both the Child Geeks and the Parent Geeks. Not so much for the Gamer Geeks who wanted the game to be much more than a reproduced version of an older game. As for me, I found Speechless to be fun, but not very enticing. It’s not a game I would seek out, but nor would I turn a game down. Just like real Charades, Speechless is best played with a group of people who are in the mood to play a party game. Lacking that, there is really no reason to bring out Speechless to the table. Still, when it does make an appearance, it’s fun to play. Do give it a try if you are a fan of party games.