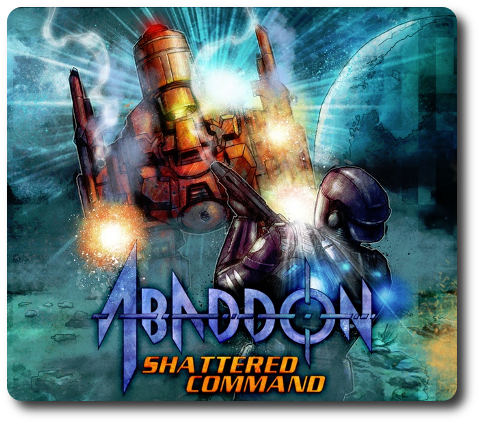 The land was once green and fertile. Now it’s lifeless and pockmarked with craters. It’s in this desolate landscape that men and women fight for survival. Some hunt on foot looking for their enemy, while others pilot giant mechanized battle mechs called Links. From the Command Bunkers, the word goes out that the enemy is approaching. Without hesitation, the soldiers once again charge into war.

Abaddon: Shattered Command, designed by Richard Borg and to be published by Toy Vault, Inc., will reportedly be comprised of 2 Command Bunker tiles, 20 Command Bunker Program cards, 6 Program Enhancement markers, 2 Five-Point bonus round counters, 32 Equipment Upgrade markers, 24 Power Crystals, 16 Terrain tiles, 2 Player aids, and 4 new Lock-On Relay pieces. As this is a review of a prepublished game, I cannot comment on the game component quality. Abaddon: Shattered Command is a game expansion and requires the core game, Abaddon, in order to be played.

What You Get In the Expansion

The expansion includes a lot of new stuff to enhance the game. The more interesting components are summarized here.

The two new steps are as follows.

In addition, the several dice have changed. The Activation die is rolled during different steps, the Command die can now be used to draw 2 Weapon cards, and Weapon die now allow players to draw 1 Weapon card or draw 1 Command Bunker Program card.

The Command Bunker and Programs

The Command Bunker is a powerful new addition to the battleground. The men and women encased in the bunker help direct front line combat orders and missions. Bunkers are placed like terrain and miniatures when the game board is being set up. Bunkers may not move, but are far from easy targets. They attack with the same power as a Heavy Link.

But a bunker’s real strength is their Program cards. These cards describe an action and when the action must be resolved. Examples of Program cards include the “Broadcast Virus” that reduces the health of a targeted unit by 2, the “Initiative Exchange” that allows a player to change their round order value, and “Super Doom Boost” that allows the player to roll 2 Activation die when using “Doomsday Bolt”.

The new point system allows players to build a custom ground forces to take to the battleground. How it works is pretty simple. The players agree upon the total number of points they can use to build their small army. Then they buy the individual units that they want. Each unit, depending on what it is, costs a different number of points. For example, the Heavy Link costs 27 points, but the weaker Infantry Squad costs only 11 points. Players can also buy Command Bunkers, equipment upgrades, and starting weapons.

With the expansion comes new weapons. The upgrades make the lethal Links all the more dangerous by equipping them with powerful weapons of semi-mass destruction. “Dual Auto Cannons”, “Jump Rockets”, and the ultra sneaky “Stealth Beacon” that hides you from your enemies are just a few of the new “toys” to be played with.

A new terrain type is provided in the expansion. The Terrain can now be moved through, but stop moving units when they first enter.

Several new scenarios are included with the expansion, giving players even more ways to enjoy the game.

The Parent Geeks found the expansion to be more functional than attractive. According to one Parent Geek, “What this expansion adds feels like it is under the covers. Well, you know, not really, but the new additions slip right in with the game and don’t make a huge visual impact.” This was seen as a very good thing by many of the Parent Geeks. According to one such player, “Any game expansion that fits seamlessly into the core is worth your money. Expansions should add to the game, not subtract or compete with it.” Every aspect of the expansion was enjoyed by the Parent Geeks, but the most popular was the Program cards. As one Parent Geek put it, “I think these cards are real game changers. They give me a lot more to do and to think about without adding a lot of additional weight to the game.” When all the Links were safely parked, the Parent Geeks voted to approve the expansion.

Like most expansions, Abaddon: Shattered Command fulfills its obligation to add to the game. What is not fully apparent is if the expansion took the game in the right direction. Again and again I heard our players stating that they wished the expansion brought in new units. This leads me to believe that the rules of the game are solid and every player is happy with what they have. What they are missing is more miniatures and options. The expansion covers the options to a “T”, but makes no attempt to address the lack of additional miniatures. One could suggest that the Command Bunker is a new miniature, but I would argue it’s more of a special Terrain piece, rather than a fully functional unit.

Overall, I am pleased with the expansion. It added new options to game play and extends the game for many more hours. It’s not a perfect expansion by any means, but what you get is not fluff. Abaddon is a still a light tactical wargame. Perfect for beginners or casual players. Fans of Abaddon will warmly welcome and enjoy the expansion. Those who have always wanted Abaddon to be more than what it is will be left in the cold.