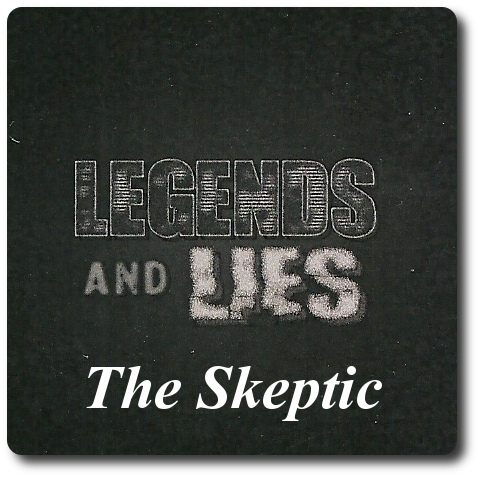 When so-called “experts” present something as fact, most people blindly believe what they are told. But not you. You have always been skeptical of anyone who tells you to believe anything with little evidence to back up their claims. Some say that being too big a skeptic could lead to unhealthy suspicion and paranoia, but that’s crazy talk. It’s always better to be on guard. You’ll be damned if the giant alien hedgehogs from Beta Alpha Prime take over the world on your watch!

Legends and Lies: The Skeptic, designed by Diane Sauer and published by Shoot Again Games, is comprised of 6 “Giant Squid” Expedition cards, 2 “Science Weighs In” Expedition cards, 1 “Coelacanth Captured” Expedition card, 1 “Sucker Marks” Proof card, 2 “Government Cover Up” Hoax cards, and 1 Skeptic meeple. All the cards are used in the same way as the those found in the base game. All artwork and card quality are the same as the base game, as well. Of particular note is the Skeptic meeple, which represents not a skeptical person, but a three-legged green alien who might or might not be a skeptic. 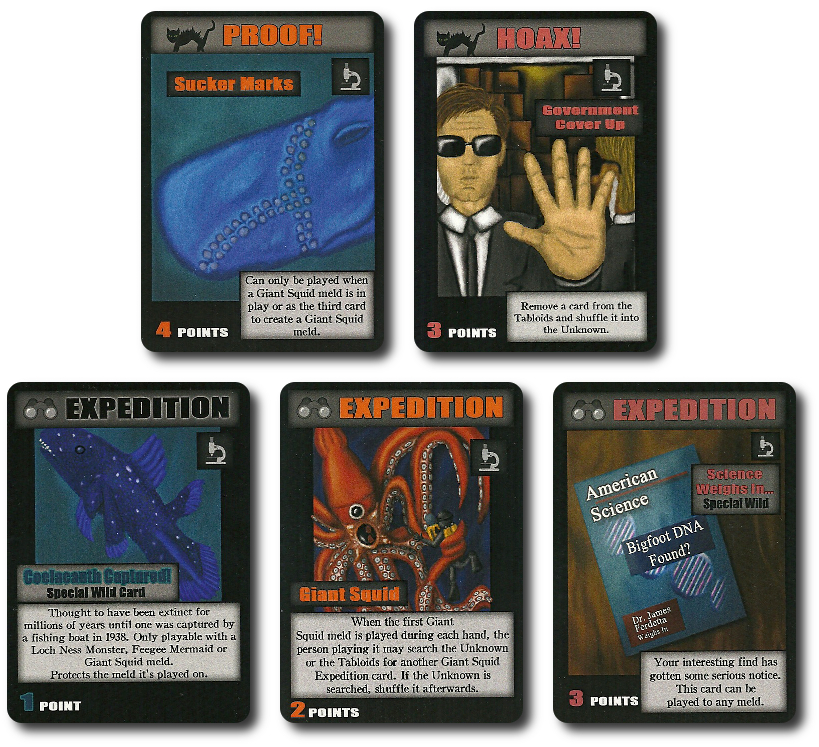 The new cards in the game

A Tickle of Doubt

Legends and Lies: The Skeptic is for 3 or 4 players and replaces the base game’s cooperative team game for 4 players. The Skeptic game expansion requires a few tweaks to the base game’s set up. To begin with, the “Expert Opinion” wild cards are removed from the game entirely. All the remaining cards in the base game are shuffled together with The Skeptic expansion cards. The only other change is the Skeptic three-legged alien meeple which is passed around the table and belongs to whomever is the current dealer. 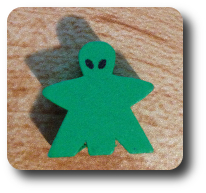 As the game progresses, each player will have an opportunity to be the Skeptic twice in a 3-player game or once in a 4-player game. Any player who is not the Skeptic is referred to as a Cryptozoologists. Cyrptozoologist players play the game as normal. The Skeptic plays the game a bit differently as summarized here.

The Skeptic is not allowed to create new melds (a set of identical cards). Thematically speaking, it makes no sense for the Skeptic to provide evidence to claims they are attempting to debunk. Instead, the Skeptic plays off of other player’s cards as normal, but turns their played cards sideways. The Skeptic is still limited to the 1 Anomaly card per turn rule. Cards played in this position will count against the cards of that type, seriously impacting the points earned by the Cryptozoologists.

At the end of the hand, the Skeptic picks up all the cards in the “Tabloids” and separates them by color. As with the base game, remove 1 card from the largest meld for every 1 matching card in the “Tabloids”. The cards played by the Skeptic are ignored. Removed cards are placed next to the Skeptic. The process is repeated, but the Skeptic’s cards are now used. When completed, if there are any remaining cards in play that have a combined (across all the players) total point value of 10 or more, the points for that creature are doubled. Cryptozoologists now count their points as normal and record the points earned as their score for the hand.

The Skeptic scores points for any pink lettered cards, regardless of who played them. Thematically speaking, these wild cards are just to – well – wild and do not serve to strengthen the argument for or against the creature’s existence. The Skeptic can easily flip the “facts” suggested by these cards as counter arguments.

The Search for Truth Continues

When the hand ends, the game continues by taking all the cards and passing them to the player located on the Skeptic’s left. This player is the new dealer and the new Skeptic. Points are recorded at the end of every hand and added to the points earned during previous hands. When the game ends, the player who scored the most points wins. No room for skeptics here – the numbers don’t lie. Unless, of course, you added the numbers wrong.

To learn more about Legends and Lies: The Skeptic, visit the game expansion’s web page.

After playing all our games with the expansion, the endorsement levels didn’t change, but those who were skeptical of the base game were liking it more. The Child Geeks and the Parent Geeks both thought the game expansion made the game much more interesting and fun. They especially liked how different the Skeptic played, which gave the players an opportunity to score points in a new way. The Gamer Geeks who already enjoyed Legends and Lies thought the game expansion was exactly what the game was missing and praised it as a “must have” for anyone who had the base game. Those Gamer Geeks who didn’t care for the game were not persuaded to change their minds with the expansion, but they did think the expansion took the game in a better direction.

This is an oddball game expansion. To being with, the cards that are added are just like the cards in the base game. Which is to say, more of the same. By adding them to the base game, you give the players more cards to work with and to use for melds. Just adding more of the same is not an expansion in my book, but the so-called expansion comes with new rules. This is where The Skeptic takes a sharp detour from the base game in a new and interesting direction. Then it gets odd again by forcing me to take away cards permanently before I add cards. Most likely done for balancing reasons, but it felt unnecessary.

Once we get past the oddness of how the expansion is introduced and included in the game, you start to see its value. It’s not often that I say this, but this expansion should have been part of the base game from the very start. And by “part of” I mean it should have been in the base game and game play at the very start. Having players switch roles is not only a wonderful way to keep the game play interesting, but it also introduces an enjoyable semi-cooperative element that forces all the Cryptozoologist to work together to ensure that they have enough evidence to beat the Skeptic. The end result was the Cryptozoologists playing off each other in a mad frenzy to keep the Skeptic at bay, while at the same time attempting to be the player to find the most evidence. The Skeptic, in turn, cancel cards and can target larger melds to ensure big points are not earned.

This expansion adds tactics and strategy in places where there were none to be found. New ways of scoring based on player role and the new semi-cooperative game play that is used by the Cryptozoologists against the Skeptic makes each hand nail-biting. This is especially true when going through the “Tabloids” and the Skeptic’s played cards when determining the score. When the games are over, I think you’ll find the game expansion improves the base game to a point where you’ll always want to use it. Do play Legends and Lies with The Skeptic game expansion as soon as the opportunity presents itself.