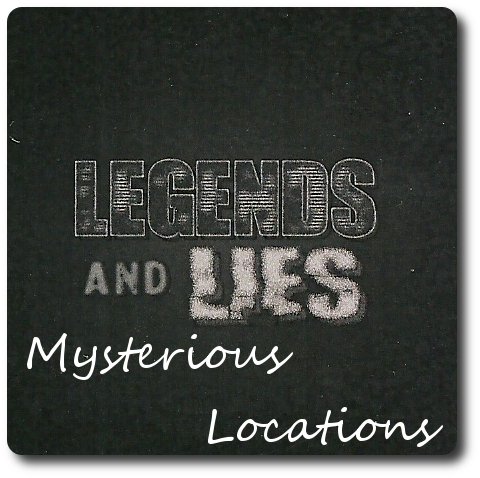 Many believe there are locations on our planet that are unique. Some are the source of spiritual and supernatural springs that individuals can tap into. Other locations are doorways to different dimensions and to places best left unspoken. These strange places are found in some of the most remote locations of the world and in the backyards of modern-day suburbia. For those who search for the truth and believe that there is more to our reality than what we can simply see, these locations are frequently visited.

Legends and Lies: Mysterious Locations, designed by Diane Sauer and published by Shoot Again Games, is comprised of 2 Phenomenon cards, 6 Expedition cards, 17 Mysterious Location cards, 4 rock pieces (which are actually small pieces of rock), and 8 “Jodie” meeples. All the artwork and the card quality matches the base game. It must be noted that the “Jodie” meeples look like little pigs. If you are familiar with The Amityville Horror, you know why.

Places of Power and Danger

The primary focus of this game expansion is the Mysterious Location cards. The expansion’s Phenomenon and Expedition cards are shuffled in with the rest of the cards. The instructions provided in the game expansion describe the correct ratio of cards if playing with promotional cards and other expansions, such as Legends and Lies: The Skeptic. There’s not much more to say about these cards as they are used in the exact same way as the other cards that share the same name.

This Mysterious Location card features the infamous Amityville house. Fans of the movie and the book will remember that “Jodie” is the name of the imaginary friend the little girl starts talking and playing with. It’s later revealed that “Jodie” is a demonic pig-like creature with glowing eyes. This expansion includes “Jodie” meeples that are placed on the “Amityville, NY” Mysterious Location card each time a card is played to the “Tabloids”. The demonic pig-like meeples can later be removed to draw any card from the “Tabloids” instead of drawing a card from the Unknown draw deck. Or, if the player prefers, they can keep the “Jodie” meeples on their Mysterious Location card until the end of the round and receive 1 point for every “Jodie” meeple they remove. 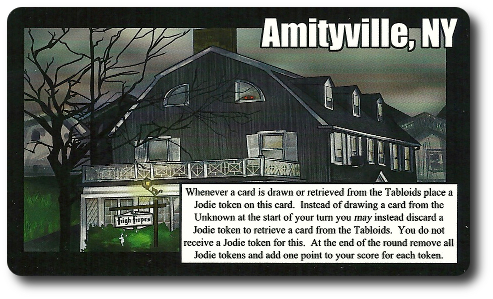 And just because it’s worth watching, here’s the scene from the 1979 movie, The Amityville Horror, where we get to see “Jodie”. It’s a bit of a jump scare, but nothing horrific. If you look very closely at the “Amityville, NY” Mysterious Location card, you can see “Jodie” looking at you from the upstairs window…

Uluru, which is also known as Ayers Rock, is a very large sandstone rock formation in the middle of nowhere Australia. The nearest population is over 200 miles away, making this rock a bit of a trip. Yet people flock to it, believing it’s a source of great spiritual and supernatural power. Personally, I think they are all suffering sunstroke, but that’s a debate for another day. Within the game, the “Uluru” Mysterious Location card gives the player 1 rock piece per player in the game that can be placed on any card in play after discarding a card to the “Tabloids”. This card with a rock on it causes their owner to lose 1 point at the end of the round. After all the rock pieces are removed from the Mysterious Location card, they can be moved to other cards. 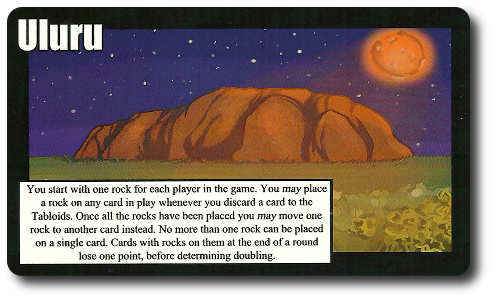 Devils Tower is truly a unique location, although it isn’t very mysterious. Situated in the rolling hills of northeast Wyoming, this towering rock structure immediately demands the attention of anyone who’s looking at. The location is sacred to the many Native Americans and it’s easy to understand why. It’s awe-inspiring. I’ve been there several times myself and I’m always lost in wonder at the beauty of the surrounding area and the majesty of the tower. Within the game, the “Devils’ Tower” Mysterious Location card provides the player with the ability to drawn 2 cards from the Unknown draw deck and select the one they want. That gives the player a pretty good advantage, but still requires the player to take a chance by drawing random cards. 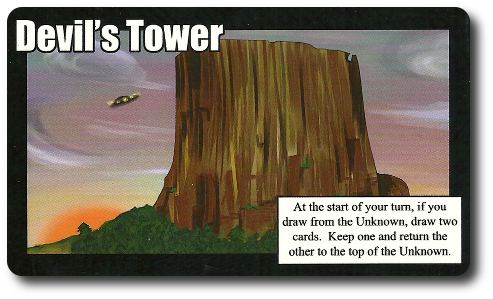 On a sidenote, this Mysterious Location card is both correctly and incorrectly named. The location and park the card is representing is not spelled with an apostrophe. According to the U.S. National Park Service, “When the proclamation establishing Devils Tower was published, the apostrophe was unintentionally dropped from “Devil’s”—and this clerical error was never officially corrected.”

Additional Places Around the World

In my opinion, game expansions should “expand” the game play by adding a new layer of complexity, decision making, and tactics. Legends and Lies: Mysterious Locations adds tactical choices, but not complexity. Which, as it turns out, is not a bad thing. This makes the game expansion very easy to use and add to games, but I do not recommend adding this game expansion right away. The Mysterious Locations are something of an unnecessary addition to the game play that do not change it significantly enough to shake its foundation, but their use with new players will be an unnecessary distraction. As such, I recommend this expansion only after the base game has been learned, played, and enjoyed.

No matter how a player felt about the Mysterious Location cards, they were always the subject of conversation. A number of times the games were stopped while players looked up their Mysterious Locations to learn more about it. There were frequent debates about the legends and lore that surrounded them, but the “Cyberspace” Mysterious Location was always seen as a joke. Which it might have been, but who among us can deny that there are very strange things on the interweb. Many of which are best left unseen.

This is not a bad game expansion, but it isn’t breaking new ground or taking the game to new heights. It was welcomed by those who were already enjoying the game, but was found to be of little interest to those players who were expecting the game expansion to add more depth. New tactical choices are available making the Mysterious Location cards a fun addition to the game, but none of the choices provided give a player a significant advantage. If you are a fan of the base game, do site down and take a trip to Legends and Lies: Mysterious Locations.