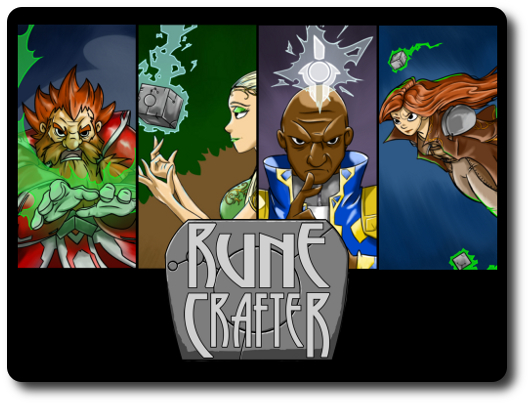 The art of crafting magical Runestones has been passed down in secret for generations. Each new student later becomes the teacher, showing the next generation how to craft the mystic runes. But the natural order of things has been disturbed. New powerful Runestones have been created and the balance of power has shifted. Now the Rune Crafters battle each other to control this new power. Some do so for prestige, while others are simply trying to survive. 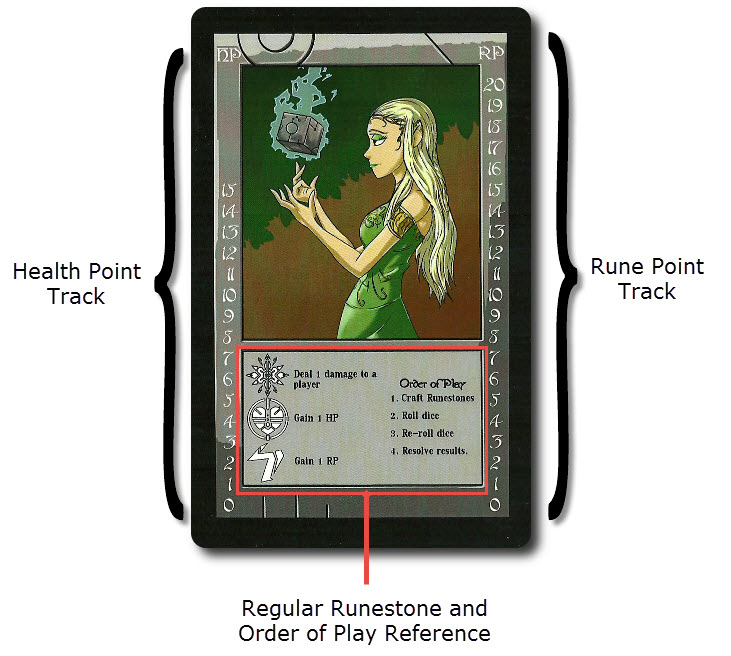 Third, shuffle the Event deck and place it face-down to one side of the game playing area, making sure to leave room for a discard pile. This is the Event draw deck for the duration of the game.

That’s it for game set up. Determine who should go fist and pass the first player the 5 Regular Runestone dice.

Rune Crafter is played in rounds and turns with no set number of rounds per game. A player’s turn is broken down into several steps which are summarized here.

If this is the first round of the game, skip this step. During the second and all later rounds, a new Event card is drawn, read out lout, and remains active for the duration of the round. In game terms, an Event card alters what the players can and cannot do during the round. Negative and positive effects can be drawn which can tip the balance of power in and out of a player’s favor. Thematically, the events are portraying the results of tampering with magical forces the player’s shouldn’t be messing with. 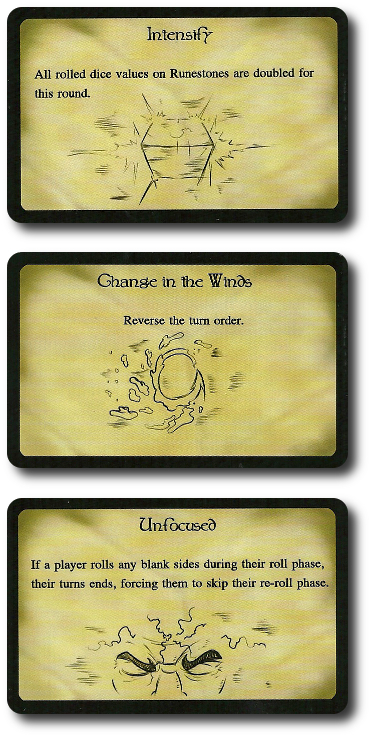 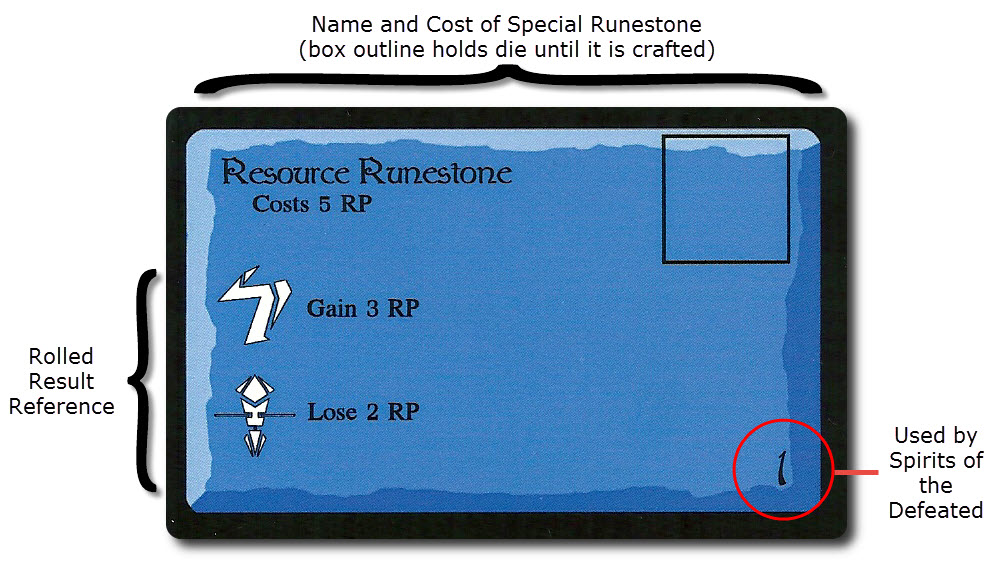 Unlike the Special Runestones, the Regular Runestones are always beneficial to the player who rolls them, but they can also fail to provide any benefit whatsoever. The possible effects of a Regular Runestone are listed on the Character Reference card and are summarized here.

A player can never have any more than 15 Health Points or 20 Rune Points in the game.

After all the dice have been resolved, the player keeps any Special Runestones dice they might have and passes the 5 Regular Runestone dice to the next player in turn order sequence. This completes the player’s turn.

Character Demise and Winning the Game

When a character’s Health Points are reduced to zero or less, the have fallen. The player with the fallen character returns any Special Runestone dice they have in their possession. Then the player flips their Character Reference card over and becomes a Spirit of the Defeated, a supernatural entity made of the same magical essence as the Runestones. 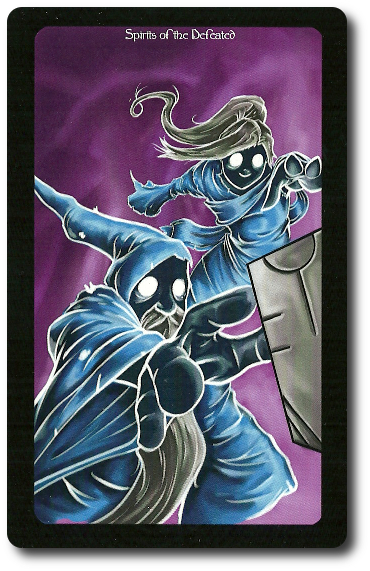 The game continues with players taking turns and starting new rounds. When only one player remains that is not a Spirit of the Defeated, the game comes to an end and they are declared the winner.

To learn more about Rune Crafter, visit the game’s web page on The Game Crafter.

The Child Geeks loved rolling dice and taking out their opponents. As one Child Geek said, “The best part of this game is that I feel like I’m messing with powerful and dangerous magic. It feels great when you do damage to your opponents instead of yourself!” The chance of failure and suffering self-inflicted damage made every roll for the Child Geeks feel tense and ended in cheers, groans, or shrugs of indifference when the dice were resolved. One Child Geek said, “It’s hard sometimes to determine what you should focus on. Most of the time, I just keep my life up and get Rune Points when I can.” With the largest number of players possible (6 in total) the game dragged, but became faster as more and more players became Spirits of the Departed. One such Spirit said, “When you are out of the game, it kind of stinks, but it’s not that bad. You can really mess with other players!” All the Child Geeks enjoyed their time with Rune Crafter and voted to approve it. 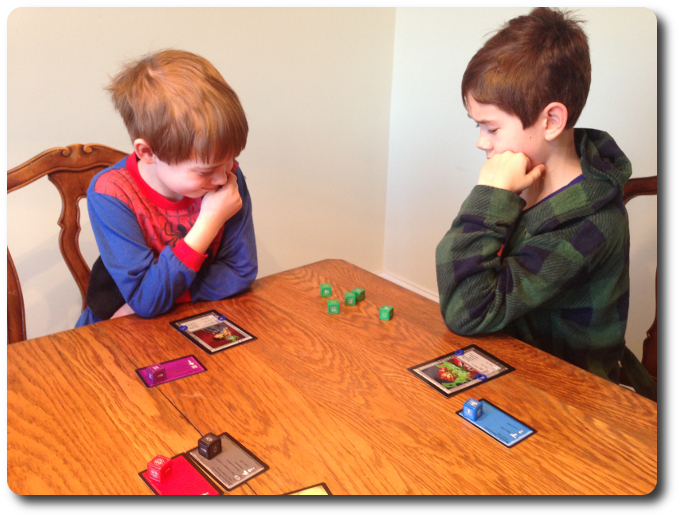 My oldest debates the pros and cons of re-rolling, while his younger brother provides less than helpful advice

The Parent Geeks most certainly enjoyed playing Rune Crafter with their family and mixed groups of Child and Parent Geeks, but didn’t get all that excited when they played the game with just their peers. One Parent Geek said, “This is an easy game to learn and can be fast to play, depending on how the dice roll, but it just feels way too repetitive. The game falls a bit flat for me.” Another Parent Geek said, “This is a great game for my kids and one I enjoy playing with them, but I want something with more depth when I play with adults.” The Parent Geeks enjoyed the risk versus reward critical thinking in the game, but never felt that the choices were all that complex. Perfect for younger minds learning games, but for the adults, the game’s level of challenge came down to tolerating luck and randomness. The Parent Geeks were undecided with their vote, approving the game for their families, but not particularly caring for it with their friends.

The Gamer Geeks did not care for this game. As one Gamer Geek said, “The only choice you have in this game is to participate or not. I chose poorly.” Another Gamer Geek said, “Games like this are great for people who just want to play a game by going through the motions without thinking about it. Makes for an easy game to play in a social situation, but it’s not much of a game.” All the Gamer Geeks liked the idea of crafting new Runestones, but didn’t like how easy they were to take away. As one Gamer Geek said in frustration, “I mean, why bother? They are too risky and take too much time to focus on, only to be lost or targeted.” The Gamer Geeks also didn’t care for how hollow the game felt. One fed up Gamer Geek said, “The game’s theme has been done, the risk taking is old news, and the choices are this or that without really making much of a difference. This is not a good game.” As for the Spirits of the Defeated, the Gamer Geeks liked that their single purpose was to make the game end faster. When it came time to vote, the Gamer Geeks gave Rune Crafter the boot, agreeing to never play it again.

I am always having the same philosophical discussion with my play groups. We debate ad nauseam what makes something a “good” or a “bad” game. I have convinced pretty much everyone that the right answer is the one the individual decides, but their answer is highly subjective. It’s like me saying burgers are the best thing in the world to a vegetarian. My statement is true as it pertains to my temperament, but is way off the mark for the vegetarian who now thinks I’m an animal murderer. When it comes to games (and burgers), whose statements are more accurate? Who’s right and who’s wrong?

The answer is based on your personal point-of-view. Which means there is no answer except the one you decide to believe. Which might be your own or another person’s opinion you adopt as your own. Deep, eh?

Rune Crafter is a dice game, plain and simple. Elements of luck, risk taking, and random outcomes are at its base, but players can also make choices. For example, which opponent to attack and which Special Runestone dice to craft. Depending on a player’s personal preference, that’s a whole lot of goodness or bowl full of slop. Since my job is to just observe and report, I do all I can to keep my mouth shut so as not to influence the end results. I’m afraid I still do a lot of eye-rolling, however, whenever I hear a player declare a game’s value using a tone of superiority when all they are doing is expressing their personal opinion. Even more so when they then try to argue and defend their opinion as if it’s a scientific fact backed by thousands of studies and unquestionable data.

So here’s mine, which is admittedly highly hypocritical, but is based completely on my own thoughts.

Personally, I think Rune Crafter is a great game for Child Geeks and a fun one for me to play with them. I’m not big on games like Rune Crafter in general, but I’ll be damned if I miss a chance to play a game with my kids. Sometimes that means I get to enjoy a game that is not one I would normally want to play and sometimes that means I do. While Rune Crafter is not a game I would reach for when playing with Gamer Geeks, it certainly does its job and does it well when I’m playing with Parent and Child Geeks at the same table. If you are looking for a game where taking risk could lead to a reward or a dangerous dice explosions, do sit down and play a game of Rune Crafter.