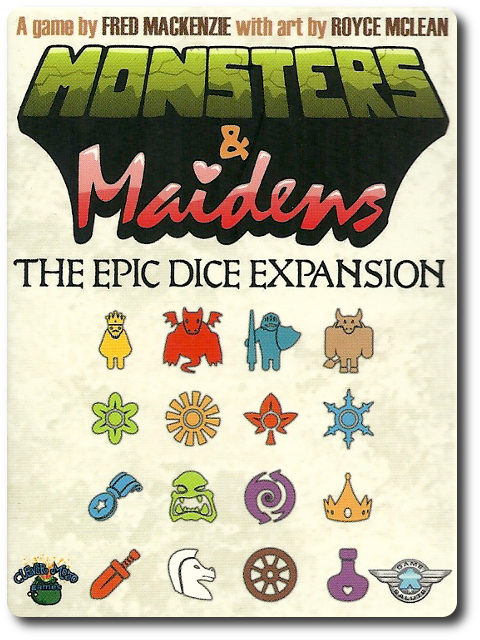 Rescuing maidens has never been an easy job, but it does have its advantages. For one thing, a hero who rescues maidens has guaranteed job security. For some reason, maidens are always being captured and in need of rescue. To the untrained eye, it all seems rather straightforward, but there is so much more to it. For example, what tools should you bring? What is the weather going to be like? Are there any dragons or kings nearby? All important questions that need answers, because the answer could mean the difference between success or epic failure.

Monsters and Maidens: Epic Dice, designed by Fred MacKenzie and published by Game Salute, is comprised of 4 custom six-sided dice and 4 Rule cards. The dice are black (a different color than the base game’s dice) and solid. The accompanying Rule cards are as durable as your standard playing card and describe how each die is used, as well as what the die symbols mean. The entire expansion can easily fit in the base game box with room to spare.

A Die For All Occasions

Monsters and Maidens: Epic Dice introduces 4 new dice to be used in the game. Players can use 1, 2, 3, or all 4 of the dice if they really want to. Each of the 4 dice and their uses are summarized here.

This die is added to the player’s first roll and in every re-roll. As the name of the die suggests, equipment is now added to the game. Not all tools are useful.

These are some seriously dumb Maidens….

Turns out that capturing Maidens and fighting Monsters is a year-round activity the entire family can enjoy. The Season die is rolled at the start of each round and influences every players’ turn during the round.

Rescuing Maidens and fighting Monsters is not the only extracurricular activity to be had in the kingdom. There are adventures to be had! All of which involve Maidens, which should come as no surprise. Players roll the Adventure die during their first roll on every turn, re-rolling if blank. The result of the roll only influences the player’s first turn. Not any of the re-rolls thereafter, unless the result is a Minotaur or a Knight. In which case, the Adventure die is re-rolled with the other dice, too.

The Fate die represents the ever-blowing winds of change and destiny. Sometimes that wind is a gentle breeze and other times it is as destructive as a tornado. Caution should be used before using the Fate die, as it will shift the balance and increase the already high level of randomness in the game.

Each of the dice can be used individually or in any combination. If using more than 1 die at a time during the game, there are additional rules that must be followed when resolving rolled results.

Really, it’s easy to memorize. Just remember the word SFMMHTA and you’re all set (the “M’s” are silent).

This game expansion is the perfect example of making a really simple game into something that is now needlessly complicated. Monsters and Maidens was already random enough before the Epic Die  expansion added even more randomness. For some of our groups, that wasn’t a big issue. For others, it totally killed the game or was just one more nail in the coffin.

I do not recommend using all the Epic dice when playing. It adds more downtime for the players and can create confusion when attempting to resolve the dice. It can also make a player’s turn into a meaningless attempt to gain points, as dice are canceled, shifted, and removed from play. You should also expect your games to be much longer when using all the dice, making Monsters and Maidens into an epic time suck.

Individually, the Epic dice work very well. They add just enough variety to make re-rolls into a real gamble, making the players think of the different ways thing could or could not go their way. I really liked this and so did all our players. One Child Geek said, “The Season die is the best. It changes how each round is played and makes the game feel different.” A Parent Geek said, “By far, the best die is the Adventure die. I hate the Dragon, love the King, and enjoy watching the battle with Knights and Minotaurs.” A Gamer Geek said, “With the expansion, this totally forgettable game has provided some very memorable moments.”

The least favorite of all the Epic dice and the one that is hardly ever used is the Fate die. All our players felt it unnecessarily messed with the game, inserting random events that neither improved the game or helped make for a better game playing experience.

The final verdict? The Monsters and Maidens: Epic Dice game expansion was an absolute winner with the Child Geeks, a welcomed addition with the Parent Geeks, and seen as too little too late by the Gamer Geeks. According to one Gamer Geek, “This should have been included with the game right from the start to set it apart and give players a challenge. Now it feels like a money grab and a desperate attempt to lift the game out of its soporific tediousness.” Possibly, but maybe not. The value of any expansion is in the eye of the beholder.