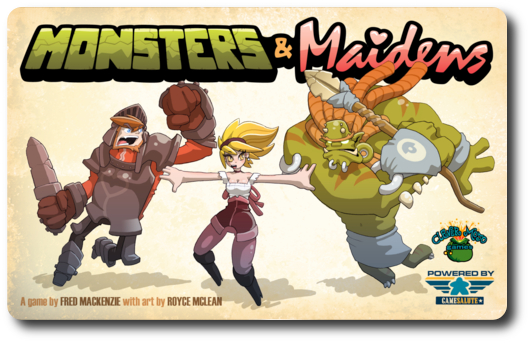 Maidens are under contractual agreement to be captured by monsters no less than 5 times per year. This coincides with the monster’s labor union bylaws (subsection “F”) that guarantees each monster no fewer than 10 maiden abductions every 2 years, give or take a maiden. Heroes, however, have no such contractual agreement and have long since fought the idea of unionization. This, as you might have guessed, causes a bit of friction. The heroes, being free agents, seldom care to adhere to the standardization set many years ago. Maidens don’t seem to mind much, but the monsters are getting pretty fed up.

Monsters and Maidens, designed by Fred MacKenzie and published by Game Salute, is comprised of 9 custom six-sided dice, 1 Monster card, 1 Hero card, 1 Maiden card, 1 Lady Hero card, and 3 Epic Fail cards. The dice are made of solid plastic with engraved images. The cards are as durable as your standard playing card with excellent illustrations by artist Royce Mclean. Not included with the game, but necessary to play, is a pen or pencil and a piece of paper to keep track of players’ scores.

To set up the game, first  determine who will go first.

Second, give the first player the Monster and Hero card. These are set in front of the player and will help keep track of dice to be scored. The players can use the Hero or the Lady Hero card during the game. Whichever card is not used should be returned to the game box. It’s nice to see that heroes are represented by both men and woman, but the Monster still remains male. Which is pretty sexist and unrealistic. I know some terrible women, for example, but I digress. 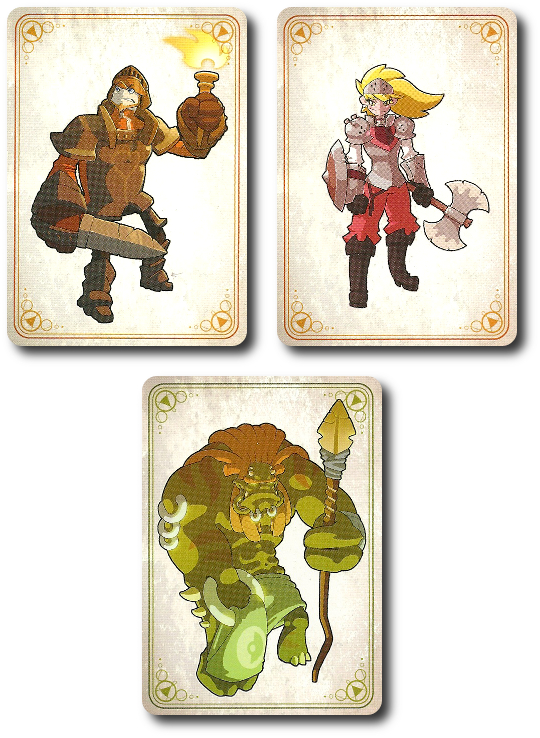 That’s it for game set up. Time to rescue the maidens…again.

To the best of my knowledge, the Maiden card is not used. Feel free to create a game variant using the card and share it with friends.

Dice Are for Heroes

Monsters and Maidens is played in rounds and turns with no set number of rounds per game. On a player’s turn, they will take all 9 dice, the Monster, and the Hero card. Optionally, if the playing area is small enough, you can place the Hero and Monster card in the middle of the playing area where all the players can easily reach it. A player’s turn is summarized here. 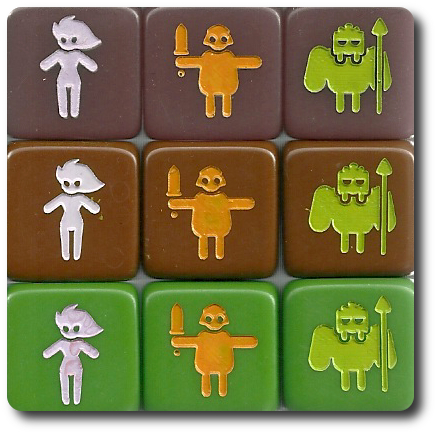 From left to right: Maiden, Hero, and Monster

Any Maiden symbols rolled are immediately “rescued” regardless of the dice color. Place the dice with the Maiden symbol on the Hero card. These dice are “locked” and can never be re-rolled, but they can be lost.

Now the Heroes and Monsters battle it out. For every 1 Hero symbol rolled, 1 Monster symbol is canceled. Both dice should be set aside, having slaughtered each other in glorious battle.

When the dust settles (which is a fancy way of me saying you have removed all the matching Hero and Monster dice), the player might have dice left. These dice will either be all Heroes or all Monsters.

If at any point there are no Maidens to move, the player does nothing. This is not a penalty. There simply isn’t anything to move. Likewise, if the player is unable to move as many Maidens as Hero or Monster symbols call for, the player simply moves what they can.  For example, if the player rolled 3 Heroes, but only 2 Maidens are available, the player would move the 2 Maidens with the 3rd Hero being ignored.

The player must now make a choice. They can either end their turn and score or take a risk. The risk, however, comes with a possible reward. The player could score even more points than what they already have. Or, they could score less and possibly lose it all. It’s up to the player to decide and there is no “wrong” way to go about it. Either way, players should prepare themselves for an onslaught of painful second guessing.

However, there are 3 conditions where the decision is made for the player, thus removing any stress.

Ending a turn to score (be it forced upon the player or the player’s choice) allows the player to count the number of Maidens on the Hero card and record that as the score for their turn. Feel free to score each turn separately or add the score to the player’s total score. The player’s turn is now over and all the dice and cards are passed to the next player in turn order sequence.

If the player’s turn does not end due to scoring or being forced to stop, the player can continue. All the Heroes and Monsters are picked up and the player starts their turn again at step 1 noted above. Maidens are NEVER re-rolled.

If the player ends their first turn without saving a single Maiden, they receive an Epic Fail card. Their turn ends and they will most likely be teased a bit for their “dice fumble”, but they are given a powerful ability for their misfortune. On the player’s next turn, they can use the Epic Fail card to change the rolled value of any 1 die. The Epic Fail card can only be used once and only on the player’s first roll of their next turn. It’s a “use it or lose it” kind of thing. 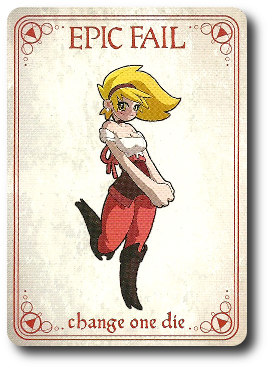 The end games starts when any player’s score equals the number of players multiplied by 20. For example, in a 3-player game, the first player to obtain 60 or more points would trigger the end game. The rest of the round is then completed as normal. When the round is done, all the scores are tallied and the player with the most points wins the game.

To learn more about Monsters and Maidens, visit the game’s web page.

The Child Geeks fell in love with Monsters and Maidens right from the start. The younger Child Geeks liked to make “battles sounds” when they canceled out Heroes and Monsters. A few of them even went “Help! Help!” when the Maidens were transferred to the Monster card. I’m not going to lie to you; it was crazy adorable. According to one Child Geek, “I’ve played games like this before and I don’t think it’s anything new, but I still think it was fun. I like the idea of being a hero and rescuing the princesses.” Oh, I should probably mention that all the Maidens became Princesses and the Heroes became Mario. Care to guess who the Monsters represented? Another Child Geek said, “This game is easy! And then it’s hard! I don’t like losing the ladies to the green guys.” When all the games were over and the Maidens were safely back in their castles, the Child Geeks voted to approve Monsters and Maidens. 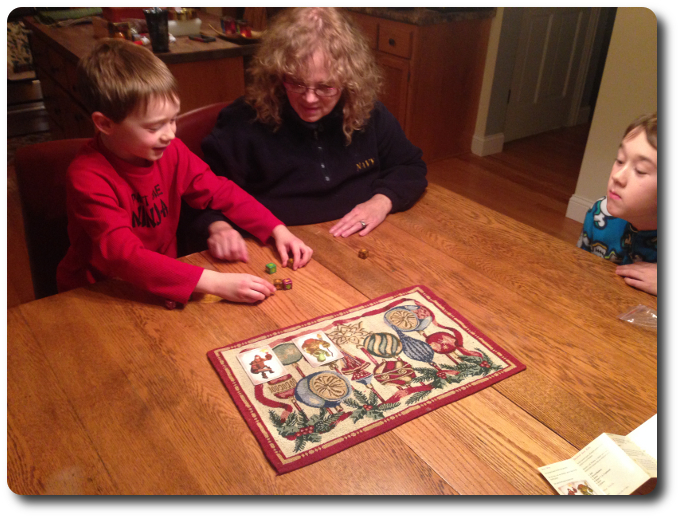 A Child Geek teaches a Grandma Geek how to play

The Parent Geeks found the game to be mediocre at best. According to one Parent Geek, “I didn’t feel like there was ever a lot to consider in the game. Most of the time, the choices were really obvious and I just had to decide if I wanted to do the obvious thing or the dumb thing.” Another Parent Geek said, “I like playing this with my kids, but I wouldn’t want to play this with my adult friends. It’s way too simple and straightforward.” To be fair, the majority of the Parent Geek had played games like Monsters and Maidens before and didn’t find anything intriguing about the game as a result. Only one non-gamer had not and they found Monsters and Maidens to be “fantastic”. The majority of Parent Geeks disagreed, but couldn’t find much fault in the game.

The Gamer Geeks didn’t care for Monsters and Maidens. According to one Gamer Geek, “I find this game to be too random, unimaginative, and uninventive. It’s like every other risk taking dice game I have played and is most likely the worst one I ever want to play.” A bit harsh and his point-of-view was not shared by every Gamer Geek. Another Gamer Geek said, “There is nothing wrong with games like this, but they don’t offer much in the way of a challenge. The amusement comes from seeing how close to the edge you can go without falling.” And finally, another Gamer Geek said, “No, nothing wrong with this game. It’s just not a game that provides much in the way of a challenge. Games like that don’t interest me.” When all the games were over, the Gamer Geeks thought that Monsters and Maidens was too simple to be of any fun on their elitist gaming table.

Monsters and Maidens is pretty generic. It offers nothing new that hasn’t already been done and is actually much simpler than many press your luck Dice games I’ve played. I’d argue that Zombie Dice and Martian Dice require more thought than Monsters and Maidens. Many times during our games, the correct course of action was overly obvious to the player, making decisions easy. But let us keep in mind that these are observations based on a point of view belonging to someone who has played many games. The unfortunate reality of being familiar with so many different games is that you start to see the same thing over and over again in slightly different forms. As I felt I had played Monsters and Maidens before, it never captured my interest.

This is only bad news for those who are looking for a new press your luck Dice game or already have one too many dice games in their collection. If you fall into either of these two groups, I don’t believe you’ll find much in Monsters and Maidens to get excited about. If, however, you are new to games – especially press your luck Dice games – then you will be very happy with Monsters and Maidens. It’s easy to learn, easy to teach, and fast to play. Very young Child Geeks can join the fun, too, since all you are doing is matching symbols and moving dice. Perfect, in fact, for families who are just starting their board, dice, and card game hobby adventure.