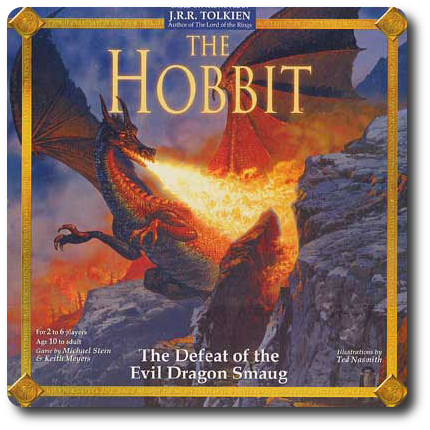 Note:  This review is for the 2001 game titled The Hobbit. The game’s full title is “The Hobbit: The Defeat of the Evil Dragon Smaug”.  There are a small number of games with “Hobbit” in the title, including a new release by Fantasy Flight Games.  See GeekDo.com for a complete list of Hobbitish games.

The Hobbit is a light “roll and move” game with simple conditional  “success vs. failure” mechanics.  There is very little player interaction to speak of, reducing the game to little more than a race to the finish line.

The board is put in the middle of the playing area and the two decks, the Adventure deck and Gandolf’s Gifts deck, are separated, shuffled, and place on the board.  The Lonely Mountain is placed in the middle of the board and Smaug is attached to the top.  A number of jewels are also placed on the mountain representing Smaug’s treasure hoard.

Lastly, each player takes a playing pieces and places it on the starting area labeled “Bag-End, Under-Hill”.  The game is now ready to play. 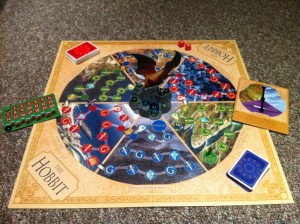 Jewels are obtained in the game by traveling around Middle Earth.  The player will have an opportunity to land on spaces that automatically provide a jewel or offer a chance to attempt to steal a jewel from Smaug. Jewels can also be won and lost to other players through a very small number of Adventure cards.  Optionally, a player may spend jewels to obtain a gift from Gandolf.

The Adventure Cards and Gandolf’s Gifts

The Adventure cards are drawn only when the player lands on an adventure space.  The cards will specify what action the player must take and provides an automatic success conditional statement.  Adventure cards could require the player to memorize a short poem or ask them to answer a riddle. Success and failure conditions are always listed, as are the rewards and penalties.  In most cases, the player may choose to test their luck to determine if they are successful or not.  This is done by a playing the equivalent to  “Rock/Scissors/Paper” using a spinner.

Gandolf’s Gifts cards come in four different categories. These are Gandolf’s Spells, Helpful Items, Weapons, and Friends.  These cards are obtained by landing on a specified space on the board and paid for by trading in one of the player’s jewels.  The gifts are necessary to meet the specified criteria for automatic success of Adventure cards, but are also necessary for the ending of the game.  Some gifts have a Smaug symbol on them which indicates it is a necessary item to fight Smaug.  The player must have at least one of these gifts with a Smaug symbol before they can attack Smaug at Lonely Mountain.

At the beginning of the player’s turn, they roll 2 six-sided dice.  The total number of spaces they can move is either the total of both dice or the value of one of the two dice.  This provides the player with a possible of three values in which to select from before moving.  For example, if the dice values rolled were “3” and “6”, they could move 3 spaces, 6 spaces, or 9 spaces.

Movement automatically stops whenever the player lands on a Safe Haven space or their movement would take them beyond the Safe Haven space. While this space does temporarily stop their forward progress, it rewards them with a jewel and the ability to swap out one of their gifts from Gandolf.

There are two spaces on the board that provide the player with a shortcut. The player must have the right Helpful Item before they can use them, however.

The game ends when the last jewel is removed from Smaug’s treasure horde. All of the players count up their total number of adventure points and jewels. Any player who successful attacked Smaug at Lonely Mountain is rewarded and additional +5 adventure points. The player with the highest total wins the game.

The Hobbit does not score well when it comes to games. This is primarily because the game provides very little in the way of challenging game play and almost no player interaction.  But don’t let that throw you off.  I found it to be a simple but entertaining game I could enjoy with my children.  It is colorful, fast, and has a giant dragon sitting on a mountain in the center of the board.  Essentially, a lot of good elements to get kids excited about the game.

The game also challenges my young children to do simple math, memorize short poems, and do some critical thinking regarding answering riddles. These challenges are few in number in the Adventure deck which allows for even the youngest player to still have a fighting chance to win the game.

Because the game is heavy on the random determination of success or failure, having a great deal of gaming experience is not at all required.  This makes the game especially easy to play with young children and individuals who do not have much in the way of board game experience. 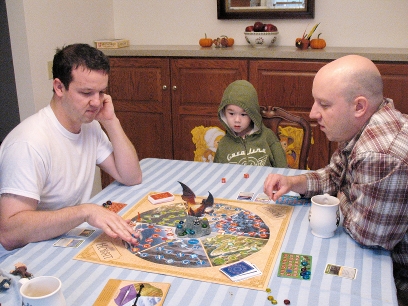 Simply put, there isn’t much to this game in the way of challenge and strategy.  However, it is a great introductory fantasy board game with plenty of dice rolls and random adventures to keep a young player happy.  It is for this reason, I love the game.

If you don’t like randomness and almost zero strategy, this game is not for you.

One Response to The Hobbit Game Review