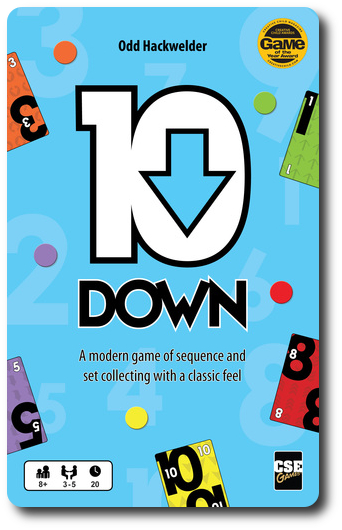 Simplicity suggests minimalism. That is to say, a lot can can be gained with little. While many might think that “more is better”, there is a growing movement of minimalists who challenge that way of thinking, choosing to instead reduce and focus on the essentials rather than acquire bulk. In this game, simplicity is a given, but the process of winning is anything but a minimal effort.

10 Down, designed by Odd Hackwelder and published by CSE Games, is comprised of 100 Number cards, 10 Mission cards, and 50 tokens. The cards are as thick and as durable as your standard playing card. The tokens are made of cardboard.

Game Set Up and the Basics of Play

To set up the game, first shuffle the Number cards and deal 10 to each player, face-down.

Second, place the remaining deck of Number cards face-down in the middle of the playing area and draw the top 3 cards, placing them face-up in a row, to create 3 separate discard piles.

Place the tokens to one side of the game playing area and leave the Mission cards in the box for now.

Game Type One: Your Standard Game

The standard game challenges players to create a sequential run of cards starting with “1” and ending in “10”. Since players will only ever have 10 cards in their hand at a time, they are forced to drop some Number cards for others. As they do so, they will also be collecting different types of colored Number cards.

Once the points are counted and tokens are given, the player discards their cards and is given 10 new cards. All other players KEEP THEIR CARDS. Game play then resumes until 1 player has earned 10 tokens.

The color mission game uses the basic game rules, but challenges the players to collect cards of a certain color type. Each player is dealt a secret Mission card at the start of the game that tells them the number and color of cards they need to get. Tokens are earned with color runs and the token color given matches the color of the cards in the run. For example, a color run of 3 cards would award the player 1 red token, but a color run of 5 red Number cards would earn the player 3 red tokens.

Identical in every way to the standard game, except that players are grouped together into teams. Team members can talk to each and share what cards they have in their hand, strategizing how they can complete their sequence as quickly as possible. The first team to collect a combined total of 10 tokens wins the game.

To learn more about 10 Down, visit the game’s web page.

The Child Geeks caught on to what the game was about before the first hand was even done. They played both the standard game and the color mission game, finding both to be fun and different enough to be thought of as two separate games. According to one Child Geek, “I like the game because it has easy rules and is fun to play. This isn’t a kids game, though. You have to play hard to win.” Another Child Geek said, “I like the game and it feels great when you get your tokens!” All the Child Geeks seemed to be enjoying themselves except one. When I spoke to him, the Child Geek said, “I can’t get the colors I need.” Turns out this Child Geek was attempting to collect cards of all the same color, not because they were going for the big win, but because they misunderstood the rules. Whoops. Once we got that corrected, he was off and running with nothing but smiles. When the games were over, the Child Geeks voted to approve 10 Down.

The Parent Geeks found the game to be a lot of fun with their family and with their peers. Out of all the Parent Geeks, the non-gamers and casual gamers enjoyed the game the most. According to one non-gamer Parent Geek, “The game is easy to understand and easy to follow. It doesn’t introduce a lot rules or feel terribly complicated. And yet, it is still a gripping game.” Another Parent Geek said, “A lot of fun with the family. It’s easy enough for my 7-year-old to play and engaging enough to keep adults intrigued. A real winner for my gaming table.” The more serious card players, those who enjoyed games like Hearts and other classic card games, always strove to collect as many matching colors as possible. One player even won the game with a hand full of the same colored cards, much to the chagrin of his opponents. When the games were over, the Parent Geeks voted to approve 10 Down.

The Gamer Geeks were not impressed. According to one Gamer Geek, “This is a very simple game. Too simple. All a player is doing is collecting cards – that they can see – to create a sequence of 10 cards in sequential order. When they do so, they earn a token. If they match a lot of colors, they earn even more colors. The game feels like something you’d play at your grandma’s.” Another Gamer Geek said, “A simple game, but a good one for non-gamers and casual players. Not enough to the game to interest me, however.” And finally, one other Gamer Geek said, “It’s a good enough game for what it is, but serious gamers are clearly not the target market here.” After playing the game several times, the Gamer Geeks all agreed that 10 Down was not a game they were interested in playing ever again.

10 Down is about as basic a set collecting card game as you can get. It does away with flash and flare to provide a straightforward game playing experience. For our veteran gamers, this was seen as a fault. For our Child Geeks and Parent Geeks, this was a huge plus. The different game types make the game a bit more interesting, either putting emphasis on speed collecting or careful hand management. Both are suitable for younger and older players, but it never tickled the fancy of serious gamers.

If you enjoy card games and are looking for one to play with the family and friends, do look into 10 Down. While it’s simplistic in many ways, it’s a solid game that will deliver fun and an entertaining challenge.