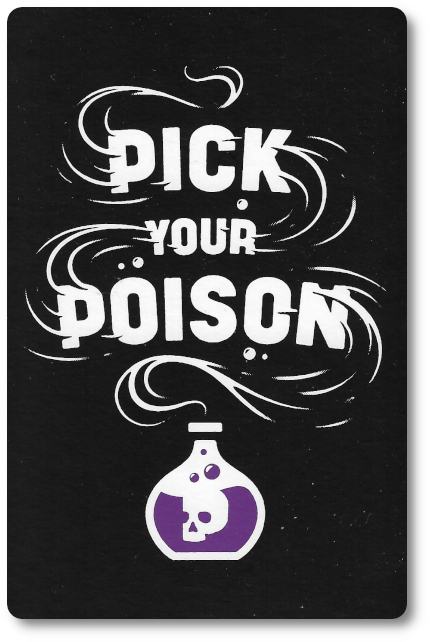 American television personality, author, and psychologist, Dr. Phil McGraw, said “Eighty percent of all choices are based on fear. Most people don’t choose what they want; they choose what they think is safe.” In this game, the players are never in jeopardy of being harmed, but that won’t change the difficulty of making a choice. Pick your poison from two horrible scenarios. Your decision will decide the game and playing it safe is not an option.

Pick Your Poison, designed by Tony Pellerito and published by Player Ten, is comprised of one game board, 350 Poison cards, 48 Choice and Double Down cards (three cards per player for a total of 16 players), one score sheet, and five blank Poison cards. The cards are as thick and as durable as your standard playing card. The game board is made of thick cardboard and very sturdy. Not included with the game, but necessary to play, is a pen or pencil to help track players’ scores.

Third, assign one player to be the score keeper and give them the score sheet.

Pick Your Poison is played rounds with no set number of rounds per game. During each round, a new player will be the “Judge”. A Judge’s turn is summarized here.

The Judge reviews the Poison cards in their hand, attempting to find a difficult situation for the other players to consider. The selected Poison card is placed face-up by the Judge on the “A” space found on the game board.

All the other players now look at their hand of Poison cards and select one to give to the Judge. Selected cards are passed to the Judge face-down so the other players do not know who is giving what card. Players should attempt to select a Poison card that creates a difficult choice between their card and the played Poison card by the Judge. For example, the Judge played “Have Walrus tusks” as their Poison card, placing it face-up in the “A” spot. One of the players passed the “Have the arms of an infant” Poison card. Neither of these two choices are something any average person would agree to.

Having now selected two opposing and not super great outcomes, the players have an opportunity to ask the Judge questions regarding the poisons to be quaffed (figuratively speaking). The questions should be scenario based. For example, a player could ask “if I had infant arms, would I be able to use them as well as I use my own arms?” or “can I have the walrus tusks removed by a dentist?”. The Judge answers these questions however they like, further elaborating the complexity of the choices before the players.

The goal by the Judge is to make both “A” and “B” choices as nasty as possible, doing the best they can to make one choice no better than the other. For example, the Judge could respond to both of the player questions with something like “you would have very little control and no strength in your baby arms other than to suck on your fingers” or “no dentist in the world is skilled enough to remove your walrus tusks without extreme plastic surgery to your jaw which would cost you more than your insurance can cover.” 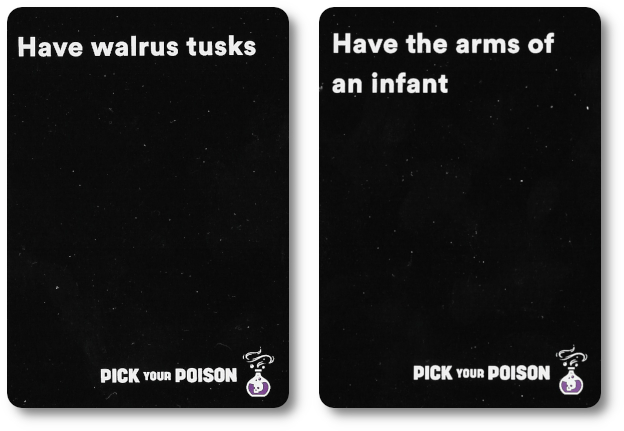 All the players (except the Judge), having been given additional details about the two choices, must now make one. This is done by each player (again, not the Judge) secretly selecting an “A” Choice card or a “B” Choice card, matching the card letter with their Poison card choice on the game board. Optionally, a player can decide to play the Double Down card.

Once all the players have selected their choices, they play them to the table in front of them, alongside their Double Down card if they so choose. The round is now scored.

Step Six: Ending the Round

The round is now over. All players retrieve their Choice cards and their Double Down card if played and not lost. The played Poison cards in the “A” and “B” spaces on the game board are discarded. Finally, each player is dealt Poison cards until their hand size is back to six. A new round now begins with the title of “Judge” being passed to the next player in turn order sequence.

The game continues as noted above until one player has scored 15 or more points at the end of the round. This ends the game and the player with the most points wins. The game rules suggest the game ends as soon as a player scores 15 points, but we found it to be more fun to complete the round.

There are a small number of game variants included with the rules. Any number of them can be added to the game. Each are summarized here.

In addition, the game comes with five blank Poison cards. These should be used to create some really horrible choices, which can then be added to the rest of the Poison cards. One of our favorites was “pick up the dog poop with your hands”. Yuck, right? You’d be surprised how many people voted for that poison when compared to the other…

To learn more about Pick Your Poison, visit the game’s website.

The Child Geeks had a lot of fun with this game, coming up with crazy stories about the poisons and laughing and saying “yuck” with equal fervor. According to one Child Geek, “This game reminds me of Apples to Apples, but is a lot more fun. You get to talk more about what you are deciding about and get to ask questions before making your choice.” Another Child Geek said, “I liked this game a lot. My favorite part was being the Judge. It let me be creative and think of really nasty things the other players had to think about!” While Pick Your Poison does suggest that the players will be asked to make tough decisions, none of the Child Geeks ever suggested that this element of the game play was a burden or stressful. In fact, the harder the choices, the more fun they had. All the Child Geeks voted to approve the game.

The Parent Geeks also had a lot of fun. According to one Parent Geek, “I understand there is not safe for work version of the game, and I’m glad we didn’t play that one, because I think this game is great for families. The choices are not terrible, but none of them were so outrageous as to make any of them inappropriate to play with my kids or with other adults who might have more conservative views than myself.” Which should not suggest that players are unable to make the game uncomfortable. As one Parent Geek put it, “One of my favorite things to do was to play two poisons that were not all that bad and then make them really, really bad. Oh, so bad. Super bad. As in I’d rather die bad!” The Judge has complete freedom to further expand the selected poisons and their consequences. This was explored in great depth and disgust by the Parent Geeks. The end result was a poison that all the players gladly took and cheered for.

The Gamer Geeks found the game to be OK, but nothing great. According to one Gamer Geek, “Pretty much your standard party game. I liked how the game designer made the points awarded to the players based on votes rather than the personal choice of the judge. Other than that, I found the game to be forgettable.” But this was not a shared view by other gaming elitists. Another Gamer Geek said, “I liked this game. It worked well with big and smaller groups, required creativity, communication, and great storytelling. I liked how the scoring at the end of each round was based on personal choice rather than trying to figure out what the other players would try to do. Fun little game.” When all the votes were in, the Gamer Geeks gave Pick Your Poison a mixed endorsement.

First, let me address the Poison cards in the game. They are all safe enough to play at a religious event or at your ultra conservative friend’s house. That being said, not all of the Poison cards are all that terrible, either. This isn’t a problem, but it did force a Judge to be creative. This is not a game you can sleepwalk through. As the Judge and as the other player, you need to think critically and be creative at the same time. This kept all the players engaged and laughing. Pick Your Poison is a social game, where players are working together to create really horrible choices. If players want a more adult themed version, they can write such scenarios on the blank Poison cards or invest in the Not Safe For Work edition of the game (which we did not review).

Overall, I found the game to be a strange mix between Apples to Apples and Cards Against Humanity, but slower and less shocking. The game was entertaining, but it wasn’t the game I was enjoying so much as the players I was with. When I played the game with the Child Geeks, the choices put in front of me where selected based on the “yuck factor”. When playing with adults, the choices made were based on perceived hits to my financial and social standing. Mix the two and you get some interesting conversations.

As a party game, I think Pick Your Poison is a good one and certainly not a bad choice for those new to the game genre and looking to put something different on their gaming table. For those already familiar with games like this, you will most likely find nothing new to be excited about, as Pick Your Poison is a derivative of the many, many games before it.