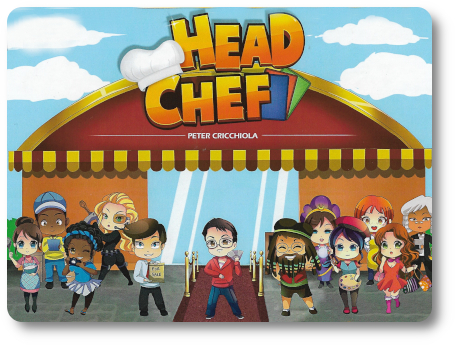 American celebrity chef, author, travel documentarian, and television personality, Anthony Bourdain, said “If anything is good for pounding humility into you permanently, it’s the restaurant business.” In this game, you’ll start your business from a food truck, move up to a cafe, and finally hit the big time with your own restaurant. But the road to success is paved with many meals and there is a lot to trip you up. Prepare your ingredients and get cooking!

Head Chef, designed by Peter Cricchiola and to be published by CStar Games, will reportedly be comprised of 41 Ingredient cards, 24 Power cards, 16 Character cards, four Menu/Reference cards, 20 Action cubes (in the colors green, yellow, blue, and red; five cubes per color), four AI cards, and one Score track. As this is a review of a prepublished game, I cannot comment on the game component quality.

To set up the game, first place the Score track in the middle of the playing area where all players can easily reach it.

Second, shuffle the Ingredient cards and place them face-down next to the Score track. This is the Ingredient draw deck for the duration of the game. Leave room for two unique discard piles. The first is Trash (your normal discard pile) and the other is Leftovers, which are cards that were discarded, but can be used again.

Third, hand out one Menu card, a set of Power cards, and the five Action cubes of the same color to each player. 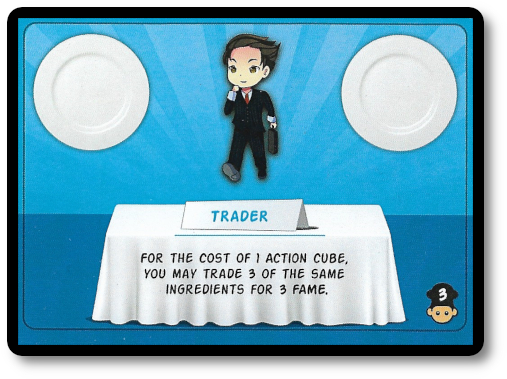 That’s it for game set up. Let’s get cooking!

Head Chef is played in rounds and turns with no set number of rounds per game. A player’s turn during a single round of game play is summarized here.

The player has several actions to pick from and can take any number they like, in any order, and duplicate the same action multiple times as long as they have Action cubes to spend. When they pick their action, they spend one Action cube, moving it from the unused pile to the used pile on their Character card. The actions are summarized here.

For the cost of one Action cube, the player can draw one Ingredient card, adding it to their fridge.

For example, to earn one Fame, the player can place the “Bread” and the “Meat” Ingredient cards on their turn to create a simple meal. Not a great dish, but it’ll get the player one step closer to victory. 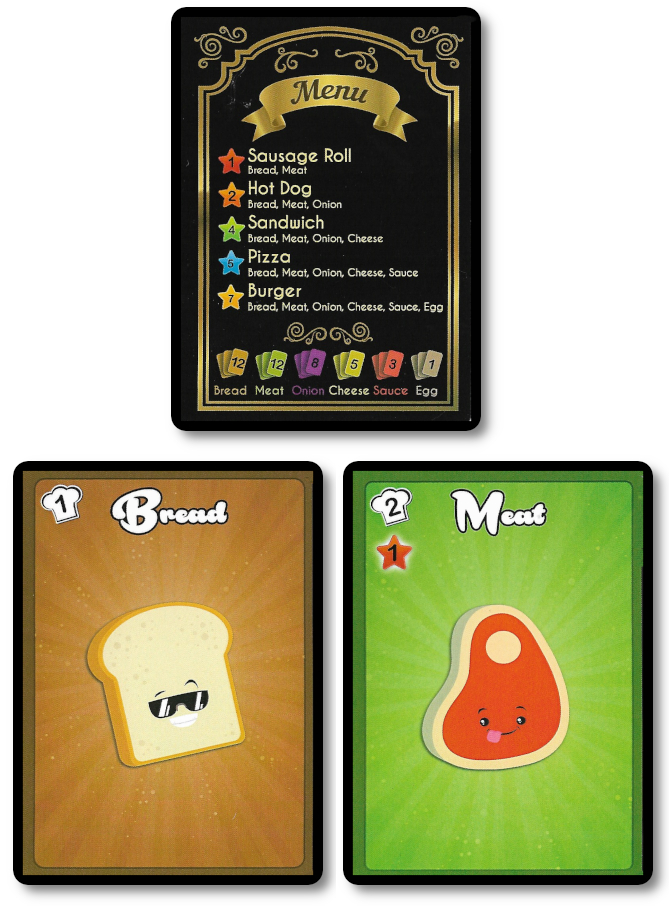 For the cost of one Action cube, the player can play two matching Ingredient cards to gain one Fame.

For the cost of one Action cube, the player can take any Ingredient card from their hand and discard it in the Trash pile.

For the cost of one Action cube, the player can play one of their Power cards. A player can only activate each Power card once per game, so choose wisely. Once the Power card is activated, it’s resolved and flipped face-down to show it has been used. Power cards can do the following:

After the player has completed their actions, the player must discard down to four Ingredient cards in their fridge, discarding any cards the player does not want to the Leftover pile. Then the player moves all their Action cubes from their used pile to their unused pile on their Character card. This ends the player’s turn. The next player in turn order sequence now takes their turn.

Closing for the Day

After all the players have had a chance to buy or pass on the Leftovers, any remaining cards in the Leftover discard pile are moved to the Trash discard pile. A new round now begins starting with the first player.

When the player reaches 10 Fame on the Score track, they must Upgrade. This is done by placing an Action cube on the Cafe space on the Score track. This reduces the total number of Actions the player can take during their turn, but they are closer to winning the game as a result. Thematically speaking, the Action cube is being set aside to account for all the extra work and time it will take to run a Cafe instead of a Food Truck.

Similarly, when the player reaches 20 Fame on the Score track, they must Upgrade again. This time the player must dedicate a total of two Action cubes, placing them on the Restaurant. 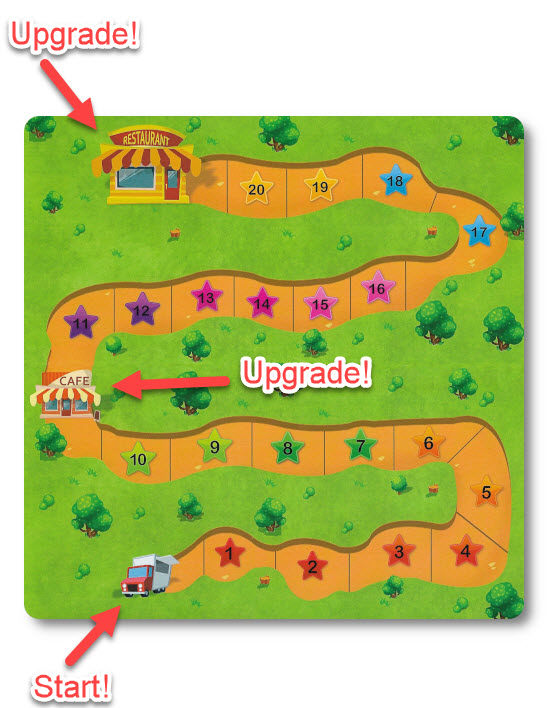 After a player upgrades, they can continue to score Fame.

The game continues as noted above until one player has reached the Restaurant space on the Score track using their Action cube that is keeping track of the Fame points.

Head Chef can be played as a solitaire game. AI cards are used in place of living players. Victory goes to the player if they reach the Restaurant space before the AI player.

Head Chef can also be played in teams. Combinations includes two versus two, two versus one, and three versus one (which, admittedly, doesn’t sound all that fair). When playing as teams, each player is given a fifth action to use. This fifth action allows the player to either give or take one Ingredient card, sharing with their fellow team members. Various other rules also apply, but the game play remains more or less the same.

To learn more about Head Chef, visit the game’s website or Kickstarter campaign.

The Child Geeks enjoyed themselves, talking about all the different foods they could make with the cards in their hand. However, the Child Geeks started to dislike the lack of options to cook. According to one Child Geek, “I can make more types of food with the cards I have. I wish there were more options.” Which should not suggest that the Child Geeks were short on things to prepare in their table top kitchens. The number of possible combos (including just playing a double Ingredient card of the same type), kept the Child Geeks digging for just the “right stuff” to make what they wanted. As one Child Geek put it, “The game was fun to play and also made me hungry.” All the Child Geeks voted to approve Head Chef.

The Parent Geeks found the game to be light and entertaining with their family as well as with their peers. But mostly with their families. According to one Parent Geek, “I had a lot of fun playing this with my kids. Easy rules and game play is advanced enough to keep you interested without being overwhelmed. When I played it with adults, we found the same game to be a bit too easy until you start using the Power cards, that is! This is where the game gets really interesting with the adults. Although, I think I prefer the game with my kids.” Another Parent Geek said, “A game I can play with my kids, mother-in-law, and my friends. There was always something to enjoy!” All the Parent Geeks voted to approve Head Chef.

The Gamer Geeks liked what the game was about, finding it to be a good mix of set collecting and player interaction. According to one Gamer Geek, “The game is straightforward. No real surprises or disappointments. I liked how the Leftover pile was used each round, giving players a moment to pause and reflect if they really wanted to drop an ingredient or not.” This was a point that all the Gamer Geeks enjoyed. By discarding an Ingredient card, the players left it available for their opponents to possibly pick up and play. Drop the wrong one at the wrong time and you award points to an opponent…which the Gamer Geeks hate to do. As one Gamer Geek put it, “The game is light, easy to learn, fast to play, and has a great mix of take-that mechanics and thoughtful card plays. I enjoyed it.” All the Gamer Geeks voted to approve Head Chef, finding it to be a reasonable game to play as a starter or filler at their elitist gaming table.

At first, Head Chef feels a bit busy. Lots of cards, lots of actions, and lots of possibilities. As the game progresses, the players lose the number of actions they can take (via Upgrades and used Power cards), and the game play becomes more intense. “Narrower” is how one of our players put it, suggesting that the game play itself not only changes, but also becomes more restricted. Which it does. This was a good move on the designer’s part, as players can start to runaway with points, jumping ahead of their opponents. Due to the game throttling the lead players through reduced actions, it keeps everyone on the track and in constant competition for the finish line. None of our players ever felt left behind, but they did feel restricted.

Which was the only negative comment I heard repeatedly through our playtesting and review process. Players had mixed feelings about being forced to slow down when they were winning. It took some of the steam out of their engine and added more frustration than fun. All well within tolerable limits, mind you, but getting ahead in this game comes with a penalty. While some (like myself) found it to be a brilliant way to balance the game, others saw it as an unnecessary level of game play that felt like a punishment.

I enjoyed the game, finding it to be on the lighter side of what I normally play with my Gamer Geek friends and perfect for my family and casual game players. A nice mix pf intelligent resource management and risk taking. Limited actions keeps the player focused on the most important tasks at hand and each turn is an opportunity to score points. Do serve this game at your next gaming event and see if you have what it takes to be the head chef!