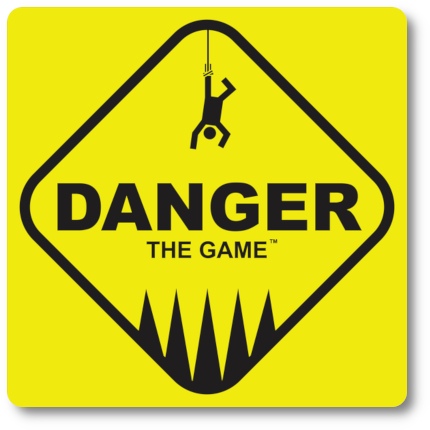 American comedian, actor, juggler and writer, W.C. Fields, said “The world is getting to be such a dangerous place, a man is lucky to get out of it alive.” For many of us, our daily lives are full of predictable situations and outcomes. The most dangerous experience we’ll have are more of an annoyance than actual threat to life and limb. In this game, prepare to be put in very bad situations that you’ll have to quickly determine how best to get out of using your imagination, wit, and lot of persuading.

Danger: The Game, designed by Phillip Blackwell and published by Origami Whale, is comprised of 70 Danger cards, 70 Skill cards, 70 Tool cards, and 60 Plot Twist cards. The cards are as thick and as durable as your standard playing card. Illustrations on the cards are similar to the same you’d find on warning signs and traffic symbols. Very minimalistic, but humorous at the same time.

To set up the game, first take the Danger, Skill, and Tool cards, shuffle individually, and place face-down to create three draw decks.

That’s it for game set up. Decide who will go first and begin.

Danger: The Game is played in rounds and turns with no set number of rounds per game. A game round is summarized here.

Step One: Identify the Danger

The active player, who is the victim for the round, draws a Danger card, reads it out loud, and places it face-up in front of them for all the players to see. The active player has the option of expanding on the danger represented by the card. While not necessary, additional details help the game by providing a more vivid scene and scenario.

For example, the active player draws the Danger card in the following image. They read the text out loud and place the card down. They then add, “I also notice that Mr. T is wearing his bunny slippers. It is clear that Mr. T is not happy that I have seen him in his preferred footwear.” And on a side note, this situation actually occurred during one of gaming sessions which lead to a good ten minute debate regarding if Mr. T would really wear bunny slippers. No conclusion was reached. 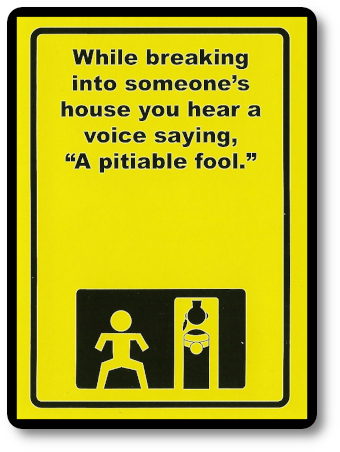 Step Two: To the Rescue!

In turn order sequence, starting with the rescuer to the victim’s left, each rescuer details their plan using the Tool and Skill cards they selected. The goal here for the rescuer is to provide a fool-proof plan with as much detail as possible using the cards they selected as the base of their narrative. For example, a rescuer plays the “A Fake Police Badge” Tool card and the “Unflinching Poker Face” Skill card. They tell the group, “This is what you need to do. Show Mr. T your fake police badge, but only flash it. Just give him a quick look. Then, look him right in the eye and tell him to stop his jibber-jabber, because you are a policeman, who is here to make sure there are no fools to pity!” 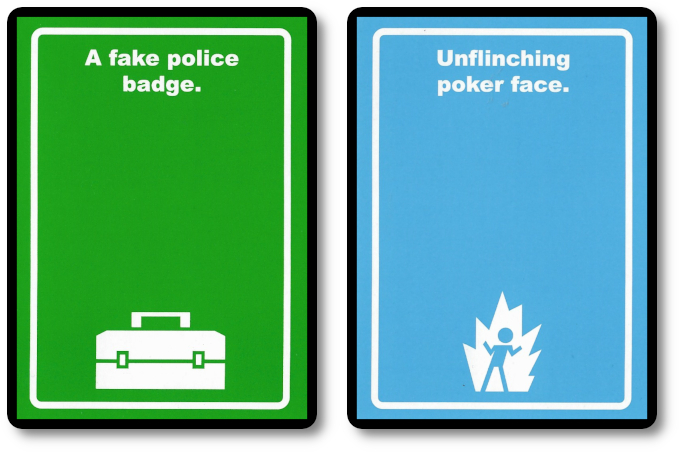 After each rescuer describes their plan, all other players (including the victim), now attempt to discredit the proposed plan by pointing out weak spots. The current rescuer can argue and counter, but the victim gets the final say. The goal here for the other rescuers is to reduce the success of the rescue plan. For the victim, the goal is to ensure that whomever saves them provides the most creative and entertaining solution.

After each rescuer has described their plan, the round continues.

The victim now considers all the proposed plans and picks one that they think would work. This is, of course, highly subjective as the victim is not provided any guidance regarding what a “good plan” is. Their selection process might include picking the most hilarious or the most logical. Possibly both. Once the victim decides, they award the Danger card drawn at the top of the round to the rescuer, congratulating them on a well-formed rescue plan that worked.

All played Skill and Tool cards are now discarded and new cards are drawn. The next player in turn order sequence is now the victim and a new round begins.

The game continues as noted above until one player is awarded their third Danger card. This player is the winner!

Included with the game is a deck of Plot Twist cards. These add additional rules and conditions to each round, breaking tools, upsetting skills, and enhancing dangers. To use, shuffle the Plot Twist cards and place face-down with the other decks during game set up. During the game, opponents can play Plot Twist cards against the current rescuer’s escape plan. Plot Twist cards can be attached to played Tool, Skill, and Danger cards (matching the colored border with the targeted card), but only one Plot Twist can be played per card type. When the victim decides which rescuer saved the day, they give that player the Danger card, but all other players draw one Plot Twist card, adding it to their hand. 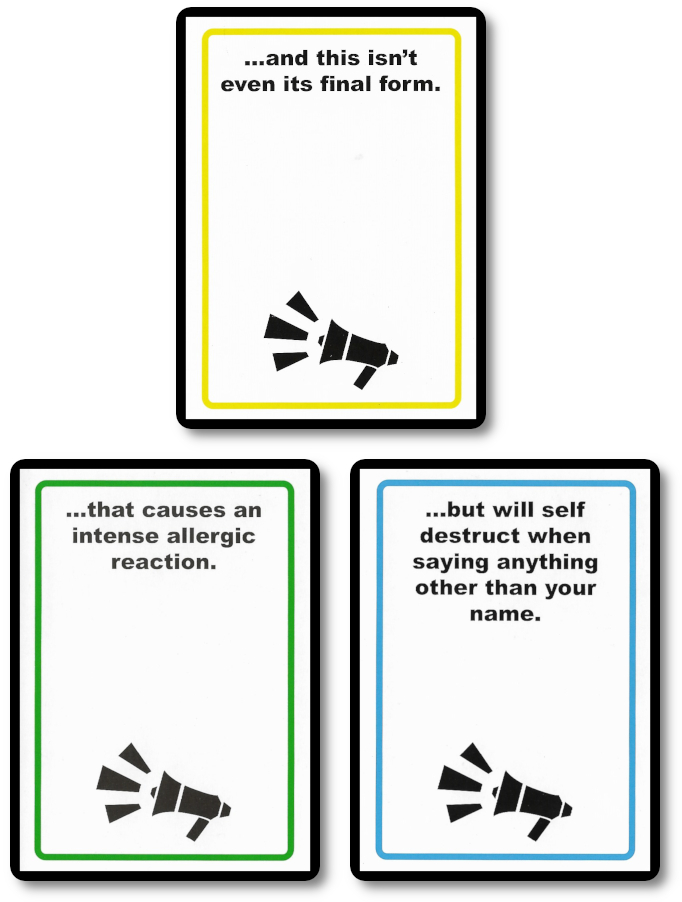 The game theme can be changed from victim and rescuers to evil mastermind and hapless heroes. Each hero selects a Skill card, placing it in front of them, and then simultaneously revealing once everyone has a card selected. The evil mastermind than places a Danger card in front of each hero that they believe will lead to their untimely end. The heroes must now explain how they get out of the situation using the Skill card they selected, the Danger card they were dealt, and one Tool card of their choice. The evil mastermind, after hearing all the plans to survive, selects one hero who did, awarding that player the Danger card.

To learn more about Danger: The Game, visit the publisher’s website.

The Child Geeks had a great time coming up with fantastic stories of derring-do and lucky escapes. According to one Child Geek, “What I really like about this game is how creative you get to be with describing the danger and the really great plans to get out of it.” Another Child Geek said, “The only part I don’t like about the game is not being picked to win the card especially when I know I have the best plan.” Danger: The Game does require the players to be comfortable with not being picked for reasons that they don’t necessarily agree to. But this was seldom a problem, with only a few hurt feelings along the way. For the most part, all the Child Geeks had a wonderful time from start to finish, resulting in this group awarding the game their full approval.

The Parent Geeks found Danger: The Game to be a creative and entertaining party game they could play with their family and friends, both as individual groups and mixed. According to one Parent Geek, “A fun game of creative and humorous problem solving. I especially like the Plot Twist variant, but I recommend that be played with adults only.” And for good reason. When we added Plot Twist cards with the Child Geeks the game took a lot longer than everyone felt it should. Another Parent Geek said, “A fun game to play with my friends over some wine, beer, and assorted salted snacks. I’d play it again.” When all the votes were in, the Parent Geeks decided that the only danger to be found in this game was laughing too hard, possibly pulling a groin muscle in the process.

The Gamer Geeks were not impressed. According to one Gamer Geek, “Oh, look, another Apples to Apples game. Boring. I found the game play to be formulaic, a real snorfest, and worse of all, a complete copy of other games already on the market. Boo, I say.” While the majority of the Gamer Geeks agreed that Danger: The Game brought nothing new to the table, several Gamer Geeks reminded their peers that their role was to determine if the game was entertaining. One Gamer Geek said, “Yes, this game has been done before and has gone by many different names, but I still found it to be fun. I think if I hadn’t played the other games like this, I’d really enjoy it. I don’t think it’s a bad game. It’s just a game I’m not interested in.” When all the votes were in, the Gamer Geeks voted to reject Danger: The Game.

While the Child and Parent Geeks remain fairly consistent in their choices for games, the Gamer Geeks continue to be a mystery to me. Just the other week they reviewed another Apples to Apples game derivative and voted to approve it. Here they rejected it. Why is what I ask, but have never been given a solid reason. My current theory is that the Gamer Geeks are terribly fickle. Eye-rollingly so. But I digress.

Danger: The Game is designed to be a party game to play with lots of folks. Three at minimum and I suggest no more than eight at maximum. We played with 10 and the game took way too long. Way. Too. Long. I also suggest you use the Plot Twist cards, but only after playing the game without them at least once first. The Plot Twist cards add an additional level of entertaining outcomes that always made our groups laugh.

The biggest problem with games like Danger: The Game is that victory hinges on the subjective whim of another. This can be very frustrating and it also allows players to somewhat cheat the system by playing favorites or blatantly not awarding cards to others because it would mean the game would be lost. And while I observed all of this, the game does keep itself on track. Each round someone will get a Danger card which means the game is that much closer to coming to a close. This is not a game you play because you want to win. This is a game you play because you want to be social.

If you are in the mood for fun story telling and have a quick wit, do give Danger: The Game a try.