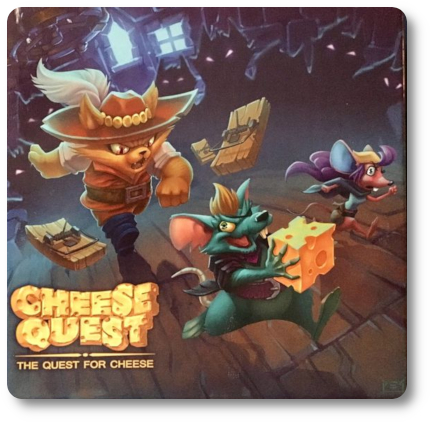 American humorist, actor, and comedian, George Gobel, said “If you build a better mousetrap, you will catch better mice.” In this game, you play as a very capable and brave mouse, focused on ensuring the survival of your nest. But be careful. Many traps and even cats are around every corner. Grab the cheese and beat little mice feet back to safety as fast as you can, or all is lost!

Cheese Quest: The Quest for Cheese, designed and self-published by Phil Schadt, is comprised of four Mouse tokens, six Cat tokens, 12 Cheese tokens, eight Snap Trap tokens, two Humane Trap tokens, three Glue Trap tokens, two Debris tokens, one Yarn token, one Hide token, one double-sided Nest tile, 12 double-sided Room tiles, four Turn cards, and 60 Pantry cards. The tokens are made of thick cardboard or solid wood. The cards are as thick and as durable as your standard playing card. The tiles are as thick as your standard game board. Excellent quality and durability.

When the Cat’s Away

To set up the game, first find and place the Nest tile in the middle of the playing area. The Next tile has two sides. Either can be used.

Second, select six Room tiles (randomly or deliberately) and connect them to the Nest tile clockwise. Soft grey arrows are on each tile that should be pointing to the center tile. Again, the tiles have two sides and either can be used. Place any Room tiles not used back in the game box. 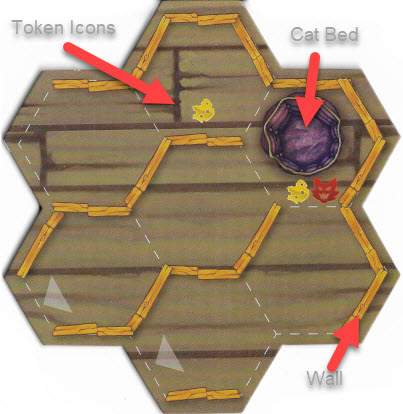 Third, place Snap Trap, Cheese, and Cat token on the game board, matching each token to one icon. Any unused tokens are returned to the game box except for the Obstacle, Yarn, and Shadow tokens which are placed near the game board.

The Mice Will Play

Cheese Quest is played in rounds and turns with no set number of rounds per game. A player’s turn is summarized here.

If the player placed any Yarn or Shadow tokens during their last turn of the previous round, they are now removed from the game board and placed to the side.

Each player is given three actions per turn. There are five actions to choose from. The player can take any of the actions in any order, including repeating the same action. The actions are summarized here.

If the player has less than seven cards in their hand, this action can be taken to draw any face-up card from the Pantry row. The selected card is added to the player’s hand. The Pantry row is not refilled at this time.

For one action, the player can play any card from their hand. Once played, the card is immediately resolved and then discarded. Obstacles can be found everywhere on the game board. An obstacle is considered any trap, cat, and debris. The player can remove the obstacle in a space adjacent to their Mouse token (or if they share a space with a Glue trap) by discarding any two cards from their hand that share the same Card type icon as the obstacle to be removed. Adjacent spaces must be free of any walls that would have otherwise blocked movement from one adjacent space to another.

To learn more about Cheese Quest: The Quest for Cheese, visit the game’s website.

The Child Geeks had a blast with this game, running the gauntlet and picking up cheese. According to one Child Geek, “I really like moving my mouse around, but I like even more moving the cats!” In this game, which is really all about playing “cat and mouse”, moving not only your pawn, but also the Cat pawn, is very important to strategic game play. This was not lost on the Child Geeks from the very start. Nor was the need for thinking several moves ahead. According to another Child Geek, “You see everything in front of you, which makes the game easy to play and to think about. I always knew what I wanted my mouse to do.” When all the votes where in, the Child Geeks gave Cheese Quest their full endorsement.

The Parent Geeks also had a blast, both with their families and with their peers. As one Parent Geek put it, “This is a game that works great on my family table and at a friend’s table. I’ve played this while drinking apple juice and coffee as well as a few spirits with adult friends. In both cases, the game was well received and loved.” The only aspect of the game the Parent Geeks did not enjoy was the lack of space. According to one Parent Geek, “I wish the game board was larger. I think we could just add more tiles, but I don’t know if that would do it. Honestly, what I want here is more of the same, which I think is a great compliment to the game.” When the last morsel of cheese was safely returned to the nest, the Parent Geeks voted and fully approved Cheese Quest.

The Gamer Geeks, being elitist, were much more critical of the game (which is exactly what we expect and want). According to one Gamer Geek, “The game is well designed. Excellent production quality and the rules are well documented. While I would never say this is a bad game – because it isn’t – I don’t think this is a game for true gamers. Nothing really new or challenging here. Good for gamers who have non-gamer friends, but that’s about it.” This point of view was not shared by all the Gamer Geeks. Another elitist said, “I think this is a great game to bring to my table when I want a lighter game that still requires thinking and strategic game play. I like how the cards are used on multiple levels and how everything in the game is both visible and tangible in game play. Great game, in my opinion. Very entertaining.” When all the votes were in, Cheese Quest made the cut, being approved by the majority of the Gamer Geeks.

Cheese Quest is one of those games you’ll be able to get to the table again and again. Setup is very fast and the modular game board with random setup always ensures you have a different game on the table. The rules are easy to follow and the flow from turn to turn keeps the game focused and energized. My only criticism is that I wanted the game to include some sort of “First Player” marker so as to help players keep track of how many players have had their full turn when the endgame is triggered. This is a simple fix, however, and one that can be done by players with nothing more than putting some sort of marker in front of the first player if the need is great.

All of our players enjoyed the game, with the only negative comments coming from Gamer Geeks who have been playing games long enough to have “seen it all” (their words, not mine). In truth, Cheese Quest, for those who have played lots of games will find this title to feel familiar. Not a bad thing by any means, but for those looking for new games with different experiences to add to their collection, they might very well find that this game just doesn’t bring much that is new to the gaming table. Which should not suggest that Cheese Quest is a bad game. It isn’t. I think it’s a very entertaining game.

Do try this little gem when time allows. The game play is fast, entertaining, and best of all, engaging. The majority of our players liked it enough to ask for it again. I think, in the end, the best compliment any game can have is that a player, once they have finished putting the game away, immediately want to bring it out again. Expect repeats.