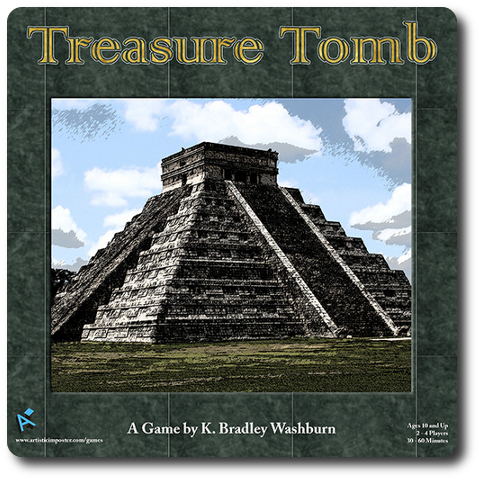 Treasure Tomb, designed by K. Bradley Washburn and published through the Game Crafter, is comprised of 4 game board sections (double-sided), 72 Tile cards, 96 Treasure cards, 4 Player pawns (in 4 different colors), 1 Mummy pawn, and 1 standard six-sided die. The component quality is good, with all the cards and the game board sections made of thick card stock. What little artwork there is focuses on the passageways that creates the twisting labyrinth of the tomb.

Getting Ready to Enter

To set up the game, first place the 4 game boards together to form 1 large square. Make sure all the sides facing up have the same letter (A or B). This is the tomb the players will be exploring. Side “A” is just a grid with no passageways. Players will have to build passageways using the Tile cards to enter the tomb and find treasure. Side “B” has predefined passageways, making the process of exploring faster.

Second, shuffle the Tile cards and the Treasure cards to form 2 different decks. Place each deck face-down near the game boards. Place the Mummy pawn next to the decks at this time.

Third, have each players select a Player pawn color of their choice. Each player places their Player pawn on one of the starting spaces so its “head” is pointing in the direction it will be traveling. The pawns are meeples. When placed, the meeple will be on its belly…or back, depending on how you want to look at it.

Fourth, deal each player 3 Tile cards. These cards go in the player’s hand.

That’s it for game set up. Time to explore the tomb!

The Tile cards have spaces on them the pawns will travel on, but some will also have an icon. 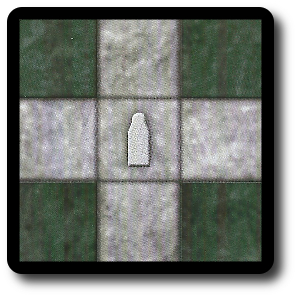 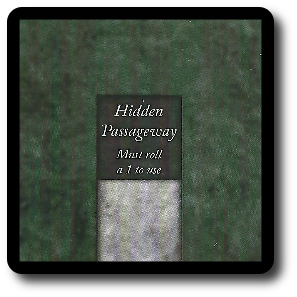 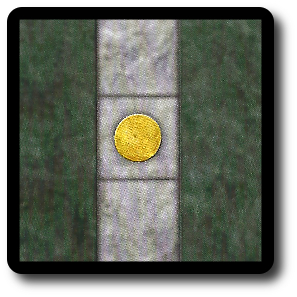 All That Glitters is Not Gold 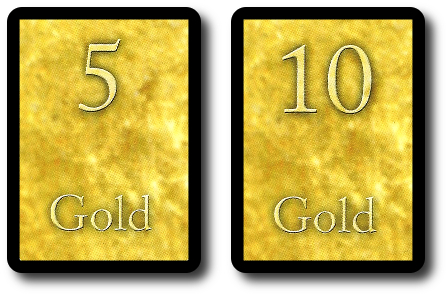 The “Treasure Thief” and “Gold Thief” Treasure cards allow the player to take cards from their opponents. The Treasure Thief gives the player an opportunity to take 1 card from the opponent’s hand, adding it to their own. The Gold Thief picks an opponent’s pocket where it counts. The opponent takes all their collected “Gold” Treasure cards collected so far and the player gets to pick 1 at random, adding it to their own Gold pile. 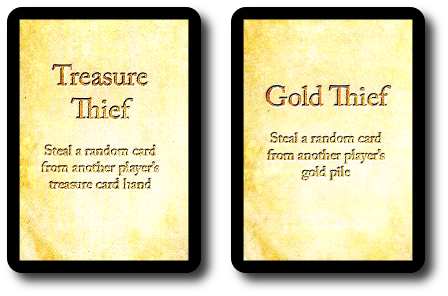 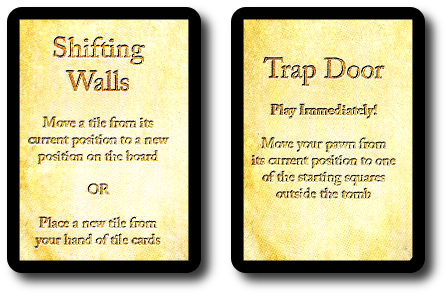 Treasure Tomb is played in turns with no set number of turns per game. On a player’s turn, they will take a single action. A player can also play 1 or more Treasure cards before they take their selected action. The actions available are as follows.

If a player should ever exit the tomb, the rest of their movement and their turn is over. On the player’s next turn, they can enter through any of the starting spaces.

After the player moves their pawn, their turn is over.

Curse of the Mummy!

The Mummy pawn can enter into play one of three different ways.

The Mummy pawn is placed on any treasure icon currently visible in the tomb. For the rest of the game, the Mummy will be moved between different treasure icons and the “Burial Chamber” Tile card (if it’s in play).

The Mummy is, essentially, a moving roadblock, but not one that cannot be overcome. Most of the time, a player cannot move past the Mummy pawn or collect a Treasure card from the treasure icon space the Mummy is standing on. A player can attempt to drive the Mummy away while moving by ending their movement next to the space adjacent to the Mummy pawn and then roll the six-sided die. If they roll a “6”, the Mummy pawn is moved to any other treasure icon of the player’s choice. The player then continues their movement. If the player fails to roll a “6”, their turn ends and they are penalized 5 Gold. A player cannot attempt to drive the Mummy away unless they have at least 5 gold to lose.

The game immediately ends when any player has collected a total of 50 or more Gold at the end of their turn. This player is a true tomb raider!

The majority of our players felt that the game was simply too long. A House Rule was introduced that reduced the required amount of Gold to win the game. For a shorter game, we suggest changing the total amount from 50 to 25. For an even shorter game, reduce to 15.

Th Child Geeks enjoyed the game for the most part. The rules are easy to follow and the objective is clear. What caused most of them to lose interest in the game was the amount of time it took to play it. On average, our games ended at about the 45 minute mark, which left the majority of Child Geeks feeling like the game was dragging. According to one Child Geek, “I like the game OK, but I think it takes too long.” Another Child Geek said, “The most frustrating part of this game is the movement. It takes me forever to get to treasure.” The Child Geeks learned that half of the game was about creating a route that had a lot of treasure on it and the second was traveling that route as fast as you could before the Mummy got in the way. As one Child Geek put it, “This game is like a race. You have to touch as many treasure icons as possible and hope you collect more gold than your opponents.” At the suggest of one of the Child Geeks, we reduced the necessary Gold to win from 50 to 25 with a House Rule. This reduced the length of the game, but none of the complexity or challenge. It also made the game much more tolerable. In the end, with the House Rule in play, the Child Geeks approved Treasure Tomb. 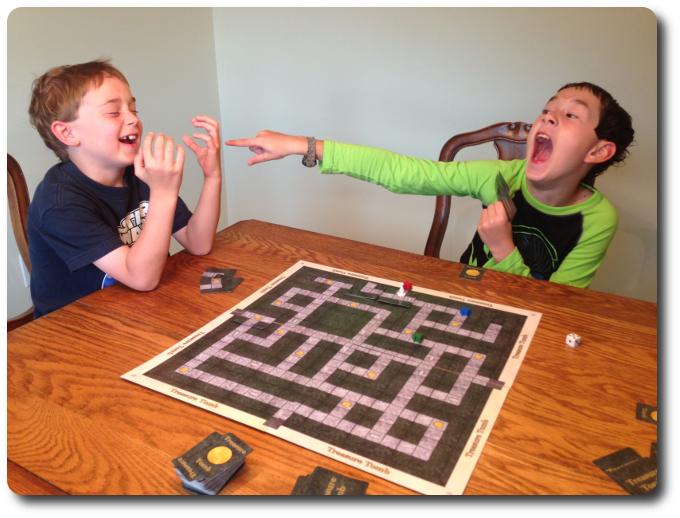 An older brother laughs, evilly, as he sends the Mummy to hamper his younger brother’s efforts

The Parent Geeks liked how the passageways were built, shifted, and how the tomb visually appeared before them while playing, but didn’t find the game play all that interesting. According to one Parent Geek, “I don’t feel like there is much to this game. The only aspect that is interesting is the building of the passageways, but the movement feels like it’s on rails. I only get to make a choice when I bump into something.” Another Parent Geek said, “No, I don’t care for it. Too random and too chaotic. If I change a passageway, an opponent can change it again before I even have a chance to travel on it.” Finally, another Parent Geek said, “I hate the Mummy. I hate it so much. It is nothing more than a way to make the game less fun.” All of the Parent Geeks thought the game was a good time for the Child Geeks, but didn’t consider Treasure Tomb to be a game they would be interested in playing again.

The Gamer Geeks really didn’t like the game. According to a rather upset Gamer Geek, “I hate roll and move games in general, but this game takes it to a new level. Not only do I have to roll to move, but I can’t decide in what direction or even change my direction while moving until I hit a wall. Kill me now.” Another, less dramatic, Gamer Geek said, “The problem I have with this game is that it pretends to give players the ability to make a meaningful choice when there really are none to be had. You can place a tile, but to one end? You can roll to move, but to what end? None, really. A player’s only goal is to collect treasure, but this simple goal is made unnecessarily complicated.” All the Gamer Geeks agreed, without hesitation, that Treasure Tomb was a game they would gladly never play again.

The Mummy in the game is a mixed bag. It really doesn’t do anything since players can just move around it. What it does do very well is slow players down, forcing them to play tiles when they might have attempted to move. In this way, an opponent could use the Mummy to force a player’s hand, but never to a point where it really made any difference. I wouldn’t go so far as to say that the Mummy felt unnecessary, but it didn’t have the kind of impact on the game play I was hoping for. It didn’t chase you and it didn’t curse you. All it did was appear, sit down, and say in a raspy voice, “I ain’t movin’!”. That’s pretty anticlimactic and all our players thought so, too.

The use of the tiles is a good one, but poorly implemented given the game component quality. The Tile cards kept moving off their piles when meeples were moved on them, the game boards kept sliding apart, and the players spent their down time reorienting everything to make it look right. Totally unnecessary. What this game needs to do is get a solid game board that is 1 piece instead of 4 and have the tiles mounted on thicker card stock. This would improve not only the game’s looks, but would also ensure the game pieces stay where they are placed by the players.

But it wouldn’t do anything for the game play.

Treasure Tomb is a game full of random outcomes. Nothing is set in stone and the game feels very chaotic. Players don’t have much in the way of choice and the single goal of the game is hampered by even more chaotic randomness. One cannot craft a strategy or use tactics to assist, but one can use logical and critical thinking. Not much, but it’s necessary. For the younger and less experienced players, Treasure Tomb will quickly demonstrate that the only good plan is to not have one. You need to roll with the punches, adjust to ever-shifting circumstances, and not take the game seriously. If you can do that, then Treasure Tomb should be an enjoyable time. If you prefer a game a bit more grounded, then avoid entering this tomb.