Please Take Note: This review of the final game might change slightly based on the success of the Kickstarter campaign. The game is being reviewed on the components and the rules provided with the understanding that “what you see is not what you might get” when the game is published. If you like what you read and want to learn more, we encourage you to visit the game publisher’s website or visit the Kickstarter campaign. Now that we have all that disclaimer junk out of the way, on with the review. 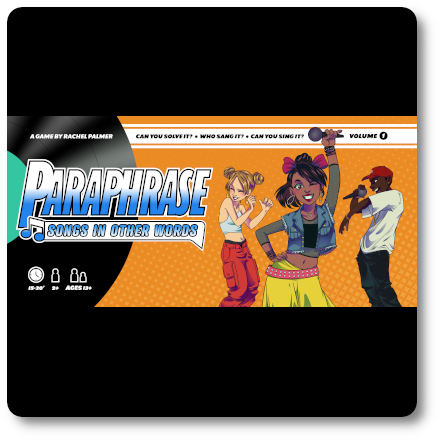 To paraphrase is to use different words to express a previously written or communicated idea or body of work. Sometimes these paraphrases let others say something in a way that is more relevant to their audience, or they can be used to provide insightful wit. In all cases, paraphrases come down to disguising something already well defined or named in a cloak of thick ambiguity. In this game, players will be challenged to take the paraphrase and deduce the actual title of a song. Extra points if you can sing it, too!

Paraphrase: Song, in Other Words, designed by Rachel Palmer and to be published by Flatworks Gaming, will reportedly be comprised of 213 Paraphrase cards, five Scoring cards, and two Scoring and Game Reference cards. As this is a review based on a prepublished version of the game, I cannot comment on the game component quality. A piece of paper and a pen or pencil to record game scores are not included with the game, but this is optional. Nor is there a timer provided, meaning players will need to provide their own timing device.

First, divide the players into two different teams. It helps if the teams are well balanced, both by age and number of players, but it is mainly left up to the players of the game to determine how best to organize themselves. Give one player per team a Reference card.

Second, decide which team will go first using whatever method is available. There’s no advantage to going first or second, but don’t let that stop you from being pushy about it.

Third, take the five Scoring cards and place them in a row in the middle of the playing area. The Scoring cards should be placed in sequential order with Score card “One” on the far left, followed by card “Two,” and so on, going from left to right.

Fourth, shuffle the Paraphrase cards and place them down in one big stack face-down in the middle of the playing area. This is the draw deck for the duration of the game.

That’s it for game setup. Before you begin, decide how many rounds will be played as a group. It’s recommended that an odd number of rounds be played. Each round takes about five minutes to complete. Longer if the players in your group like to visit a lot. Then again, that’s not really up to the game, is it, Mr. Chatterbox?

Paraphrase is played in rounds – specifically, the total number of rounds agreed to during game setup – and timed turns. During a team’s turn, they will draw five Paraphrase cards. Then, when they are ready to start, a member of the opposing team starts the timer, giving the team 90 seconds to guess as many cards as possible.

The objective here is to guess the song’s name given the first clue that uses different words that cleverly paraphrase the title. If the players on the team need a hint, two are available. They may ask for them if they like, but doing so reduces the number of points the team can earn. In addition, players can earn bonus points if they name the artist or band, as well as bonus points for singing the song. Not the whole song, mind you, as the team only has 90 seconds. 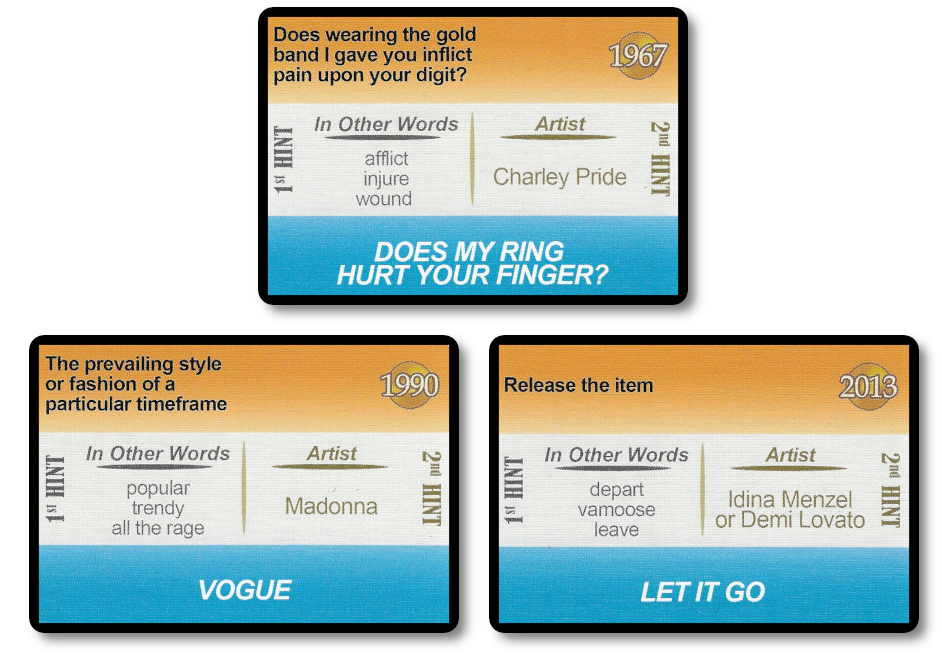 Players may “skip” the current Pharaphrase card, sending it to the back of the cards to be played this round, but only if they haven’t guessed or taken a hint. The Paraphrase card must be scored as soon as the players do either.

To score a card, the players must – at a minimum – guess the song’s title correctly. Points are then earned as follows:

Teams lose points for the following:

No points are lost (or earned) if the Paraphrase card is discarded.

Once the 90 seconds are up (or all five cards have been guessed), the players count the points earned by multiplying the number of Paraphrase cards under each Scoring card. For example, if the team had the following cards under the Scoring cards listed here, they would have earned 13 points for the round.

The game ends after the last team’s turn of the final round. Players determine their team’s total points and announce their score. The team with the highest score wins the game. A head-to-head bonus round is declared in the rare case of a tie. Each team selects one player to represent them. A new Paraphrase card is drawn, and the two selected players must try to guess the song’s title. No hints are provided! The first player to guess correctly wins the game for their team.

While Paraphrase is designed to be a party game with a group, it can be played quickly enough with only two players. To do so, have one player read the Paraphrase card for the other and score accordingly. Likewise, if you have a large group, consider dividing them into teams as evenly as possible and select one player as the official card reader and keeper of the scores.

Those looking to add even more competition to the game should consider using the scoring variant that awards the opposite team one point if a Paraphrase card is skipped.

To learn more bout Paraphrase: Songs in Other Words, visit the game’s webpage or visit the Kickstarter campaign.

The Child Geeks enjoyed participating but didn’t enjoy the game. Songs covered time spans from the ’60s through the 2010’s, meaning most of the songs the Child Geeks will be asked to know are either only on the car radio or played by their parents and older siblings. Simply put, the Child Geeks didn’t know the songs. This, as you can imagine, left them feeling left out. According to one Child Geek, “I liked how excited my parents and the other adults were getting, and I liked being on the winning team, but I didn’t do anything.” Another Child Geek said, “I had no idea there were so many songs that I didn’t know or care about.” When the last song was sung, the Child Geeks voted and decided that Paraphrase was not a game they found pleasing to the ear.

The Parent Geeks were precisely the opposite. They enjoyed the game considerably, as did the much older Child Geeks who pay attention to music. They found the game to be engaging and exciting right from the start. According to one Parent Geek, “I liked the game. It gives you the answer right from the start, but you must play with the words in your head to get the title. So even if you don’t know the song, you still have a chance to guess it correctly.” Another Parent Geek said, “Like all trivia games, it’s about what you know, not how well you play. I’m glad I was with a group that listened to music a lot; otherwise, I wouldn’t feel as warmly towards this game as I do now.” The Parent Geeks took a vote and decided that Paraphrase: Songs in Other Words was a good deal of fun with a group, giving it their full approval.

The Gamer Geeks found the game to be OK but not great. According to one Gamer Geek, “I found how they paraphrased the song’s title to be clever, but probably something you could do with a thesaurus. It gets down to knowing song titles from the decade the card covers. If you don’t know song titles, you will hate this game. I do know song titles, and I only found the game to be OK at best. Fun with the right group, but it’s the group making the game interesting, in my opinion.” Another Gamer Geek said, “Pretty standard stuff when it comes to trivia games with a creative twist to how the clues are given to players. I enjoyed it and think this is one of those trivia games that will do well with folks who love music. For everyone else, they’ll be scratching their head a lot.” When the game was scored and put away, the Gamer Geeks took a vote, and the results revealed a mixed level of endorsement from our gaming elitists.

Paraphrase: Songs in Other Words suffers and benefits from everything that comes with a trivia game. If you don’t know the subject well, you spend all your time guessing out loud or staying quiet, hoping that someone else will get the answer. This can be fun for folks who enjoy games where everyone works together and fills in the knowledge gaps as a group. But, as revealed by our comments collected from our players, the game fell flat for others.

The solution here is to know your audience. This game is perfect for groups of friends who might or might not be family. I think more like office gatherings (offline or online), meeting folks at your local pub, or next picnic gathering. It’s lightweight, easy to put on the table (or ground), and requires nothing more than an enthusiastic group of folks who think they know enough about music to make it worth their while.

If you have friends who know their music, constantly quoting lyrics and making references to songs, then Paraphrase: Songs in Other Words is a game designed from the ground up to be an absolute joy. You don’t have to be a music lover to enjoy the game. The only thing you need to play the game and enjoy it’s the love of playing with friends and family. If you want to win, you’ll need more than just luck and family. You’ll need to know your tunes. Give this game a try and see if it’s music to your ears.