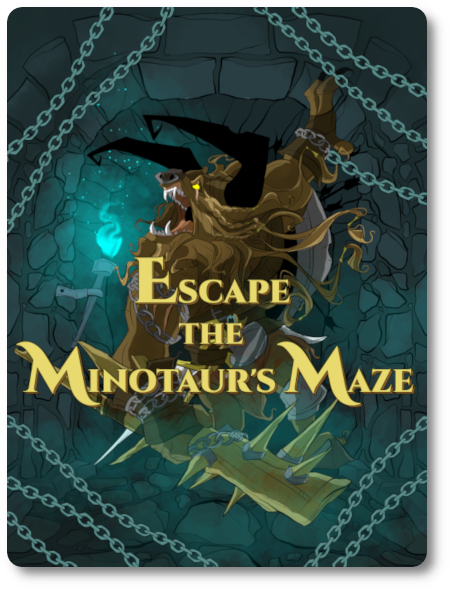 Former American football tight end who played in the National Football League (NFL), Martellus Bennett, said, “Any time you’re in a maze, there are multiple ways to get to the end.” And in this game, that is true. You have two ways to exit, one of which is death. Alternatively, you can live, but you’ll need to navigate and explore an ever-shifting maze as a monstrous minotaur hunts you down. To survive, you must use the maze to your advantage and outwit your opponents. This is one puzzle that’ll challenge you to the very end. 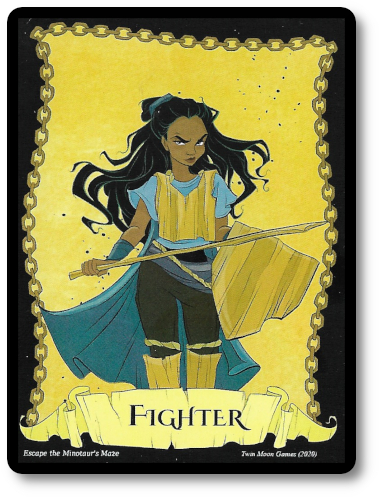 The “Basic” Characters are all kids, which is very cute

Second, find and set aside one Starting Location card per Player. Any not used should be returned to the game box.

Third, shuffle the Dungeon Maze cards and place the Exit card in the middle of the playing area.

Now draw cards from the Dungeon Maze stack and place them face-down around the Exit card to form a grid of cards. The Exit card should always be in the center when creating the grid.

A Game of Minotaur and Mouse

Escape the Minotaur’s Maze is played in turns and rounds with no set number of rounds per game. A player’s turn is comprised of specific steps completed in sequential order. Each of the steps is summarized here.

Note: The gameplay described here is for the Basic game. The Advanced game gives players more options during their turns.

The players skip this step if no adjacent Dungeon Maze cards are connected via a drawn path.

This action allows the Player to replace any face-up Dungeon Maze card with any card from their hand. The one exception to this rule is that the Player cannot replace the Exit card, the Starting Location cards, or any Dungeon Maze card currently occupied by a meeple. Once the card is replaced, ensure its orientation is such that the compass rose is pointing North.

The replaced Dungeon Maze card is placed in the discard pile.

This action allows the player to discard one Dungeon Maze card in their hand, placing it in the discard pile.

The opponent to the Player’s right (or the next player in the turn order sequence) now rolls the four-sided die. The die result determines the direction in which the Minotaur meeple moves.

The Minotaur meeple continues to move one Dungeon Maze card at a time, with the player rolling each time before moving until one of the following conditions occur:

If playing the Basic version of the game, the Minotaur meeple will not move until the players explore and reveal the four adjacent Dungeon Maze cards.

If a player is unlucky enough for the Minotaur to move onto the same Dungeon Maze card as their Player meeple, they are considered “caught.” Three things immediately occur, all of which can be done by swearing under one’s breath if the player is in the mood to do so.

It’s important to note that any Player meeple on the Exit card when the Minotaur meeple is placed there is also considered “caught.”

There are two ways to win the game.

The Basic game is just that: basic. Very straightforward in its execution and resolution of the Player’s actions. The Advanced gameplay is available and suggested for those who want a bit more to think about and more control. In the Advanced game, Player Characters have special abilities, can attack and defend, must find hidden Chalices to escape, and must avoid a smarter Minotaur who knows how to open doors and explore previously unexplored Dungeon Maze cards.

Even better, each Advanced Character card has a special attack and defense. These are very useful and powerful but also very limited in use. They are perfect tools for survival, but they have their limits which is based on the number of Stamina tokens. Nevertheless, it opens up a new level of play in the game, making it all the more exciting and challenging to play. 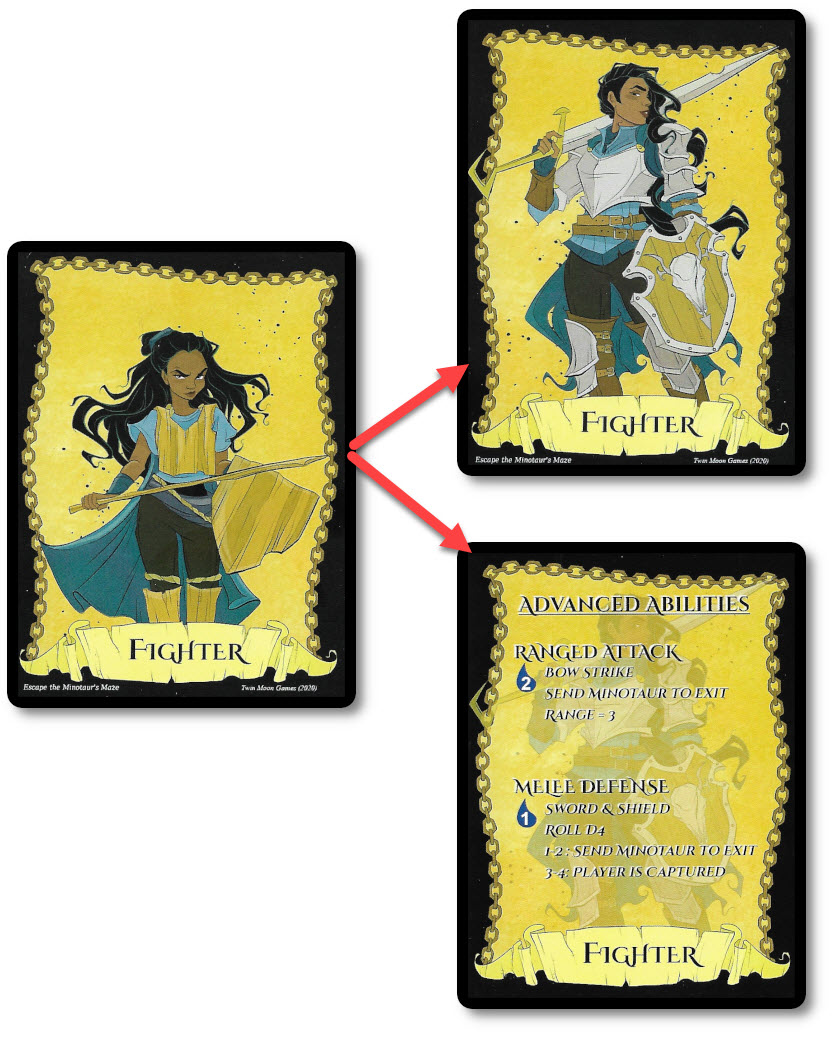 The “Advanced” Characters are the adult version of the Basic kids – a nice artistic touch!

To learn more about Escape the Minotaur’s Maze, visit the game’s webpage or the publisher’s website.

The Child Geeks enjoyed the game, finding it fun and exciting to explore a maze and avoid the “big monster meeple” lurking in the same corridors as the ones they traveled. They discovered their movement through the maze to be easy to manage but felt like the Minotaur’s movement took too long, especially during the start of the game. According to one Child Geek, “I liked the game and the Advanced game more than the Basic game. I thought the Minotaur movement was much longer than my turn each time but was fun to do when a player got close to the Exit.” Another Child Geek said, “I liked the game, and I liked how the characters were both boys or girls. I always play the girls because they are better than the boys (looks at her brother).” All the Child Geeks voted to approve Escape the Minotaur’s Maze when the votes came in.

The Parent Geeks found the Basic game to be way too basic and agreed that the only way to have fun with the game was with the Advanced gameplay. According to one Parent Geek, “I liked the game. Easy to learn and easy to play. I found the Basic gameplay a great way to teach the game, but if you want to have fun playing the game, you need to use the Advanced rules. Much more interesting game.” Another Parent Geek said, “Moving the Minotaur around can feel a bit cumbersome at times, but becomes very important to you if you want to win the game by eliminating other players or harassing them to a point where they are running around the Exit instead of going right to it. But, of course, opponents  can do the same to you, so the Minotaur remains an interesting and annoying tool for me.” When the last Parent Geeks all escaped the Dungeon, they looked back, reflected, and gave the game their vote for approval.

The Gamer Geeks enjoyed the game’s concept but not the execution. According to one Gamer Geek, “The Minotaur movement is a mess. At first, the Minotaur moves slowly, but as the game opens up, the Minotaur’s movement takes longer than a player’s movement. I don’t think that is right and feels wrong.” But not all the Gamer Geeks agreed. According to one Gamer Geek, “What we have here is a pretty basic game, even if you are playing with the advanced rules. The Minotaur is an essential component of the gameplay, as it allows players to interact with each other in a way that is both semi-cooperative and downright aggressive. Still, the game wasn’t for me, and I felt like it took too long. I’m happy I played it but won’t be looking for it soon.” When the Minotaur was put back in its cage, the Gamer Geeks rejected Escape the Minotaur’s Maze.

This was an entertaining game full of exploration and hunting. Like many who played it before, with, and after me, I enjoyed the advanced gameplay much more than the basic. The Advanced game gives players more tools to use without adding weight. The result is a deeper game that felt more rewarding.

I agree with many that the Minotaur movement is a bit of a mess at first. Easy to resolve, but weirdly either too quick or too long. Of course, this only occurs at the very first of the game or towards the end. For example, one player spent almost two minutes moving the Minotaur around the maze due to dice rolls and eventually landed on the Exit card to kill the Player. This would seem a great way to create excitement and a level of unknown danger, which it did. More often than not, however, it becomes a role-and-move exercise. Which isn’t that entertaining but remains an essential part of the game.

The only aspect of the gameplay that I did not enjoy was the Basic version of the game and the Minotaur movement. Based on the current rules, the Minotaur will simply not move for an extended period of gameplay. This is due to the Minotaur’s inability to pass through new Dungeon Maze cards. Essentially, the Minotaur isn’t a threat until a player opens the maze to the Minotaur, which is what the player is forced to do to get to the center. And as soon as they do, the Minotaur catches them. Not the tasty proverbial carrot that should entice players to race to the maze’s center.

What was not overly discussed by our players but is worth mentioning is the importance of manipulating the dungeon through cards. This allows the players to shift the rooms around their opponents and the Minotaur, opening up new avenues to the juicy center of the dungeon maze but also creating new twists and turns for their opponents to get lost in. A neat little addition gives players – regardless of playing the Basic or Advanced game – a level of game manipulation that creates some very interesting strategies.

Try this “hide and seek” game in a dungeon maze full of shifting twists and turns. It has its charm and was enjoyed by many of our players. Just avoid that Minotaur at all costs, as it likes to cheat.