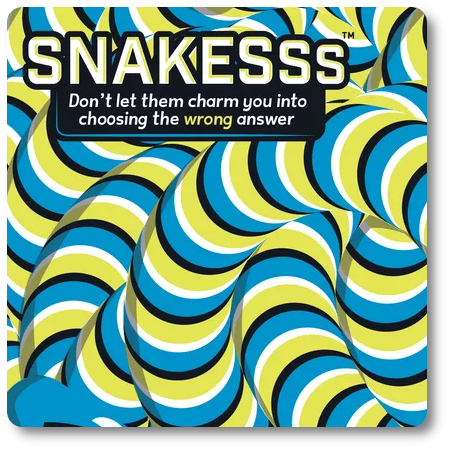 To call someone a “snake” is to suggest they are underhanded and being deceitful. A person who is a “snake in the grass” is even worse. Not only are they deceitful, but they are doing so with the intent of harming you in some way. In this game, the grass is high, and there be snakes hidden at your ankles. But worry not, as a helpful mongoose has your back. The trick, however, is knowing a friend from foe. Trust who you will, but never doubt that some have forked tongues.

Snakesss, designed by Phil Walker-Harding and published by Big Potato Games, is comprised of 120 Question cards, eight Character tokens, one Mongoose of Truth wooden figure, eight sets of Answer tokens, and one scoresheet pad. Not included is a pen or pencil to write with and a time tracking device. The component quality is excellent with thick cardboard tokens and standard playing card durability. The mongoose is a big wooden figure which is fun to pass around.

To set up the game, first take one scoresheet and write each player’s name down. The order in which the names are listed is not relevant.

Second, give each player a set of Answer chips.

Snakes in the Grass

Snakesss is played in six rounds. A game round is summarized here.

Step One: Shuffle Those Tokens

Shuffle the Character tokens and deal one to each player, face-down. Players should look at their tokens but keep them hidden from the other players. Unless you were dealt the “Mongoose of Truth.” If you were, reveal it now and proudly proclaim you are the mongoose. Immediately be awarded the “Mongoose of Truth” wooden figurine, lovingly displaying it in front of you.

Being the mongoose doesn’t give the player any special powers, abilities, rights, or privileges. It does, however, let all the players who are “Ordinary Humans” know that you can be trusted. Trust goes a long way in this game…

The Moderator now reads the top Question card, places it in front of them, making sure not to show the answers on the back to anyone, including themselves. The Character chip owned by the Moderator will not conflict with this action. Once read, it’s placed in the middle of the playing area so everyone can see it. 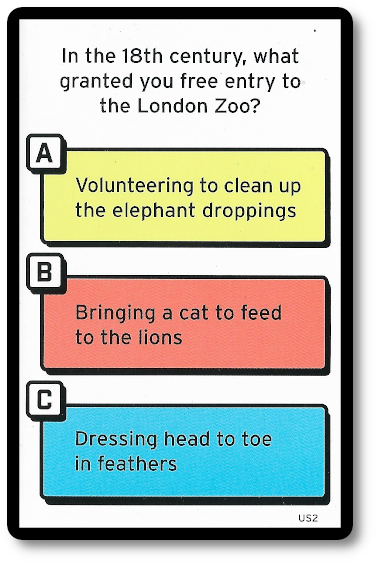 Step Three: The Snakes Have Eyes 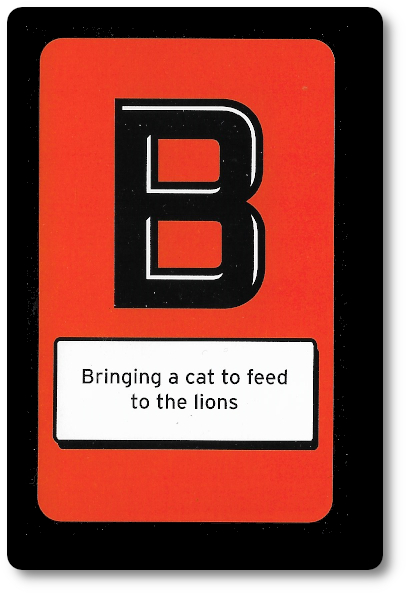 After about five or so seconds, the Moderator then flips the Question card back to its original side. After doing so, the Moderator asks everyone to open their eyes again. Feel free to look around suspiciously at the other players… One or more people at the table are Snakes. They know who they are, but you don’t unless you are a Snake, of course.

Using a stopwatch or any other mechanism that can keep track of time, the Moderator announces that everyone can debate their opinion of what the answer is for approximately two minutes. This is a free-for-all activity. Speak as passionately as you like, banging the table, throwing your hands in the air, and rolling your eyes so hard you feel it in the back of your skull.

Among the “Ordinary Humans,” there are “Snakes” whose only purpose this round is to ensure everyone is tricked into choosing the wrong answer. But don’t worry, the “Mongoose of Truth” is the one player in the crowd you can trust. They want you to know they want to get the right answer and will work hard to get it.

Trust in the mongoose.

After the time to debate has passed, all players must now vote on one of the answers. This is done by each player taking an Answer chip, selecting the chip that matches the answer they want to vote for, and placing it face-down so no one can see its value. For example, “Ordinary Humans” and the “Mongoose” will use the “A,” “B,” and “C” chips. “Snakes” will only and always use the “Snake” chip.

Points are awarded to players based on their current Character token and their Answer chip in relationship to the correct answer to the Question card.

Points earned are recorded on the scoresheet.

The game continues until the sixth and final round is completed. Then, the Moderator totals the points earned by each player and announces the winner, who is the player who earned the most points during the game. If there is a tie, the game rules suggest Rock-Paper-Scissors, but we all know that the only true way to settle a score is Thunderdome.

To learn more about Snakesss, visit the game’s webpage.

The Child Geeks had fun, despite not knowing all the answers. The group activity focused on discussing the right answer and determining who were the snakes was a lot of fun for them. According to one Child Geek, “I didn’t know a lot of the answers, but I was able to get help from others before I voted. The fun part was trying to figure out who was trying to help me and who wasn’t.” The same went when the Child Geeks were the snakes, too. As one Child Geek put it, “The game reminded me a lot of Are You A Werewolf? and trying to trick others. I had a lot of fun and even learned something when I played. This made my mom really happy.” When all the votes were in, both Ordinary Human Child Geeks and Snake Child Geeks agreed that the right answer was giving Snakesss their full approval.

The Parent Geeks also had a lot of fun, finding what would normally be considered a “dull game” engaging and lively. According to one Parent Geek, “I don’t like trivia games with the family and seldomly with friends. You win because you know more about random facts that I have no time to remember or care about. This game, however, made the whole process of guessing trivia to be a lot of fun. The social deduction and bluffing really made the game pop!” Another Parent Geek said, “This game plays great even with my kids and know-it-all inlaws. Knowing the answers helps, but where the real fun can be found is tricking others, finding out who is trying to trick you, and then revealing who is who. I really enjoyed it.” The Parent Geeks didn’t need to debate their vote when it came time to collect their thoughts. They unanimously agreed that Snakesss was a trivia game they would gladly play again.

When it came time to play Snakesss with the Gamer Geeks, it became a real chore. Gaming elitists tend to stay away from trivia games since they seldom have any tactics or strategy to speak of. You either know the answer, or you don’t. You win the game based on your knowledge and not much else. The Gamer Geeks came around, though, when they started to understand that Snakesss was less about what you know about the question and more about what you know about the people you are playing the game with. According to one Gamer Geek, “This game takes the overly done and played out “trivia” trope and turns it on its head. It’s like Werewolf and Trivial Pursuit had given birth to a forsaken lovechild, and this game was the result. The kick is the baby is far from ugly. I had a lot of fun talking bull with my friends and tricking them, as well as calling them liars. I had a blast.” Another Gamer Geek said, “I didn’t think I would enjoy the game as much as I did. In fact, I was pretty sure I was going to hate it. I was wrong. This is the most fun I’ve had with a trivia game in a long, long, long time.” When the snakes were put away, the Gamer Geeks agreed that the game was well worth their time.

I am a big fan of social deduction and bluffing games. I have always liked the “game within the game,” wherein I’m trying to Sherlock Holmes the crap out of who is who and how I can take advantage of what I know … or think I know. I get so wrapped up in trying to figure out hidden motives that the game becomes much more deep and rememberable as a result. Which, I would argue, is due to a large amount of player interaction and thinking you have to do. It’s not just about beating the game; it’s about beating the player who thinks they can trick you. Or, better yet, tricking others and winning the game.

Snakesss is, I would argue, first and foremost a social deduction and bluffing game with trivia thrown in to provide the glue that keeps it all together. It works very well, setting the stage with something as benign as knowing a “thing” and then makes knowledge a tool and weapon. Knowledge is needed to win, but not in the academic sense. Knowing numbers and facts is helpful, but what you really need to win is a sharp ear and a quick wit. This game is played in your head as you deduce what is being said by whom and when.

The three different roles add a lot to the game. The mongoose is a really nice touch, always making sure the players know exactly who to listen to or, if you are a snake, contradict. The Ordinary Humans in the game are tempest-tossed between the proverbial angel and demon on their shoulders, both whispering in their ears. It can be a bit maddening at times and often leads to players deciding that no one can be trusted except themselves.

Then it comes time to the vote, and all is revealed. I, personally, learned more about the players I was with and not so many new and interesting facts. Although I think we can all agreed that 18th century London should be avoided when time travel becomes a thing. The result is a game I really enjoyed and look forward to playing again as soon as possible. It was a blast.

Do give Snakesss a try when the opportunity permits. I believe you’ll find the game to be engaging, enriching, and, best of all, entertaining. And that’s no lie.