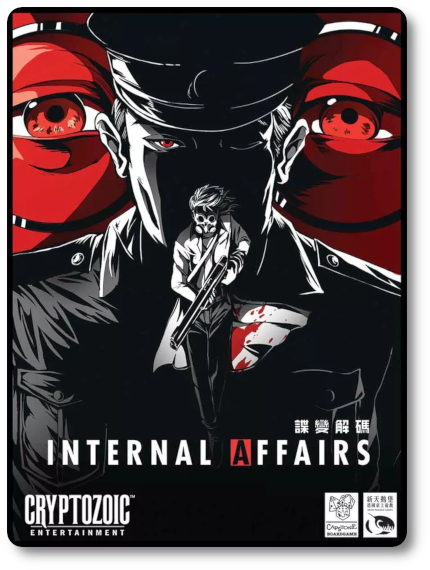 Hong Kong and the streets are owned by two factions: The Triad and the Police. You were always raised to show loyalty to your leaders. But what if your leaders weren’t showing loyalty to you? Being loyal is more than just following orders. You have to believe, and belief is hard to come by when there are turmoil and deception in the ranks. You need to survive, and to do so, you have to be smart and adapt. But be careful. No one knows who will come out on top until the end, and it’s always better to be on the winning side.

Internal Affairs, designed by Edward Chan, Dark Chan, Zero Cheung, and published by Cryptozoic Entertainment, is comprised of 26 Identify cards, 45 Code cards, 28 Action cards, and eight Player Reference cards for a total of 107 cards. The cards are as thick and as durable as your standard playing card. Illustrations by Tommy Ng are stylized and minimal, focusing more on the story being told through the players’ gameplay rather than anything on the cards.

Prepping for the Mission

To set up the game, first set aside the right number and type of ID cards per the number of players. For example, there will be eight “Police Mole” and eight “Triad Mole” ID cards in a game of five players. Shuffle the ID cards used and deal three to each player, face-down. Any remaining ID cards are returned to the game box. 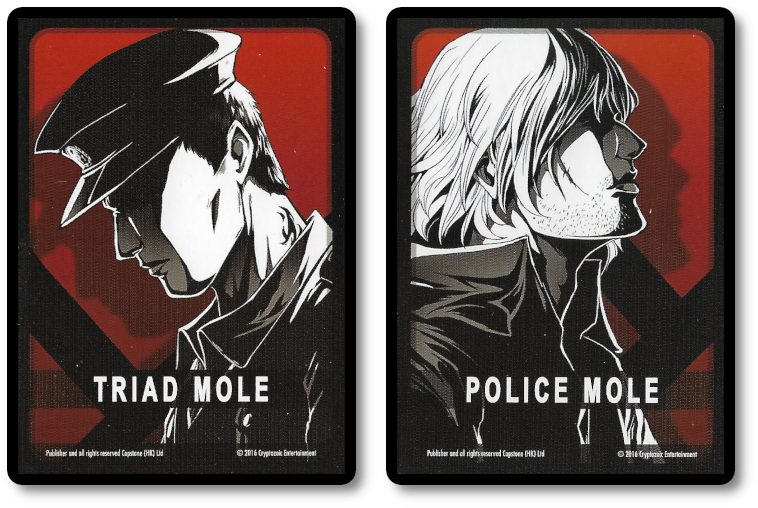 Internal Affairs is played in turns with no set number of turns per game. A player’s turn is summarized here.

Phase One: Take One Action

A player has four actions to choose from.

The player selects one Code card from their hand and passes it to an opponent. The opponent must now play it to their row of Code cards, face-up, ensuring that the card is correctly placed to maintaining the ascending sequence. For example, if the “9” Code card was passed and you had “5”, “5”, and “11”, you would place the “9” Code card face-up between the “5” and the “11”.

Only one Action card can be played at this time. They are as follows:

Any player who exchanged ID cards should take a moment to review the current ID cards they have in their possession as their allegiance might have switched. Again, the side on which the player is on is determined by the majority of ID cards. As the game progresses, a player can switch several times. A player must always know on which side they are on to play correctly.

The player selects one opponent and randomly gets to look at one of their face-down ID cards.

The player selects one card from their hand and discards it. This action can only be taken if the player has cards to discard.

The player may now, optionally, attempt to guess an opponent’s code. While the entire code string is not visible, it’s always understood that the values are in ascending order from the player’s perspective who owns that code. The player points to one of the opponent’s currently face-down Code cards and announces its value.

If the active player played the “Enquiry” Action card during Phase One of their turn, they still get to guess. The only difference is that they were able to guess twice instead of the default once per turn.

The player now draws back up to four cards in their hand. This can be a mix of any Action and Code cards as long as the total number of cards in their hand does not exceed four. Do not reshuffle the discard piles if the draw decks are depleted.

This completes the player’s turn. The next player in turn order sequence now takes their turn starting with phase one noted above.

The game continues as noted above until two players have been forced to reveal all three ID cards that identify them as being on the same side. The opposite side (and those players who belong to it) win the game. For example, if two players in a five-player game have a majority of “Police Mole” ID cards visible, all the players who are members of the “Triad Mole” win the game.

To learn more about Internal Affairs, visit the game’s webpage.

The Child Geeks enjoyed the game but had difficulty understanding the need to shift ID cards around and manage their opponent’s Code cards. According to one Child Geek, “The first time I played, I didn’t do enough to keep track of how the other players were changing cards. If you are smart, you will notice that players shift pretty quickly when loyalties are revealed.” Very smart. The first game was a bit rough for the Child Geeks, but they learned quickly, and all subsequent games were much smoother. As one Child Geek put it, “The game isn’t hard once you understand that you need to keep changing whose side you are on, even until the very end. I liked it!” When all the votes were in and identities revealed, all the Child Geeks voted to approve Internal Affairs.

The Parent Geeks also enjoyed the game and found it a good deal of fun to include table talk while playing. According to one Parent Geek, “The game is all about managing how others perceive you, which in turn will influence how they manage their own identities. This is best done by talking loudly at the table and telling others you know their identity. Of course, you don’t, but you need to play the minds of your opponent’s as well as your cards.” Well…wow…and that came from a mom of three kids. Parenting gives you lots, and lots, and lots of skills, folks. Another Parent Geek said, “I dearly love Werewolf and miss having played it this year due to the pandemic. This game gave me a taste of the fun that comes from hiding in plain sight and engaging others in the art of subterfuge. I really enjoyed it.” When all the games were over and loyalties clear, the Parent Geeks gave their loyalty and love to Internal Affairs.

The Gamer Geeks were not as enthralled by the game but found it entertaining all the same. According to one Gamer Geek, “I enjoy deduction and code-cracking games. This one scratched my itch for small groups, and I think it funny that there is a semi-cooperative element to the gameplay. It would be best if you kept your friends close and your enemies super visible. Fun, and I would play it again.” Another Gamer Geek said, “A bit formulaic, but I don’t know how you could avoid doing that. The game becomes more complicated as it progresses, but I would argue that the additional information creates smarter guesses. The only downside of this game is that you need to play with brilliant players. That’s what makes it fun. Play it with those who don’t understand or are not trying, and the game falls apart.” Which is true for pretty much any game, I suppose, but one thing was for certain. Each game brought a smile to the gaming elitists’ faces, resulting in their full approval for Internal Affairs.

While not explicitly stated in the game rules or anywhere on the game packaging, Internal Affairs is based on the movie of the same name. In both the movie and the game, hiding one’s agenda is a matter of utmost importance. But one cannot remain hidden forever. Like the movie, the game plays with the idea of the constant need – and stress – of pretending to be one thing on the outside and possibly something different on the inside. This was not lost on any of our players and made for many fun moments at the gaming tables, including players standing up and directly accusing others of being the “mole.” Good stuff.

Gameplay-wise, Internal Affairs is pretty smooth. The constant shifting of the cards is necessary and plays well on the game’s thematic elements. What is not overly obvious – at first – is the need to explore, reveal, but then protect. As the game progresses, players will be forced to reveal their ID cards, making it difficult for them to shift which side they are on. Eventually, players will find that they are most strongly aligned with one side or another and will need to help each other if they want to win. This mid to late game shift to a semi-cooperative not only plays great but feels great, too. The excitement builds, as does the need to reveal your opponent quickly. Essentially, the game goes from “hide and seek” to “save your ass.” Excellent stuff.

I highly recommend Internal Affairs to all. It’s a pretty good game, plays fast, plays smart, and always delivered. There are many code-breaking and hidden role games on the market make it difficult – and impossible – to clearly identify a winner. That said, I don’t believe you’ll be disappointed with Internal Affairs and will find it to be an entertaining experience with your own friends and family. Give it a shot.