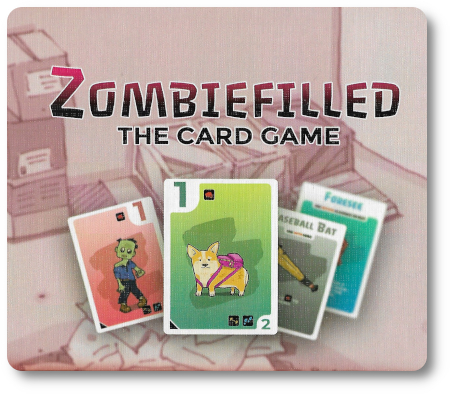 Your morning started like any other workday—Coffee, toast, something on the radio about the undead. You shuffle to your car, absent-mindedly throw it into the drive, and make your way to the warehouse where you work. Once you arrive, you punch in and get busy organizing the many boxes to be shipped. Then you notice that a few of your peers are moving a bit slower than normal this morning. You shake yourself awake and realize that Zombies surround you! They must have shuffled into the warehouse overnight! Well, this certainly makes work more interesting.

Zombiefilled, designed and to be self-published by Julven Sosing, Arlyn Sosing, and Jeff Sosing, will reportedly be comprised of 60 cards. As this is a review of a prepublished game, I cannot comment on the game component quality.

Showing Up to Work

To set up the game, first find and set aside the “Exit!” Action card and the four Hero cards with a power value of three. If playing with three or four players, additional Hero cards will be removed.

Second, shuffle the set-aside Hero cards and deal one to each player, face-down. Shuffle any remaining Hero cards back into the deck.

Third, deal to each player three cards. If any player is dealt a Zombie card, place it back to the deck’s bottom and draw a new card. Continue to do this until each player has four cards in their hand that are not Zombie cards. Do not shuffle the deck.

Fourth, place the “Exit!” Action card at the bottom of the deck and then place the deck face-down in the middle of the playing area. This is the draw deck for the duration of the game. Leave room for a discard pile.

That’s it for the game set up. To determine who should go first, each player looks at the Hero cards they have in their hand. The player with the fastest Hero card of a power value of 3 goes first.

The Pros and Cons of Working During a Zombie Apocalypse

Zombiefilled is played in turns with no set number of turns per game. A player’s turn is summarized here.

Action cards give the player a one-time opportunity to activate a unique ability defined by the card. These include looking at cards in the draw deck, drawing additional cards, moving cards, canceling card and player actions, adjusting turn order, and stealing cards. When an Action card is played, it’s placed in the discard pile and resolved. There is an opportunity for opponents to cancel the Action card. 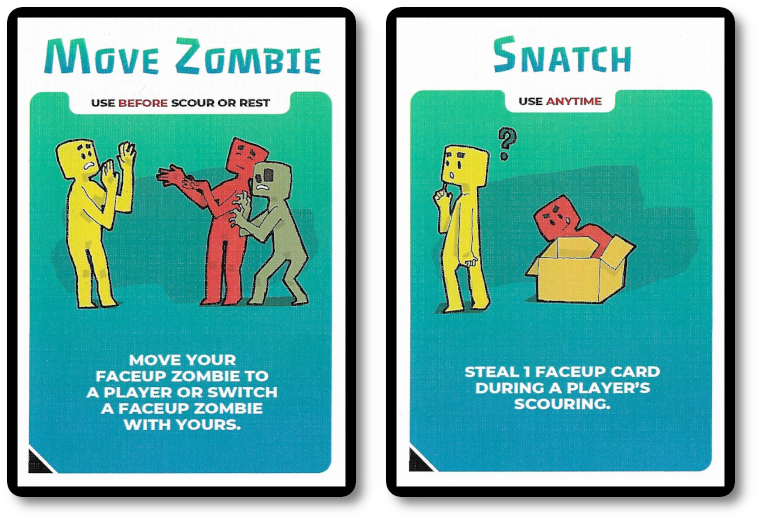 Again, there is no limit to the number of Action cards the player can play at the start of their turn, but the order in which they are played is important as each is resolved before a new Action card can be played.

After playing Action cards, the player must announce if they will “Scour” or “Rest” on their turn.

If the player announces they will Scour for their turn, they will be drawing cards. The player will draw one card at a time from the draw deck for a total of three cards. Once the card is drawn, they place it face-up next to the draw deck, but not in the discard pile. 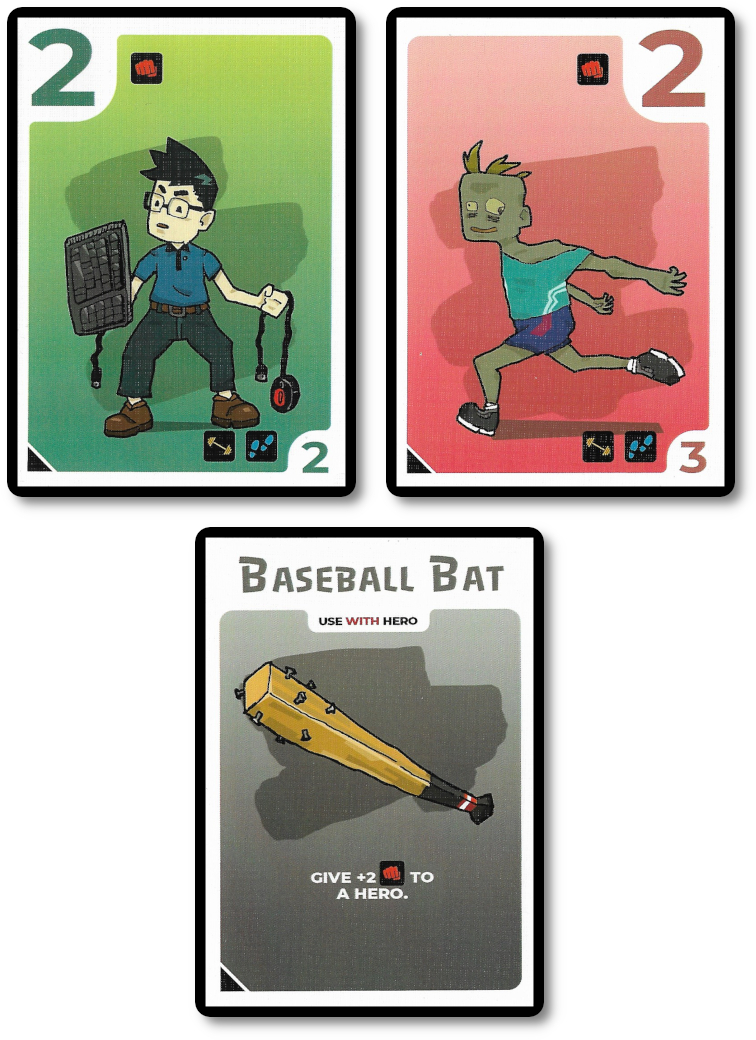 If the player can defeat any Zombie they drew or drew no Zombie cards, they now collect any face-up cards and put them in their hand.

If a player draws a Zombie card and cannot defeat it, they have lost the game. Any cards they drew up to that point and any cards in their hand are placed at the draw deck’s bottom.

If the player announces they will Rest for their turn, they will draw one card from the draw deck. If the card is an Item, Hero, or Action, it’s placed in their hand. If the player draws a  Zombie card, they place it face-up in front of any player who does not have a Zombie card currently in front of them. This includes the player.

Each player can only have one Zombie card face-up in front of them. If the player cannot place the Zombie in front of a player per this limitation, they have lost the game, and any cards in their hand are placed at the bottom of the draw deck.

Walking Out on the Job 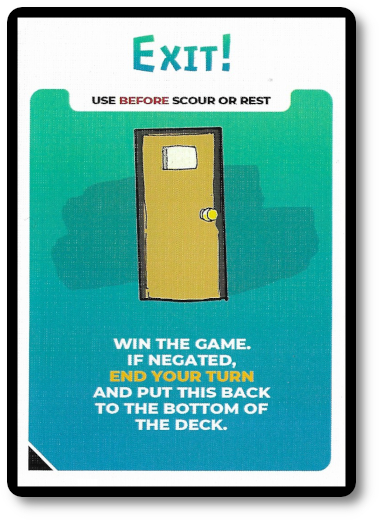 To learn more about Zombiefilled, visit the game’s website, or visit the Kickstarter campaign.

The Child Geeks enjoyed the game, finding it to be easy to learn and fast to play. According to one Child Geek, “I like it. All you have to do is push your luck and hope for the best. Those Zombies are tricky, though. You need to keep your Heroes close!” Another Child Geek said, “You mostly get eaten by the Zombies, and that’s OK because the games are fast. Once you are out, you don’t have to sit very long before the next game is played.” While the games were fast, most of the Child Geeks were disappointed at times about how fast they were knocked out of the game. Since the game is primarily luck driven based on random draws from the deck, the player’s ability to manage the undead threats is limited. These limitations did not seem to bother the Child Geeks other than just eye-rolling. The result was full approval from the Child Geeks.

The Parent Geeks enjoyed the game with their children, but it fell flat with their peers. According to one Parent Geek, “The game is light and casual—a fun game to play around Halloween if for nothing else the Zombies. Overall, I liked playing the game with my children, but my husband and I didn’t care for it. I felt you were limited as a player in your actions, and you are always forced to draw cards that you hope you can contend with. The game certainly felt exciting due to drawing blind, but it feels bad when you lose the game simply because your luck runs out.” Another Parent Geek said, “Great game for the fam. Fast and easy to learn. The game doesn’t require the player to manage their hand since there is no hand size limit, putting the player fully on the defense from the start. That’s just fine for a casual game, but not great for players who want to dive deeper into the gameplay.” When all the votes were in, the Parent Geeks gave Zombiefilled a mixed endorsement.

The Gamer Geeks weren’t fans. According to one Gamer Geek, “The game has no depth or strategy. The player needs to react to the cards for the most part, but is limited in doing so. Yes, I can mess with other players, but I won’t know the results of my actions immediately. It’s all based on hindsight. I think this game is best played by casual gamers who aren’t really looking for a game that will challenge them.” Another Gamer Geek said, “Fast and easy, but also shallow, requiring very little in the way of brainpower. This is ironic considering this is a game about Zombies that want to eat your brains. As such, I presume these Zombies will go hungry if they feed off the brains of the players. You don’t need to think much here. Draw a card, encounter a Zombie, and survive for the next round or don’t. Not much here for me.” When the last Zombie was put in the ground, the Gamer Geeks voted to burry Zombiefilled, as well.

Zombiefilled is not a complicated game to teach or to learn. That is the game’s greatest benefit and contribution. Perfect for the kids. Casual players and individuals who haven’t played much in the way of games will have no problem sitting down and understanding the game and its goal within just a minute or two. The game is easy.

But it’s the ease in which it can be played, and it’s light interaction that is the game’s greatest distraction and limitation. The entire goal is to be the first to play the “Exit!” Action card. To get to it, you have to draw cards. If the player draws a Zombie card and cannot defeat it or play it to the table, they lose the game. It was seldom, but we had players lose the game during their first turn. Yes, an average game takes 10 or fewer minutes, but that still doesn’t feel good. Instead of feeling empowered to enjoy the game, the player can feel out of control and at the whim of random outcomes. For most gamers that I know, that isn’t a desirable trait of any game.

That said, Zombiefilled doesn’t shy away from what it is and embraces the off-chance that the players are fully into a game that will determine the winner based on the luck of the draw and well-timed card plays that are fully based on available actions at the moment, which is not a bad thing. Zombiefilled is meant to be light, fast, and for goodness sake, not taken seriously. This frees up the player to sit down at the family gaming table and enjoy themselves. Which the Child Geeks and the Parent Geeks who played with them certainly did. For those looking for a game with more braiiinnnsssszzzzzz, they will find Zombiefilled decidedly lacking.