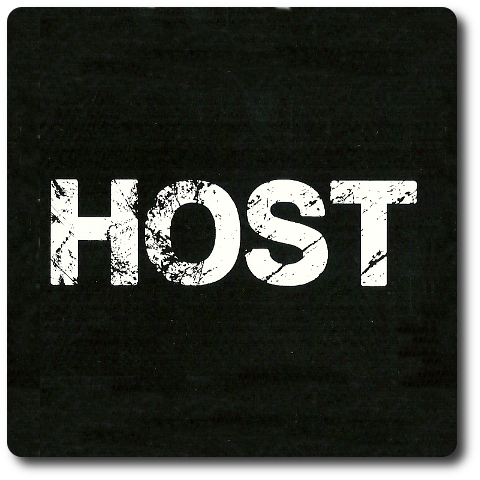 Dear lord, Ed Wood was right. Aliens have come to our planet to enslave Earth with the help of zombies that are very slowly chasing down the uninfected humans. You are part of an elite force of experts tasked to defeat the aliens and rid humanity of the undead. You boldly accept your mission, but unknown to your fellow experts, you have a private mission of your own. Meanwhile, humanity is either being probed, eaten, or enslaved. Probably all three.

Host, designed by Matthew Ryan Robinson and published by Broken Prism Games via the Game Crafter, is comprised of 74 Host cards, 13 Event cards, 11 Mission cards, and 8 Character cards. All the cards are as durable as your standard playing card and have minimal illustrations.

To set up the game, first separate the cards by type. You should have a Host deck, an Event deck, a Mission deck, and a Character deck. Shuffle the Host, Event, and Mission decks, placing them face-down in the middle of the playing area. These are the draw decks. Leave room for a discard pile. Set the Character deck back in the box, as these cards are not used during the standard game (see “Game Variants”).

Second, deal each player 1 Mission card and 4 Host cards. Players should keep their cards hidden from their opponents at all times.

That’s it for game set up. Time to save the world.

Host is played in turns with no set number of turns per game. On a player’s turn, they will take the following steps.

The first thing a player does is draw 1 Host card and add it to their hand. The player should now look at their cards and assess if they have won the game. How do you win the game? I’m glad you asked.

Each player has a Mission card. These cards list what the player must obtain to win the game. No two Mission cards are identical, but they can be somewhat similar. Similar enough where players are competing for the same cards, but different enough so players are not going about it the same way. Let’s look at one of the Mission cards. 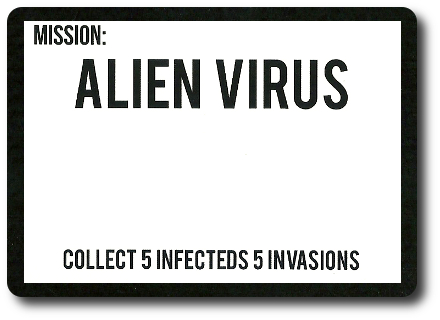 The “Alien Virus” Mission card requires the player who owns it to collect 5 “Infected” and 5 “Invasion” points. If the player has enough points to complete the mission, they win.

Points come from the Host cards. Each Host card will add and subtract points to two listed values. While there are no card suits in the game, colors are used to group the values. This makes it easy for players to identify which cards they want in their hand and which they want to pass. The Host card colors and the values they influence are listed here:

As you can see, for every Host card that adds or subtracts to a value, there is another Host card that does the exact opposite. For example, the Blue Host card on the left and the Red Host card on the right cancel each other out because both cards subtract the points given to a value the other card adds to. If you were working to complete the “Alien Virus” Mission card, you would want to pass the Blue Host cards since they reduce the points you need to collect. 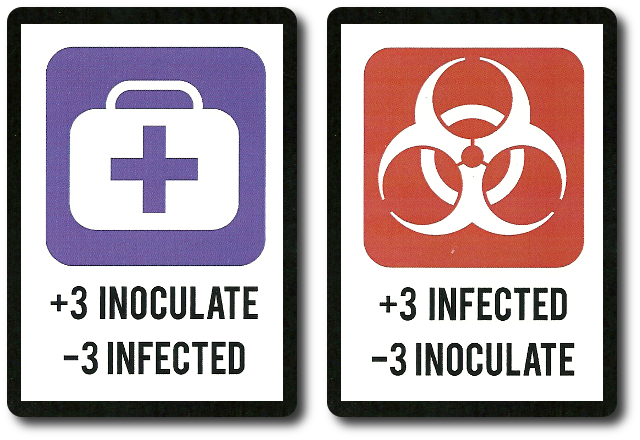 If the player determines that they have completed their Mission, the game is over. If not, then the player continues to step 2.

This step allows the player to pass any 1 Host card from their hand to any other player at the table. Cards are always passed face-down. Players should pass cards that are directly impeding their ability to complete their Mission card, but they should also pass their cards to an opponent who cannot benefit from it. If the player passes a card to an opponent and the card passed completes the opponent’s Mission, the opponent wins! Ouch.

After the player passes a card, they again determine if they have completed their Mission card. If the player does complete their mission, they win. If not, their turn is over and the next player in turn order sequence now goes starting with step 1 noted above. 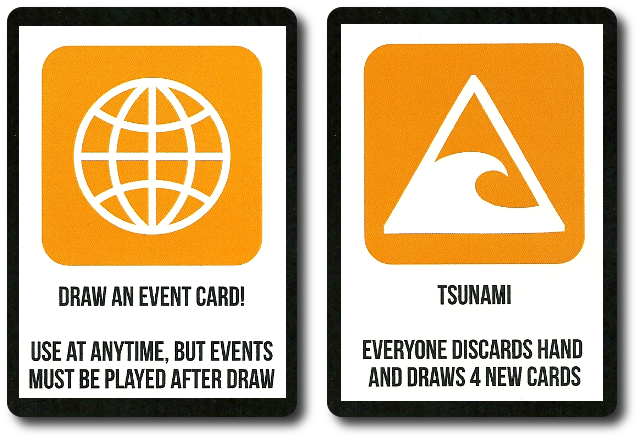 Whenever a player believes they have completed thier Mission card’s victory condition they can announce it to the other players at the table. They must now prove they have won by revealing their hand. If the player’s claim of victory is determined to be false, they are out for the duration of the game and their cards are discarded. If their claim is found to be accurate, they have saved the world and won the game. 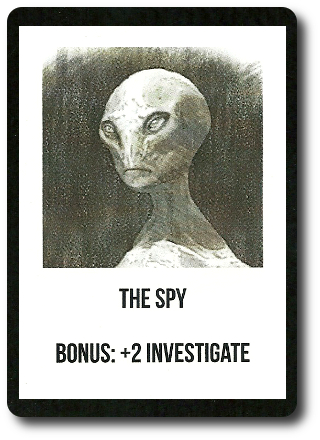 An Invasion for Two

When playing a 2-player game, players can either draw a new card or take 1 Host card at random from their opponent’s hand. Players may also discard 1 card instead of passing a card.

A number of our players found the Events to be unnecessary and disruptive. We removed the Host cards that allow a player to draw Event cards and the Event card deck from the game. Give it a try. We didn’t miss them and the game play was slightly less random with them removed.

To learn more about Host, visit the game’s web page on the Game Crafter.

The Child Geeks understood how to play the game right away and the only difficult aspect of the game play was the math which took longer to calculate than expected. This is especially true for Mission cards that had multiple values the players had to collect. Not terribly difficult, mind you, but it did take a bit longer than originally estimated. As the games progressed, the Child Geeks were able to assess their hands much faster. According to one Child Geek, “I really like this game! It’s easy and challenging at the same time.” Another Child Geek said, “What I like best is throwing down an Event card, especially when I think I’m losing! TSUNAMI!!!!!!” When all the aliens were destroyed and zombies put down, the Child Geeks unanimously agreed that Host was worth their time. 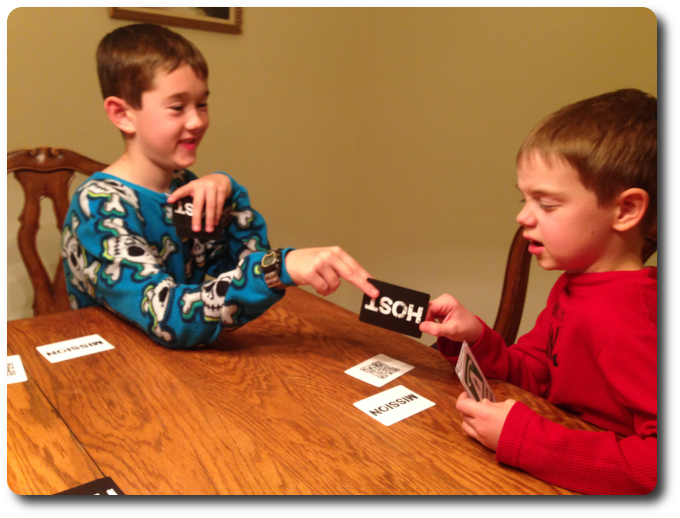 The Parent Geeks, both casual players and non-gamers, found Host to be a lot of fun, too. One Parent Geek said, “This is an easy game to teach, difficult to win, and fun to play. It’s a winner.” Another Parent Geek said, “This is a great game for the family and for my friends. I can play this just as easily with the kids as I could with adults.” The Parent Geeks seemed to excel as playing Event cards at just the right time to make everyone at the gaming table irritable, but that was part of the fun. Eventually, everyone became tired of the Event cards, but not the game. All the Parent Geeks voted to approve Host.

The Gamer Geeks were optimistic when they first started to play, but gradually became less and less interested. According to one Gamer Geek, “I get the game, but I think there is too much randomness and card passing.” Another Gamer Geek said, “If I was always passing to the same player and always getting cards from the same player, I could figure things out and play smarter. As it is, I’m just guessing and hoping I get the right cards before my opponents do.” It was clear that the Gamer Geeks were not loving Host, and each game they played further reinforced their opinion. In the end, the Gamer Geeks found Host to be too random, too dependent on luck, and completely devoid of any tactical or strategic game play.

For me, I enjoyed playing the game with a mix of Child Geeks and Parent Geeks the best. Everything is secret and you must read the other players. When I attempted to read the Gamer Geeks, all I got was obvious looks of disappointment and disgruntled eye-rolling. When I played with the Child and Parent Geeks, I could see them staring back and trying to read me, too. Now that’s fun.

The only aspect of the game I could do without are the Event cards. I don’t think they are needed. The game is random enough without the need to throw in even more randomness that scraps everything the players have been working for. We tried a few games without the Event cards and it worked just fine. This allowed players to just focus on the Host cards and their opponents without subtracting any of the fun.

I have found Host to be a great game for my kids when they want to “play just one more game before bed”. Host also works well as a light game before playing a heavier game. It’s like a stretching exercise for the brain before you start a mental marathon. I avoid playing it with more serious and experienced gamers, however. There just isn’t enough game in Host to keep them engaged and entertained. But when I’m around Child Geeks and Parent Geeks, Host is always welcome at the gaming table. Does Host sound like an interesting game to you? If so, give it a try.