Dale of Merchants 2: The Era of Trade Masters Game Review 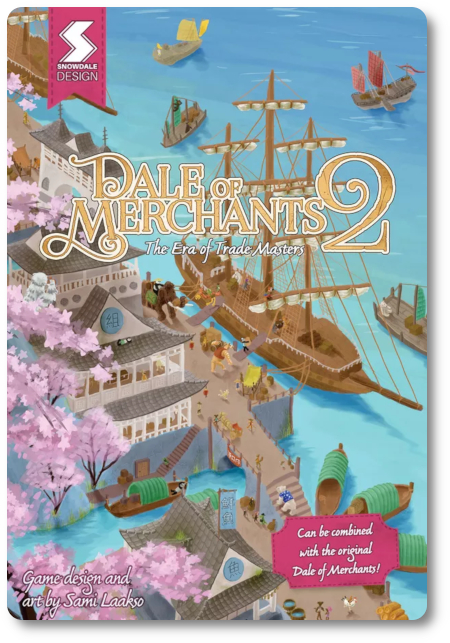 Czech writer best know for The Unbearable Lightness of Being, Milan Kundera, said “Business has only two functions – marketing and innovation.” In this game, it’s all about getting the goods to market and beating the competition to the punch. You must be creative, innovative, and most of all, flexible. All your plans at the moment might go up in smoke or all your wildest dreams might come true, but way too soo. It’s all about balance, supply, demand, and outthinking your opponent.

Dale of Merchants 2, designed by Sami Laakso and published by Snowdale Design, is comprised of 110 cards, one game board, and one custom six-sided die. The cards are as thick and as durable as your standard playing card. Illustrations, also by Sami Laakso, are colorful and bright, bringing each of the animals to life and furthering the game’s theme.

Dale of Merchants 2 brings six new animals to play with. Similar to the original game, each animal has its own deck and unique game style.

To put it another way, players now have the ability to set up what I like to call a “minefield.” They can play Technique cards in front of them to deter opponents or play them to use the opponent’s plays in their favor. Either way, this new adjustment to the rules gives players a lot of options.

Filling Up Your Hand

When filling up your deck at the end of your turn, taking and discarding cards can trigger a new deck. However, searching through a deck does not. This is important as several Technique cards will not be triggered as a result.

To learn more about Dale of Merchants 2, visit the game’s webpage.

The Child Geeks loved the new animals and how the game was played by adding them into the rotation. According to one Child Geek, “The game is still easy to learn and still a lot of fun to play. The new animals don’t make the game any more difficult, but they do make you think in fun new ways.” Another Child Geek said, “I like these a lot. I played them with only the new animals and added them to the old animals, too. They all made the game better and more fun!” The Child Geeks had no concerns over how the new cards were played and enjoyed adding them to their rotations. In many cases, I had to remind the Child Geeks that they were playing with the new cards, which is a strong testament to how well designed the new cards are and how seamlessly they can be added to the original game. When all the games were over, the Child Geeks gave Dale of Merchants 2 their full endorsement.

The Parent Geeks also found the new animals and how they changed the game to be entertaining and engaging. According to one Parent Geek, “Each animal deck brings different ways to play the game. With these new animals, there are even more possible new ways to play and strategize. I’m really enjoying it.” Another Parent Geek said, “I was concerned that these new cards would change the way the game was played. They do, but in an excellent way that is easy to learn and a lot of fun. Like the original game, each animal provides the player with a new approach to the game. Although they were new, they never felt out of place.” When the last merchant stale was closed, the Parent Geeks counted and found Dale of Merchants 2 to be an excellent buy.

The Gamer Geeks still found Dale of Merchants and Dale of Merchants 2 casual, but they also still enjoyed it. According to one Gamer Geek, “I’m still not a huge fan of the game, but I have yet to play a single game that I didn’t enjoy. There are better deck builders on there, but this game and its original are solid. I’d play it again and recommend it to anyone looking for a casual deck builder.” Another Gamer Geek said, “A great game that keeps getting better. These new animals bring new ways to play that are fun, deep, and strategic. Great stuff.” When the last item was sold and the coins counted, the Gamer Geeks found Dale of Merchants 2 well worth their time.

Dale of Merchants 2 brings to the table new opportunities and new combos. You set up each game with random decks, or you can decide which animals to bring along. Either approach always guarantees some exciting and engaging gameplay. I agree with the Gamer Geeks that there are deeper and more interactive deck-building games on the market, but the Dale of Merchants series is a strong performer and has yet to let me down. Each game is interesting and has kept all at the table leaning in for more. You really can’t ask for more than that from any game.

Let’s take a moment here to discuss the pros and cons of this addition to the series. First, I believe these new animal decks build onto the original game. They fill in holes and bridge between the original animals, to a point. Think of them as an extension to what I believe to be a solid offering in the original game. As a result, you now have some exciting options, but these options come with a catch. While none of the animal decks are unbalanced, they add elements to gameplay that might not be wanted. The Alligators, for example, make the game very, very, VERY “in your face” when it comes to gameplay. Another example is the Foxes, which will cause a lot of shifting of the cards repeatedly to a point where the players might feel they never had control of their cards in the first place. But these are extremes and will never upset the game fully. It will depend on what other Animal decks are added, which might prove to be a disastrous gathering of animals or just the right amount. The fun is in figuring it out.

3 Responses to Dale of Merchants 2: The Era of Trade Masters Game Review