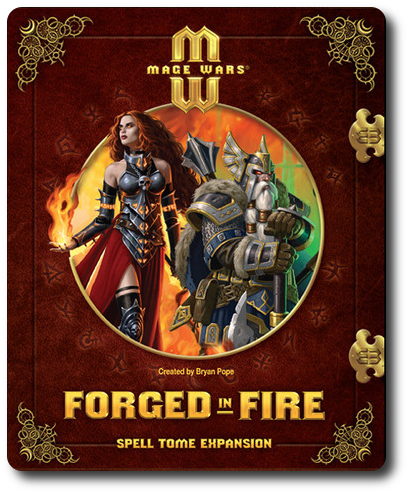 Far beyond the forests and plains lies the great mountains. Their peaks reach ever-upward and disappear into the heavens. Below them lies the great Kingdom of the Dwarves who have toiled for centuries to perfect the art of metallurgy. Their craft and artistry is legend and their skill is unmatched. They have even mastered the ability to forge the very fabric of magic with fire and hammer. This has drawn the eye of the Lord of Fire who covets all things born of flame. The Lord of Fire has sent his most powerful warlock to take from the dwarves their secrets and skills, but such a thing is not easily done.

Mage Wars: Forged in Fire, by Arcane Wonders, is comprised of 2 new Mages, 2 Mage cards, 2 Mage Ability cards, 158 new Spell cards, and 22 markers that represent different conditions in the game. The level of quality presented in the expansion is the same as the core game, Mage Wars, which is required to play.

This expansion provides 2 new Mages players can use to build their Spellbooks around. Like the previous Mage Wars expansions, each new card offers a new possible opportunity to create combos, devastating attacks, and unbreakable defenses. This expansion’s theme is based around the schools of Darkness, Fire, War, and Earth. The expansion includes a complete card list that can be used to create each of the new Mage’s starting Spellbooks, but players are always welcome (and encouraged) to build their own. 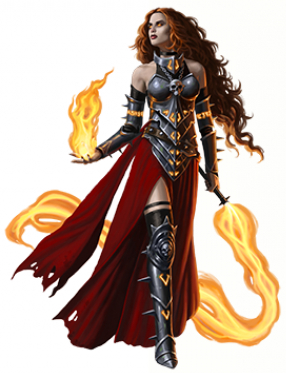 Beautiful and full of fire, the Warlock wants to see the world burn. Her schools of focus include Darkness and Fire. Which is to say, she’s a moody woman with a temper that could turn you into a pillar of ash. Demons and imps are her footsoldiers, including the Lord of Fire himself, Aldramelech. Her attacks deal in pain and prolonged agony, as she wears down her opponents little by little until there is nothing left but a broken will and burnt body. Fire is her pet and she has countless curses on her tongue. If you come into contact with this demonic redhead, make sure you turn around and run the other way. 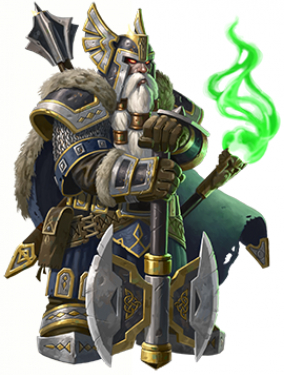 Warlord of the Anvil Throne

Stoic and intolerant of nonsense, the Warlord is a pillar of strength and will. His mind and body have worked at the forge and the battlegrounds for hundreds of years, with each blow of the hammer teaching him patience, strategy, and tactics. His schools of focus are War and Earth. An excellent combination of brutal combat and impenetrable defenses. The Warlord’s greatest skill is his Runesmithing, which allows him to affix runes of great power to his equipment. For example, the Rune of Fortification, which makes armor stronger. Or the Rune of Reforging which imbues the item with magic. But if these should fail, the Warlord can call upon his army. When he sends his troops into battle, the Warlord can give them Battle Orders which gives his soldiers a temporary bonus in combat.

This expansion comes with several conditions and effects worth noting.

I am very excited about this expansion for two reasons.

First and foremost, the Parent Geek and Child Geek approvals have jumped from “rejected” to “mixed”! This is due to continued game playing, increase in skills, and experience. Mage Wars is not a difficult game to teach, but it can be a real bugger to play. There are a lot of things that a player can do and even more that they shouldn’t. Add in the ability to customize the game and this makes each game playing session slightly different. It’s difficult to learn from past experiences, when every new experience is unique. Over the years, we’ve been working with young Child Geeks who are now growing up to be excellent game players. Our Parent Geeks have also improved, moving out of the non-gamer circle and settling in comfortably as a true casual gamer. When we played Mage Wars to review this expansion, pieces just started to fall together and the game play was smoother. A smooth game almost always results in a happy gamer. We still have some players who “just don’t get it” or find the game to be too much for them, but Mage Wars is certainly growing in popularity and playability.

Second,  this expansion brings to the game even more ways to subtly craft my Spellbook. Tactics and strategy have always been a major part of this game, and the new cards give me even more ways to go about crushing my enemies. A few of our players believed that the expansion was just “more of the same”, to which they are not completely wrong. Many of the spells do thing and have effects that are similar. You are always damaging and hindering your opponent, after all. The important differences are the Schools of Magic and the cost of the cards. More cards means more options for those who are looking to create a Spellbook full of incredible power and unstoppable attacks.

If you are a fan of Mage Wars, this is an expansion you will enjoy. A lot of neat options and things to try. If you are still struggling to learn how to play Mage Wars, I’m sorry to say that this expansion won’t make anything easier. Unless you like the heat, that is.