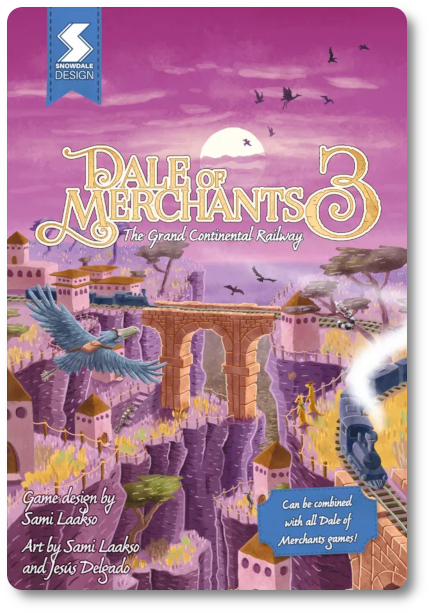 French novelist, poet, and playwright, Jules Verne, said: “Trains, like time and tide, stop for no one.”. Heavy powerful, trains will travel on their tracks, laboring with their load, no matter the weather. In the world of commerce, the railroad system opened new corridors to profit and opportunity. Prosperity can now be found in distant corners of the land that could only be traveled to by foot. For you, a savvy merchant always on the lookout for new markets, the rails offer a gateway to new riches, but the competition is always fierce.

Dale of Merchants 3: The Grand Continental Railway, designed by Sami Laakso and published by Snowdale Design, is comprised of 110 cards, one game board, and one custom six-sided die. The cards are as thick and as durable as your standard playing card. Illustrations, also by Sami Laakso and new artist Jesús Delgado, are colorful and bright, bringing each of the animals to life and furthering the game’s theme.

New Merchants To Contend and Partner With

To learn more about Dale of Merchants 3, visit the game’s webpage.

The Child Geeks were eager to adopt the new animal decks and enjoyed using them both as a standalone and mixed with the other cards in the Dale of Merchants series. Of course, each Child Geeks had their favorite, but none of the new animals were left to the side. According to one Child Geek, “More great cards to play with. At this point, I don’t really see the differences anymore. Each animal brings something slightly different, but each is always really fun to play with.” Another Child Geek said, “Yeah! More animals! The game is great because there are so many options without learning a lot about each animal. Just pick and go!” The Child Geeks played the game multiple times, mixing and matching, finding that their love of these animal merchants was strong.

The Parent Geeks were also satisfied, but I don’t say impressed. According to one Parent Geek, “I think this is just more goodness to the game. I didn’t see much in the way that was overly new, other than the subtle ways each of the new decks allows the player to craft their road to victory. I actually like this because it allows us to shift our thinking in subtle ways versus radically upsetting everything I really enjoy about the game series.” Another Parent Geek said, “Just more goodness. Like an extra dollop of whipped cream on a tasty pie. Yes, please! Is it too much, though? Never! How can you go wrong with more opportunities to enjoy the game? You can’t!” The Parent Geeks thought the new cards in the series were a welcome addition, if not specifically asked for or needed. Regardless, it got their vote for full approval.

The Gamer Geeks, like the Parent Geeks, were happy to play with new cards but didn’t feel the game really needed it. Still, they were delighted to find that each of the new animals did – indeed – offer a new approach, albeit a bit too subtle at times. According to one Gamer Geek, “I like the fact that the game designer is still working on new and interesting ways to approach the game. But right now, I don’t know, feels like a few of these decks are just shifting their approach to a very slight angle and calling it new. I don’t think there is anything terribly needed or missing from the original game, and I don’t think this expansion or addition or whatever we want to call it is needed. That said, I’m glad to have access to it. The game is still fun, and these new cards never changed that.” Another Gamer Geek said, in a much less wordy review response, “Good stuff. Enjoyed it.” When all the Gamer Geeks were done with their games, they voted without hesitation to fully approve Dale of Merchants 3, which is an addition. Not an expansion. I need to make that clear.

Dale of Merchants 3 is similar to another great music track on an already great gold album. It blends in and provides value to the whole and is also just plain good by itself. That said, is it needed? Of course not. And nor was Dale of Merchants 2: The Era of Trade Masters or Dale of Merchants Collection. The original game was solid, stood alone, and was good enough. But one cannot argue that the original game also left the door open to other possibilities. None of which were necessary to patch holes or address the missing depth of play. Each of the additions to the game extends the original idea, revitalized with a new and different approach. So, needed? Nope. Wanted? You bet! It’s always boring to take the same path. The brain needs new experiences and things to ponder. This addition does just that and does it just as well as the other additions that came before it.

Do travel this railroad with the newest animal merchants to learn if they help or hinder your goals of merchant domination. I hope you enjoy the trip.