Please Take Note: This is a review of the final game, but it might change slightly based on the Kickstarter campaign’s success. The game is being reviewed on the components and the rules provided with the understanding that “what you see is not what you might get” when the game is published. If you like what you read and want to learn more, we encourage you to visit the game publisher’s website or visit the Kickstarter campaign. Now that we have all that disclaimer junk out of the way, on with the review. 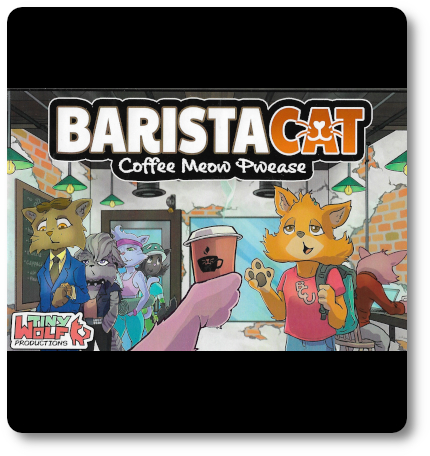 American lawyer and statesman who served as the 16th president of the United States, Abraham Lincoln, said, “If this is coffee, please bring me some tea; but if this is tea, please bring me some coffee.” It amuses me to think how difficult a customer President Lincoln would have been if he had a coffee shop nearby. I mean, come on dude, make up your mind. But nothing compares to the customers in this game that demand their coffee meow and won’t leave until they get it. So do what you can to please the customers, but keep in mind at all times that you need to get paid, too.

BaristaCat, designed by Adam Shields and to be published by Tiny Wolf Productions, is comprised of 64 Customer cards and 104 Ingredient cards. As this is a review of a prepublished game, I cannot comment on the game component quality. However, the copy we were provided is considered “a professionally produced prototype,” which was very well made indeed. Illustrations by Reese Banke are colorful and fun, featuring various anthropomorphic cat-people who are in need of a good cup of coffee.

Getting Ready to Open

To set up the game, first separate the Customer cards from the Ingredient cards. Then, shuffle each card type separately to create their own unique decks. 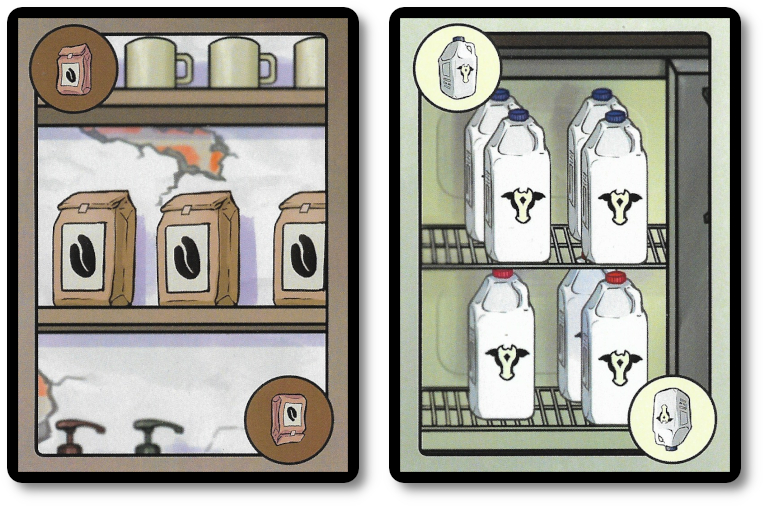 That’s it for game setup. Determine who be the first player and start getting those cats their coffee!

BaristaCat is played in turns with no set number of turns per game. A player’s turn consists of two phases. Each is summarized here. 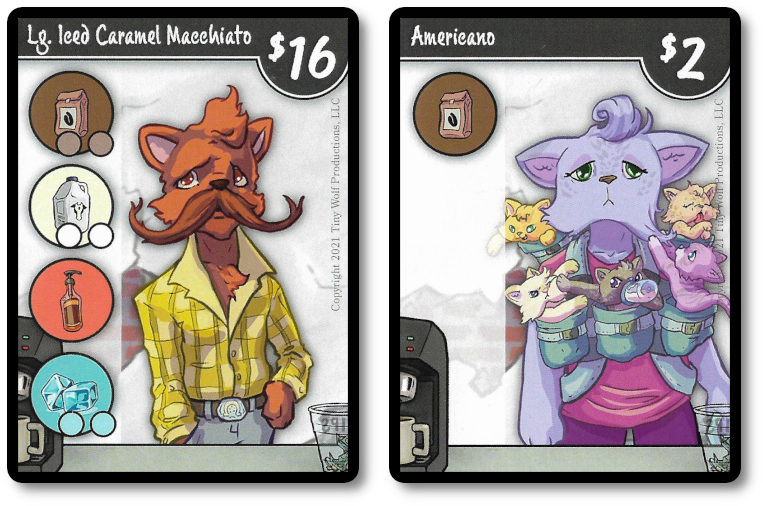 Opponents can disrupt a player’s turn. Before discarding ingredients and collecting a Customer card, give opponents a moment to evaluate if they have any cards they want to play that will disrupt the completion of the order. 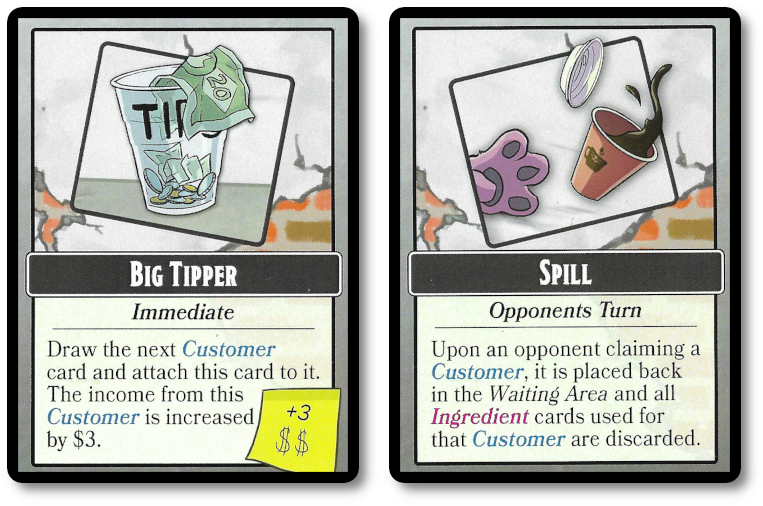 The player is welcome to complete as many orders as they like as long as they have Ingredient cards available and customers impatiently waiting for their drink. Once they decide they don’t want to complete any orders, they can move on to the next phase of their turn.

The player now draws five Ingredient cards, adding them to their hand. There is no limit to the number of cards the player may have in their hand during the game.

This completes the player’s turn. Before the next player takes their turn, draw new Customer cards to replace any, there were taken this turn.

The game continues until a player has collected a total of 10 or more Customer cards during phase one of their turn. Then, the player finishes their turn as normal.

All players now add the money value noted on their collected Customer cards, taking into account any “Special” cards that might adjust these values. The player who has the most money wins the game.

To learn more about BaristaCat, visit the game publisher’s website or visit the Kickstarter campaign.

The Child Geeks enjoyed the game but found it frustrating when they couldn’t complete an order. There is exactly one Customer card out of the 64 available that does not list coffee as its first and main ingredient. This means if the player doesn’t have at least one “Coffee” Ingredient card in their hand, they have very little chance of completing any orders during their turn. And while it’s necessary to pick and choose which orders you want to fulfill to maximize profits earned, it can be frustrating not to have the ability to make any choice. According to one Child Geek, “I like the game but don’t like it when I can’t make any of the cats coffee.” This sentiment was shared by the Child Geeks and happened enough times where it was noticeable to all who played. However, it’s only a matter of time before coffee makes its appearance in the player’s hand. At which point the player may start to fulfill the orders. This always felt great and made any concerns the Child Geeks had about their lack of coffee stock evaporate. According to one very pleased Child Geek, “Sometimes you can’t complete an order, and sometimes you can complete a lot. Most of the time, you have to think about what you really want to do. I liked the game.” When the last coffee cup was cleaned for the day, the Child Geeks all agreed that BaristaCat was a good time.

The Parent Geeks found the game to be very straightforward and casual, enjoying how fast the game was played and the need to consider the customers you were going to work with carefully. According to one Parent Geek, “The game is straightforward, but the need to balance collecting a customer and earning as much as you can as a result was a great exercise in tactical thinking.” Another Parent Geek said, “An easy game to play with the kids and a fun one for the family table. The Littles will need help reading some of their special cards, but they had no problem fulfilling orders. This made it fun for everyone.” After a couple of games and cups of coffee, the Parent Geeks pushed back from the table and agreed that BaristaCat was a game they’d take a refill of.

The Gamer Geeks were not impressed. According to one Gamer Geek, “I found the game boring and repetitive. The fact that you can go several turns without fulfilling any orders is a clear misstep. I think the game will do well with families and kids, but for those of us who like a game with meaningful gameplay, it won’t quench our thirst.” Another Gamer Geek said, “This is a cute game, but it didn’t entertain me. I wanted more control of the cards, a queue of sorts for the customers, and more thinking involved. Clearly not the kind of game this was intended to be. I’d recommend it for my kids and those who are looking for a super casual game, but not for anyone else.” The Gamer Geeks voted, and all agreed that BaristaCat was too bitter to drink and enjoy.

BaristaCat is a very light and casual game. It has just enough player interaction to be interesting without being annoying and makes up for any disruption by playing quickly. The decisions in the game range from being stupidly easy (or not at all, as the Child Geeks stated) to ones that require a moment or two to consider. The reason being that this game is not just about collecting customers. There is more to it than that. Yes, you can collect the necessary ten customers without thinking about it, but all that does is end the game. It doesn’t give you victory. The player who has the most money wins. This means a player with ten cards could lose to a player who only has four. I’ve seen it happen more than once.

This is interesting because the game wants you to play it fast and loose, but you shouldn’t. Of course, this was completely lost on the youngest of Child Geeks, but everyone else quickly understood that the goal was to take home the most money, not please the most customers. My 17-year-old, who does actually work for a coffee shop, understood this very well. He also commented that it meant this particular cat-focused coffee shop had horrible customer service, which I found funny because dads are weird like that.

What we have here is a game that intrigued the adults and allowed our youngest Child Geek, who is five and half years old (emphasis on “year and a half”…very important), to play a game together. And we played it easily. Yes, there was frustration at times, and the game speed can tend to slow down a bit when a player has a lot of Ingredient cards and one too many options to clearly know what to do next. Still, none of this was particularly troublesome or negatively impactful to the game playing experience. Truly, this is a game for the casual players and the family, leaving the gamers who enjoy a robust experience with depth to seek out other opportunities.

You needn’t like coffee (or cats) to like this game. So give it a try with your friends and family to see if these cats serve up a good cup of joe.