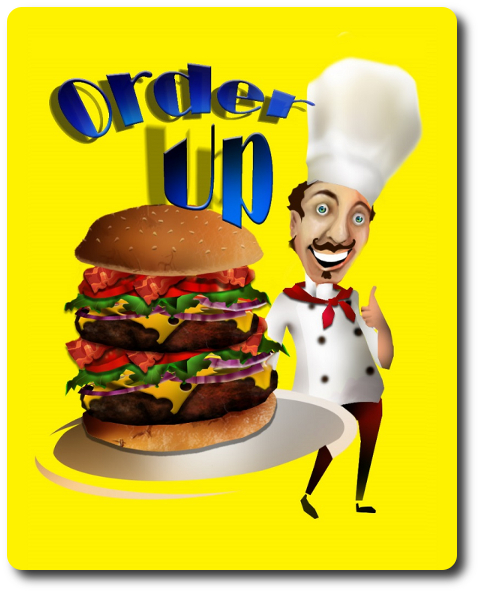 Celebrity Chef Gordon Ramsay said, “Kitchens are run on emotions. I may get upset. But the most important thing is, it’s not personal.” That might very well be, but when emotions run hot, the orders start flying in, and chaos erupts, a kitchen becomes a pressure cooker. In this game, all the players are attempting to get orders out the door as fast as they can, but there are only so many plates of ingredients to be had. The player who works the fastest and is the most aggressive will win, but don’t expect to make many friends along the way.

Order Up, designed by John Warfel and published through the Game Crafter, is comprised of 52 cards. Most of the cards represent ingredients used to make a burger. The illustrations on the cards portray these ingredients in a very simple and clean way, making it easy to clearly see what each card is meant to represent.

To set up the game, first remove the 4 Burger cards and then shuffle the remaining deck of cards. Whomever shuffles the cards is now referred to as the “Dealer”.

Second, the Dealer gives each player 5 cards, face-down and 1 Burger card. The 5 cards are the player’s starting handing. Players should look at their cards but keep them hidden from their opponents until played. The remaining cards are placed face-down to become the draw pile. The Burger card is for reference and is used to help the player earn points.

Third, starting with the player to the Dealer’s left and continuing in turn order sequence, if the player has the “Bottom Bun” Ingredient card in their hand they play it to the middle of the playing area now. 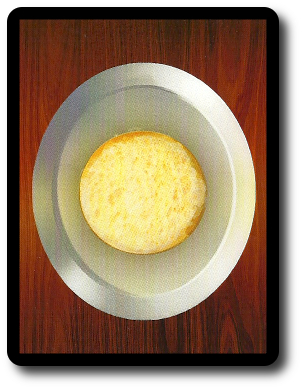 Order Up is played in real-time, with all players taking their turns simultaneously. As soon as the “Bottom Bun” Ingredient card is played to the middle of the playing area, all cards can be played freely. Thematically speaking, the game is attempting to duplicate the frantic and chaotic nature of a kitchen full of short order cooks, scrambling to complete orders to satisfy the hunger of the impatient customers.

The goal of Order Up is to build burgers using certain ingredients. The burgers ordered are represented by Burger cards that each player has. The restaurant they work for has 4 burgers on the menu. The more ingredients the burger has, the more difficult it will be to build, but the effort will be worth it. The bigger the burger, the bigger the points. 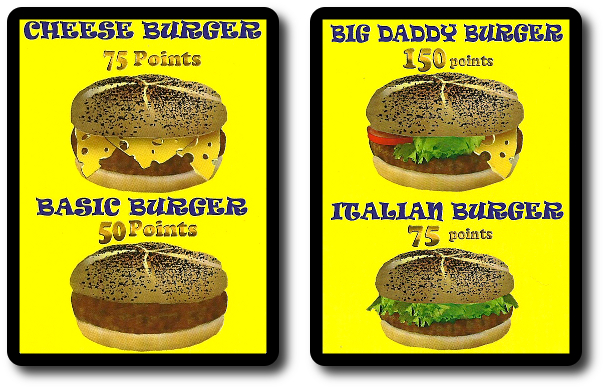 Not everything in the kitchen is worth throwing on a burger, however. If a player plays the “Syrup”, “Banana Peel”, or “Fishbone” Ingredient cards on a pile of ingredients, game play temporarily stops and all the Ingredient cards in that pile are discarded. All opponents then draw 1 card and add it to their hand. Game play then resumes.

The Fast Food and the Furious

As soon as a “Bottom Bun” Ingredient cards is played to the table, the players can start playing cards to it, but only 1 card at a time. If the player doesn’t have any Ingredient cards they want to play, they can draw 1 card. There is no limit to the number of cards a player can have in their hand, but caution should be taken. Cards not played don’t earn the player any points. Having lots of cards in the player’s hand certainly gives them options, but it will not necessarily earn them victory.

BEHOLD! The Italian on Wheat!

The game continues until 1 player has played the last Ingredient card from their hand. Game play immediately stops and any cards still in the players’ hands are discarded. Points are now awarded. Collected piles of ingredients are matched to different burgers and any points earned are added together. The player who ended the game by emptying their hand is awarded an additional 50 points. The player with the most points wins the game and is promoted to Fry Cook.

To learn more about Order Up, visit the game’s web page on the Game Crafter.

The Child Geeks quickly understood the game’s objective and rules. They jumped into the game play and mostly laughed, but also growled. The game can move very fast and it’s easy to miss opportunities when playing with faster players. According to a 5-year-old Child Geek, “I like that I can play the game, but I need everyone to slow down.” While Child Geeks as young as 5-years-old demonstrated complete understanding of how the game was played, their overall speed always kept them slightly behind. This did reduce their level of fun, but not enough to stop them from playing. An older Child Geek said, “The hardest part of this game is remembering what is on the table and what you have in your hand.” Which is actually the whole game. If players spend too much time scanning their hand and the table, they will miss out on scoring opportunities. Order Up is meant to be fast and chaotic, which means ordered thinking has no place in the game. When all the games were over, the Child Geeks agreed that they liked the game in short bursts. As one Child Geek so expertly put it, “You have to be in the mood for this game.” 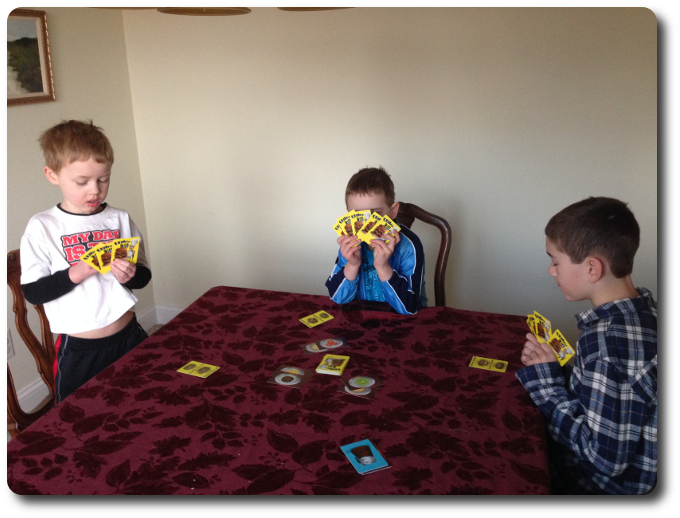 The Parent Geeks mostly enjoyed playing the game with their Child Geeks, but didn’t care for the game with just adults. One Parent Geek said, “The game is OK, but it’s just not a game I want to play with other adults. I’d rather play something that has more depth and makes me think instead of just forcing me to play quickly.” Another Parent Geek said, “I like that the game is easy enough for my youngest to play, but the older you get, the less interesting this game becomes.” To be clear, none of the Parent Geeks thought that Order Up was a bad game. They just didn’t think it was a game for them. As one Parent Geek put it, “I enjoy games that are slower, deeper, and challenge me on an intellectual level. The only thing this game challenged was my ability to play quickly and my patience.” When the votes were in, the Parent Geeks gave Order Up a mixed level of approval.

The Gamer Geeks played one game and decided to not play it again. As one Gamer Geek put it, “This is a one trick – excuse me – one burger pony. Play it once and you’ve played it all. It’s not a game I enjoy, but I can see myself playing this game with kids.” Another Gamer Geek said, “I think the game is flawed, or better put, weekly designed. You are always building the same pattern. The only real challenge is being the first to grab a completed recipe.” With the ability to have so many cards in your hand, the Gamer Geeks figured it was easier to just draw all the cards and very quickly build burgers in front of them, but this created additional problems. For example, a player’s opponents to the left and right simply waited until the toppings were done and then slammed a “Top Bun” Ingredient card down. Technically a legal move, but it made the game annoying instead of allowing the players to enjoy it. When all the dishes were cleaned up, the Gamer Geeks voted to reject the game.

Order Up is fast and chaotic at times, which might or might not be fun. Players have to enjoy the thrill of quick plays, made dashes, and out-of-nowhere upsets. Order Up is all about simply being faster, not smarter or more skilled. This makes the game accessible to younger Child Geeks, but it starts to get a bit old for older geeks who just want life to slow down a bit so they can enjoy a game. Clearly, knowing what you are getting into before you sit down for a game of Order Up will help the player mentally (and perhaps physically) prepare for the energy level that is required.

As for me, I liked the game with my little geeks, but didn’t care for it with other adults. Like the Parent Geeks, the game just didn’t do it for me. I appreciated what Order Up was about, but didn’t like the game play when it was just my peers. All that changed when it was just my little geeks. The game is a lot of fun with them and I greatly enjoy the look in my children’s eyes when they steal my burgers. If this sounds like a game you’d like to play with your Child Geeks or some energetic adults, give Order Up a try. It might not be the best game you’ve ever played, but I think it’ll satisfy your burger cravings.