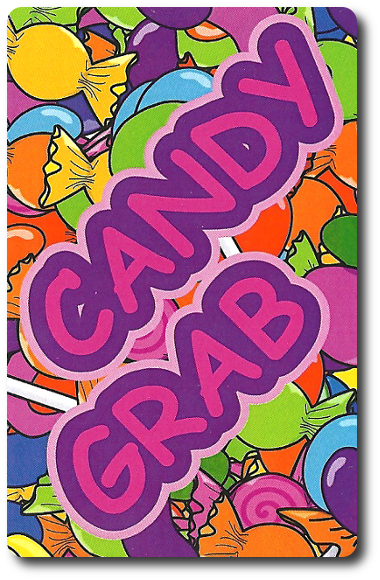 I remember jealously guarding my Halloween candy when I was a child. I would stash little caches of sugary goodness behind the couch, in my closet, and underneath my bed. I’m sure my mom thought I was crazy, but candy can be more precious than gold to a child. In this game, candy is the only thing you’ll be after, too.

Candy Grab, designed by Matthew T. Williamson and published by the Game Crafter, is comprised of 60 Candy Grab cards and 30 Candy cards. The cards are as thick and as durable as your standard playing card. The illustrations depict candy with happy faces, suggesting they have no idea they are about to be eaten. Ah, blissful ignorance…

To set up the game, separate the Candy Grab and Candy cards to form two different decks. Shuffle each deck thoroughly.

Second. deal each player 5 cards from the Candy deck. These cards are placed with the happy candy side face-up in front of each player to form a row. This row is referred to as the player’s “Candy Pile”. The other side of the Candy card is an image that depicts a wrapper. Wrappers indicates that the candy has been stolen and eaten.  Place any remaining Candy cards to one side of the game playing area. 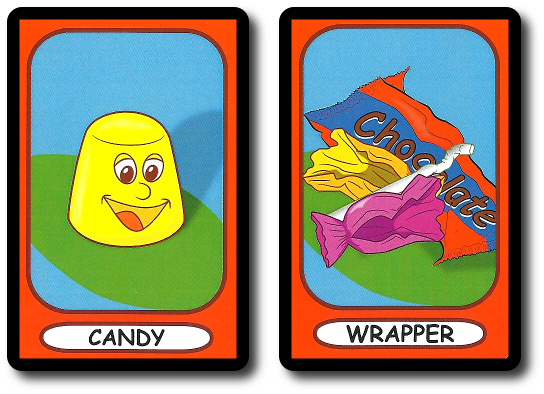 That’s it’s for game set up. The player left of the dealer is the first player.

Candy Grab is played in turns with no set number of turns per game. A player’s turn is summarized here.

The first thing a player will do on their turn is draw back up to 5 Candy Grab cards. Cards are taken from the Candy Grab draw deck and added directly to the player’s hand. This step is only taken if the player has less than 5 Candy Grab cards. If there are no more cards in the draw deck, shuffle the discard pile and place it face-down to create a new one.

This action card allows the player to take 1 Candy card from an opponent’s Candy Pile and add it to their own, wrapper side up. The wrapper indicates that the Candy card was “eaten”. 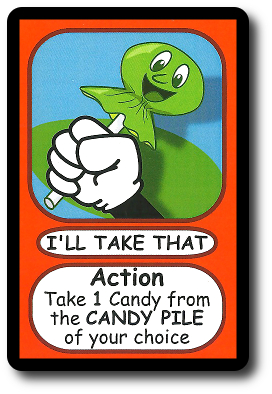 This action card forces all players to take their hand of cards and pass it to the opponent on their left. Every player how has a new hand of cards, for better or worse. 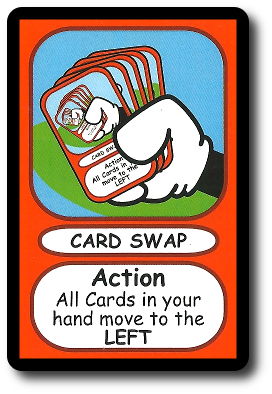 This action card is similar to the “Candy Swap” action card, but it forces all players to pass their Candy Pile to the opponent on their right. Only the Candy cards showing candy are moved. Any wrapper Candy cards remain with the player. 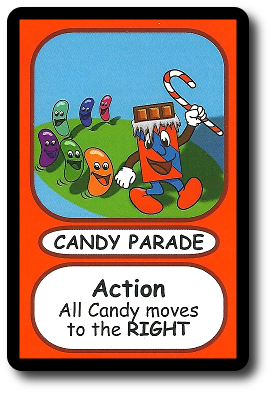 Hands Off My Candy!

A player can protect their candy hoard by using defense cards. These are played from the player’s hand out of turn in response to the “I’ll Take That” action card. A player is never required to play a defense card. When they are played, they are placed in the discard pile. The defense cards are as follows:

This defense card redirects the action card’s effects played by the opponent to the person on the player’s right. The new target can play a defense card if they have any. Multiple defense cards can be played and the active player’s turn does not end until they either get a piece of candy or their turn is forced to end. 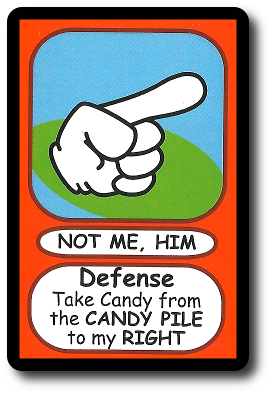 If a defense card redirects the action card’s effects to a player that does not have candy to take, the next player going in the same direction that does have candy becomes the new target.

This defense card is similar to the “Not Me! Him!” defense card, but it redirects the action card’s effects to the person on the player’s left. 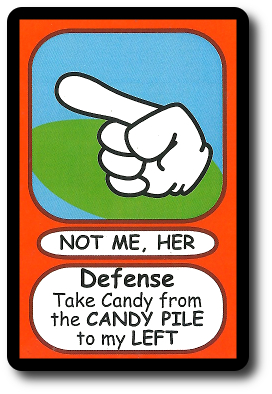 I Don’t Think So!

This defense card cancels the action card played by the opponent, forcing an end to their turn and saving your candy from their greed. 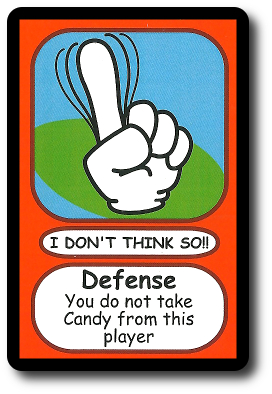 Too Much Candy? NEVER!

The game continues with players taking turns and attempting to grab their opponents’ candy. If a player is ever out of candy in their Candy Pile, they are still in the game. A “Candy Parade” Action card could be played, for example, that gives a player a candy windfall. Players without candy can still eat their opponents’ candy, as well.

The last player to have candy in their Candy Pile (not counting the wrappers) is the winner. Second place goes to the player who collected the most candy wrappers.

Two game variants are provided if players want to change the standard game a bit. Each are summarized here.

If a single game isn’t enough, players can play several in a row. Keep track of a player’s score per game by awarding them 10 point for every wrapper and 20 points for every piece of candy they still have. Keep playing games until 1 player has accumulated 200 or more points. This player is truly the Lord of the Candy (or Lady).

The Child Geeks really enjoyed themselves. They hammed it up when they stole someone’s candy and lamented dramatically when candy was stolen. In some respects, the Child Geeks made the game easily five times more interesting than what it probably was simply because of their enthusiasm. According to one Child Geek, “This game is like a little mini battle for candy! The only thing I don’t like about it is that I cannot really eat any candy I win.” A lot of Child Geeks thought the same thing. Another Child Geek said, “What I like most about the game is that you can most of the time protect  yourself.” The defense cards do help a great deal, but the more savvy Child Geeks started to pick on those players who had fewer cards. Fewer cards means a better chance to successfully steal candy! When all the candy thieving was over, the Child Geeks voted to approve Candy Grab. 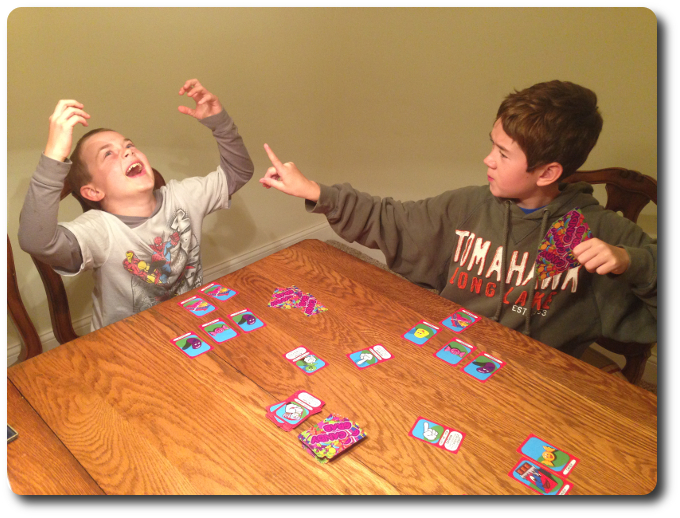 “AAAAARRRGGHH!”, screams my son as his attempt to steal candy is foiled yet again!

The Parent Geeks enjoyed the game with their Child Geeks, but found it rather boring when playing with their peers. According to one Parent Geek, “I like playing this game with my kids, but it falls flat with adults.” Another Parent Geek agreed saying, “What makes this game fun is the enthusiasm my kids and their friends have when playing. Adults just try to win, but I don’ think they are really having fun.” Is Candy Grab a game just for kids? One Parent Geek didn’t think so, saying “This is a fun game to play. There’s no real strategy other than to always guess who is the weakest at the table, but that always changes. The game kept me interested and smiling.” All the Parent Geeks agreed Candy Grab was a great game for the Child Geeks and for the family, but not necessary for the Parent Geeks. The end result was a mixed level of approval.

The Gamer Geeks rolled their eyes at Candy Grab. According to one Gamer Geek, “This game is prefect for kids or for those who don’t know anything about games. There’s nothing to this that appeals to me on any level.” A bit harsh. Another Gamer Geek said, “The concept is sound and the designer has some good ideas, but this is not a game for gaming elitists. I don’t think it was intend for anyone but kids.” When the Gamer Geeks saw how much fun the Child Geeks had with Candy Grab and played a few games with then, they softened a bit, but not much. As one Gamer Geek said after playing a game with a table full of Child Geeks, “I think the game is great for kids and maybe great for families with kids, but not for gamers who play a lot of games.” When all the votes were in, the Gamer Geeks all rejected Candy Grab.

Candy Grab reminded me of why I loved games so much as a kid. The entire focus of the game is to let everyone have fun as much as possible. But by doing so, a number of important gaming aspects had to be removed or watered down to ensure that the learning curve and difficulty of the game was set low enough to allow everyone to play. The Gamer Geeks recognized this immediately and the Parent Geeks hinted at it. From a Child Geek’s perspective, an easy game to play means an easy game to enjoy and Candy Grab is most certainly both. It has just enough player interaction to keep everyone involved, but not so much as to make any one player feel targeted or attacked. The mix of action and defense cards is excellent, making certain that players always have a chance to defend their candy or add to it.

There are a few annoying actions in the game that are only forgivable if we view Candy Grab as a game for the Child Geeks. For example, the ability to force the swap of card hands and uneaten candy is exactly the kind of thing you do not want to do if you are trying to win. Hand management becomes a secondary concern and you never really care much about your candy if it can be taken from you. But the feeling of ownership is not fully removed and it stings when your candy is taken. Especially when the stolen candy turns into a wrapper! Every Child Geek understood the significance of that.

I was pleased with the game, finding it to be fast and fun, perfect for the Child Geeks and for the Parent Geeks who played with them. I was not surprised whatsoever that the Gamer Geeks didn’t enjoy the game, as there is very little to it that would appeal to a gaming elitist. For everyone else, Candy Grab should be a pleasant and quick distraction. While the game won’t satisfy everyone’s needs, it does hit a certain sweet spot.