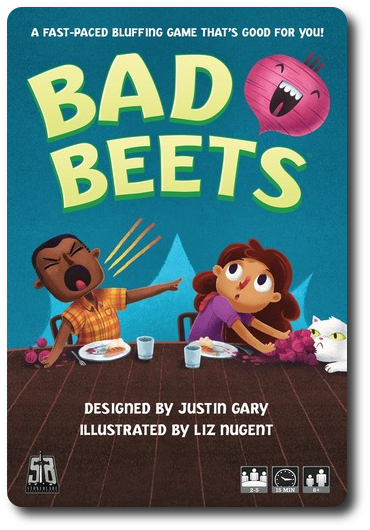 I remember cauliflower being the worst thing in the world. I would scream and cry at the dinner table when it was served. Yeah, I was a great kid. My mom would cover it in sauces, melted cheese, and even attempted to hide it.  No matter how hard she tried, my cauliflower always ended up on the floor. In this game, you’ll be doing the same, but don’t get caught!

Bad Beets, designed by Justin Gary and published by Stone Blade Entertainment, is comprised of 15 Role cards, 50 Beet tokens, 15 Ice Cream tokens, and 5 Action Reminder cards. The Role cards are as thick and as durable as your standard playing card, but the Action Reminder cards are just a bit thicker and rigid. The tokens are made of thick cardboard. Artist Liz Nugent provides colorful illustrations of adorable cartoon kids doing all they can to avoid eating their beets, further strengthening the game’s theme and narrative.

To set up the game, first shuffle the Role cards and deal 1 to each player, face-down. Players can look at their card, but should keep them hidden. Place the remaining Role cards face-down to one side of the game playing area and within easy reach of all the players.  This is the Role draw deck for the duration of the game. Leave room for a discard pile.

Bad Beets is played in turns with no set number of turns per game. A player’s turn is summarized here.

If the active player is taking the first turn in the game, they will need to draw 1 Role card to bring their total Role cards to 2. All players during the remainder of the game will have 2 Role cards in front of them at the start of their turn.

From the 2 Role cards, the player selects 1 to keep and passes 1 Role card to the next player in turn order sequence, face-down. The player who is receiving the card CANNOT look at it until it‘s their turn.

The Action Reminder card lists all the actions the player can take on their turn. The noted actions correlate to the Role cards that the player may or may not have in front of them. This helps new players and those who can’t be bothered to memorize the 5 cards in the game always know exactly what is possible as an action. The idea of the game is to get ride of the Beet tokens as fast as possible and that means players will sometimes have to lie. 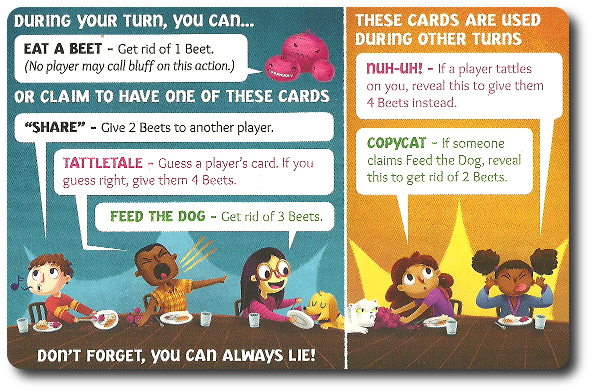 The only actions that a player can take on their turn are as follows:

After announcing the action to be taken, the player needs to pause for about 15 to 30 seconds to allow their opponents to react. There are 2 ways in which an opponent might take umbrage to the active player’s action. Each involves flipping over a Role card, showing it to all the players, and resolving the reaction it provides. 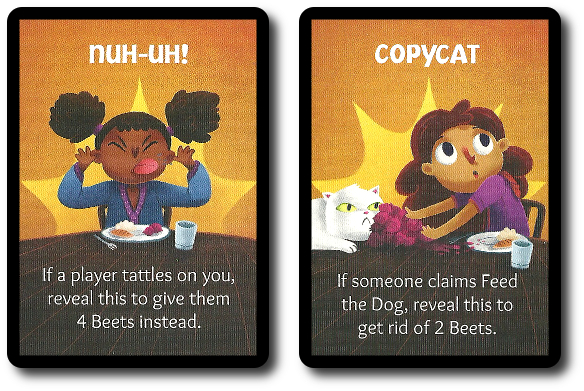 When a Role card is revealed (either during this step or any time during the game), discard it face-up and draw a new Role card, placing it face-down.

After all the reactions have been taken and new Role cards drawn, opponents can now kindly suggest that the active player is lying through their teeth. Unless, of course, the active player takes the “Eat a Beet” action, because who on Earth would willing eat a beet?

Any other action taken is fair game to cry foul on, but players should be careful. If the opponent accuses the active player of having a card they really have, they will be penalized. Of course, if they correctly accuse the active player, they will greatly benefit. Long story short, don’t call a player’s bluff unless you are pretty sure you know what Role card they have.

Only 1 player can bluff another, which means the first opponent to call a bluff is the only one who can for the active player’s turn. This might occur during this step of the turn or during step 3 when the “Nuh-Uh!” Role card is played.

Regardless if the “Nuh-Uh” Role card is used or an opponent just calls a bluff during this step, they must reveal their current Role card, discard it, and draw a new one.

If no one accused the player of bluffing, either during step 3 or step 4, the player DOES NOT reveal their Role card and completes the action they announced. The player’s turn is now over and the next player in turn order sequence takes their turn.

Two different ways to play the game are provided, giving players a choice on how they like their beets.

When a player takes the “Eat a Beet” action, they can point to any opponent and force them to discard their current Role card. The opponent immediately draws a new Role card to replace it. The player can use this special action on themselves, too, if they like, but not before opponents have an opportunity to react.

If the players want a more challenging experience, they can determine the overall winner by playing multiple games back to back. After completing a game, give the winner an Ice Cream token. The first player to earn 3 Ice Cream tokens wins!

To learn more about Bad Beets, visit the game’s website.

The Child Geeks quickly learned the game and started playing it without any issues. Most of the games, however, lasted longer than we expected due to the players always spending time calling each other out. According to one Child Geek, “You cannot trust anyone in this game to tell the truth. It’s best to not believe anyone.” This tactic certainly did work, but not all the time. Beets were passed around a lot and the general level of trust around the table continued to fall. The games did eventually end, as Beet tokens were always being passed back to center, but the game’s length of play was double what we expected. This caused some Child Geeks to get rather bored. As one Child Geek put it, “I think the game lasts way too long when everyone just keeps calling people out.” While a few of the Child Geeks disliked the overall game length, none of them disliked the game. 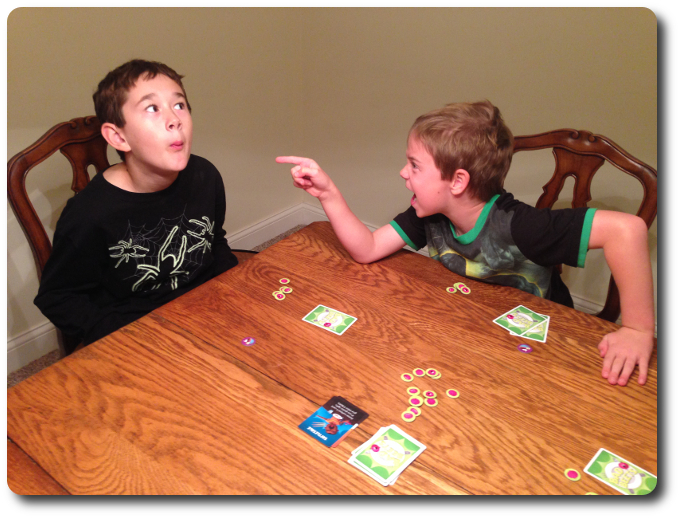 Tempers flared and imaginary beets flew when accusations were thrown!

The Parent Geeks thought the game was cute and enjoyed playing it with their children, but didn’t find the game all that interesting with their peers. The non-gamers and very casual Parent Geek gamers did, but the more veteran Parent Geek gamers found Bad Beets to be too simple. According to one such Parent Geek, “The game is fine, but it just doesn’t excite me. I’m either lying or not; my opponents are lying or not. That’s about it.” But the more casual and non-gamer Parent Geeks felt differently. According to one such Parent Geek, “What I like about this game is trying to figure out who is lying and who is telling the truth. There are even those who are tricking you into thinking they are lying. That’s a lot of fun!” When all the games were over, the Parent Geeks all agreed that the game was great for families, but were split when it came to approving the game for themselves.

The Gamer Geeks didn’t think much of the game, finding it to be too simplistic and lacking depth. They all acknowledge that the need to read other players was not easy and challenging them could be fun, but they also didn’t see why you would ever need to put much thought into it. According to one Gamer Geek, “This is really easy. All you have to do is let small Beet tokens go by and wait until someone gets greedy and tries to push a lot to the center. Then you call them on it.” The Gamer Geeks also thought it was really funny and somewhat game breaking when a player was close to being done and suddenly all the player’s opponents had the right cards to drop a lot of Beets. Which, as you might have guessed, is impossible. Despite the chuckles, the Gamer Geeks didn’t find Bad Beets to be as impressive as they hoped. They all collectively agreed that the game, while not for them, was something they’d play with their kids.

Bad Beets is a great example of a game you can add to your collection and play with just about anyone. It’s perfect for mixed groups comprised of different ages and skill levels. Where it tends to fail is when you put it in front of players who have a lot of gaming experience. Especially those who play much longer, more complicated games like the Gamer Geeks.

The bluffing aspect of the game is fairly limited and one can easily bluff every turn without drawing too much attention to themselves. Things go terribly wrong when the spirit of the game is slightly bent. If everyone thinks everyone is lying, then the game’s speed and fun takes a hit. Of course, it’s a lot of fun when you are accused and get to reveal you’ve been telling the truth, but the overall thrill of finding the liar and calling them out is a lot of fun, too. Fun that is removed entirely if everyone just goes around accusing each other for no real reason. This is not something you can avoid and it really only manifested itself with the Child Geeks and with one Gamer Geek who was being kind of a jerk. Still, watch for it.

I liked the game. I found it to be light with just enough depth of play to keep me interested. You need to watch what is going on at all times, even when it isn’t your turn. In some respects, Bad Beets is like Liars Dice, wherein players need to listen to what their opponents are saying so they stay within the range of plausibility on their own turn. Players also need to determine which opponent is stretching the truth a bit too far. Creates for some interesting moments and many laughs. Do try Bad Beets if the opportunity presents itself. This is a game best served cold or warm with a group of like-minded and devious friends. Disliking beets is not necessary to play, but it wouldn’t hurt.